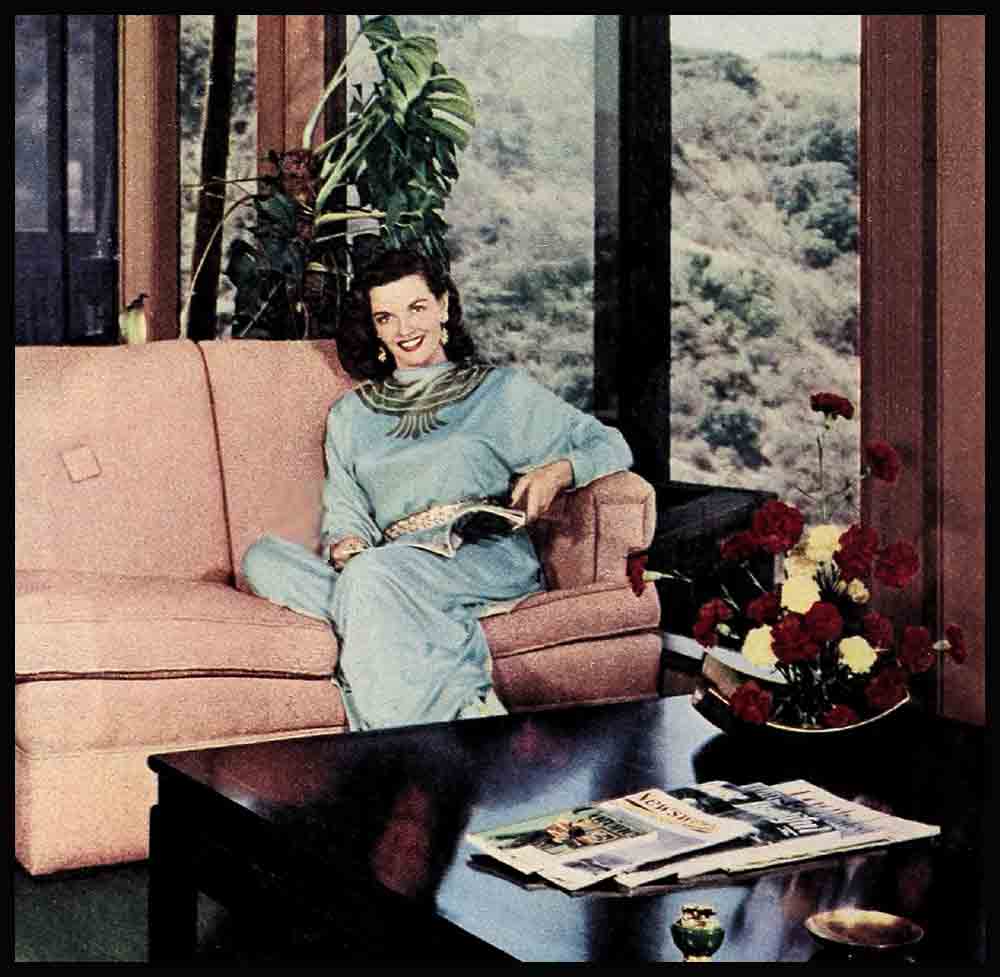 Jane’s house perches, like an eagle’s nest, high among the hills above the San Fernando Valley. It is designed so that almost every room makes the most of the sweeping outlook. Floor-to-ceiling windows bank one wall of the living room. The master bedroom features the same breadth of light and air. Even in the kitchen, windows start at the counter top and extend the length of the room, into the breakfast room. In fact, the only rooms which do not command the view are the den and the guest room, which open onto a small, sheltered patio at the rear of the house.

The site was perfect for Jane and her husband, Bob Waterfield, star football player. The lot’s so high above the road that passersby never guess it is there at all. Instead of leveling the entire pie-shaped lot, they tucked the house against the slope of the hill so that the rear is level with the ground while the front is second-story height and built on stilts. Perhaps I shouldn’t say “stilts,” for the supports are massive walls, all integral parts of the basic design. Also they’re arranged so that Jane and Bob can use this area for outdoor living. They put a barbecue grill in the open section of three supports, each a third of a circular pillar, with space between the thirds. A bar is built under the rear of the house, well shaded and protected. So are the dressing rooms. Unorthodox? Yes, but so is Jane!

Swimming in their pool is like swimming on the edge of the world. It’s at the front of the lot, and the grapestake fence around the property curves down to about a foot in height at the front, so that when swimming around the pool, you still have the superb view to enjoy.

It would be nice to be able to say, “You, too, can have a house like Jane’s and Bob’s,” but such is not the case. Your house should fit you and not Jane and Bob Waterfield. But certainly there are ideas you can adapt to your own home.

To get the house she wanted, Jane worked with an architect. Is she pleased with the results? Well, you can tell when a person is happy with his home by the way he discusses it.

“How did the architect know so well what I wanted?” she said. “He’s Kemper Nomland Jr., and We went to school together. I told him my ideas, worked them in squares, and he gave it design.”

You can’t see much of the house as you approach up the steep driveway, until suddenly, there you are by the carport. It’s under the kitchen, and the entrance to the house is at the left. Hardwood steps wind up to the entrance at second story level. From the ground, however, you don’t see the entrance, just the plain redwood exterior, stained deep brown.

Most homes feature a heavy wooden slab for a front door, with solid walls on either side. Usually they’re needed for privacy, but since the stair-well prevented a vista into the house, Jane specified glass for the front door, and glass walls on either side. You look right into the house, but all you see are the gold-leaf-covered walls of the entry hall, a plant box to the right, and opaque glass above. As you face the front door, the living room is completely concealed by a wall.

One of the primary objections to modern home designs is that they’re stark and cold. That isn’t true of Jane’s and Bob’s house, largely because in the decorating Jane worked out a theory of her own.

“I wanted a modern house,” she said, but I wanted it to look aged, about a hundred years old. That’s why I chose dark colors, both inside and out. That’s also the reason for my Chinese pieces. They’re so simply styled they fit beautifully into a modern setting, yet they have an ageless quality.”

The living room is almost rectangular, with the dining area jutting out about three feet. Green broadfelt carpets the entire floor, but eventually Jane plans to use wool chenille in a gray to match the combed plywood walls. When asked what the wall color is, Jane laughed. “That’s ‘pouf’ umber,” she said. “My own concoction, a combination of raw umber and burnt umber.”

Jane likes beamed ceilings, but the architect said no. She persisted, however, and consequently, free hanging beams cover the living-room ceiling. They’re about ten inches thick, and are suspended from the ceiling with small iron rods. They carry the brown color of the exterior into the room, and make a nice pattern against the gray ceiling.

Guests talk most about the fire pit, opposite the windows. It’s a sunken section of the living room, three steps down; a modified rectangle, ten feet wide at one end, six at the other, and about fifteen feet long. Two sofas fit snugly into the front and side, their backs level with the living-room floor, Built-in cabinets support lamps and offer storage space, and a plant box juts into the area between one of the sofas and the steps. Palos Verdes stone comprises the entire wall, echoed by slate on the floor, and focal point of the area is the five-foot open fireplace, enclosed by an outside brass fire curtain.

With the built-in sofas, Jane and Bob felt they should keep furnishings at a minimum. The fewer tables and chairs that take up floor space, the more you have that feeling of lightness and spaciousness. All the sofas are upholstered in gray-beige cotton boucle, and the lounge chair in brown cotton boucle.

Though the dining area is part of the living room, its floor is about six inches higher than the living room, and a plant box divides the two areas, perpendicular to the window wall. Following the Chinese motif, Jane’s dining group is of teak-wood, the seats upholstered in the same gray-beige used elsewhere.

All accents in the living room are gold, in picture frames, in gold wash trim for the lamp bases, in vases, and dinnerware. For a change she specified silver, combined with gray, for the adjoining master bedroom. Ultimately both spread and headboard will be of gray velvet. And large gray cabinets will serve as bedside tables, the gray finished off with rubbed silver.

From the somberness of the master bedroom, Jane went violently colorful in her dressing room. Let rooms that you occupy only a few minutes at a time be outrageously gay. Jane’s dressing room combines purple and pink.

In a guest room, too, you can be more extreme in your scheme, because it’s lived in only for short periods. Here Jane used royal blue and pink, with accents of white. The blue’s on the walls. The pink is on the ceiling, in the cotton shag carpeting, the chenille spreads on the twin beds, the sill-length raw silk draperies, even on an old Victorian lamp table.

Whereas everything else in the house is simple and modern or Chinese, the guest bedroom goes in for frou-frou. The Victorian rocking chair, and the lamp that stands beside it are in white wicker, the latter styled after a birdcage and filled with dried flowers and pods painted pink and white. A little white wicker birdcage, filled with the same flowers, hangs next to the chest and the final fillip is provided by white rococo sconces on the walls.

Jane’s color schemes are simple, with not over three colors in one room. One color dominates, a second is used in the proportion of about one-third and the third strong color is for accent only. Neither does she feature a print, but relies instead on texture for interest.

The one exception is the den. It stands in back of the living room and uses the same massive stonework for a fireplace, slate for the floor. At the windows, Jane hung heavy cotton draperies which feature a red and green pattern on brown ground. And a second pattern is in the heavy Navajo rug in black, gray, white and red. Furnishings are simple, a red leather chair, a green leather sofa, end tables, a desk and a television set. One wall houses Bob’s football trophies, and a second wall is devoted to books.

What about music? A corner of the master bedroom, next to the living room, is allotted to that. It looks like a large closet. In it are built-in radio and phonograph, with shelves for record storage.

When you build a house that’s designed especially for you, it’s essential that you consider and make provision for every aspect of your life. Jane loves to paint and enjoys many hobbies. There’s a tremendous room off the kitchen, a service room, containing washing machine, dryer and mangle, with cupboards for mending and ironing. But it’s also a hobby room for Jane and Bob. A counter extends around two sides and over half of one wall is devoted to cupboards, closets and drawers.

For Jane and Bob the house is practically perfect. They can’t think of a thing they would change. Because they thought ahead, worked out their ideas on paper and mulled them over before making them into actualities, they achieved the results they wanted. “How happy can you get?” they ask. And they mean it!