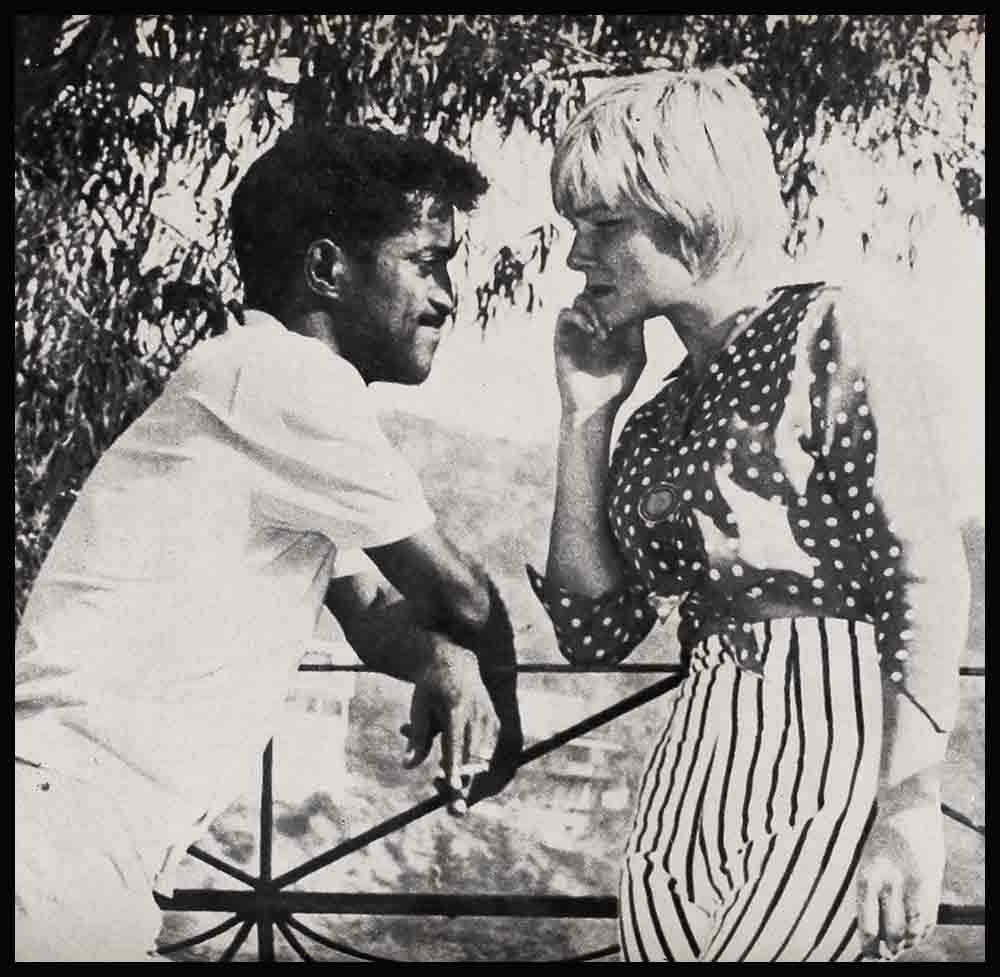 “How Sammy Changed Me As A Woman?”

May was talking about her marriage to Sammy Davis, Jr. which is rapidly approaching its third anniversary. It is a marriage different from any marriage in the history of Hollywood, and yet, paradoxically, it is not unlike any successful marriage, as we will find out from the very people who are most involved in it—May and Sammy.

“I have never been more happy in my life than I am now,” May related. “I feel the way any woman should feel when she has found love and happiness and protection in her marriage. It’s hard to find words to describe our wonderful way of life.

“As a wife and mother now I feel I am fulfilling my destiny as a woman.”

When Sammy and May became man and wife on that memorable November afternoon back in 1960, their wedding was surrounded with controversy—intense controversy inflamed by a segment of humanity which does not have the decency and tolerance and understanding that God wants his children to share.

It made no difference to Sammy—nor to May—that some people were going to try and make life untenable for them. All that mattered was that they had their own deep and abiding love and absolute understanding of each other.

Yet, as May and Sammy would learn in time, for every one of the hate-mongers who engaged in the practice of hurling invectives at them, the world was prepared to send forth a thousand good people who harbored understanding and compassion.

When Sammy married the statuesque honey-blond actress from Sweden, he had a large coterie of friends and supporters in his corner—people like the sister of President John F. Kennedy to the Duke and Duchess of Bedford—who were at the wedding. But despite this buttressing, the road ahead was not paved with any assurance that he and May would encounter smooth riding.

If anything, the Outlook was grim. Hate letters, threatening phone calls, countless other harassments plagued the newlyweds. Yet . . .

“I didn’t care how bumpy things got for us,” May said. “When I married, I knew my career would be out the window anyway (20th Century-Fox dropped her). You can’t very well be a career woman and a good wife and good mother. And when I became Sammy’s wife I wanted more than anything in the world to be a good wife and mother.”

Today May is both.

As a wife, May is supremely wonderful, an adult woman who has contributed love, understanding and sacrifices to make her marriage work.

As a mother, she is unsurpassed, too. There are two children—a daughter, Tracey Hillevi, nineteen months old, who was born to Sammy and May in Cedars of Lebanon Hospital, and a son, Mark, two and a half years old, whom they adopted last year. And soon, they plan to adopt another child.

Indeed, marriage has made a big difference in the life of the glamorous May. She has lost her inhibitions and “idosyncrasies.”

“Since I married Sammy,” May confided, “I have found a whole new world for myself. I’m no longer shy and aloof. At first, it was difficult to adjust to Sammy’s kind of life, the gay and cosmopolitan existence. Even when we first started to date I was reticent about meeting people and being with them. I had never been exposed to Sammy’s kind of life. I hadn’t wanted it. I was a performer and I worked hard at it. When I was finished after a day’s work at the studio, I wanted more than anything to get away from people.

“I used to get invitations to parties and dinners, but I seldom accepted dinner invitations and almost never went to parties, simply because I hated them.

“But once I began to go with Sammy, things changed. My outlook became different. Being around Sammy, the swinger, was like being on a merry-go-round. I simply had to meet people when I was with him—he has so many friends.

“So I met his friends and they became my friends, too. I liked it very much.”

The mad, mad whirl continued even after May and Sammy were married, but then very soon the stork announced he’d be dropping in on them.

The joy of impending motherhood and fatherhood was tempered somewhat by medical complications. May’s pregnancy was not an easy one.

“I was told almost from the beginning that I might not be able to carry the baby,” May explained. “I was terrified. I wanted to have the baby, more than anything. I wanted the baby for Sammy who has such a tremendous love for children.

“Sammy has always had a soft spot in his heart for youngsters. He was forever collecting baby pictures. It didn’t matter whose baby it was—it might have been a friend’s or just someone who dropped in to see Sammy in his dressing room. That’s the way Sammy is—he’s simply crazy about children.

“That was why I was so afraid of losing the baby. I knew it would break not only my heart but Sammy’s. Fortunately, there was a way to save the baby. I would have to stay in bed. I didn’t know how long at first, but it didn’t matter to me so long as I could have the baby. I stayed in bed three months. It wasn’t easy, but think of those mothers who must spend all nine months of their pregnancy on their backs.”

May gave birth a month prematurely, but it was an easy delivery. The baby weighed seven pounds seven ounces and was beautifully formed.

Long before they brought Tracey Hillevi back to their elegant home above the Sunset Strip, May and Sammy had decided their baby would have the best of everything—education, training and upbringing.

Once the baby was home, May and Sammy had to cut down on the social whirl because May wanted to devote all the time she could to Tracey.

“We both changed after Tracey came home,” May said. “Sammy slowed down considerably, and I did, too. Of course, we didn’t lock ourselves out from the world. Far from becoming hermits, we kept our friends. But we didn’t see them as often.”

Life for May and Sammy took on new meaning and brought them a far greater happiness than they had ever known.

“We were together much more often after the baby,” May said. “I found real fulfillment as both a wife and mother. I felt a new warmth for Sammy as a husband and a human being.

“And—this is what pleases me so greatly—Sammy found that I changed, too. I became more relaxed and less inhibited. The problems of intermarriage that Sammy had warned me about at the beginning—and which I had seen right along—seemed suddenly to fade away.

“The threats we used to get all at once died down after Tracey was born. Before then it was terrible. Five or six a night, every time Sammy appeared in a club. The hate letters got so bad, Sammy hired a bodyguard.

“Sammy used to say to me that we might be bombed out of our house, and he wanted to put Tracey in a nursery rather than bring her home. But this was not the solution. I told Sammy that if they want to bomb us, they’ll have to do it to all three of us.

“Yes, marriage to Sammy has meant greater courage for me. And for Sammy as well.”

May Britt’s marriage has meant other things, too, things which have wrought profound changes in her as a woman.

“Sammy also has enabled me to gain a new sense of values, to cherish the little things in life which are so important but which I took for granted before I met him.”

Marriage for May and Sammy was more beautiful than ever with Tracey, and so they decided it would be nice for the little girl to have a big brother to play with. They chose to adopt a child and consulted the Los Angeles County Adoption Service.

“We had considered adopting in Mexico City and in England,” May said, “but once we saw little Mark we knew that he would be the one. I was as thrilled as Sammy over the way it all worked out so well. I was particularly happy that the child we chose was a Negro, because if people like us don’t adopt these unfortunate little waifs, I don’t know who will.”

Now May and Sammy are looking forward to their third child.

“It shouldn’t be too long,” May promised. “If I don’t have another baby, you can be sure Sammy and I will adopt one. I have given myself completely over to the children, as I have to Sammy, and I don’t ever want to change. The children and Sammy are my whole life, everything else is secondary,” May said contentedly.

“Love does strange things and it has affected me so very much that I am completely domesticated. Such a far cry from the glamour and excitement of film-making. But that is behind me—at least for the time being. If the opportunity to make a film were presented to me sometime in the future, I don’t know if I’d go back.

“What really matters to me now is that I am supremely content as a housewife and a mother. Being married to Sammy and sharing the responsibilities of bringing up children has made me grow up some, too. I feel much more mature today than I did a year or two ago.

“Life with Sammy has been so rewarding, and if I sound repetitious it’s only because I fail to find words to express my feelings differently.

“I won’t mislead anyone by saying that our marriage is so perfect that it is without its little problems. But that is exactly what they are—little problems.

“I have most of my trouble with Sammy at dinnertime. I wear my fingers to the bone, if you don’t mind a trite expression, preparing the meal. Then he’ll phone and say he’s been delayed because the picture is shooting late or he has an important last-minute engagement.

“That’s when I get upset, because I want my husband to eat on time. I can’t stand to serve him cold or warmed-over food. I know why that is. Not because I have any great ego as a cook. The only reason is that I care so much for my husband that I want everything to be perfect for him.

“Maybe in time I’ll not get so angry. But for the present, that’s one area in which Sammy hasn’t changed me as a woman—at least, not yet.”

May and Sammy seem to he blessed with the cherished gift of contentment and full family life that both prayed for when they became man and wife nearly three years ago. Life together has brought them as close in body and spirit and understanding as any two people can be. They have hurdled the rough spots like thoroughbreds and left the tangle of tribulations far behind. They are out on the green flats now, where the ride of life promises to be smoother and more serene.

May Britt, a zealous wife and loving mother, is a different woman today than she was three years ago.

And Sammy is a different man.

We shall see next month just how different Sammy is—how May Britt changed him as a man.