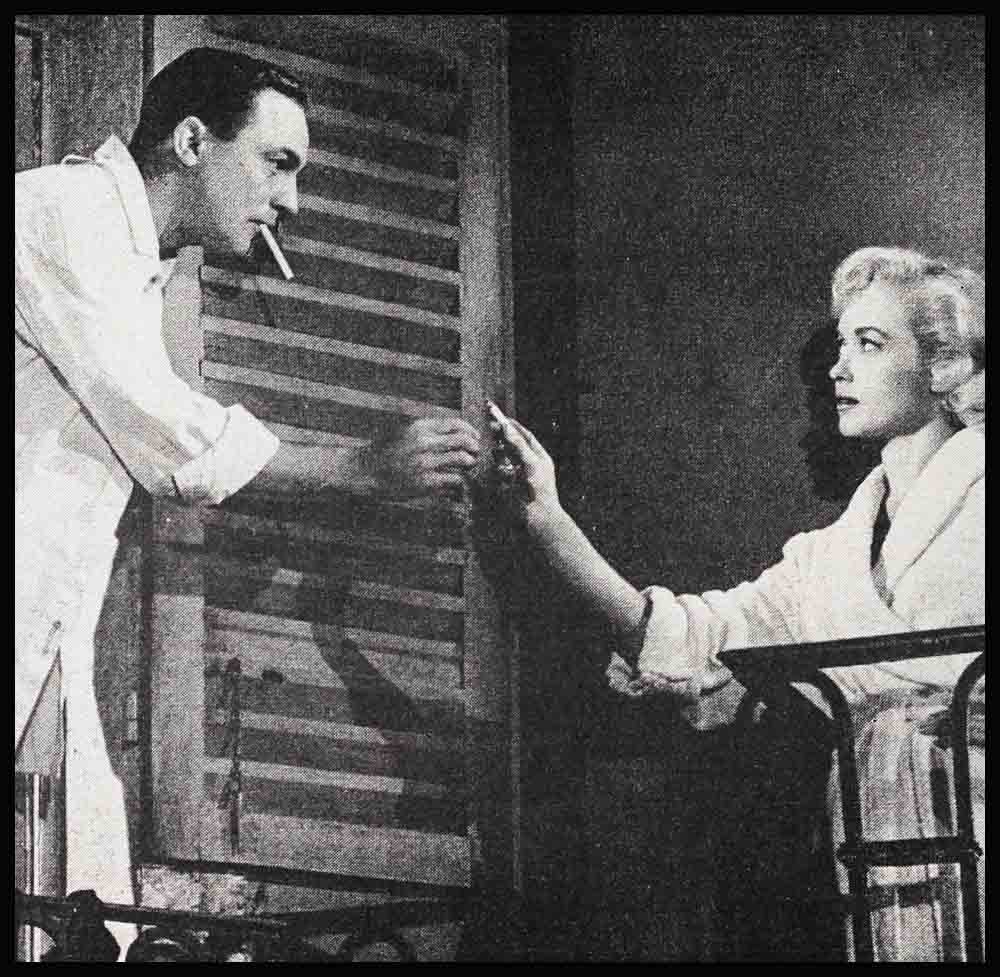 The Saga of Satchmo (U-I)

More than just a record of Louis Armstrong’s triumphant travels, this is also a close-up of a vital personality and an exciting concert, alive with the rhythms of classic Dixieland jazz. The music of Armstrong and his men is welcomed by the Swiss, the French, the English with foot-tapping enthusiasm or solemn concentration There are extra thrills on Africa’s Gold Coast, when Louis believes his ancestors lived. In every action, in all the facts about himself that he gives to producer Edward R. Murrow, “Satchmo” comes across as a happy man, widely respected and enormously successful in work that he deeply loves. Family

Back from France comes producer-director-star Gene Kelly, with a honey of a movie that combines hear hilarity and good sense. As a brisk American businessman in Paris, a widower, Gene has put son Bobby Clark in a Swiss boarding school, but the kid makes getaway, intent on joining his father. Along with him goes Brigitte Fossey, whose divorcee mother, too, is in Paris. While Gene and Barbara Laage team up to find their children, the runaways breeze across country, aide by French youngsters. In a choice sequence, they’re chased by an entire NATO force, under the command stuffy Britisher Michael Redgrave. Both children are charmers, entirely natural. Family

Though war is the dominant background, here’s a tender, warm-hearted film, centering on the havoc among innocent by-standers. Rock Hudson has the deeply sympathetic role of Colonel Dean Hess, who lived this remarkable story. As Hess, Rock is a World War II flyer who accidentally bombs a German orphanage. A preacher in civilian life, he can’t go back to his vocation with a clear conscience, even with the encouragement of wife Martha Hyer. Recalled to active duty in Korea, be becomes involved in the fate of orphans, victims of the fighting. The lovely Indian actress Anna Kashfi (seen in “The Mountain”) plays a Korean girl who has the aid of ancient Philip Ahn in caring for the children. Dan Duryea and Don DeFore are “tough” Americans. Family

Any woman whose man has ever gone off to war feels that he has had an experience she can never share or even understand. Direct, honest, full of tension, this picture gives her a chance at least to imagine what might have happened to him. In the bitter days of 1950, during the UN retreat in Korea, Lieutenant Robert Ryan’s infantry patrol is cut off. He is America’s typical “civilian soldier,” thoughtfully trying to do his duty. As a sergeant the patrol comes upon, Aldo Ray is the traditional fighting man, operating surely on instinct. No characters are obvious, yet not one has to be explained. You know them by their actions and words. As Aldo’s beloved colonel, speechless and almost helpless from battle shock, Robert Keith is impressive. Family

In a knockabout romantic comedy, Susan Hayward and Kirk Douglas are a handsome pair. Susan’s a news-magazine big shot, annoyed because her choice for a top atomic-energy post got the government go-by. So she’s out to ruin Kirk, though this Army general has an outstanding record. Little dictators in their separate fields, Susan and Kirk become the conventional warring lovers, as she tries to trap the general into undignified poses, to be shot by her candid photographer. There’s expert support by Paul Stewart, as Susan’s too-perceptive second-in-command, and Jim Backus, as Kirk’s befuddled public-relations officer. But the two stars, accomplished in dramatic roles, seem ill at ease when they’re asked to clown, going at their antics with the determination of good sports. Family

Alan Ladd makes a fine, dependable hero in a Western that follows a sensible course through post-Civil War history, Leading a cattle drive to Missouri, Alan, along with fellow Texans, gets gypped by dealer Anthony Caruso on the sale price. But, in partnership with ex-drunkard Edmond O’Brien, Alan develops a counter-scheme. He will bring the Texas cattle to the rich grasslands of Kansas, where a new spur of the rail-road may pick them up at a new town. Buyers gather to bid for the herd at fair prices—only to be terrorized by Anthony and his henchmen. The romantic angle is handled in a properly subdued manner, as Virginia Mayo turns from railroad tycoon Don Castle to the dashing Texan. Little David Ladd does an appealing debut in his dad’s picture. Family

In terms of selflessness and service to humanity, the subject of this movie biography may be the greatest man of our times. Ranging from Europe to the heart of Africa, this straightforward documentary is done with great feeling. A little boy (the only “actor” in the cast) shows how the young Albert may have reacted to the infinite possibilities of life. Touching family photos re-create his background, but the splendidly alive face of the venerable Dr. Schweitzer himself dominates most of the picture. The daily routine of his hospital deep in French Equatorial Africa is shown in sharp detail, with all its hardships and brave improvisations. As an astonishing accompaniment, there is the doctor’s profound devotion to music, philosophy and religion. Family

Without stinting on action, here’s a Western that also plays up character, contrasting three brothers. In effect, steady Fred MacMurray is father to the two younger boys: Jeffrey Hunter, sensitive, cautious, therefore accused of cowardice; Dean Stockwell, rash and thoughtless. A range war between cattlemen and farmer squatters tests the mettle of all three. Romance also divides the brothers, as Janice Rule tires of waiting for Fred and turns to Jeff. The acting is generally earnest, though Josephine Hutchinson doesn’t look quite old enough to be Fred’s mother, and Stockwell, once an excellent child actor, seems here to be doing a distasteful impersonation of the late James Dean. Family

Bitterness and threatened violence seething in the South just after the Civil War keep suspense high. For personal reasons. Jeff Chandler feels a sense of dedication when he takes over as “occupation officer” in a hill town once ravaged by Sherman’s men. Joanne Dru hates him because his conciliation policy leads to the lynching of her pro-Union father. As Jeff’s young aide, John Lupton also urges that he get tough. In his desperate campaign to rebuild the wrecked, starving town, Jeff is secretly opposed by Ronald Howard, as a fanatic who won’t admit that the Confederate cause is lost. Brilliant photography points up the drama. Family

Supposedly set in the present day, this suspense movie actually harks hack to the early Thirties, when Dillinger-style bandits hogged the headlines. On his honeymoon with Colleen Miller, unemployed reporter Leslie Nielsen decides to get his job back through an exclusive interview with bandit Robert Wilke. The enterprising newsman winds up as captive in the gang’s Ozarks hide-out, dominated by crazed gunman Paul Richards. Family

Above Us the Waves (RANK, REPUBLIC)

With some of their top stars, the British present a matter-of-fact, often suspenseful account of a mad World War II venture. Officer in the submarine service, John Mills promotes a daring scheme for destroying the German battleship Tirpitz, which has been preying on Atlantic shipping. Human torpedoes, each driven by two men, will be launched into Germany’s inland waters. Bad weather defeats this plan. whereupon Mills puts through another: midget subs, from which frogmen can emerge to attach explosives to the Tirpitz’ keel. He commands one; jaunty John Gregson and earnest Donald Sinden take the others. As simple physical action. it’s an exciting yarn, but even good acting can’t individualize its people. Family

Tony Curtis draws a doubtful role here, as the social-climber “hero.” In flight from Chicago’s slums. he gets a job as bus-boy in a swank western resort. His deceitful romance with icy heiress Martha Hyer is obviously headed for disaster. Oddly, Tony slights Martha’s impish kid sister, who knows all about his lowly status and still likes him. In this part. Kathryn Grant provides the movie’s brightest moments, with her hoyden charm. still determined, Tony turns gambler with notable success and gets into the big time when he teams up with a smooth old pro, shrewdly portrayed by Charles Bickford. Though Tony also accepts the backing of a notorious racketeer, he’s awfully slow in realizing the illegal nature of his business. While Tony isn’t actually presented as a heel, you feel that this is really not the kind of role that he can play most convincingly. Adult

Here’s a good, fast Western, with no nonsense about it, with no fancy pretensions, but with plenty of shooting and galloping. Gunslinger Rory Calhoun, feeling a belated urge to settle down, accepts an offer to manage a ranch that is practically under siege. Ruthless Ray Teal wants to take over and break up both the big ranches in this section, promising his henchmen parts of the land. With pals Paul Langton and Max Baer, Rory defends the ranch where Susan Cummings lives, also the neighboring property. Family

Wicked as They Come (COLUMBIA)

Told dead-pan, this is the story of a femme fatale. Arlene Dahl schemes her way out of New York’s slums by winning a beauty contest, with a trip to England as the prize. While TV producer Phil Carey looks on sardonically, she lines up as victims photographer Michael Goodliffe, then tycoon Herbert Marshall, then his boss, Ralph Truman. When she’s in mortal danger, Phil comes to her rescue, understanding that a teen-age experience has twisted her outlook. Adult

Spectacular backgrounds, from Aztec ruins to the magnificent campus of the University of Mexico, keep the eye pleased throughout a supernatural-style thriller. Reporter Steve Forrest, covering an archeological expedition headed by James Robertson-Justice, is skeptical when the scientist suggests that the Aztecs’ panther god may still wield power. But any mention of sacrifices to the god terrifies Liliane Montevecchi, descended from its worshippers. Suitably scary at times, the picture is slow and wordy at others. Family