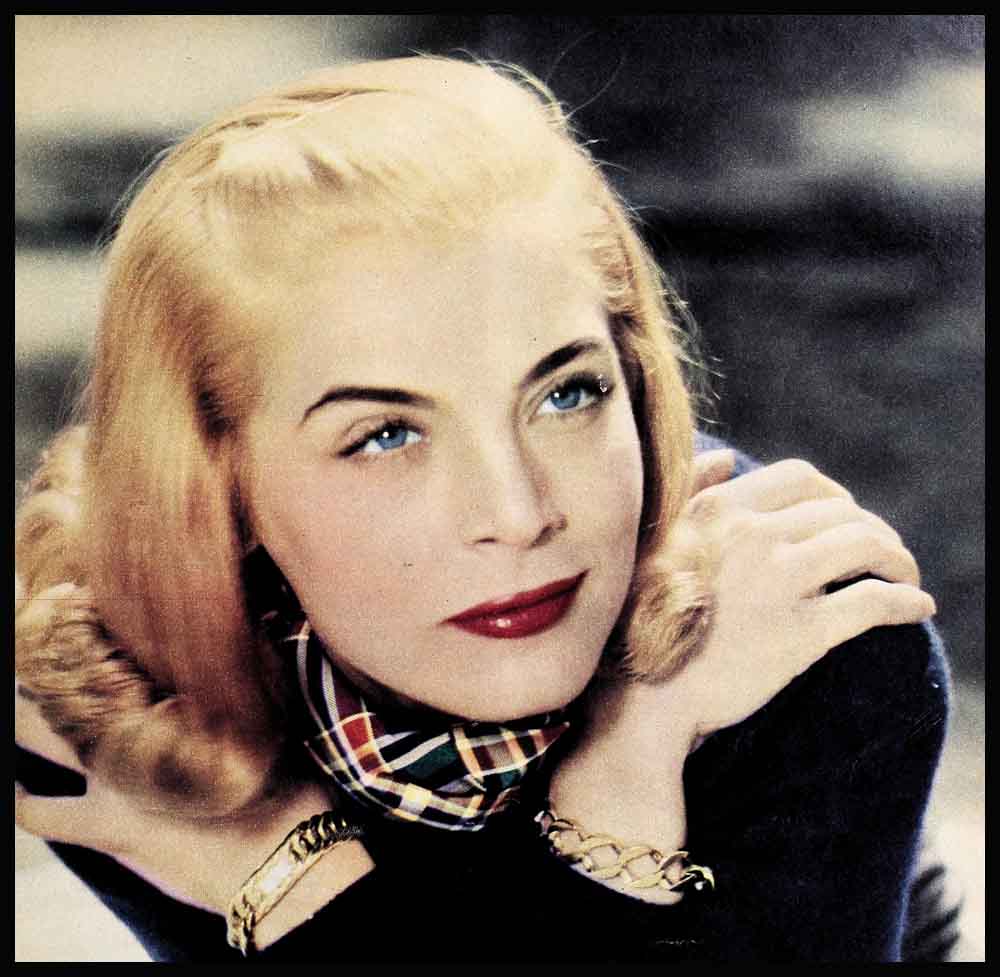 I was leafing through my old and battered copy of “Alice in Wonderland” the other day when a cancelled check fell out and lay at my feet. There on the top line was the date, May 14th, 1933. At the bottom was my father’s signature in his firm, elaborate handwriting. “Pay to the order of the Mother Superior, $1.25, signed John Matzo,” read the check, drawn on the Pine Brook Bank of Scranton, Pa.

I picked it up and, standing there in what is definitely the smallest apartment in Hollywood, I felt again the presence of the black-robed nun tapping out the rhythm for a small girl seated at an old piano, running the scales. I wasn’t Lizabeth Scott then. I was that small girl, a kid named Emma Matzo. And I had just handed the Mother Superior of Marywood College this same check in payment for my weekly piano lessons. I was eleven then and I was “willing” to be a great pianist. I was also willing to be a great writer, or a great painter, or a great anything else. I didn’t think of these accomplishments in mercenary terms. I wanted glory. I wanted beauty. And I was terribly, terribly discouraged. My life—all eleven years of it—was whirling by me and I was accomplishing nothing.

Have you ever known that depressed, almost suicidal mood? I’m telling you— hold tight to your dreams, keep studying, give yourself a chance to grow up. Things work out. But I warn you, there is one quite bitter price you must pay for any eminence you may attain.

You learn to accept jealousy and envy. You learn that over the lustre of your success there must fail occasional hateful shadows. Sometimes those who have stood still will try to twist the achievement of someone and make it look unattractive.

Does anyone ever think of himself as average? I certainly didn’t. I was in the clouds or the depths about myself always. Now I realize that you could find a million other little girls in the United States who are exactly what I was then; the fiercely ambitious, restless, very Americanized daughter of old-world parents.

I was the first-born of six children. Two years after me came Marsha, then John, then Eileen, then Justine, and finally my baby brother, Austin.

Father was a grocer. He owned the two-story brick building where we lived, our flat upstairs, the grocery store below. Naturally we always had all the food we wanted in lavish variety.

Our family was religious. One of Mother’s sisters was a nun, her brother a priest. We all had to go to Mass every Sunday and confession once a week. Mother saw to that, and it was quite something getting the gang of us dressed for church. Later, when I became a model for Harper’s Bazaar, I realized how much training for it I had unconsciously received from my mother. For she always had lovely taste in clothes. She insisted upon our being very neat, even though we were robust, active kids. And while we were permitted “dates” we had to be home and in bed by ten, school nights, and ten-thirty on Saturdays and Sundays.

We were not demonstrative and we still aren’t. We never quarreled but we all led separate lives. As a child I spent a lot of time with my Aunt Penny. I still see her whenever possible, and enjoy making publicity trips to the East so that we can be together again.

In all my dreams the thought of acting had never intruded. That was because I was such a little mental snob. I was “above” going to the movies, and rare indeed was the stage play that invaded Scranton. I read everything I could get my hands on, but my preference was biog raphy. Looking back, I am sure that I was as humorless and solemn as a small owl, but one bit of pure enjoyment I did permit myself. That was “Alice in Wonderland” by Lewis Carroll—and I’ll bet I wouldn’t have relaxed into that much fun f| I hadn’t known it was a “classic.”

Perhaps you remember that Charlotte Henry came out in a Paramount version of “Alice in Wonderland.” I condescended to let my Aunt Penny take me to it. I walked in, a girl who was willing to be a famous writer, musician or artist. I floated out, knowing I must be a star. Only not a movie star. I must be the most important star the stage had ever known. Meanwhile I would absorb some acting technique through mere motion pictures by going to them constantly. That is how I happened to see Deanna Durbin. I nearly died of jealousy. There she was, singing like a glorious lark, and where was I, who was somewhere near her age? I was nowhere. It was agonizing.

I immediately decided that I, too, had to be a coloratura. My poor parents! I besieged them the very next morning for the price of singing lessons, and as soon as I got it, I went hounding music teachers.

Marywood was no good for me, for the Sisters were fine musicians, and they told me I was a contralto. It took me five teachers before I discovered one who said, yes, I could be a great coloratura. I bothered little with scales. Practically from my first lesson I was singing “II Baccio,” which I had heard Deanna sing. I practiced like mad. I screeched at the top of my voice. The trouble was that I, too, had ears. I could hear myself.

By this time I was in Scranton’s Central High School. I wasn’t top of my class, but I was fairly bright, with grades that averaged between eighty-eight and ninety-three. I belonged to the debating society. I took elocution lessons on the side, but try as I would—and I tried again and again—I never got into a school play until my final year. Even then I didn’t have much of a part. This “slight” would have been too devastating if I hadn’t had compensation in the form of a very glamorous boy friend at that time.

The letters we used to exchange, my “love” and I. He would write me a long intellectual letter and I would reply with a longer, more intellectual letter, writing with the dictionary beside me, hunting out five-syllable words. I recall an elaborate correspondence we once had over Japan. He disapproved of Japan for its politics. I wrote back and praised its “culture.” I argued that it was such a gentle country, full of such gentle people who just puttered around with the arts. It serves me right that I had to worry myself sick about my brother John in the navy in the South Pacific during the war.

Yet, somehow, this romantic correspondence gradually dwindled into nothing. To this day I am not good at correspondence. I either write volumes or nothing.

My mother entirely disapproved of my entering dramatic school. She was afraid of the theater. She recoiled from what she believed a girl “had to do” in order “to get ahead.” She wanted me to go on to college—and I presume her eventual ideal was that I should marry, settle down and raise the same kind of sturdy family that she had raised. Well, I hope I shall do the latter someday.

What I actually did then was to secure a summer engagement with the Mae Desmond stock company. Bad as I knew myself to be, it spurred me on more than ever. When autumn came, the family allotted me a $16.50 a week allowance. My tuition of $750 the season was paid at the Alviene School of the Drama. It was up to me to live on the sixteen-fifty per. My family hoped this sum would discourage me sufficiently to move back home.

But I made it. I lived at what was called a “girls’ Residence” up in the Eighties— a kind of theatrical boarding house, packed with girls as ambitious as I. I had a diction teacher, who disapproved of my voice because she thought it was too husky and much too low. She told me to use my “head tones” and from September to November I went around speaking completely artificially Most of the girls at the “Hall” stopped talking to me and I finally got it—it was that phony voice.

I was awful at dramatic school. I was so ambitious that when I got a part in one of the plays, instead of analyzing it, I just sat down and memorized the whole thing in the course of an afternoon.

But how I worked! only had five dates the whole nine months of that first year—and I’m sure I bored those boys speechless, for I talked of nothing but my work. When school closed, I went back home for a month, but by midsummer I was back in New York again, hunting a job. The family, still trying to discourage me, cut my allowance to $10.00 a week, but I moved into the tiniest room in New York. It cost $6.50 a week. I ate, paid carfare and dressed on the $3.50 balance.

But, as the song has it, there isn’t any business like show business. And finally, after miles of walking, hours of waiting in agencies and manager’s offices, I did land a job in “Hellzapoppin’.” I was making an actual whole $50.00 a week—but you can imagine what it did to my mental snobbery to be in what was glorified burlesque-vaudeville. I tried to give notice after a week, but I had signed for a year and I had to stick.

Now I am so grateful. I toured every State of the Union with “Hellzapoppin’.” And I learned about timing—about humor—about real audiences—and I learned what wonderful, vivid, un-snobbish people real troupers are.

When our road tour was over, I was too proud to write home for money and I would have starved if I hadn’t started modeling for Harper’s Bazaar. Then becoming Tallulah Bankhead’s understudy in “The Skin of Our Teeth” seemed the sure way to fortune. It was—in a circuitous way. Through a combination of circumstances, I was brought to the attention of Hal Wallis and signed to a contract by him.

That has been told and retold, but what hasn’t been printed before are those certain bitter lessons I was forced to absorb—and which I tell all you ambitious ones you might as well learn to absorb, too, if you really want to scale any heights.

Now, here’s an illustration: Last spring, when I was East, I invited my mother up to New York to stay with me at Fifth Avenue’s Gotham Hotel. We had a glittering time, shopping on the Avenue, seeing all the shows on Broadway, dining in the most luxurious places. But what happened when my mother went back home? People said to her, “What’s the matter with your daughter? Why didn’t she come here? Is she too good for Scranton now?” Thank goodness this is a minority opinion. One of my proudest possessions is a letter from the Scranton City Council wishing me well in my career, and one of my keenest desires is to be able to get enough time to return home for a prolonged visit with my friends and family. Actually, I’ve made five pictures in about two years. That doesn’t permit much time for vacation away from Hollywood.

However I am learning to laugh without losing my sensitivity, my ideals, my basic love of people. To work and to be above pettiness. Yes, I think I’ve learned that. At least I know I’m working at it.

Now do you see why I asked, “Don’t Misunderstand Me”?