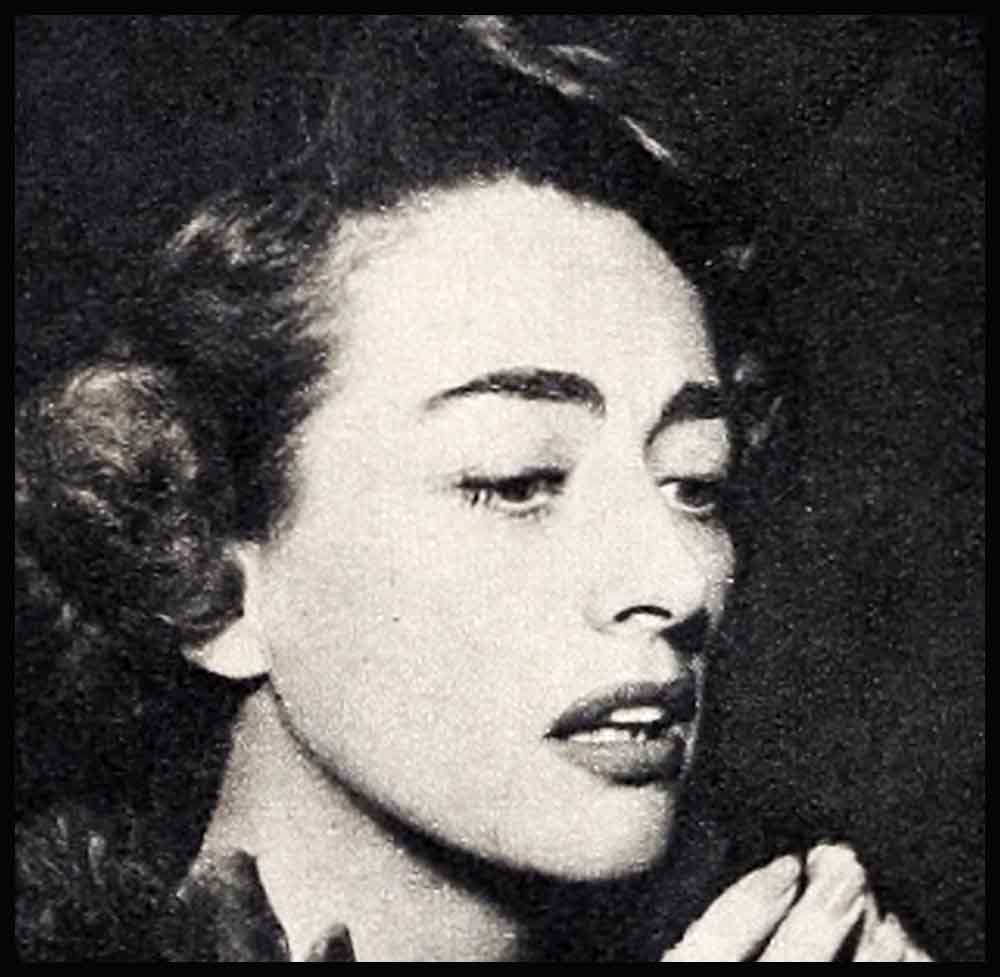 I’m looking at a statistic which says there are 77,600 more single men than single women in Los Angeles. I don’t believe it. Unless they are all bunched downtown in L. A., leaving Hollywood an arid female desert where girls outnumber men, a dime a dozen. It’s the only way to account for so many dolls at so many parties without hide nor hair of a male beside them. Especially in the upper echelons of movieland. Fine for the men. Revolting for the women.

Rita Hayworth, for instance, was as lonely as her last audience, before Prince Aly made with the sweet talk for a spell. She’d had a few dates with those very much in demand men-about-town, Cy Howard, Kirk Douglas and Dickie Greene. But the list of ladies was so long on their busy little schedules that Rita sometimes had to wait in line for her turn. So Aly’s temporary dash to her side was as welcome as rain in the desert.

Joan Crawford marks time with men without complications, like Mel Dinelli and Cesar Romero. But she keeps a weather eye open all the time for a man she can call her own permanently.

When Joan gives a party, she makes sure of avoiding the usual three-gals-to-one-guy situation, by combing surrounding counties to stock the stag line. When she gave a party recently for the Stanley Marcuses of Dallas, Joan sent as far as San Francisco for good looking men. No wonder movie maidens scramble for invites to Joan’s swelegant soirees.

Remember that joint party thrown by Gary Cooper and his so-called estranged wife, Rocky? Well, Mrs. Cooper, a real stickler for place cards and party protocol, scanned the invitation list and screamed, “Gary, for heaven’s sake, don’t you know any extra men?” The Coop was toiling at Warners at the time, so he checked all the men without wives at the studio—and came up with Steve Cochran.

“I don’t know him,” hemmed Rocky, “but,” quickly, as Gary was Crossing Steve off, “I’ll invite him. We need men.” So in came Steve, the night of the party, an hour late, and, as if that wasn’t enough, he had a doll on his arm—Ginger Rogers, no less. Rocky wished up another place card, but her man-woman, man-woman seating was completely ruined. And I haven’t heard of Mr. Cochran being invited again.

Ginger, on again off again with Greg Bautzer, took to her heels when he dated another very lonely lady of Hollywood, Jane Wyman. And I always did say it was broadening for a girl to travel, coz right off the boat and the bat in Paris, Ginger got herself a handsome Frenchman. Jacques Bergerac—I believe the translation for the name is “Shepherd”—and this French guy made a fine shepherd for our little Bo Peep.

Everyone here loves Janie Wyman, but her romantic life since she was wooed by Ronnie Reagan has been on the catch as catch can order. After the divorce, you couldn’t sell her Don Juan, but when the normal depression was over she perked up and decided she was too young to be a stag at eve. But what was there in the male line for a gal to choose from? Of course, there was always Mr. Bautzer, then in one of the off periods with Ginger. He made a beeline for the honey. I believe the hectic romance lasted all of three months and poof, it was over.

Then along came Travis Kleefeld, twenty-six, handsome, well-heeled. Janie tied up her loose ends and fell hook line and blinker for the charming real estater who would have been lucky to get Wyman for a bride. But came the disillusionment—his parents didn’t swoon for the actress. And she realized there was too big an age gap. The girl everyone loves wasn’t in love and wasn’t being dittoed.

It’s a fine kettle of female fish when beautiful girls like Barbara Stanwyck and Nancy Sinatra have to go to parties together because of the manless condition here. For a while, Babs was in luck. Jean Pierre Aumont liked her very much. But the same breaker-upper of her marriage to Robert Taylor took Jean away—he had to go to France to work. I believe that if Aumont had been able to stay, the mutual interest might have ended at the altar. But it was too soon for Jean after the tragic death of his wife. Maria Montez.

So, trying to keep her life uncomplicated, and because there are so few eligible men around, the two rover girls, Babs and Nancy, chaperone each other to the smart cafes and soirees.

Of course Pete Lawford doesn’t help the more-girls-than-men situation here. He has always been social, but he used to escort movie actresses, especially when they were in the limelight for any reason. Now he’s strictly Southampton, Long Islard. or Palm Beach, Florida.

Rock Hudson is the Dowagers’ Delight. Also the Debs’. How they creep up for the close-up with the tali, dark and oh-so-handsome young actor! Rock, very amiable, plays no favorites, although he confides that the only girl who has really interested him since Vera-Ellen is Marilyn Maxwell. But not for any obvious reasons. “She likes to laugh, and she isn’t possessive,” Rock explained.

The quickest way for an unknown male to get his name in the papers is to latch on to a movie star actress. No one had heard of David Niven until he was seen everywhere with Merle Oberon, many years ago. In fact, who, outside the small International set, had heard of Aly Khan before he chased Rita to Hollywood? But I want to give a plug here and now to young Craig Hill, who is sticking to his unknown girl in Laguna, when he could win scads of free publicity if seen with star actresses of the Piper Laurie calibre.

So who does Piper go with all the time? Middle-aged producer Len Goldstein, who used to make pictures with her at Universal-International. But this one looks more like companionship than marriage. There just isn’t a young man around that the extremely intelligent Piper wants to spend a lot of time with, although she has been seen with Dick Anderson lately.

But then, can the young men afford to dine her at Romanoff’s, La Rue’s or Chasen’s? The answer, in most cases, “No.” I’d like to set Piper down in a city in Texas—where men are men and there are lots of them—where she could choose instead of being chosen.

Before Howard Duff married Ida Lupino, he told me, “I won’t date anyone who makes more money than I do.” I don’t know what Ida makes. But the checkbook is another reason why single star actresses have such a rugged time on the male dating front. How many men are there who can match incomes with ingenues who can earn up to $5,000 a week? And a man who’s a man for all that, doesn’t usually let the lady pay. Better to call his soul his own.

The loneliest gal in town has always been Hedy Lamarr. A director friend of mine from abroad, told me that the day after he was introduced to Hedy at a dinner party, she called him. And he didn’t know whether to be flattered or frightened. I refrained from asking why Hedy had telephoned. I’m sure he wouldn’t have told me. But I’m just as sure it was because she was lonely and liked the looks of this man. We’re living in a modern age, so why not call for a date?

Kirk Douglas learned the feminine facts of life in Hollywood when his beautiful wife Diana divorced him. He found a world of waiting women from Rita to Gene Tierney to Terry Moore—all ready, willing and able to dine with him at the drop of a phone call.

Cy Howard has an antenna—invisible but potent—that lets him know when a girl is going to be in the news. He landed Lana immediately after she left Topping, for his dine-and-dance date. He caught Rita when she walked out on Aly. He purswooed Paulette Goddard to Europe. It’s all good for party business.

Ann Miller would give all her dancing shoes if she could snare a “Will you marry me?” from Bill O’Connor. But the legal luminary is very elusive.

Pat Neal took a real beating publicity-wise from the aforementioned Mr. Cooper. I honestly believe that Pat would rather be lonely than in the limelight with a married man. But she fell in love with Gary, and he did with her. He just couldn’t quite make the leap from one marriage to another. And Pat did the only thing a girl as innately nice as she is, could do. She went away. I see her about, kind of lonely, but the chin is up.

It was a lucky day for Ann Sothern when Dick Egan crossed her path. He’s a nice guy and she knew he wasn’t using her for publicity when he called. But in this town a woman doesn’t always know. There’s a type of man who likes to dress himself, so to speak, with a beautiful woman. Joan Crawford will know what I mean. And a star has to be seen at premieres and such. So sometimes, she says, “Yes,” even though she isn’t fooled.

And hostesses squawk about inviting single women. They might have to find someone to pick them up and take them home. But usually, the lonely lady goes to the party alone, hoping she won’t leave alone, but it’s dollars to dimes she will. Because the stags have so many fauns to choose from. And it’s strange to see Hedy or Barbara or Joan or Ginger, vanishing into the night, driving off in a new Cadillac, without a guy. Dolls without guys—that’s Hollywood for you—a big hunk of it, anyway.