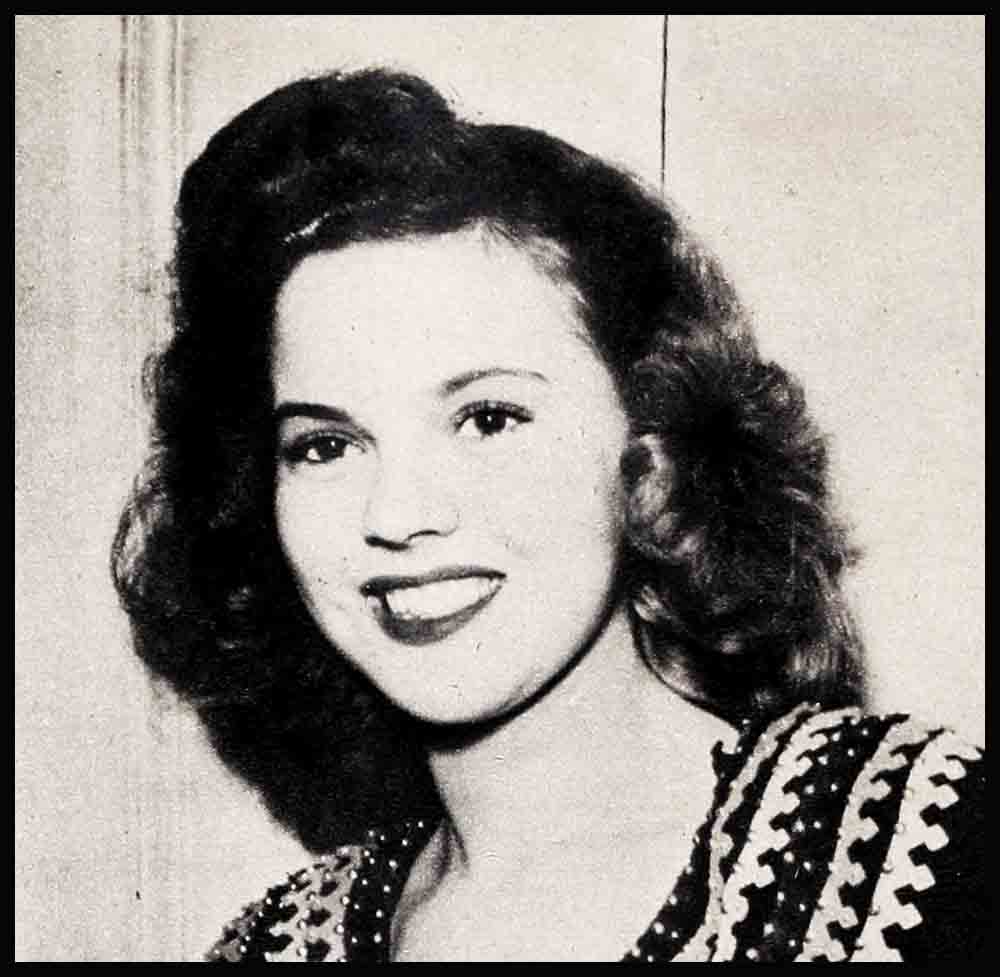 Aged five and the rage of a world struggling to escape from material depression and spiritual sluggishness, Shirley Temple was the nearest thing to a miracle that a shock-absorbing public could hang its heart on in 1933. That was the year when brokers, bankers, gangsters and stars (especially stars) learned the full meaning of that precious line from the World’s Best Seller—“And a little child shall lead them.” I say it with reverence and pride. That the Great American Public should have chosen to worship at the tiny feet of the small Temple for several years will make nice reading for future generations. I can hear them saying, “That must have been before Gin Rummy!”

What will Shirley’s descendants be saying? Will it be . . . “And she grew up to be one of America’s greatest actresses,” or “Too bad, she married so young and gave up her career”? I’m not making any predictions but I’m saying the odds are even.

When I saw “Since You Went Away,” I heard people all around me saying that Shirley was “simply sweet.” After a two-hour visit with her last week, my verdict is . . . sweet—yes, but far from simple!

“Wouldn’t you like to do a stage play?” I asked.

She thought a bit. “I don’t really know. I’m afraid I would get tired of doing the same thing every night.”

“But, dear, the first two or three rows of new faces each night would inspire you all over again,” I countered.

“That’s probably all that would be there—just two or three rows,” said Shirley.

At the time I interviewed her as a wonder child, I was impressed by two great qualities—honesty and humor. Through the years of changes, which could only be known to a child prodigy growing up, she has kept both qualities.

When Mrs. Temple brought Shirley to see me eleven years ago, I was all set to treat her as I had always been treated as a child wonder. I remembered the questions they used to ask Little Elsie (a headliner at six) . . . How did she learn her songs? . . . Did she really like being an actress? . . . Did she like dolls? I remembered how bored I had been but, after all, what else could a child actress talk about? I soon found out little Miss Temple did not care about talking at all. She was polite but firm about it.

We went into the garden, which she surveyed with all the air of a prospective buyer. She handed me a stuffed silk cat she was hugging, and said: “Hold my kitty, will you, please? I brought him cause I thought you might want to interview him.” With that, she walked back to the swimming pool and spent an hour with my then somewhat new husband, sailing toy boats which he had made.

“She likes you,” said Mrs. Temple when Shirley handed me the kitty.

“He likes her,” I said to Mrs. Temple when my husband handed Shirley our most beautiful boat as a parting gift.

Mrs. Temple and I had plenty to talk about then for I knew what she had ahead of her as the mother of a wonder child—plenty of worries and struggles. Mrs. Temple has had them all right but has come through with a smile. Lately, I had heard that she was rather difficult about Shirley’s going out “on her own.” Tactfully, I phoned an invitation to tea for both Shirley and her mother.

“I’m afraid I can’t make it,” said Mrs. Temple, “but you don’t want to see me so I’ll drop Shirley off at your house. I’ll do some things I have to do and come back for her.”

“But I want to see you and Shirley together.”

“I’ll come in later but you have a nice talk with her first. I’m anxious to know how you think she is developing,” said the supposedly “difficult” Mrs. Temple.

For our appointment, Shirley arrived right on time—and not because Mrs. T. brought her. She came in a station wagon.

“You didn’t drive that big thing, did you?” I said.

“Oh, no! Peterson brought me, but Mum will come for me.” She stood there in the doorway, looking like what I think every real American parent would like to have a sixteen-year-old daughter look—a thoroughly nice American girl.

For Mrs. Temple and anyone else who is interested, here are the little things about Shirley that impressed me most: Her handshake—strong and cool . . . her beauty in a face-to-face close-up. How they managed to make her look almost plain in “Since You Went Away” I’ll never know. Maybe the film was made some months ago. Between fifteen and sixteen, beauty can move in unexpectedly.

Her coloring is definitely her own. I couldn’t even trace any lipstick.

Her eyes twinkle and glow, then suddenly go shimmery as if pushed by a tear when she talks about the wounded men in hospitals she has visited or maybe about brother George having sailed again for duty in the Pacific the night before.

She loves her school. She is graduating soon and, “They have a wonderful ring ceremony where each senior gets a lovely ring!” She caressed the finger that’s going to wear it.

“I’ll bet you don’t wear that long,” I quipped, having never gone to school.

“Oh, yes I will! You’d be surprised how many of the girls wear them long after graduation. They are lovely! Quite expensive!”

“A little over twelve dollars,” said the girl who has made millions.

Definitely, Shirley is not career-conscious. Her school has her heart at the moment. Her friends are school friends. Her dates are with brothers and pals of school friends. I asked her what sort of parts she wanted to play.

“Just natural girls,” she said. “The writers don’t seem to know much about us.” (Note that she considers herself more a girl than an actress.) She continued, “They either have them . . . I mean girls my age . . . wild, sort of necking kids, or introverts.”

“Wouldn’t you like to do character stuff . . . I mean parts with dialects?” I asked.

“Oh, yes!” Shirley smiled—and when she does, believe me, those much advertised sunbeams bow to their superior— they have no dimples.

“I like costume pictures,” Shirley mused. “I’d like to do a character that wasn’t sweet, but the Kitty Foyles and Pygmalions don’t come along often—and when they do, there are so many clever stars to grab them.”

“Do you think you could do either of those roles?”

“But could you do the Cockney?”

Right here Miss Temple said something that I have never heard a star say. . . . “With the right director, I could.” Imagine a star admitting it would take a director to make her do something well! That modesty is a flashback to her baby days, of course, when she depended on her director for moves and her memory for lines. That she should not have forgotten how to be grateful throws her back in the miracle class where she began.

“What do you think of Van Johnson?” I boomed it out, hoping to catch the well-poised one off-center.

She laughed. “I refused to dance with him once,” she said.

“It was before he made his hit and one of the girls at school brought him to a dance. There was a nice boy I liked at the dance and I just didn’t want to dance with anyone else so I said ‘some other time’ to Van Johnson. Imagine! I guess that some other time will never come now, but I think he’s a fine actor.”

I switched types. “What do you think of Sinatra?”

“Have you heard Dick Haymes?”

“That’s ducking the issue. What do you think of Sinatra?”

Shirley is like that. She knows what she likes and I imagine pays no attention to things she doesn’t.

Another thing that super-impressed me was her manners. No throwing herself into chairs, no wiggling around, no interrupting—and when I said, “Would you like a coke?” she said, “Yes, thanks—but let’s wait until Mum comes. She likes them, too.”

I got busy selling her the idea of learning languages. “They’re so useful all through life and it’s fun learning them.”

She admitted she could speak French, but when I burst into “Parigot” (which is the sort of French one hears in certain parts of Paris), she said, “Oh, I’m not that good—but I played in French on the radio on my Bond tour in Canada. It was fun, though it’s sort of different reading it ‘cold’ right off a script—but they said I was good.” She seemed surprised.

That’s another unusual thing about Shirley—she can be surprised and she isn’t ashamed of the fact. According to modern manners, it makes her sort of old-fashioned.

Her hair is beautiful. Somebody has spent hours brushing it. I imagine it used to be Mum but now Shirley is “grown up” and that’s probably out. She is going to long for lots of the things that automatically go “out” when the teens come in, especially things that are hard work—like hair brushing . . . a labor of love if there ever was one.

We gabbed and gabbed until Mum arrived and we had our coke. We also had some homemade cookies. Shirley evidently has her “shape,” for that roundness she had when she was about twelve has melted into an exquisite little chassis. At any rate, she went for the cookies and even snitched an extra one—but not without asking, “May I have another cookie?” School must have given her those manners. It’s the sort of behavior that comes from having wanted a teacher to think you were the nicest girl in the class.

Between Temples there seems to be a lot of understanding. At least, they stick together. I noticed Mrs. T. calling Shirley—“Shirl.”

“When did you start calling her ‘Shirl’?” I asked.

There was a pause. “Why—I guess it was about when she entered her teens.” I already suspected it had been when Miss Temple reached the age when everything you have or do seems too childish.

I was watching Shirley. “But I think Shirley is such a pretty name,” I said.

I was more certain that Mrs. T. started calling her baby whatever baby liked because she was growing up. ’Twas ever thus! Shirley will learn that when she has her first baby. I hope that won’t be for some time because I think she can do great things if they give her a chance —but, after all, who am I to say what is a great thing? Maybe Shirl (and I do mean Shirl) had so much fame and career as a baby that she would consider marriage and babies both great things.

Whatever she wants, I hope she finds it. She’s so nice. No—I think “fine” is a better word for Shirl.

When they left, I stood waving at them and thinking . . . of course, I miss my young husband terribly and it’s tough having him so far away, but just suppose he had been here to spend an hour at the swimming pool with Shirl, while I talked to Mrs. Temple! No telling what she might have walked off with this time.