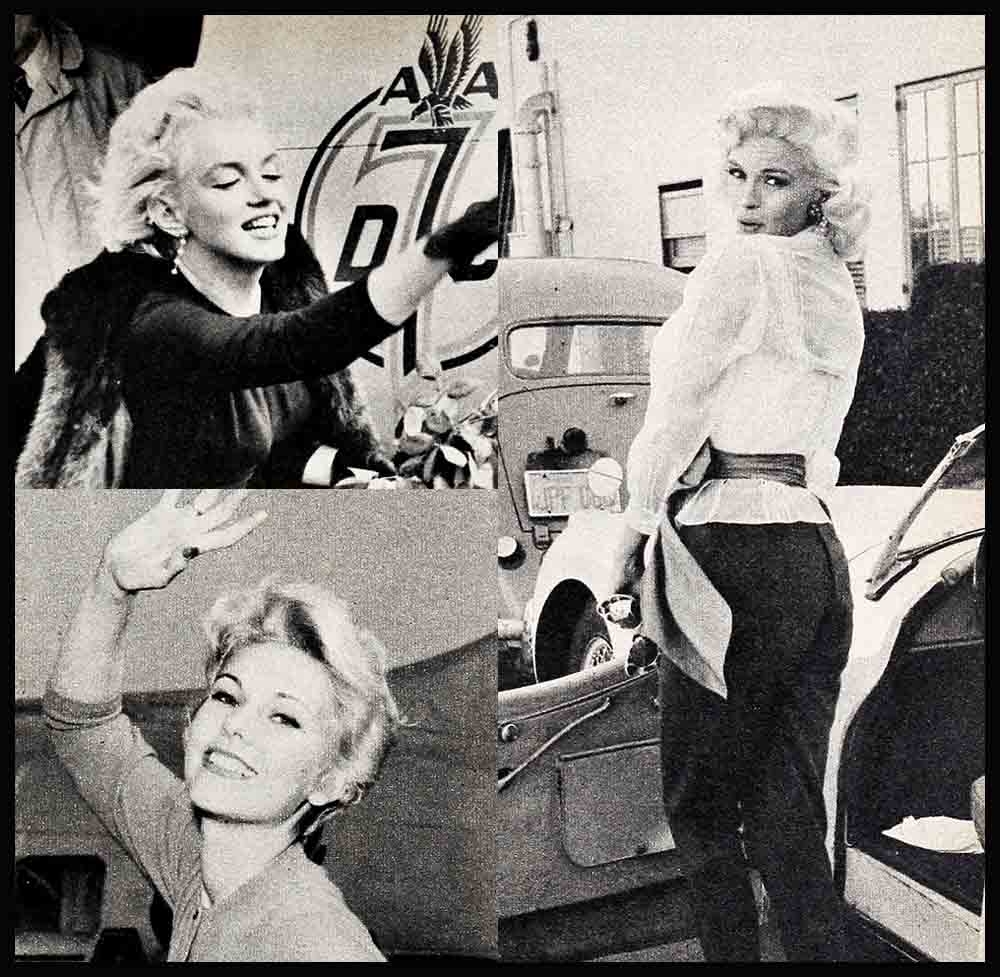 Eeny, Meeny, Miny, Moe, Who Will Be The First To Go?

Hardly a day goes by without Jayne Mansfield’s picture appearing in print. Long before she’d gone back to Hollywood for her second—and successful—try for stardom. she was more talked about and better known than stars with a dozen picture credits to their names. Some of the publicity was good and much of it was bad, but Jayne consulted with her astrologer, decided the stars were in her favor, and posed some more, apparently on the thesis that what the newspapers said about her was unimportant as long as they said it—and preferably on the front page. As a result, the picture that emerges is a somewhat confused one, and a great many people are beginning to take Jayne at her worst instead of her best.

Then one wonders whether the purple haze that hovers around Kim Novak’s pretty blonde tresses doesn’t induce some kind of self-hypnosis when it comes to grading and sorting the men who have played a part in her life. Is it possible that she is more in love with love than with the men who were supposed to arouse this emotion? Which of these is Kim’s ideal? Is it steady, long-admiring Mac Krim, who keeps Kim’s bedside phone ringing around the world? Do such suave types as Aly Khan and Count Bandini really set Kim in a lavender mood, particularly when a rough-and-ready fellow like Frank Sinatra can raise such a rumpus in her life? Is Kim, like a dainty eater confronted by a huge smorgasbord, just nibbling and tasting? Sometimes a person with a hearty appetite goes away hungry.

When Marilyn Monroe wandered out of the Actors Studio and linked arms with highbrow playwright Arthur Miller, her fans began to wonder if she hadn’t gone too far this time. Why doesn’t she leave her mind alone? they asked. She had traveled a long way and made a lot of people happy with a provocative wiggle and her natural charm. Now she was going in for Stanislavsky acting theory and classical music. They pointed an accusing finger at drama coach Natasha Lytess, who, they said, started it all by getting MM interested in Russian literature and highbrow ideas. Now the rumors are hitting head-on—“MM will star in Miller’s next play . . .” “MM will realize she’s met more than her equal in ‘The Sleeping Prince’ with Olivier . . .” “MM is expecting, and a baby may end her film career . . .” If they’re right, Marilyn might find her latest revolt against Hollywood to be her last one.

Jayne, Kim and Marilyn are racing along at top speed on their chosen paths. The chances are that they will be able to sidestep all these stumbling blocks. Yet these are things that have tripped up other promising young stars, and we can only hope that an awareness of the changes ahead will dispel the danger. We want all three of these young women here to stay.

Marilyn’s love of ART and the ARTY