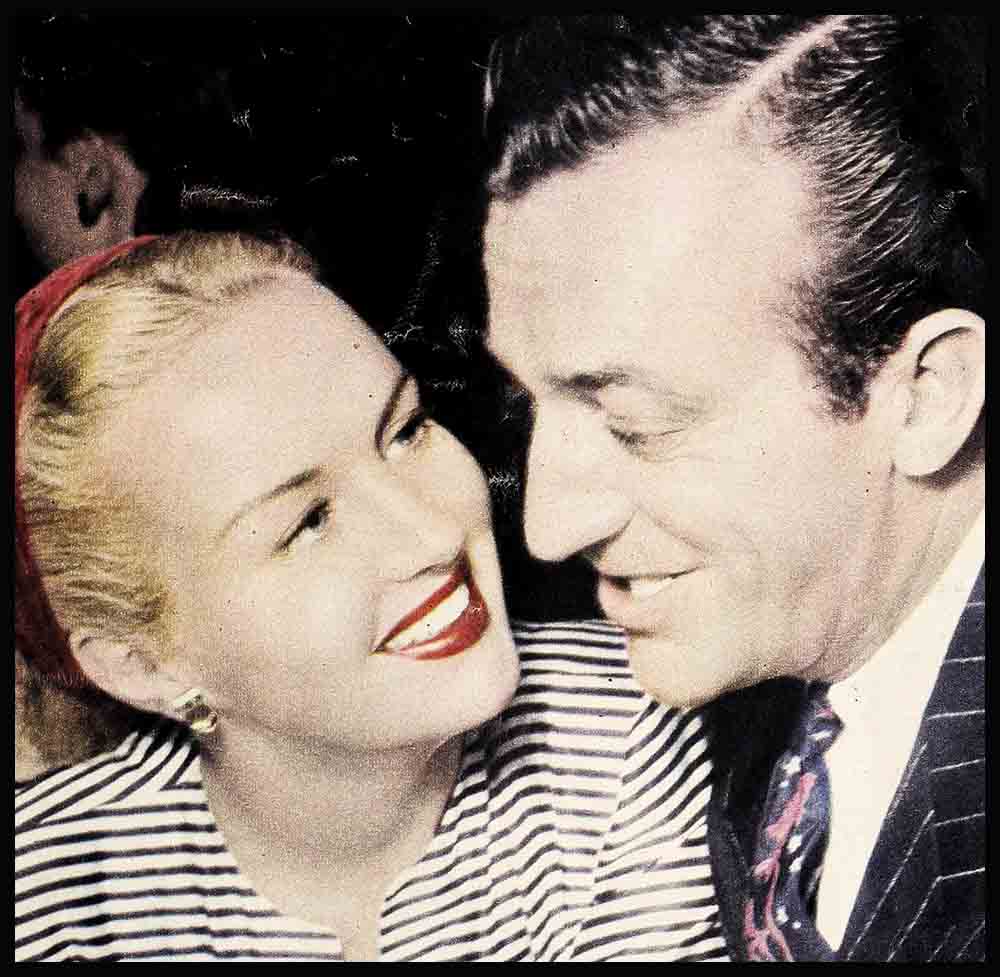 Of all the hundreds of Hollywood marriages, probably that of Pin-up Girl Betty Grable and Swing King Harry James caused the most gloomy head-shaking in movietown. “Won’t last—two careers don’t make a marriage,” said the wiseacres flatly. Meanwhile, what was the nation saying? The nation was crowing in delight, “It’s ideal—the two jive idols of the country will be completely happy!”

And we are happy to report that the Hollywood sophisticates were dead wrong—and the nation entirely right. Two careers notwithstanding, Harry James and Betty Grable are so thoroughly happy together that their marriage, with all its daily hurdles, is an example of love and tenderness to the world.

It certainly has hurdles—as witness the fact that Betty works at her studio from seven in the morning until seven at night; while Harry leaves at eight p.m. for his orchestra playing . . . and is gone until two a.m. And yet this is a blissful marriage—somehow the two crowd in a full week together, every week. The reason for this happiness is a simple one: It’s consideration for each other—a habit practiced as a matter of course by our pioneer ancestors, and almost forgotten in the whirlwind living of today. With Betty doing most of the adjusting quietly, and Harry never dreaming that she does.

All of Betty’s friends know, for instance, of one considerate mission she accomplishes every single day of her working life: She has an hour off for lunch, like everyone else on the set. Instead of spending it over a leisurely meal in the nearby studio commissary, she gets into her car, costume and all, and drives to her home—which, luckily, is very near the studio—thus allowing her self precious time with Harry in the middle of the day, at lunch. After lunch, she’s back in her convertible heading for the studio. What other star actress has ever done this before?

With baby Victoria’s appearance, Betty made another unique decision in the history of Hollywood marriages—she demanded the right to spend every Thursday at home with her husband and baby. Thursday is the nurse’s day off; but all over filmdom other actresses have a substitute nurse come in—all over filmdom, that is, except on the five acres in Beverly Hills owned by Mr. and Mrs. Harry James. Thursday s and Sundays are Betty’s days to be completely a wife and mother, and she makes them just that. She spends those days in sandals and a cotton dress, and her blonde hair worn down on her shoulders the way Harry likes it. Together, all day long, she and Harry play with little Victoria, and feed her and care for her; and meanwhile, they also talk together and swim in their pool—which both of them would rather do than spend an evening in the swankiest night club in town.

What’s more, they seem to have an uncanny instinct about just what the other one feels like doing—and generally that amounts to dinner at a red-checked-table in a hardly-known spaghetti restaurant;’ then a movie; and then a hot fudge sundae at Brown’s on Hollywood Boulevard. And so home.

Mainly, they both love movies; and dinners at out-of-the-way Italian resturants; and staying at home playing poker and gin rummy with their friends. As for drinking, their sole social beverage is a soda-pop drink. And that’s certainly something big they have in common!

But, as in the case of most successful marriages, what they really have in common is a mutual desire to think of the other—with the wife silently doing the major part of the rearranging of lives, and the husband none the wiser! For instance, take Harry’s intense interest in baseball—not just in seeing it played, but in playing it himself. Now, you know as well as we do what the average wife would say when her husband announced, of a Sunday afternoon, that he felt like joining some baseball friends in an amateur game. She’d say, “Go ahead, dear. I’ll stay home with a book.” But Betty is no average wife; she invariably says, “Great! I’ll go, too, and watch you show off!” Then she piles into an empty grandstand at some ball park, complete with a baseball-mad nine-year-old nephew, and the two of them shout their hearts out over Harry’s playing!

And that, alone, should prove what makes their marriage a success.

Only there’s more of it, much more. There’s the cross-country trip Harry had to make, playing one-night stands, right after Betty was up again after small Victoria’s birth. Because Betty had so recently had a Caesarian operation, her doctor definitely disapproved of her going with Harry on the trip. Besides, who’d want to go, even in the best of health, on an exhausting grind of one-night stands all over the country? Nobody would, but Betty. She not only wanted to go, she went; day after day, due to wartime crowded conditions, the band had to ride in baggage cars, with the scenery flashing by the big open doors. Betty rode with them—her hair in pigtails, her famous figure in slacks, her mood completely happy.

And for months the days repeated themselves, one after another: Hours of jouncing travel in baggage cars, with no seats but the band’s suitcases, and no food but paper-bag lunches. The band would be playing for six hours straight, while Betty sat backstage and waited for the brief intermissions when she and Harry could be together.

Many a town never knew she was along. When towns did find out, she’d wave at people on the street and sign every autograph that came her way—but she made a rule never to come out front with the orchestra and take a bow. “Why should I? It’s Harry’s party,” was her idea. And a rare one it is, in show business!

Betty has changed entirely with this marriage. There’s no denying that. She’s changed as every wife does who sincerely wants to make two separate lives into one. Take her appearance, alone. All of us remember Betty when she wore her hair up and invariably topped with a bow or flower; when her make-up was heavy and her clothes figure-sleek and eye-catching in color. Now all is changed. Harry asked her permission first, and then threw away all her hair-bows, rats and do-dads. Then he gave her a long speech on simplicity of looks—which, like most men, he far prefers to fanciness. You know the usual feminine answer to that: “What does a man know about women’s clothes?”

Well, that is not Betty’s answer. She believes that Harry knows what he wants, so down came her hair, away went the hair trinkets; and she swept her closets clean of the dresses Harry objected to. Instead, she wears simple sports suits in gabardine, which Harry (and all men) loves to see on women; and she wears them in the colors he likes—which are blue and white.

And by this time, she’s as pleased at the change as is Harry.

Maybe the biggest rule of their home life that makes for the happiness of these two top career people is this one: Neither talks shop—or practices shop—around the home. Most career couples talk about nothing else. But Harry and Betty agreed on this rule at the start of their marriage, and so far they’ve kept it completely. Harry leaves his trumpet in its case at home and Betty hasn’t been caught doing a single dance exercise or practicing a single song under her own roof.

Not that they don’t admire each other’s careers completely, when either is in the audience for the other. And not that they don’t think of each other’s careers. Betty spent hours searching for just the right present for her husband’s last birthday. When she finally found it, it was an antique brass trumpet which she pounced on triumphantly and had converted into a lamp. Its shade is of thin brass, exactly matching the trumpet-stand; and Harry was crazy about it. Now it stands in their den, on the table beside the fireplace—where the two of them play gin rummy for forfeits like—who will wash the dinner dishes on the maid’s night out!

No, there’s no argument about this marriage. It’s one of the happiest in Hollywood. You can tell so just by asking either Harry or Betty for the name of their favorite tune. They’ll both say at once, “I Had the Craziest Dream,” because that tune is from the movie “Springtime In The Rockies,” during which they met. At the time, neither was particularly interested; he was married to someone else, and she was going everywhere with George Raft. But months later, when they re-met and fell in love, that became the favorite tune of this couple who seem more like a typical American couple at home than any other pair in Hollywood. (Even the pinup baby seems typical. You know what her favorite toy is? It’s none of her hundreds of beautiful gifts from service men and friends and her family—it’s an old bromo-seltzer bottle! She hugs it to her even when she’s asleep!)

But the biggest proof of the real happiness of this marriage came just recently.

Tiny little Victoria had been brought to Betty’s set by her nurse. She was carried in, blinking at the Klieg lights and all the strange faces, and she looked warily around her at the costumes, make-up and mobs. Then she saw her mother—also in costume. That didn’t fool Victoria for a moment—her small face lit up into a smile, and she raised her arms at once to go to Betty. Betty seized her, laughing and hugging her . . . and everyone around realized for the first time that maybe Betty Grable really means it when she says that if her career interferes too much with her marriage, she’ll give up her career.

She may very well do that. Marriages as happy as the Grable-James one are rare—and nobody knows that as well as Betty. And nobody is as tenderly pleased about it . . . except, maybe, the whole nation, who knew it all the time!