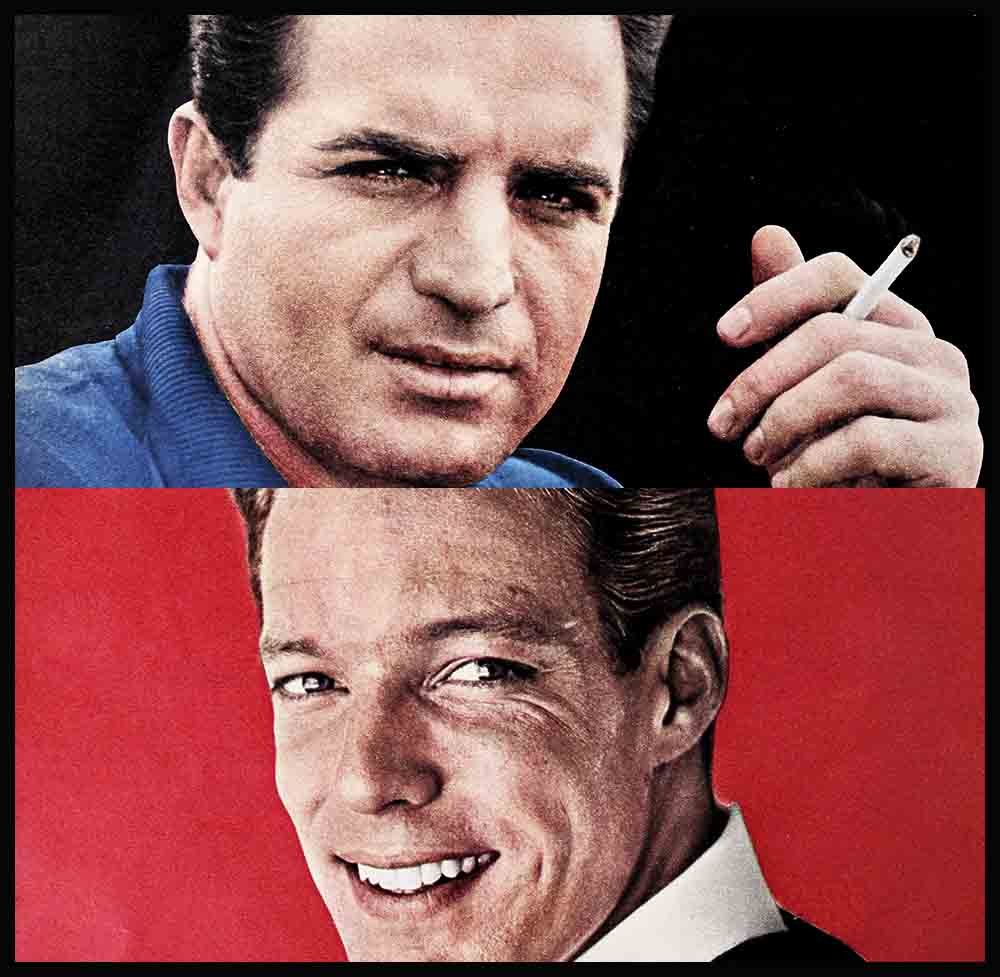 Who Is The Doctor Of Your Dreams?

Your answer is the clue to what kind of female you are she male doctor is a very romantic symbol. I should know. You see, I married one. That was back in 1918. My husband and I cooperated with each other. I worked as an accountant while e studied medicine. Then, when his practice was well established and our daughter was of school age, I set out to become a doctor myself. But that is a story in itself. And in this article, I want to talk about you and your doctors. TV doctors, that is. Casey and Kildare. Yet more than just TV doctors, really, since they have in the past year and a half become so much a part of all our lives; since unfailingly they both pay us their hour-long house calls every week and unfailingly leave their separate and very definite impressions on us. We find ourselves identifying so easily with the patients in their plays and, in fact, we often imagine that we are those very patients.

Let me start, first, by saying this: A number of girls and woman will “fail in love” with their doctors and will look to them as veritable gods. This, it happens, is quite normal and to be expected. We are ill. İt is the doctor who is going to make us well. We are uncertain. He reassures us. We are feverish and insecure. He gives us—simply by his reassuring manner—a feeling of sudden and wonderful security. If the doctor happens to be as ruggedly handsome as a Casey, or as adorably handsome as a Kildare—well, so much the better.

Now, about your own special preference between Casey and Kildare—and what this says about you.

I won’t, by the way, tell you that you probably have black hair if you prefer Casey; that you like to go bowling if you choose Kildare; that you wear heavy makeup if you think Casey’s just marvelous; that you must have eight hours sleep if you think Kildare’s the living end. This is not that kind of parlor game thesis. What I shall do, instead, is try to get to the heart of the very different personalities of the two particular men involved. And, by doing this, try to indicate something about the “romantic” condition of your own particular heart.

Let’s dream a little, then, and start with that first wonderful moment known as The First Date.

Let’s begin with Casey, if only for alphabetical reasons. One has the feeling about this man that he would phone you at some ungodly hour for the date, that the call would be rather abrupt and to the point. One has the feeling that he would take you to the restaurant of his very decided choice and that when the waiter asks “Madame will have—?” Casey would butt in and order for you. One has the feeling that the evening would be an interesting one (neuro-surgeons have some fascinating stories to tell) but that it might easily be a very short one, with Casey thinking nothing of saying, “Well, I’m really very tired now and I’ve got to get you home and get some sleep myself. I have a difficult case to do tomorrow.” One has the feeling that on a subsequent date—perhaps the second or third—Ben Casey would be very likely to come and call for you and that the very first words from him could well be, “I don’t like the dress you are wearing tonight. Why don’t you change into something else? You are so attractive and this dress does not really suit you at all.”

Now, if you find all this all right for you—if you like the man for it, love him for it—what exactly does this indicate about you?

To me, the indication is quite definite. You are a very secure girl. You are an exceedingly intelligent girl. You are out with the man of your choice, a man who makes you feel good as a female, a man with whom you can hold your head up high. His phone call was abrupt? You realize that Ben Casey is a busy man. Besides, he is not the kind who minces words (you probably gathered this a few moments after you were introduced). He orders dinner for you? You realize that Casey probably knows this particular restaurant well and that, rather than trying to ride roughshod over you, he is actually taking good care of you by ordering something he thinks (at least, hopes) you’ll like. He says, “Let’s make it an early evening?” You understand that his work is so tension-geared he is very likely exhausted and needs sleep—that it has nothing to do with his not wanting to be with you. He says, “I don’t like that dress!” You’re smart enough to take that not as a gross insult, but rather as a compliment—since he is obviously interested enough in you and likes you sufficiently well to be able to tell you just how he thinks you look best—to him. (And, after all, he is your man.)

Now—the same situation with Kildare— for those of you who think of him as your guy. And how different it would be!

One has the feeling that everything about this evening would be in a most pleasant and proper form. He would phone while you were still awake, for one thing. The call would be longish and chatty (not that Jim Kildare isn’t busy—all resident-doctors are; it’s just that you know he’d make the time for it). He would probably ask you what you felt like doing on the night of your date. At the restaurant, when the night finally came, he would never think of not asking you what you preferred for dinner—and long before the waiter got around to asking. And he would never, never, think of cutting the evening short if he saw that you were having a good time and that the evening was important and special to you.

For all this, then, you adore Kildare.

Why? What kind of girl are you, basically?

You are a romantic girl, in the loveliest sense of the word. You are what is often referred to as an old-fashioned girl. You relate to Jim Kildare because he is a man who can give you the attention and care that you need. Of course, you’re not some- thing out of a pre-Civil War novel of the Old South. You’re not helpless, nor are you namby-pamby. You’re a bright girl who will be thrilled by Kildare’s attentions, but who won’t take advantage of him. You’ll know that he can often be tired, even though he might not show it—and you will then be the one to suggest an early evening. You’ll know that he would never think of criticizing anything about you, so some- times you will ask him, point-blank, “What do you think of this, Jim . . . or this?” You desire to please him and so solidify your relationship on grounds above pleasantries and politeness. But, basically, you are— as I said—a romantic girl. And because of your young man’s nature—smiling, soft- spoken, considerate—you will find this the most lovely of romances to look forward to.

Let us get to the point where the first dates are over with, the “getting-to-know-you” aspect has been concluded, the romance is in full swing.

Now you really know your man.

And what you know about him is this:

Casey is the all-man type. He has a mind of his own, and there’s no pushing that man around. He gets into trouble more often than not—and, most often, he is responsible for causing that trouble. He believes, very simply, that there is a lot wrong with the world, that there is much too much injustice in the world—and he fights injustice, fights it strongly, not actually intending to hurt anyone, yet hurting many people. He is a strong believer in the principle of the end justifying the means.

Kildare, on the other hand—though full- grown and with superb intelligence—is still a little boy at heart. And will probably always be. He shows spunk when he feels that something is really amiss. But the world, to him, is a very good place and filled with good people. He is bright eyed, he is visionary. He gets into trouble too—but it is usually someone else who has caused the trouble. Does he blame that person? Never. Instead he forgives. And herein lies his strength.

What are you like, if you prefer the Casey image?

You are an understanding girl, a patient girl, a girl—and I must repeat the word— so secure in your own personal worth and in the worth of your man, that it won’t bother you at all that there will be many people who, having been offended by him, rubbed the wrong way by him, will criticize you both and whisper about you and even avoid you. But you understand your man and what he is trying to do. You understand that he is a crusader, and that his is no easy task. Sometimes, of course, you will not agree with his particular crusade—but that won’t matter. Because, after having spoken your piece, you will still be there with him. You will ease his anxieties. You will stick with him, always, and no matter what, because you are immovable in your love for him.

What are you like if, on the other hand, you prefer the Kildare image?

Easy get, easy give

You are a giving girl. You are a girl who will give easily all the good that you so easily get. You will give of your own gentleness, for one thing, to balance his gentleness. You will give of your own consideration, of your own sense of caring —again to balance things. You, too, are a strong girl, by the way, you too are secure. You won’t like it very much after a while, for instance, to see your man stepped on, blamed for trouble he didn’t start—again and again. And so, most important, you will give him a sense of support when he needs that support; you will give him the sense of his being the man he really is, a man of sincere dignity and quiet courage, despite the outward boyishness.

I’m sure at this point that some of you must be wondering: “That Dr. Liswood—I wonder which of the two she prefers— Casey or Kildare?”

To be very truthful, I do have a preference.

But I don’t think it would be very fair of me to reveal it in print.

And besides, as I mentioned earlier, I found my own real-life doctor once.

And that was forty-four wonderful. beautiful years ago . . . long before TV.

Dr. Liswood is a prominent lecturer, Executor Director of the Marriage Counseling Service of Greater New York, and author of the best-selling book: “A Marriage Doctor Speaks Her Mind About Sex.”