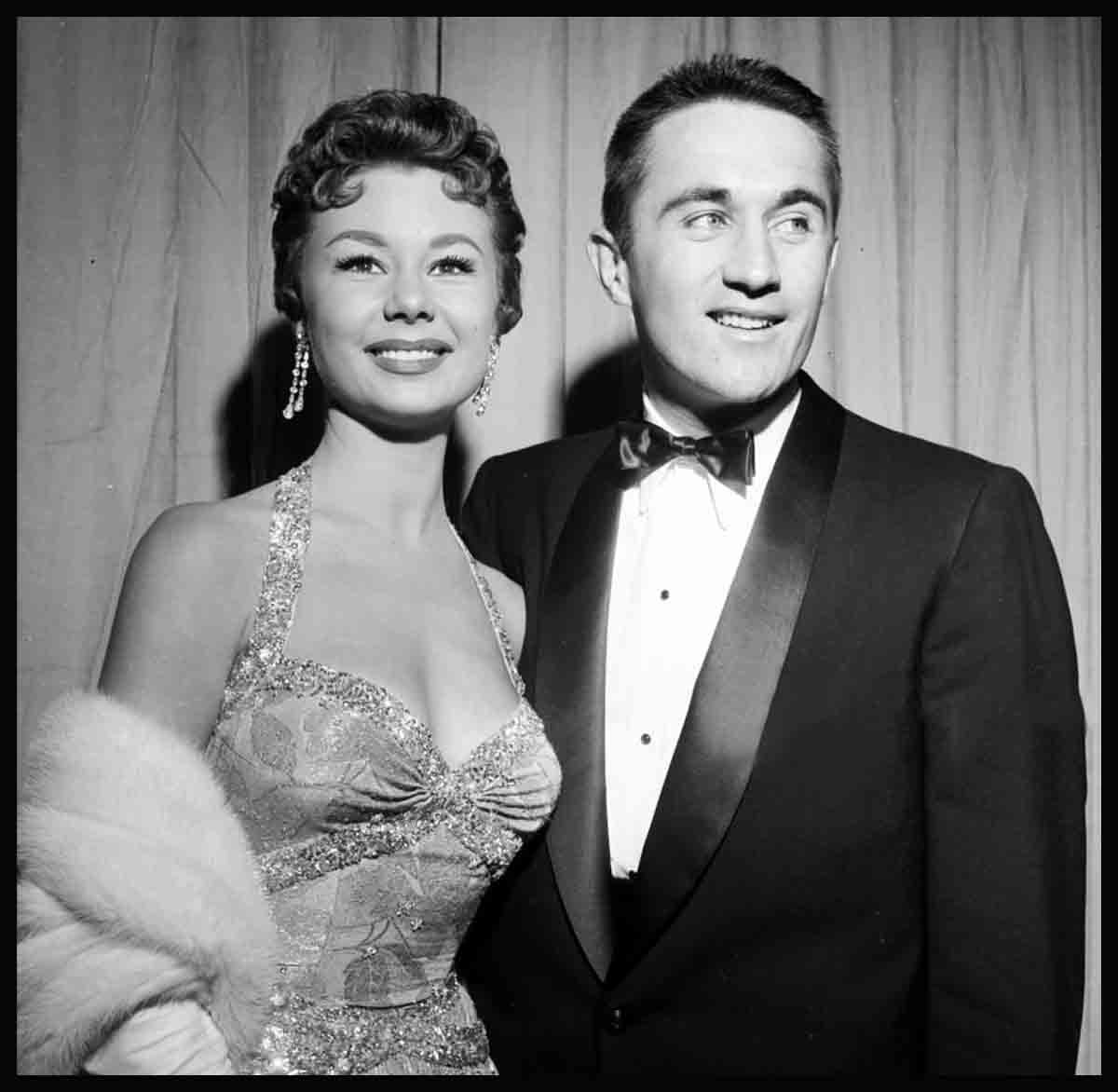 Mitzi Gaynor Made Her Mind Up

There’s always been an electric something about Mitzi Gaynor which made you sit up and take notice whenever she bounced into a room.

The voltage, of late, has been markedly increased. Take as evidence this recent scene.in the Twentieth Century-Fox cafe when studio executives invited their top stars to luncheon to meet an assemblage of advertising big-wigs from the East:

Everybody in the private dining room, ogled as Mitzi wended her way to her seat, despite the fact that Marilyn Monroe, and other eye-stoppers, already were in their places. Marilyn, as a matter of fact, ogled too, and when Mitzi came within shouting distance called out, “But Mitzi, you’re so thin!”

“Marilyn, I love you,” Mitzi bubbled back, triumphant.

“It made my day. Day, nothing—my year!” Mitzi confided later. La Monroe’s spontaneous comment was the first tangible proof of the success of a campaign Mitzi had launched more than a year ago to convince the world that she is grown up, chic, sophisticated, definitely not, as she put it, “the girl next door.”

Mitzi never was the girl next door—no only child of a temperamental Hungarian musician and a beautiful, blonde Viennese dancer, a child who had started dancing at four and who had earned her living as an entertainer since she was thirteen possibly could be.

But she had a hard time proving that to anybody outside her intimate family group. Her publicity portrayed her, she says, as “a nice little girl who can cook and takes care of her mother,” and the film parts in which she was cast during the early years of her Fox contract underscored the impression.

She couldn’t blame the casting bossses. Outside, she confesses, he “looked like a sweet kid.” She was round—“baby fat, ugghh!”—and wideeyed, her long hair irrepressibly curly. Inside she was seething with humor, with temperament, with a restless urge to break out of the little-girl mold.

It was no use, she knew, unless she “changed the outside of me to go with the inside.” She decided to do just that.

All the old Mitzi must go: first the teenage curves and weight, then the curls, the frilly little-girl clothes. Finally, even the antique-filled hillside house in which she had lived with her mother since she had arrived in Hollywood eight years before.

She would be chic, i.e., thin. When her figure was up to it she would wear smart clothes. She would live in a modern penthouse with a view and that, she vowed, would be living.

This resolution came close upon the heels of another crucial turning point in Mitzi’s life. That was the time just after her twenty-first birthday a little more than a year ago when she broke her six-year engagement to the rising young attorney, Richard Coyle. She said then, “I feel I am not mature enough to make such an important decision.”

But she has no qualms about making important romantic decisions now. For the first time, she says, she’s really, really in love. And she doesn’t mind telling the world just exactly how she feels about Jack Bean, the charming young advertising man who’ll be her husband probably by the first of the year.

They haven’t set the date yet, nor picked their attendants—but the important thing is that they have made up their minds and are eying the Christmas holiday season.

And it never would have happened, Mitzi’s sure, if she hadn’t remade herself to be the kind of person Jack could fall in love with. Her personal remodeling program had gone into high gear by the time they met. “That very night,” says Jack, “is the night I fell in love with her.”

It took Mitzi a little longer to know she was in love—three dates, all in the span of a week. And now she says, “It’s like nothing else in the world. It’s a quiet feeling. I feel secure. This I can believe in.”

It’s hard to realize that not so long ago, Mitzi was confused, dissatisfied with herself, her appearance, and most of all, her state of mind.

“I had lived in a dream world,” she says now. “A world all roses and bows in the hair. I found out that life isn’t like that.”

Mitzi resolved fervently to re-design that deceptive outside of hers, and, at the same time, to gain the peace of mind that would allow her true personality to emerge. She really went at it.

First she went on a diet.

When results seemed too slow she signed up with Louise Long, a tremendous and vital masseuse, for frequent poundings. The walls of Mitzi’s new apartment—the family moved into the promised penthouse last December—began to resound with a slap-slap-thumps, powerful grunts from Mrs. Long and agonized wails from her client as Hedy, the Gerbers’ Viennese maid paused in her dusting to inquire “Vat are they doing to our Meetzi?”

Meetzi proudly checked off the lost pounds and the lost inches, replaced a few “Mother Hubbards” with sleek, black, plunging neckline dresses, and on the basis of her new look nabbed a part in a Los Angeles musical comedy, “Jollyanna,” in which, glory be, she could expose to the public some of her native effervescence and humor.

“I even got a chance to do a burlesque strip-tease,’ she gloats. “In nothing but a few skinny little scarves. It was the best part I ever had.”

Dancing regularly is also therapeutic for the figure, Mitzi discovered during the run of “Jollyanna.” But unfortunately two attacks of appendicitis followed by a trip to the hospital for an appendectomy immobilized her for a period of months after the show closed.

But when, recently, Fox announced that Mitzi would join the star line-up of “Three Young Texans,” she knew she’d better get those muscles to work again, and fast. Now she’d be learning something really new—to ride a horse. This picture would be a big chance to show the world how much she’s changed.

With the diet, the dancing, the riding and the massages, with the rapidly growing wardrobe of grown-up clothes, Mitzi began to look very much like the girl her inside had told her she was. She went through the extra-sleek, extra-chic stage, and having tried that on for size, decided she could settle for a natural kind of glamour. To prove her point, she sacrificed her thick, long hair and got herself one of the new, close-cropped hair cuts.

You have only to look at a portrait of the former Mitzi on the wall of her living room to realize how dramatic the changes are that she has effected. Painted by the sailors of the USS Abbott from a fan photograph Mitzi had sent them and presented to their favorite screen star “with love,” it shows Mitzi in an off-the-shoulder, ruffly white blouse, her long hair in Shirley Temple curls, her blue eyes (a mistake, since hers are brown) wide and wistful. And it bears about as much resemblance to the Mitzi Gaynor who sits in her swank living room bouncing funny stories at you today as—well, as Shirley Temple at six bears to Mrs. Charles Black.

The new penthouse is a fitting setting for the new Mitzi. Moving nine rooms into six was a problem, and one room is bulging with cartons of old photographs and clippings, mementoes of old tours and old costumes.

But the visible areas are brand-new—big furniture of modern design, vast vases of bright flowers, a streamlined fireplace, and a whole wall of ceiling-to-floor windows overlooking a canopied terrace from which you can look down at night on a sea of sparkling lights.

Mitzi and Jack Bean love giving parties on her terrace with candle-lit tables and good Viennese food kept warm over the charcoal braziers, and music floating out from a phonograph in the living room.

Romantically, Mitzi’s personal revolution has been a brilliant success.

Professionally, it is paying off too.

At a recent preview Mitzi was startled when a radio reporter covering arrivals at the theatre threw a loaded question at her. (She had expected to get by with the usual, “I am so happy to be here.”)

“What in your opinion, Miss Gaynor,” the mike-happy commentator wanted to know, “is the most important thing for a young star to know?”

“I could spend two weeks talking and not say everything I’d like to say about that one,” Mitzi groaned later.

But on the spot, and with flash bulbs popping, she thought fast, and came up with an answer.

“Not to read her own publicity,” she said, “at least not to believe it. And, even more important, to listen to people—anyone and everyone who will talk to you about your work. For people are basically friendly and their experience can help you. So listen . . . but don’t let others make your decisions. Listen, and then make up your own mind.”

For Mitzi it has been a year of making up her own mind, and making over her external self to match it.

The results, as they say on election night, are pouring in.

La Jolla summer theatre wanted Mitzi Gaynor for the part of Sally Bowles, a sexy gamin of questionable morals, in “I Am a Camera.” She had to refuse, but, she beams, “they really thought I could do it.”

In Las Vegas, where flashy girls go as Tallulah has said “to shill for the gamblers,” a top casino has offered Mitzi a fabulous sum to make a night-club appearance. The Palace, in New York—remember what it did for Judy Garland?—wants her too.

Marilyn Monroe isn’t the only person, it seems, who has noticed that “sweet little Mitzi” has changed. Neither is Jack Bean.

The whole country is beginning to be aware that something new has been added to “our little girl.” You have to go a lot farther than next door to find her these happy days.