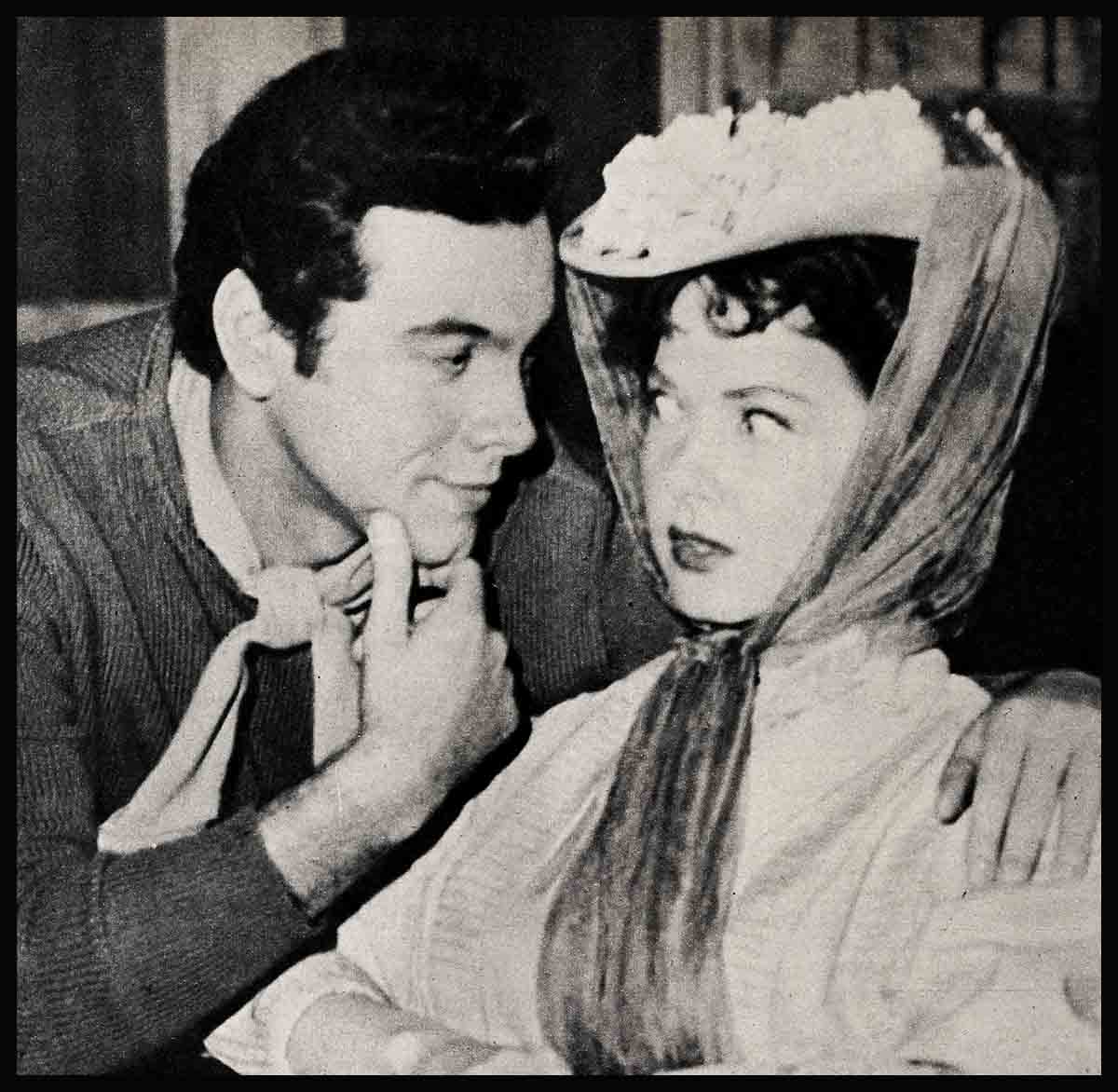 The Truth About The Kathryn Grayson – Mario Lanza Feud

Movie feuds, which receive so much publicity—and let’s face it, they’re great space getters—often begin over nothing at all. A single word I included in the January Photoplay almost started a feud between Kathryn Grayson and Mario Lanza. I quoted Mario as saying, “I’ll always have a soft spot in my heart for Kathryn because she was in my first two pictures.’ He meant, of course, the first two pictures that he had made.

Kathryn, however, put a different interpretation on that statement. And her Irish blew sky high. What did the big clown mean—his pictures! Why, she had been a star years before Lanza had ever seen a movie camera. She had helped him through his screen test. She had taught him many tricks of the actor’s trade during the making of “That Midnight Kiss” and “The Toast of New Orleans.” And now the man was calling them his pictures.

Being a girl of more temper than temperament, Kathryn doesn’t sulk. She believes in getting a beef off her mind and forgetting it. So she grabbed a phone and called Betty (Mrs. Lanza) to ask her what that husband of hers implied by his quote. The affair doubtless would have ended right there—because Betty and Kathryn are close friends, and I’m sure they could have talked the matter over and skipped it—but Betty was away from home.

Meanwhile, a Hollywood columnist with a dull day and no headline on his hands contacted Kathryn and needled her-with the quote in order to get her to spill an opinion of Lanza. This is a popular method of creating news—also feuds—in Hollywood. Kathryn, still not having heard from Betty and bubbling with anger, boiled over. She let Mario have it, but good. And the columnist, doubtless chuckling up his sleeve over getting such.a rise out of her, gave the story a big splash.

When I read Kathryn’s blast against Mario, you could have knocked me over with a pinfeather. Less than a week before I had had a lovely visit with Kathryn, Mario, Betty and their children in the Lanza home. At that time all had been as serene as a June meadow. They all couldn’t have been more affable toward one another.

I’m used to the chameleon quality in Hollywood relationships, but this one had me puzzled. I called Kathryn to ask what—in the sacred name of M-G-M—had happened between her and Mario?

“That columnist caught me in the wrong mood, and I blew my top,” she said. She had enough spunk not to disavow her words or accuse the columnist of misquoting her. Then, having had her explosion, she simmered down to laugh at the whole affair.

Meantime, however, Betty read what Kathryn had said about her husband—and her Irish too went sailing skyward. “Mario asked me to forget the incident; explained that Kathryn, having recently completed a picture, was just tired,” Betty told me. “But I couldn’t get the damper on my temper.” So Betty called Kathryn, demanding an explanation for her tirade against Mario. The two girls had it hot and heavy over the phone; then tempers cooled, apologies were exchanged, and once more serenity descended.

By this time, though, the press had begun to bounce the story around and by the time it reached New York, it had been hypoed into a hot feud between Mario and Kathryn. I’m not saying that the heat is entirely off at this writing. But I do know that all parties concerned have given logical answers for their actions and are complimentary toward one another.

Betty, for instance, made it clear that Kathryn was absolutely not at fault when Mario got in Dutch with his fellow workers by failing to sing at a party given by studio technicians. This incident, as I have explained before, is regarded as the start of Lanza’s much publicized troubles at Metro. On the day of the party he had been working in water for hours in a “Toast of New Orleans” sequence. His voice was hoarse. It was decided by the higher-ups that he had better rest rather than sing at the studio party. Kathryn was to give full explanation for his absence.

This she failed to do, merely announcing that Mario wouldn’t be there. Later the implication was given that Kathryn had deliberately withheld the facts to antagonize the technicians against Mario. “This is completely untrue,” Betty told me. “A studio representative was to instruct Kathryn in exactly what to say. He neglected to do so. Kathryn only knew that Mario wasn’t going to be present so that was all she could tell the guests.”

Kathryn, on her part, pays tribute to Mario’s voice at the mere drop of a half-note. But to say she claims him among her favorites as a person would be an overstatement of the year. However, she does have an impish regard for him and his antics that is a form of affection. “Life around Mario never is dull,” she says. Unless angered or goaded, she doesn’t elaborate upon this statement. But a wry smile and a twinkle in her eyes imply that she could a tale unfold about the big boy that would make fascinating reading.

Lanza is never noted for a surplus of inhibition; nor Kathryn for a lack of high spirits. A saving sense of humor enables them to work together. “A singer has to be positive or the voice would wabble,” Kathryn said to me. The studio cautiously puts their dressing rooms on opposite sides of the sound stages to lessen the possibility of fireworks. They keep out of each other’s way when the cameras are not grinding.

Once, however, Kathryn was trying to take a nap when Mario began a favorite form of exercise, weight-lifting, near her dressing room. After taking the grunts and bumps as long as she could, she went out, picked up the barbell, and hoisted it above her head. “Now,” she said, “will you get over to your side of the sound stage?” The startled Lanza complied. An awed technician later told Kathryn the barbell she’d lifted weighed 110 pounds.

Even when the cameras are turning, the two have a spirited relationship. Remember the Butterfly sequence in “The Toast of New Orleans’? One scene required Mario to hold Kathryn by the arm and for her to slap him. During rehearsals, he gripped her arm so tight that he left blue marks on the flesh. “Take it easy,” she whispered. “I’ve got to play it this way,” he whispered back. He did. “And,” said Kathryn, “when the time came for me to slap him I brought my punch all the way from the floor.”

But Kathryn still wasn’t through with her vengeance. At the finish of the sequence she and Lanza had to run up a flight of stairs. It was an ordeal for Mario, who even then was overweight. So Kathryn deliberately fluffed the scene so the stair-running would have to be done over and over again, much to the discomfiture of he puffing and panting Lanza. “I can be  twice as mean as he can be,” Kathryn once told me with that impish grin.

By such methods she keeps the exuberant Mario under control.

Movie feuds are usually confined to verbal snipes; but occasionally they reach the state of fisticuffs. Mark Stevens slugged director Irving Reis after an argument on how a scene should be played. Cornel Wilde punched cameraman Leon Shamroy during the filming of “Forever Amber.”

The current meowing between Corinne Calvet and Zsa Zsa Gabor, though based on fact, has the odor of a publicity bonfire. However, both girls have sharp claws and know how to use them. So, if needled properly by the press and publicity department, Corinne and Zsa Zsa, who began their tiff playfully, may wind up scratching.

Rarely does Shelley Winters make a film that I don’t hear she’s feuding with somebody on the set. Most of her trouble stems from insisting on playing scenes her way. When she was making “A Place in the Sun,” I said to director George Stevens, “Keep your foot on Shelley’s neck, and you’ll get a good performance from her.” He replied a bit grimly, “Don’t worry. She’ll do as I say.” Obviously she did, because she came through with a performance worthy of an Academy Award.

Frank Sinatra was not so successful in controlling that willful Winters girl when they made their new picture, “Meet Danny Wilson.” A clash between the two was inevitable, because they’re both headstrong, quick-tempered, outspoken personalities who are not short on ego. Tension on the set during the shooting often had the lesser lights looking for places of refuge in case the storm broke. When Frank went to Nevada later for night-club engagements, I’m told he used “Pardon the expression” before mentioning Shelley’s name on his show.

Most of the current comedy teams are too closely knitted together in the public mind to risk disrupture. What would Abbott be without Costello or vice versa? True, Lou and Bud have battled plenty with their studio over money matters; but they also fight together. All is not peaches and cream between the boys in private life. Frequently reports of their private differences reach me; but they never let the difficulties interfere with their work.

Nor do Dean Martin and Jerry Lewis. They admit to having been really mad at each other only once since they formed a team, The tiff came when Dean reproved Jerry for speaking too harshly to an assistant. “I could be with Dean every day and still love the boy,’ Lewis once said to me. “But not our wives. So to keep harmony, we don’t see too much of each other socially.”

Such a-feudin’ and a-fussin’ is to be expected in an industry that deals in high pressure, high salaries, and high opinions of oneself. It goes on all the time in Hollywood, with the Kathryn Grayson-Mario Lanza feud, if such it can be called, most recently taking the spotlight. When I’m making the rounds of a studio lot and the studio publicity man accompanying me turns ashen as we approach a certain sound stage—when he explains that so-and-so is not working today, or the set is closed, I have a faint suspicion that some- body’s blowing a gasket inside. Usually I’m right.

Kathryn Grayson is currently in “Lovely to Look At,” Mario Lanza is in “Because You’re Mine.”