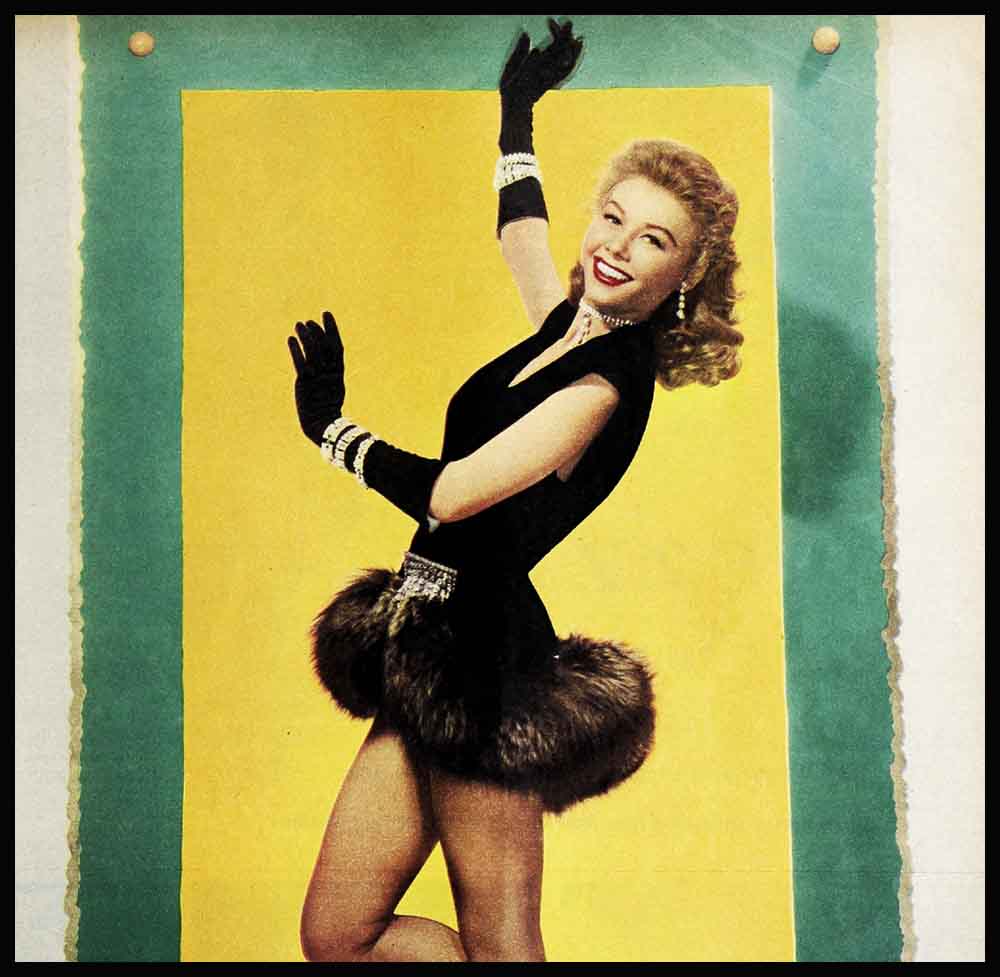 VERA-ELLEN used to be strictly the fluffy, bubbly ingenue type. Even fluttered her eyelids. She went in for dirndls and peasant blouses, and in the evening girlish organdies and voiles, with more little bows and ruffles than you’d find at a strawberry festival. She wore bangs and did her hair in thousands of little ringlets, with a flower coyly tucked in one of the curls. Her hobby was hearts. They dangled from her wrists, her throat, her ears. Not only dangled, but clanked a bit, too. She had hearts embroidered on her panties, her bras, her nighties and her dresses. Even worked them on he gloves and shoes. Heart-edged valance: outlined the windows of her bedroom. Her dressing table mirror was heart-shaped. She even read by a heart-shaded lamp.

This heart phobia was in full bloom in 1947 when Gene Kelly persuaded Louis B. Mayer that the best dancer in Hollywood was Vera-Ellen and he wanted her to do the exciting “Slaughter on Tenth Avenue” number with him in “Words and Music.” Gene had known Vera-Ellen ever since she worked on Broadway with Betsy Blair, who became Mrs. Gene Kelly.

Vera-Ellen arrived on the Metro set the first day of rehearsals in her usual rehearsal costume of fluffy ballet skirts, hearts dangling, of course. Somehow fluff and hearts didn’t seem appropriate for the bold, sensuous dance that tells the story of the sordid romance of a Hell’s Kitchen boy and girl. The next day she wore sweater and slacks. No hearts. Soon after that she established the Vera-Ellen rehearsal costume, which has now become famous on the Metro lot. The costume consists of a turtle-neck sweater, formfitting, and satin blue jeans, tres formfitting.

Vera-Ellen ceased being an ingenue. Let’s skip the psychiatric claptrap and say she grew up. She wasn’t conscious of it at first. Then two things happened that brought it right smack to her attention:

She used to get fan letters regularly from a boy who always started out by saying. “I want to be your brother.” But, after “Words and Music” was released there was a silence. And then one day she received a letter from the same boy, which said, “I have just seen you in ‘Slaughter.’ Our relationship has changed.”

The second happening was one Sunday last spring when Vera-Ellen went to church with her mother. (She is a regular church-goer and often sings in the choir.) As they were walking down the aisle, her mother turned to her. “Vera-Ellen,” she whispered, in shocked accents, “you’re slinking!” It was then Vera-Ellen realized how much her attitude had changed.

She’s determined to keep that twenty-inch waistline. When she isn’t in production she can easily take on weight. So she mows lawns, hers and the neighbors’. She thinks lawn-mowing is the best kind of exercise. When she’s rehearsing she lives on grapefruit and scrambled eggs. “I like to feel fragile and undernourished when I work,” she says. She haunts the health stores in Beverly Hills and Hollywood and buys their gluten bread, yogurt, health candies and cookies.

Vera-Ellen was married once but has been divorced for the past three years. “As deeply sorry as I am,” she says, “that my marriage had to break up I feel that I learned a great deal from it, and I have profited from the experience.” She feels her marriage, disillusioning as it was, has saved her many heartaches the past three years. For it wasn’t until Rock Hudson came into her life that she took any man seriously or really went steady.

She lives with her mother (her father, whom she adored, died about two years ago) in a small house in North Hollywood.

Her full name is Vera-Ellen Rohe—but she prefers Vera-Ellen. Her father was a piano tuner and her uncle a minister. She was such a bookworm as a child that her mother enrolled her in a dancing class when she was nine, just to get her to exercise.

She decided to make dancing her career and her first trip to New York was as a delegate to the convention held by the Dancing Teachers of America. While there she auditioned for Major Bowes, was assigned to one of his units and went on the road. That was in 1937. Her first Broadway break was in Billy Rose’s show at the Casa Manana, where she did her own specialty number. She was a Rockette at the Radio City Music Hall, then appeared in a series of musical shows. Samuel Goldwyn saw her in “The Connecticut Yankee” and signed her to a contract.

She gathered up her mother, her Pomeranian and her canary and came to Hollywood. Their first afternoon in town they took a Santa Monica streetcar and asked the conductor to point out the Goldwyn studios. Vera-Ellen couldn’t have been more disillusioned. “It will look more like a studio inside those walls,” she as sured her mother. But it didn’t. She and her mother lived in a two-room apartment and invested in a car However, she and Mr. Goldwyn parted in 1946 when he wouldn’t give her a hike in salary.

It was in 1948, on Gene Kelly’s urging, that Metro signed her for “Words and Music.” Fred Astaire dropped by the set one day and saw her working with Gene. He posed the question, “Who’s Gene Kelly’s dancing partner?” and when Fred was signed to do “Three Little Words” he asked for her.

For the records, she is five feet, four and one-half inches, weighs between 108 and 111 pounds and her measurements are: bust, thirty-three inches, hips, thirty-two, and waist, twenty. She has brown eyes and her hair is what she calls “candle- flame blonde.” She explains, “One of my boy friends told me that. It must have been a very romantic evening.”