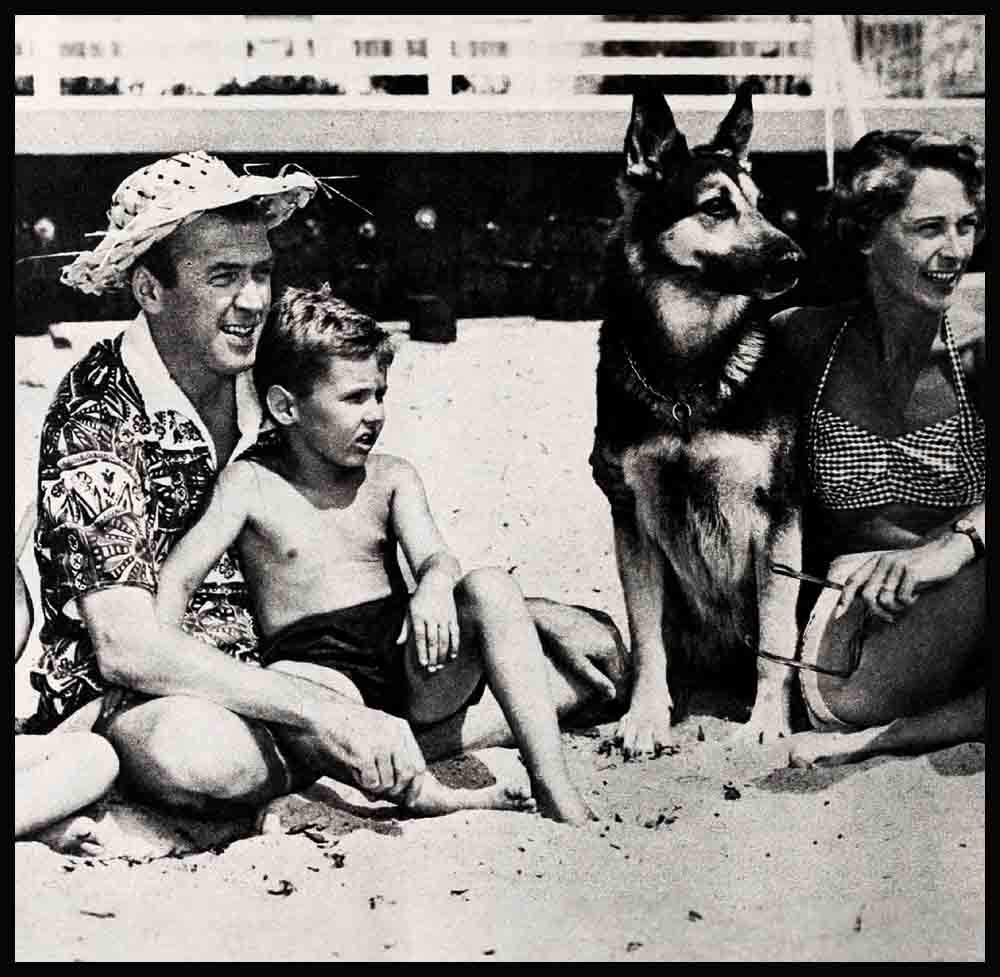 I’m In Love With A Wonderful Guy—by Mrs. James Stewart

It’s been a wonderfully happy year and a half that I’ve been Mrs. Jimmy Stewart. Jimmy’s disposition really astounds me. It must have been made in heaven. It had never entered my thoughts that Jimmy and my sons might ever be a problem to each other. After all, we had known each other a full year before we were married and Jimmy was used to seeing the boys around the house. Usually, the cocktail hour was the signal for the boys to come in when Jimmy was there. Very long and very dull (I thought) big fat bull sessions followed, but Jimmy was never bored or annoyed. At no time had he ever knocked himself out to win them over. He liked the boys—he treated them as friends. And children are very quick to understand.

However, I must admit that soon after we were married I suddenly developed a twinge or two. I suppose it was a natural reaction, but I found myself thinking—now that he’ll be seeing them twenty-four hours a day, will Jimmy like the boys so much?

When we were married, the boys were in New York visiting their father, Ned McLean. Otherwise they would have been at the church for the ceremony. While they were returning home, their governess had wisely and carefully prompted them that their mother’s name was now Mrs. Stewart. They must get used to hearing her thus addressed and act perfectly naturally, she told them. But when we met them at the station, the governess ran forward to greet us, exclaiming: “Oh, Mrs. Me—Stewart—you’ll be so proud of Michael and Ronnie. They were such good boys on the train!”

A day or two later I approached the boys. “Now, remember,” I said, “tomorrow is Sunday. Daddy hasn’t had a single day off since he started the picture and he’s very tired. You must be very quiet so that he can sleep late.”

Michael, who’s four and a half and Ronnie, aged six, exchanged one of those painfully tolerant mother’s-at-it-again looks Two seconds later they were outside shooting an imaginary tribe of Indians off the roof.

Being a stern parent isn’t a role I particularly like playing—or play particularly well. However, the situation at hand wasn’t an ordinary one. A new daddy in any household calls for specific adjustment. When the daddy is Jimmy Stewart, one of the busiest, hardest-working actors in Hollywood, it is important to establish a precedent and to begin our life together in a pattern of perfect understanding.

At seven-thirty the following morning, which was to be dedicated to “precious rest,” the alarm went off. In less time than it takes to tell, the tiredest, hardest-working actor in Hollywood had shaved, showered, climbed into slacks that had served their lord and master long and well, and was heading down the hallway toward the boys’ room.

“Jimmy,” I called after him. “Have you lost your mind? Today is Sunday—you can sleep late. What are you up to?”

“I promised the boys a picnic on my first day off,” he called back. “Looks like I’m not going to get one—so this has to be it.”

“But, Jimmy,” I reminded him again. “It’s Sunday. You need your rest. Besides, where could we go?”

The determined gleam I’ve come to know so well crept into my husband’s eyes.

“It’ll work out,” he said, with quiet assurance.

We were living at Malibu Beach at the time. Whooping and hollering, Michael and Ronnie raced outside and rescued a battered bucket from the sea. Jimmy filled this with ice and cokes. Lunches were packed in shoeboxes, then everyone, including Belo, our German Shepherd, who worships Jimmy, had something to carry. When the boys waved good-bye to their governess, you would have thought we were about to set sail for Suez!

Fifty yards away from our house we gaily marched—to the public beach! Jimmy stopped and eyed our destination as if he were Christopher Columbus, about to discover—land. He turned to the boys triumphantly. “Isn’t it great, fellows?” Honestly, he had me believing in it, too.

Belo was the first to bark with joy. The boys yelled with excitement. Jimmy dug tunnels for them and built them castles of sand. Then we started in on the sandwiches and cokes. A little later we stretched out happily on the warm sand. When it came time for the boys to take their naps, the mighty explorer led his men back fifty yards to home again. It was quite a ball.

I’ll never forget how flattered Jimmy was when Michael named his pet: “Jim the Lizard,” which reminds me of my first attempt to get Jimmy to administer necessary discipline.

Michael, playing with his lizard, suddenly decided in small-boy fashion to squash it. The lizard’s tail came off. “You’re going to show that to your daddy,” I warned him, “and he’ll see to it that you’re properly punished.” This master stroke of maternal strategy had an electrifying effect—it says here!

“Please, Mother,” Michael pleaded. “You spank me. Please don’t let Daddy do it.”

Remaining adamant, that night when Jimmy came in, I pointed out his parental duty. Stern-faced, he took Michael by the hand and led him to his room. The minutes flew by. No sound was to be heard. Finally, bursting with curiosity, the governess and I tiptoed upstairs and listened at the door. Jimmy was clearing his throat.

“Now, Michael,” we heard him say in tones that were supposed to be deadly. “I want you to remember something. Think how embarrassed that poor lizard is going to be without his tail.”

That was it! Some punishment! The door opened and out they came, Michael grinning like an imp and Jimmy practically swaggering like a conquering hero.

With Jimmy everything is an occasion and it makes a great hit with the boys. For instance, when he had a birthday, they insisted on picking out gifts for him themselves. Michael selected a wild printed shirt lined with terry cloth; Ronnie decided upon a pair of maroon shorts. Even Belo carried a carton of cigarettes in his mouth when we all marched into Jimmy’s bedroom singing, “Happy birthday to you!” He was asleep. Annoyed? Not at all. With eyes half closed, he just tore into those packages as if they were the most important things in the world.

Because we feel that the boys are too young for television, it is taboo in our house. However, we always take them to see Jimmy’s movies and invariably—like the night we saw “Broken Arrow”—they scream out and ask if Daddy is hurt. They’re still confused about Jimmy being an actor. It was while he was working on “Winchester ’73” that he went into their room to say goodnight. Pinned over their bed was a picture of Randy Scott, in full cowboy regalia.

“Look, Gloria,” said my green-eyed husband next night at the dinner table. “I think it’s time you brought the boys on the set to see what I do. Besides, I just happen to be wearing a very fancy Western outfit for this picture!”

So we went on the set. Michael and Ronnie hadn’t the faintest idea why Jimmy had on those clothes—but they couldn’t have been more impressed. When Jimmy drove back home that night, a pair of banshees shot out to greet him. But when they found him his old civilian self, they were terribly let down.

“How did you go over with the boys?” I asked, knowing too well by his expression.

There are endless stories to tell—stories that are gay and amusing, heart-warming and touching, about life with Jimmy. He never has moods, never displays temperament. He loves his home. He loves his work. He’s so anxious to get to the studio he just grabs a bite of breakfast along the way. But when he returns home at night, instead of sinking wearily into a chair and reaching for a paper, he encourages the boys to romp all over him. Sometimes he’s even a day late sneaking a peek at the headlines.

I couldn’t believe it was possible for us to be any happier together—and then came our exciting news. I wish you could have seen Jimmy’s face when the doctor told us I could expect my baby next spring! Finally, I had to pinch my husband and remind him that women were having babies all over the world.

We learned our good news very soon after Jimmy finished “The Jackpot” and we went to England where he made “No Highway.” We wanted to keep our secret at least until we got used to the idea, but all our friends knew how anxious we were to have a baby So we had to make the announcement. You know Jimmy had to have an emergency appendectomy before we left London. I wonder if expectant fatherhood brought on the attack!

Speaking of children, here’s a final story Jimmy usually tells as his favorite. Of the boys, Ronnie is the quieter one, but Michael makes up for two of him. He’s always into something. When Jimmy listens to the boys’ prayers, he always suggests to Michael as a grand finale that he ask God to make him a good boy. This routine goes on night after night. But day after day Michael continues to get himself into scrape after scrape. Finally, he decided that God wasn’t living up to His end of the deal—and was shirking His responsibility!

“Please, God,” Michael asked as usual. “Make me a good boy.” Then, with a deep sigh of annoyance, he added; “And I’m just about at the end of my patience!”

It broke Jimmy up completely.