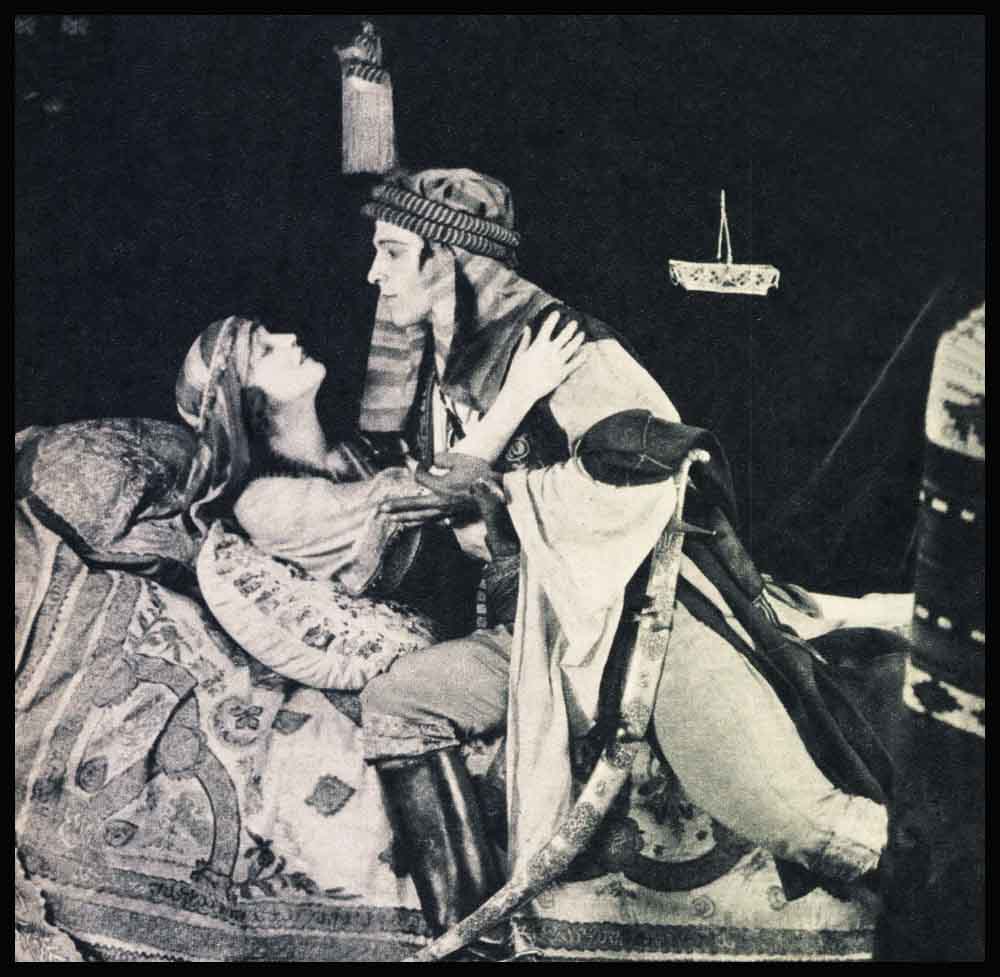 The Re-Birth Of Valentino!

WHEN MOVIES WERE IN THEIR INFANCY, legends and heroes abounded, but of all, none, up to today, ever packed the emotional appeal and impact of Rudolph Alfonso Raffaelo Pierre Filibert Guglielmi di Valentina d’Antonguolla — the man the world came to worship and love, Rudolph Valentino.

Tons of copy were ground out about him, some true, some false. The Italian born boy who came to the U. S. and labored as a sweeper in a saloon at fifty cents a day, was sure someday the fates would grant him fame, and they did, more than any other man. Even after his funeral, which attracted 90,000 persons, some maintained he was still alive, horribly disfigured and in an asylum. They even published a photo purportedly of him. The whole thing was a hoax of course, perpetrated by those who recalled that he of ten said “I will come back, someway, some- how!” But now he has! Peter Pan Brassiere Co. recently kicked off a TV spectacular of his life, and all over the country Rudy’s old films and video shows made up of old elips are being shown to huge audiences.

He was a swordsman, all around athlete who boxed, swam and rode horses with a masterly skill. And his dancing set the world on fire.

The aforementioned documentary was amazing as it still held up through time and there were few signs of dating. In fact, after the show the studio switchboard lit up like a Christmas tree. Who was calling? New fans, people who had never seen Rudy — plus legions of older folks who remembered and worshipped him.

After Rudy’s death, five San Francisco women purchased the huge, sprawling estate he owned called, “Falcon’s Lair,” for $100,000 with the idea of maintaining a permanent shrine, but in 1951 the home was destroyed by the State to make room for a highway. We were there and saw a horde of women stripping the place and grounds as they held up a full crew of workers, bulldozers, etc. That was just 25 years after the passing of the actor. A new generation was around but he still haunted the minds of women with his slinky-eyed hot look, muscular physique, dancing ability and fine acting. Even today, there are long strings of mysterious “women in black” who place fresh flowers on his grave. Pola Negri, Vilma Banky, and others in his leading lady parade have been at one time or another credited with his worship. But as long as there is a woman left in this world, there will be memories of the greatest man the silver screen has ever known — Rudolph Valentino!