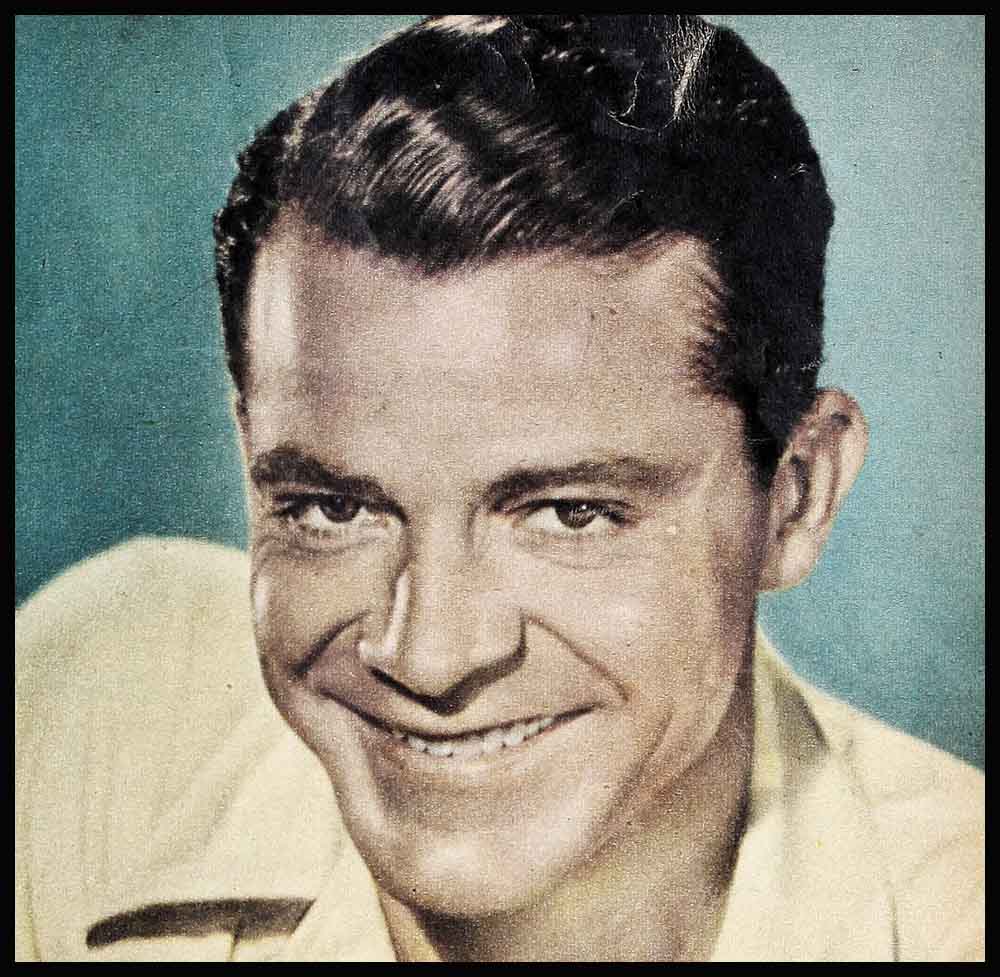 The Man Who Loved Laura

He’s the kind of a guy who doesn’t get discouraged, who is a family man, who gave up a good career because he couldn’t bear the thought of being stuck with it, and who looks to the future with confidence. On his way to the top no w in “A Walk In The Sun,” he suddenly finds that Uncle Sam won’t let Sam Goldwyn and Darryl Zanuck, who own him, give him a well-deserved one hundred per-cent hike in salary. Instead of mooning about this, or shrugging it off and saying, “C’est la guerre,” he grins and says, “Boy, I’m liquid!”

It’s the accountant in him—for he was an expert accountant with a good job when he decided to hitchhike from Huntsville, Texas, to Hollywood to become a movie actor fourteen years ago. He is now so thoroughly divorced from columns of figures that he employs a business manager—“But I sure know enough to check up on him and he says I really don’t need him.”

It was nine years after a very fast hitchhike, lasting three days, before Dana finally got into pictures. Discouraged? Never. Driving school buses for $10 a week, working in filling stations and doing many small-paid jobs never got him down because he always knew what he wanted to do and it was fun to keep on trying. Trying, he figures—trying for anything you want—is all the fun there is. A simple, clear-headed philosophy for a simple, clear-headed guy who says he’s liquid.

He counts as his main blessings his wife, a smart blonde named Mary; his son (by a first wife named Janet who died nine years ago), David, aged eleven; his and Mary’s daughter, Kathy, two; and Stephen Todd the new son. His lesser assets—physical and financial—he can tick off rapidly on his big fingers.

“We aren’t exactly penurious, but we’re not crazy. We do very little night-clubbing, but we like to entertain at home. Sooner or later I’ll get that raise and I’m not worried. If the Government won’t let Goldwyn and Zanuck give it to me now, I’ll get it two years from now when my contract expires.”

There is no doubt as to the fate of that contract after recent proof that the movie-goers are going nuts over Andrews. In “Laura” he completely bowled over the feminine customers as a hard-bitten detective who fell in love with a girl he thought was dead. Even the bobby-socks crowd has begun to whinny like mad at Dana, and his bosses are eyeing him with a new respect.

Andrews claims he had no sense of humor until he married Mary Todd, a talented comedienne whom he met at the Pasadena Community Playhouse. “She taught me to laugh,” he grins. So maybe it’s her fault that Andrews got clipped on the chin by a film star in a New York night club recently. It happened this way:

Movie celebrities were all over this champagne-and-caviar spot and so were autograph hunters, asking for autographs on menus, envelopes and even shirt cuffs. Andrews left his own table and for fun went to another table at which were two of Hollywood’s best actors. He shoved his shirt cuff in front of one of them and asked for a signature.

The star didn’t even look up to see who it was. He just didn’t pay any attention.

So Dana leaned over and spoke confidentially: “Come on, you silly jerk, give me your autograph.”

Still without looking to see who it was, the other star swung. It was a feeble blow—and was the puncher embarrassed when he recognized the laughing Andrews as his victim. Later he sent Dana a fountain pen and a note of apology. Andrews sent him a dozen roses.

For an ex-grease-monkey Andrews is a peculiarly fastidious dresser—so far as public appearance goes. At home it’s dungarees and a dirty sweatshirt, but outside he figures a movie guy is expected to look his best and he goes to such lengths that he won’t carry even cigarettes—or anything else except a money clip and his draft card—in his clothes, because a suit must drape without a single wrinkle or bulge. He is probably the only man in the United States who has his trousers made without back pockets.

He doesn’t have a large wardrobe, except for a great number of loud neckties. He has accumulated eight suits. Four others, brand new, he won’t wear, even though he had to pay $500 for them. They were made on studio orders for a picture, by a studio designer, to fit a certain character and he doesn‘t like them. He plans to sell them.

Carver Dana Andrews was born New Year’s Day, 1912, to the Rev. and Mrs. Charles Forrest Andrews of Collins, Mississippi. The baby and the other children then were moved rapidly to Louisville, Kentucky and, in order, to Waelder, San Antonio, Uvalde and Huntsville, Texas. Hunstville is where they remained with their eight sons and one daughter. He took three years in the school of business administration at Sam Houston College.

He worked for his keep at school and one of his side jobs gave him the idea of being a movie actor. Sound had just come in, but the local theater couldn’t afford a sound projector. So Dana, who knew and liked music, was engaged to provide background noises. No piano stuff. He got a radio man to rig up a couple of turntables and a loudspeaker and he’d put on phonograph records which seemed appropriate to the action. Of course he had to watch the pictures closely and so became familiar with the actors and their methods. “I decided,” he says, “that they weren’t gods and goddesses after all, but ordinary people. I figured I could do as well as they could.”

Even though producers like Goldwyn and David O. Selznick make comparatively few pictures, they like to own plenty of talent. They will rent this talent out to busier lots—at a profit—or they may even sell a piece. Goldwyn sold a piece of Dana Andrews to Zanuck of Twentieth . . . but not even two such great brains managed to make an overnight star.

Starting with “Lucky Cisco Kid,” his pictures were “Sailor’s Lady,” “Kit Carson,” “The Westerner,” “Tobacco Road,” “Belle Starr,” “Swamp Water,” “Ball Of Fire.” Dana always got good notices but was far from top billing. Then came “The Ox-Bow Incident” and at last he was on his way. The top role in “The Purple Heart” was really big-time stuff and the romantic lead in “Up In Arms” wasn’t too bad. “Laura,” however, is the lady who made him what he is today.

Andrews likes Scotch-and-water, milk and any kind of food. He gardens for recreation, specializing in camellias, gardenias and azaleas. His gardener specializes in cutting the lawn while Dana, the demon horticulturist, does all the fancy stuff. One day he was at his friend Henry Morgan’s house when word came that $200 worth of shrubs had been delivered. Forgetting all the proprieties visiting, he ducked for home and overall!

What people like about his acting is it quiet sincerity. He says Mary, beside teaching him to laugh, has also been in valuable to his work because she is such a good critic, having started in the theater herself. Here he invariably pauses to give her tribute.

“We decided,” says Dana, “that two us couldn’t be in the movies. We’d seen that setup fail too many times. Too many marriages broken up. Mary had just good a chance as I did, but we decide it would be better for the man to be the actor and the wife to run the family.”

Dana’s movie career has been one struggle and he hasn’t quit struggling yet. “I was a stepchild at both studios any never a favored son,” he says. “At Twentieth I was the golden-hearted guy who always lost the girl to Tyrone Power. A Goldwyn I was the guy with the heart gold who lost the girl to everybody else is the picture—even Danny Kaye.”

At his lowest point of self-depression he learned that Twentieth was filming Vera Caspary’s novel, “Laura,” as a vehicle for Gene Tierney. Dana knew the book and its Central character, a tough, cynical New York detective. Hardly daring to hope, he asked for the part—and got it. The rest is history told in marquee lights.

He isn’t through asking for parts, now that he found it sometimes works. He is campaigning for the future. He hasn’t given up hopes of singing and the role he wants is that of Curly in “Oklahoma.” Screen rights to this block-buster have no yet been sold and it’s anybody’s guess to which studio gets them—but Andrews wants the part no matter what. After all a Texan can play an Oklahoman, can’t he?

Now that Andrews is an established star his gratitude towards the man who believed in him has not ended in merely having paid him off. Dana is extending the same help that was given to him by financing a former schoolteacher in the short-story writing field.

Dana says the most ridiculous thing that ever happened to him occurred on his first visit to New York. He arrived Grand Central but his baggage, shipped ahead, came in at Pennsylvania Station. He embarked on the ten-minute shuttle-and-change subway ride to Penn. He followed green lights, as the signs instructed. Once he wound up in a broom closet. He boarded trains, but they always went somewhere else. It took him two hours and ten minutes to complete the journey—two hours over par.

Mrs. Andrews’ one complaint about her husband is that he will never go home. He gets to talking and forgets time, so when they go anywhere Mary says to the hosts. “Tell me now what time you want us to go home because otherwise we’ll be here all night.”

One of the most frightening events of his life was on a visit to New York to attend the world premiere of “Wilson.” The fan mob outside the Roxy was beyond control of even New York cops. They snatched his pocket handkerchief, even his coat—but that wasn’t what bothered him. Ahead, where he couldn’t reach her, was his expectant wife, being jostled and crushed. His apprehension was acute—but Mary fought through okay.

She evidently has the same persistence as her now-famous husband. It took years of steady plugging for Dana Andrews to arrive at the spot where he could play the detective who held you spellbound as a restrained and exciting lover. Don’t lay any bets that the man who loved Laura won’t do it again!