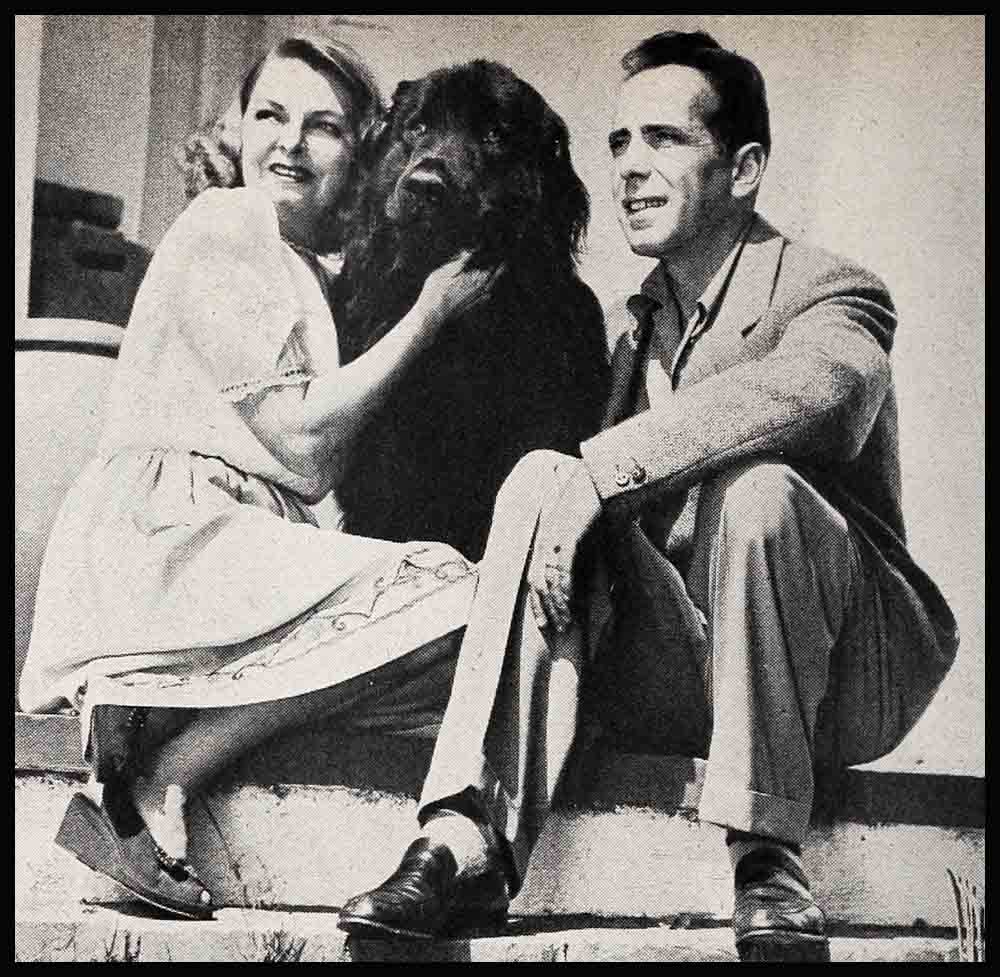 The bets were a hundred to one in Hollywood that tempestuous, quick-tempered Mayo Methot would live up to her name, “Sluggy,” and take a few quick passes at anybody who tried to take Humphrey Bogart away from her.

“Mayo,” said a close friend, “will never in the world let any girl walk off with Bogie. She’d rather hang for murder than see someone else his wife.”

I, personally, have always liked Mayo. I find that she loves her man enough to battle for him—to claw and kick, if necessary—and in our Hollywood there are not many wives who would go to that extreme to hold their mates.

But Mayo has surprised everybody. When Bogie announced after a month of reconciliation he was leaving her, instead of being the fighting, slugging gal she’s always been she began to weep over the telephone, at the time she talked to me, begging me to see if I could find out whether Bogie was coming home.

I would rather have taken a beating than have been the one to put the question to him, for I’ve been fond of both of them in spite of the many battles they’ve had. But here was a plea I couldn’t ignore.

I telephoned Bogie and said to him, “What about it, Boy—you’ve never lied to me in your life. What about you and Mayo?”

“It’s all over,” he said. “Will you tell her for me, please? I’ve tried to tell her through her mother, but Mayo won’t listen. I’m not going home. I can’t go on with the battles we’ve had for six years and I want a new life.”

Before the second break between them came I couldn’t truthfully have said what tomorrow would have brought forth, but in the past when Bogie has parted from a woman he loved it’s been final. This was true in the case of Helen Menken, his first wife. It was true with Mary Philips, his second marriage. But life was never as strenuous with either of these as was his life with Mayo.

These two have had fun. Such fun! They’ve battled in New York’s “21,” they’ve broken furniture in their own home, they had to pay for damages done to the Algonquin furnishings, they put on such a scene in Italy that the fighting there at the front seemed tame. And yet when it comes to loyalty, there has never been anyone in the world who has given Bogie such adoration, admiration and devotion as Mayo.

True, Mayo is jealous. She used to telephone the set when he was making “To Have And Have Not” and ask about the love scenes with Lauren Bacall. She was jealous from the beginning of the former model who made her first important appearance opposite the bad man of the screen.

There is little doubt that Bogie has lost his heart to lovely Lauren Bacall, the girl whose face in Harper’s Bazaar so attracted Mrs. Howard Hawks that she persuaded her husband to see if the face was as photogenic before a moving-picture camera as it was in a still photograph. Those who have seen “To Have And Have Not” will recall that the sultry blonde Bacall girl hasn’t the conventional motion-picture beauty but something extremely arresting and away from the ordinary run of movie queens.

Even though Bogie has a yen for the Bacall girl, he didn’t wear his heart on his sleeve and take her out publicly. For when “To Have And Have Not” was finally in the can, Bogie had another of his famous fights with Jack Warner and he and Mayo retired to his thirty-foot boat, “Sluggy,” there to remain incommunicado. He refused to make “God Is My Co-Pilot,” saying he was tired and needed a rest. Weeks went by and neither Jack Warner nor his star relented an inch. The wire from Bogie to Jack saying that he was ready to return to work remained unanswered and it wasn’t until Howard Hawks came through with the murder mystery, “The Big Sleep,” which the unpredictable Bogart liked, that he pocketed his pride and returned to his studio.

However, no sooner had Bogie and Mayo come off the boat and returned to their life on land than the fireworks cut loose. Just what brought about the sudden plan of the Bogarts to separate a second time is known to only a few people. I am one of them. I don’t intend to reveal the secret Bogie told me, but I think I can say without breaking his confidence that he admitted it was hard to break up his marriage of six years, but that Mayo hadn’t been herself for the past year; that she was emotionally unstable and upset and jealous of every move he made.

“I wouldn’t do a thing to hurt her,” he told me. “She can have a generous financial settlement. All I want is my freedom.”

The first parting of the ways followed on the heels of Bogie’s remark to one of the studio executives that he didn’t think she’d throw any more glasses; that he believed their fighting days were over.

The day after he made that statement he took her to see “To Have And Have Not,” and the next day they announced their separation. I wouldn’t want to say it was seeing him in the arms of the attractive young model that brought about the separation. That wouldn’t be fair to either of the Bogarts, but Mayo had not been happy over the new leading lady for a long time—and we girls do get jealous sometimes, with or without cause.

Many are the fantastic stories told about the battling Bogarts. One of them is, whenever Bogie is in New York and celebrates, he goes straight to the apartment of his first wife, Helen Menken, like a homing pigeon, and Helen, who is happily married to a doctor, can’t persuade him to leave. I have often wondered whether this is not a fable although it has been widely circulated and repeated. He only lived with Helen one month after their marriage and she must have moved in the fifteen years since they were man and wife. I am too liberal-minded to believe it, yet the story has a Bogart flavor.

His second marriage to Mary Philips lasted longer. They were together nine years. Bogie has a great regard for talent and all three of his wives, Menken, Philips and Methot are real troupers.

Mayo gave up her career when she married Bogie six years ago and made it her business to look after him. These two have had as much fun together as anybody in the world. Their tastes were simple. They cared nothing for society nor for big parties. I don’t suppose, in all the years I have lived in Hollywood, I have seen them at more than two parties. George Frazier has quoted Mayo as saying, “In five years we’re going to retire and become beachcombers. That is, if Pa can keep his hair and teeth that long.”

Now, where does Bogart come from. The man who, out of thirty-four pictures was in prison in nine, put to death in eight and a gangster in practically all. His mother was Maud Humphrey Bogart, magazine illustrator, and his father was Belmont Bogart, a prosperous surgeon Humphrey was born on Christmas Day 1894, and the drawing his mother made him as a baby was famous. Almost a famous as his own hard-boiled mug is today. Though he got his start in pictures in 1930 it was not until 1936 that Leslie Howard took him to Warners to play Duke Mantee in “The Petrified Forest.” But it took “The Maltese Falcon” and “Casablanca” to bring him recognition as one on Hollywood’s top actors.

Bogie’s never done anything to promote his stock. He has never been particularly eager to have interviews. I happen to be a personal friend of his and I have always been fond of him, but Bogie doesn’t care about courting favors with anyone.

One thing he has is a great sense of humor. When he returned from overseas, he told me with great glee the story of the private who was in the plane with them when they flew over Pompeii. “I was really awed at the spectacle and remarked, ‘Look at those ruins.’ ”

“The private piped up and said, ‘Hey, bo, you ain’t seen nothing. Wait till you see what we’ve done to Bizerte.’ ”

He didn’t boast about going to Italy and entertaining the boys, but he liked to talk about it and he told me he wanted to go again. For a little while he seemed more serious, but Bogie has never taken anything in his life seriously. Life to him has always been a good time. When he returned from Italy he stopped in New York, and just to make the people in the big town know he was there, he raised some cain at “21” and had quite a set-to.

One story told about him is that the manager of a certain night spot in Hollywood had been asked to keep him out. One night, when he was with a party, it was decided to go to that spot for scrambled eggs and coffee very early in the morning.

Oh, there’s nothing a five-dollar bill don’t do,” said one of the men with him.

When they tried to bribe the doorman, refused to be bribed.