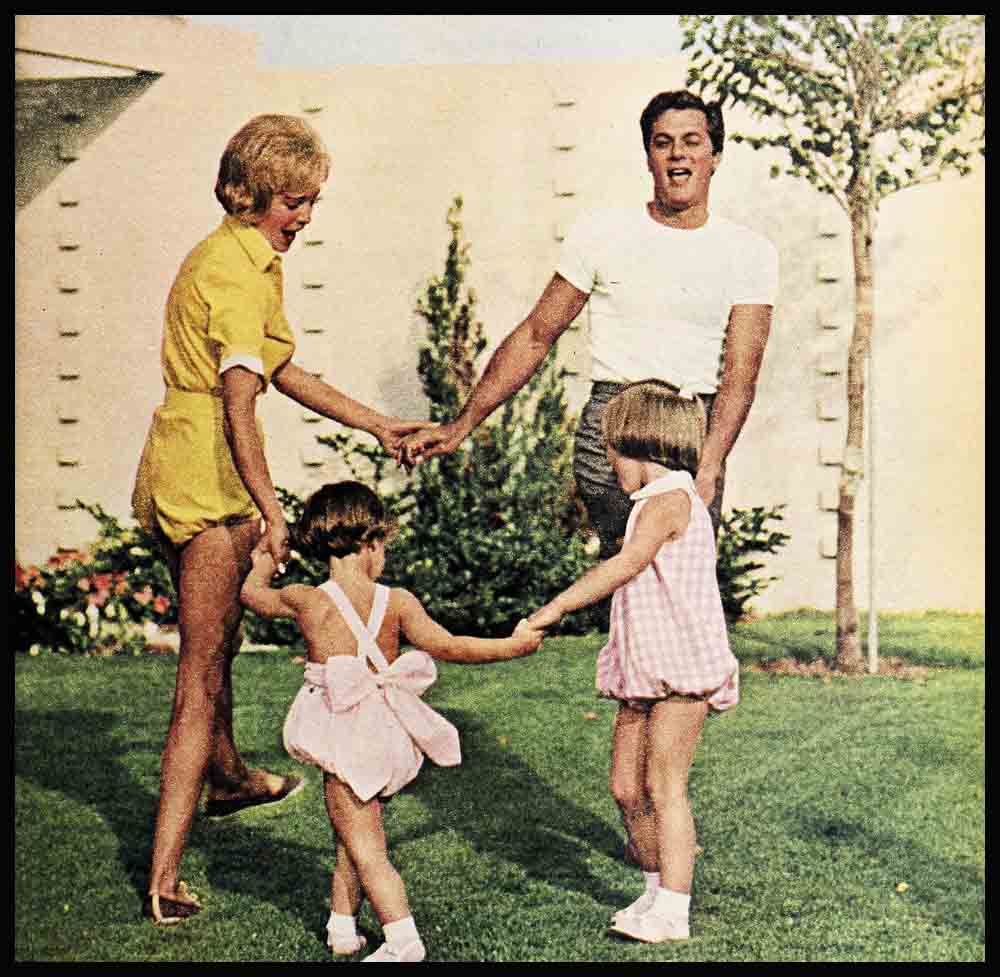 “Why I’m In Third Place In Hollywood!”

There’s never a dull moment in my family—but honestly, this time things went just too far!

“We were on location in Argentina with Tony, and did we have our share of problems! First Kelly came down with the measles. Then Jamie fell and broke her clavicle. Then one of our maids had an attack of acute appendicitis and had to be rushed to the hospital. After that, the wife of Tony’s stand-in had a baby, and then Tony had a bad fail and was all bruised. Now don’t you think that’s stretching things too much?

“But other than that, the trip was wonderful. We were gone three months—one month in Argentina, two in Brazil. To Tony and me, seeing any new country is always exciting, but having a chance to live there . . . well, it was marvelous.

“We had a little house in Salta, which is deep in the interior of Argentina. That’s where they were filming ‘Taras Bulba,’ you see. It was an average house, not extravagant, and it became a bit of a problem.

“On the first floor there was this one big room, a living room and dining room combined. And then upstairs there were three little, tiny bedrooms. That was the trouble. They came out over the living room, so that you’d be sitting downstairs and look up and see the windows of the bedrooms. As a result, whenever the children were napping or after they went to bed, Tony and I would have to tiptoe around and whisper. Otherwise we’d wake the babies, because they could hear everything that went on downstairs. Naturally, we couldn’t have anybody over. But that wasn’t so bad. By the end of the day we were so tired we didn’t want any company.

“Two maids came with the house and they were very sweet. Sometimes we’d say to them, ‘Give us something typical of your country,’ and they’d come up with these fantastic dishes. They made a canaloni, that’s sort of a meat ball with soft dough around it in a sauce, that was really too much. Sometimes they’d make a kind of goulash, with everything from ground meat to peppers to raisins in it with a hard dough around it. That was impinadas. It was marvelous.

“But even more than the food, I liked the Argentinian people. Their warmth impressed me more than anything. But I must admit I was almost added to the casualty list because of their warmth.

“There was an army general there who was very sweet. He knew how I love to go horseback riding, so he and his wife offered to take me. And they wanted to make sure that I had a good horse, you see, so they gave me their best polo pony.

“Well, I want to tell you, this horse must have been a winner! He couldn’t stand it if he was in back of anybody. At each turn of the road he was racing like for the goal. I just made it back. I used to be a good rider, but now I’m a better one. A sorer one, but a better one.

“We also made some trips for the USIA. That’s the United States Information Agency. I visited hospitals and schools and gave talks about the American way of life. After each talk there was a question and answer period. And I must say I don’t want to fight anybody, but you always hear so much about anti-Americanism in South America and I just didn’t find that at all.

“We read here about the one percent who cause noise and make the news and we don’t hear about the other ninety-nine percent at all. Everywhere I went, the response was overwhelming. And they didn’t put me on in the question and answer periods at all. They were really interested in Tony and the children and me as people, not just as ‘representatives.’

“But one funny thing. A lot of them had seen Psycho and some told me. ‘Gee, it’s awfully good to see you looking so well.’ Like they didn’t expect to see me alive and kicking. Some people say Psycho is overly violent and this always starts a discussion about adult movies and censorship.

“I think if a mother knows it’s a violent movie she shouldn’t let her children go. Like if my little girl wanted to see something I didn’t want her to see, I’d just say no. You know filmmakers can’t always be blamed.

“Some people say films should be classified—this picture is for adults. this one is for children. But I think it’s the individual responsibility of the parent. As for censorship. I’m not going to have the government or somebody make up my mind for me. I’m going to decide what my child should and should not see.

“But, still, I’m awfully glad I was in Psycho. Of course, I can’t make too many movies. You know my career is in third place in Hollywood. That’s where I want it and that’s where I put it. First comes Tony, then the children, then my career.

“I’m always hearing divorce rumors about me and Tony, but that doesn’t bother me. We just ignore them. We’ve been married ten years and every year they come up with more stories. I think they’re just hoping someday we will break up and then they’ll say, ‘See? You heard it here first!’

“We’re two people, and in all these years I promise you we’ve had some fights, but we’re not going to get a divorce just because of a fight. I defy any two people—mother and daughter, brother and sister or husband and wife—to live together and not have certain disagreements. That doesn’t mean they’re going to break up.

“We just live our own lives, and live them the way we think best. This trip is a perfect example. I took off six months from work. Why? Because no family can be separated that long and remain a family. And of course we wanted the children with us. They loved it.

“After Kelly—she’s the five-year-old—got over the measles, I put her in a school in Salta. Kids are wonderful. It didn’t matter to the other children that they didn’t speak English and she maybe didn’t speak Spanish. They just loved each other. It was like love at first sight. And, oh, how she cried when we left.

“They had an English class in that school which was, naturally, taught by a Spanish teacher. And when she spoke English, she had an accent. So one day she taught Kelly a song, and when I heard it I almost fell off my chair.

“Because there was Kelly Curtis, standing up proudly and singing: ‘When I was bot a leetle gorl.’

“Now I ask you, how can we ever forget Argentina when our own daughter—whenever she sings that song—will have a Spanish accent for keeps?”

Janet will soon be seen in “Manchurian Candidate,” a United Artists release.