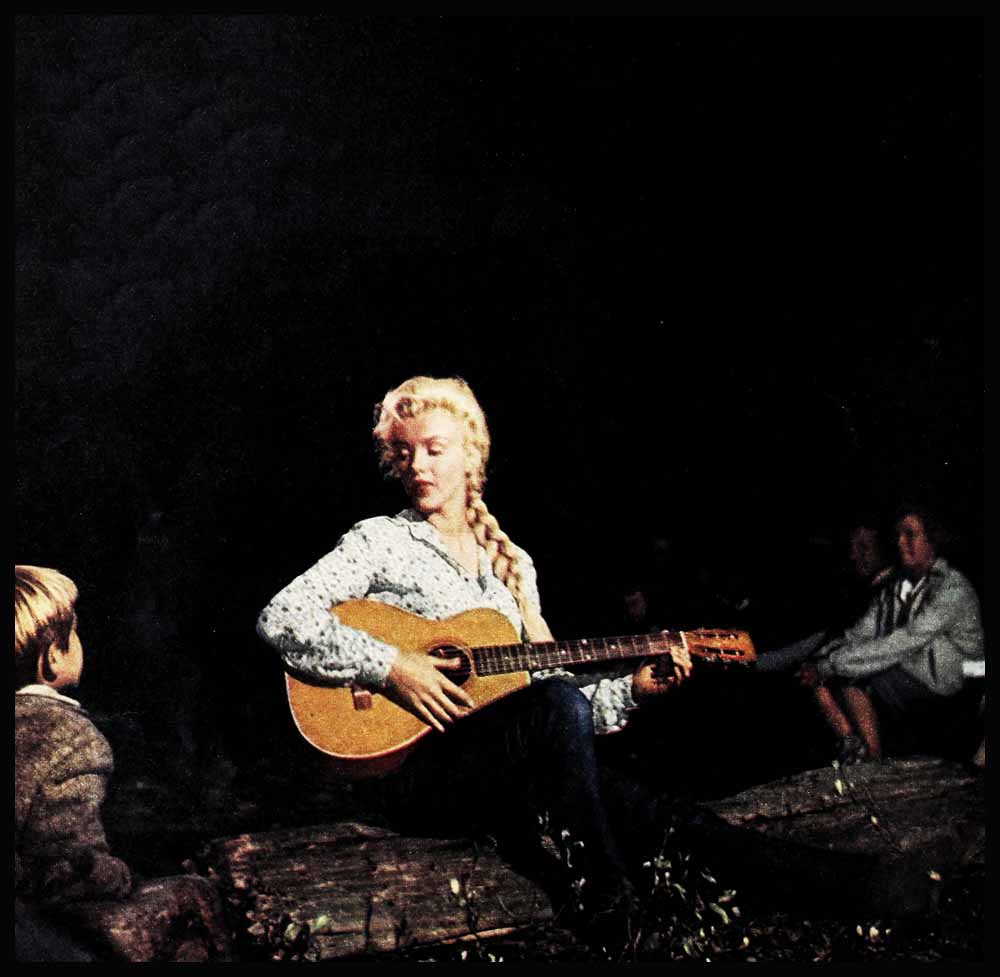 On The Spot With Marilyn!

When Photoplay told me that I was going to Canada to shoot pictures of Marilyn Monroe, I wasn’t excited. After all, in my eight years with the magazine I’ve shot every glamour girl in Hollywood—Lana Turner, Jane Russell, Ava Gardner and the rest—so the idea of traveling 3,800 miles to take pictures of Marilyn Monroe didn’t excite me. Not much. Except that I almost forgot my camera.

I might just as well have left it at home, too, for all the workout it got. You see, Marilyn is still a little cross with Photoplay because of a story we ran last year.

Marilyn may not know until she reads this that the story she so disliked did a lot to win the women in the audience over to her side. No sooner had the issue hit the newsstands than we had thousands of letters suggesting that a gentleman shouldn’t write stories about his former wife, criticizing us for publishing it, and defending Marilyn to the last woman.

But I wasn’t the only photographer on the River of No Return” location who wore a long face. By no means! The other guys had their fingers crossed, too. One morning we all arrived on the set at 8:30 A.M. to wait for Marilyn. At 10:00 A.M. we were told that she was getting ready for us. At 3:45 P.M. we began to shoot— and at 4:00 P.M. we had to stop because Marilyn had a studio call. That was it for the day. Man, were we overworked!

I did have one distinction, though; I was the photographer least likely to get an exclusive picture layout from Marilyn. She never said “No, exactly, but she got the idea across. For instance, she always introduced the other boys as representatives of magazines that “did so much for me”, or have “always been so wonderful to me,” but I was just Sterling Smith, period.

When I came home from Canada, my wife thought I had a hangdog look. I did. And I got it from following Marilyn around. When Joe DiMaggio put in an appearance, of course, I was twice as busy following both of them around Joe never ran around the bases at Yankee Stadium any faster than he ran from my camera and me while we were in Banff.

In the end, I got my chance. A night scene was being shot, and to Marilyn, I was only one more dim figure. She sat opposite a camp fire, playing a guitar and singing softly in a warm voice; she looked little and lonely, as I squatted there, taking pictures to my heart’s content.

I had a fine vacation those two weeks, but I would rather have had my pictures. Marilyn had a heavy shooting schedule and an injured ankle, as well. That’s partly why photographer had it so rough. But she also had a mad on at Photoplay. I hope she gets it over soon, because I’d have walked that 3800 miles to Banff Springs just to shoot Marilyn.