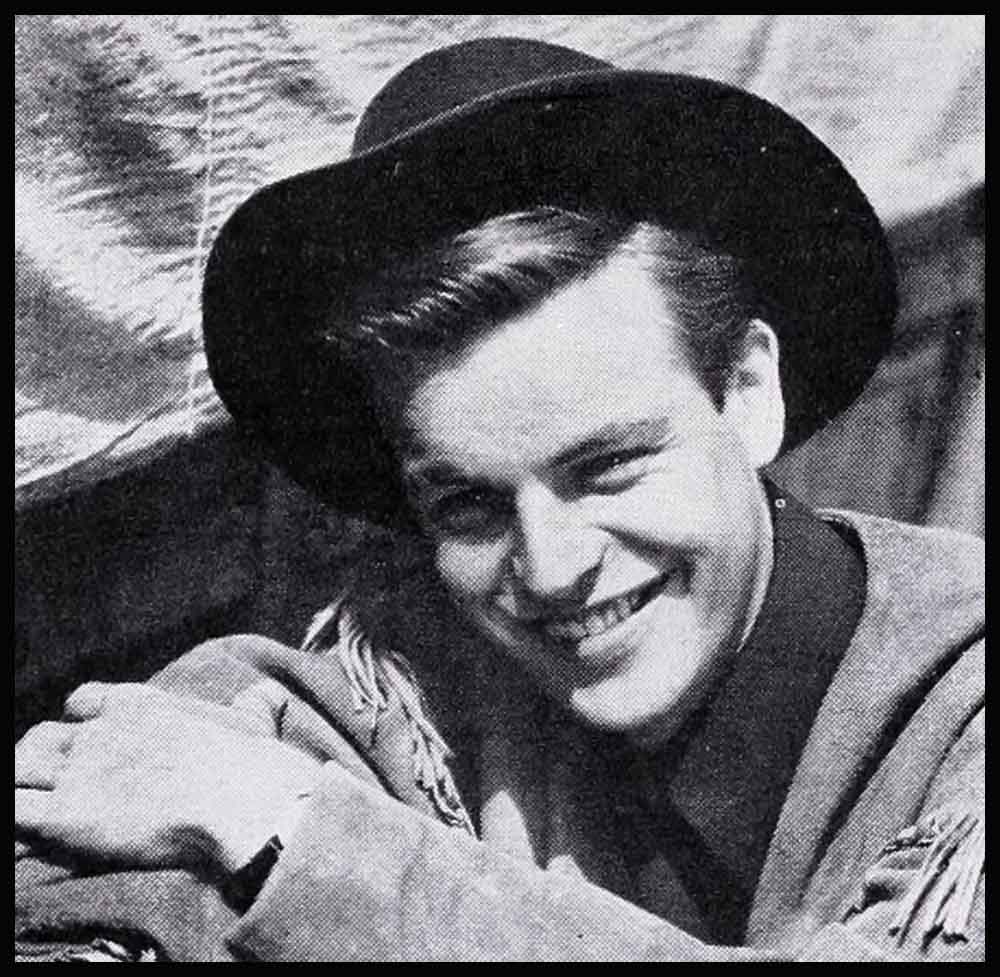 Bring Him Back Alive

When Bob Wagner’s star first began to rise in Hollywood. the inevitable questions were asked: Can he cope will sudden fame? Will his hat size grow larger with each role? How soon will he “know it all”? How long before temperament begins to set in?

The wrong answers spell trouble, headaches, and ulcers. But, everyone was betting on Bob for the right answers. Mingling with Hollywood greats wouldn’t change him. He’d grown up among some of the greatest. Sudden wealth couldn’t go to his head. His family had always been well-to-do. And, most important, be understood that becoming—and remaining—a star involved hard work. An eager-beaver and perfectionist, he’d have no time for temperament. But no one realized that, being an eager heaver and perfectionist, Bob Wagner goes almost everywhere the hard way.

Not long ago, for instance, Bob headed for Lake Arrowhead with a group of friends. Object: to perfect his skill at water skiing. He and one of his chums were skiing double when Bob took a tumble. His buddy whizzed by and his ski connected with Bob’s ear. Bob managed a faint cry for help before he found himself sinking.

Hauled out and revived. be ignored his aching ear and climbed back on skis. But. that evening while driving his friends down the mountain, he began to feel dizzy, pulled over to the side of the road and blacked out. He spent the next four weeks in the hospital having his eardrum repaired.

It was during this period that shadows fell upon the group of smiling faces at Twentieth, for this was the first inkling of the fact that Fox had a brand new problem keeping its newest star in one handsome piece.

By the time he was up and around again, fall had set in and R. J. went out and bought several hundred dollars’ worth of snow-ski equipment. He brought it all back to the studio to show to a friend; but that turned out to be a mistake, for he ran smack into an executive who expressed profound interest. “That’s pretty nice stuff,” the man said pleasantly. Then he added. “And so help me, if we ever catch yon using it, that’s all, brother!”

When Bob began to talk in tender tones of the new M.G. he was saving to buy, studio heads relaxed a little. “This is safe.” they thought, “he’s an excellent driver and a cautious one.” But they didn’t realize that with Bob in a car, gremlins move in.

The day after he acquired his new M.G., Bob found a crowd of coworkers admiring it. His producer was giving it a very thorough once-over. “They sold yon an M.G. with a dented fender?” he asked suspiciously.

Bob explained his good fortune in having an M.G. with only a mere fender dent. That morning, he’d been breezing along happily when a car turned into the wrong lane and headed straight for him. To avoid a head-on collision, Bob turned the wheel sharply. But rain and slippery pavements were against him. The M.G. slid toward a truck, which Bob avoided. But his car hurdled the curb and slopped against a sturdy fencepost.

When he finally reached the studio, the hub cap fell off and rolled away. He slopped the car, replaced the cap and climbed back into the seat. As luck would have it, director Jean Negulesco happened to he rounding lhe corner, and Bob pulled out directly in front of him. Negulesco, who jammed on his brakes. was pretty well shaken and let it he known.

“Yeah.” said Bob, “but don’t you think the M.G’s a beauty? I’ll bet it would really travel at Muroc!”

“You know—the dry lake. Used to race up there.”

“I know the dry lake.” said the gentleman, paling. “But what I want to know is do you still go in for racing?”

“That was when I was sixteen.” Bob hastened to explain. “Had a souped up job that went to a hundred-and-nineteen.” At this, the man crept away into the sunset, wishing the horse and buggy had never been supplanted.

However, adventures such as these never bother Wagner. It’s an old story to him. As he tells it, he was a healthy, happy baby who had an occasional tendency to tumble out of his high chair, which is not so unusual for any baby.

But his friends have another version. They’re willing to bet that, as an infant. R. J. never actually fell from that high chair. They vow that he was attempting to execute a perfect leap. And they’re convinced that he kept at it until he landed on his feet, even if he had to pause periodically and wait for his anklebones to knit.

The fact that Bob’s an expert horseman is no accident. It’s a series of them. As a youngster, his family sent him to a camp in northern Michigan. Bob developed a fondness for horses, but the horses didn’t return his affection and kept throwing him. He was battered and bruised, but determined. So he spent the entire days on—and off—the horses and he wound up on top.

Bob has won a good many prizes for taking dives—into swimming pools. But not before he’d chipped a mouthful of teeth on the valves of the inner-tubes he insisted upon diving through for praclice.

When time came for young Wagner to give serious thought to a career, he thought first of acting. But he did trek to Pittsburgh to consider the possibility of going into his father’s business, the steel industry. Instead, he nearly went into the steel—head first. Watching the molten metal flow from the troughs Bob decided to have a closer look. He tripped and but for the quick arm of a foreman, he’d have gone up in smoke.

Little wonder it’s been said that just being Bob Wagner is a hazardous occupation in itself. And that holds in his professional as well as in his private life.

Now movie making involves a calculated number of risks for the sake of realism. In Bob’s scripts, the studio has never spared the action. While any number of stunt men are ready, willing and well-paid to do the more dangerous assignments, Bob insists on doing them himself. Consequently, “Halls of Montezuma” and “What Price Glory?” found him in various and assorted trenches, surrounded by live ammunition. In “The Silver Whip,” he was called upon to fall from a stage coach and crawl around between the thundering hoofs of six horses. After that, they sank the Titanic out from under him. In “Prince Valiant,” he dueled on the parapet of a flaming stone castle, wound up with a real limp eluding his make-believe captors. And for his role in “Beneath the Twelve-Mile Reef,” he went strolling around the bottom of the Gulf of Mexico.

Even the veteran divers were impressed with Bob’s deep-sea diving chores for “Beneath the Twelve-Mile Reef.” “It’s no cinch,” one of them said. “You’re all by yourself down there. And the only thing between life and death is a little lifeline, If the air hose gets cut, you’re a goner.”

It was while Bob was in Florida making ‘Beneath the Twelve-Mile Reef” that one of Twentieth’s more executive executives marched grimly into his office one Monday morning. “Take a memo,” he said to his secretary, “Rush.”

The memorandum was addressed to Robert Webb who was directing the picture. It concerned Robert Wagner. “As you know, Bob Wagner is one of our most valuable star properties,” the executive began “It’s extremely important that you keep an eye on him. For heaven’s sake, bring him back alive. . .”

The secretary broke in, “This should have gone out last week,” she said.

“Why?” Her employer’s voice trembled.

She handed him the morning paper. In it was an account of how Bob had narrowly escaped drowning in Florida’s Anclote River. The location company had been re-staging Greek Gold Cross Day. Along with several dozen local lads, Bob had dived into the river in an attempt to retrieve the cross. During the scramble, one of the divers had accidentally kicked him in the stomach and knocked the breath out of him. He was being carried downstream by the Anclote’s swift current when he was rescued by an alert crew member.

“Never mind the memo,” moaned the executive, “Make it a wire!”

Needless to say, R.J. was welcomed back from the sea by a studio full of relieved minds. And when he stopped by to thank the memorandum-writing executive for his concern, the man said, “There’s something I’d like to know. How’s your family taken this for all these years? Don’t they worry?”

“Sure they do,” replied Bob. “The way any mother and father worry. But I can’t run my whole life on the idea that I’m going to get hurt. A person can get hurt just walking through a door.”

The executive nodded in agreement. The do was right. If you’re Bob Wagner you don’t even need to walk through that door to meet danger—it’ll come to you! But who can help worrying?