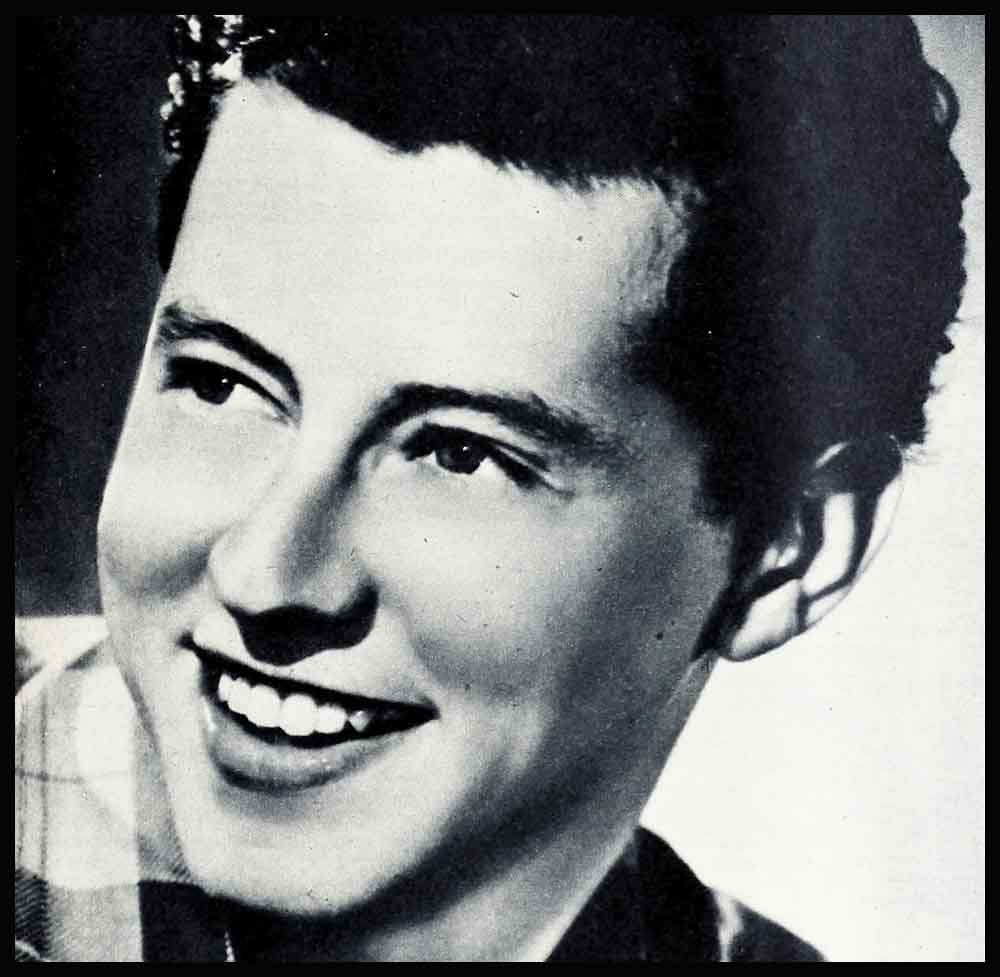 Make no mistake about it—maybe Eddie Ryan lives in Hollywood now, but part of his heart is back in Brooklyn. Maybe he’s been seen in “The Sullivans,” “Take It Or Leave It,” and “Wilson”—but he’s still seeing, in his mind’s eye, a certain block on Midwood Street in Brooklyn; the block between Flatbush and Bedford Avenues. This block was his nursery, living room, playground and very nearly his bedroom for all of his twenty years, and naturally he misses his home!

Not that Hollywood hasn’t provided him with plenty of new sensations in the past year, since he first arrived. He was nineteen then, a kid with a pointed face, an infectious grin, brown wavy hair, alert blue eyes and a trim, skinny body of medium height. He wore (and still wears) the proper clothes for Manhattan . . . a gray double-breasted suit, a pale red tie, a snowy handkerchief peaked in bis breast pocket, a gray fedora. Everything was neat and conservative, except his shoes. They were an hysterical brown and yellow and the Negro redcap couldn’t help letting out a whistle of respectful fascination at sight of them. On the gay shoes Eddie walked into Twentieth Century-Fox Studios and began his life in the giddy film colony.

His life, however, is giddy in a far different manner to that of his fellow citizens. You see, he doesn’t drink or smoke; and when he first reached Hollywood he didn’t dance or drive a car. Eddie is not exactly the most sophisticated guy you’ll ever meet, but he’s definitely one of the most likable. And by this time he can dance (sometimes) and he can drive (somewhat)—though you’ll never find his sparkling blue sedan parked in front of a night club. You’ll find it resting before more simple pleasures: Miniature golf courses, badminton courts and baseball parks. Eddie is a young man with opinions and none of them favor the indoor life or night clubs.

He lives in Hollywood as he has lived all his life—in an apartment. It’s four rooms in size and ironically enough it’s only a couple of blocks from all of Hollywood’s swankiest night spots—Mocambo, the Trocadero, Ciro’s and the Clover Club. It boasts only one bedroom (housing shortage, you know), which is used by Eddie’s parents; and Eddie himself can be seen every morning by the paper boy sleeping peacefully on the pull-out couch in the living room. If the paper boy took the trouble to peer farther through the glass front door, he could see that the living room was furnished in tans and browns, and that there wasn’t a magazine in the house.

When the paper boy left he would miss the family scuffle over the bathroom every morning. He’d miss Eddie’s lightning-dressing act and dash for the studio. He’d never know that plump and peppy Mrs. Ryan, Eddie’s mother, rushes off every morning to business as does Mr. Ryan. He would also never know that neither of the Ryan parents need to work, because Mr. Ryan’s business in New York left them with a very pretty bank account; but that both of them just like being busy! In Manhattan, Mr. Ryan ran a credit checking business which investigated charge accounts to see if the applicants could pay up; but since the war and the abundance of ready cash, there was no more need for Ryan Senior’s business.

All day long the apartment is empty and at sundown the three Ryans come home almost at once They suffer no servant problem, for after they greet each other and decide which is the least exhausted—that one becomes the cook! Yes, Eddie, Mr. Ryan and Mrs. Ryan are all equally good cooks.

Eddie learned his culinary tricks while traveling on the road with various shows, and when he’s chef he comes up with mouth-melting roasts, eggs any style from sunny-side up to Eggs Benedict and apple pie that would make gourmets groan in envy. He calls “Dinner!” when it’s ready, and then he and his father both put on coats and the three sit down to eat. After wards, likely as not, the Ryans engage in a loud and violent game of poker. Or (just as likely) the three go off to a movie; for Eddie sees them all.

Girls? Well, of course; Eddie takes out June Haver and Virginia Weidler occasionally, and his favorite badminton partner is Ann Blyth. But the girls usually find themselves at a movie with him, too; and only once has any of them seen a night club in Eddie’s company.

His dream-date with some future dream girl he hasn’t yet met goes like this: In the morning, he rows her around a lake in a rented boat; after lunch, they go bicycling in the Hollywood hills; then some badminton, some Ping-pong—and after that, dinner, a movie or a baseball game, and more food!

all of this is pretty astounding simplicity for a kid who grew up in grease paint . . . for a kid, actually, who was headed for grease paint even before he was born. When Dorothy and Edward Ryan knew he was coming some twenty years ago in Brooklyn, Dorothy said to her husband, “If it’s a boy, I want him to be an actor.” And Papa agreed.

You can see that Eddie didn’t have a chance to dodge an acting career; and what’s more, he didn’t want to. At the age of three and a half he won the Baby Contest in Prospect Park, Brooklyn, and his picture appeared in all the papers dressed in a tiny policeman’s uniform, while he “arrested” a baby girl in a bathing suit. Jesse Lasky was one of the many people who eyed the picture fondly and by the time Eddie was four he was on his way to Hollywood—for two dreadful months of lonely oblivion before he and his mother came back to Brooklyn and Papa Ryan. There, by the time another year had passed, small Eddie could thumb through magazines to the advertisements for malts, cold remedies and soap—and see himself in most of them. For he’d become a model.

He was five years old when he was in his first Broadway play—“When Hell Froze,” with Jane Cowl. In it the young actor made his first faux pas. He knew every line in the show and when the great Miss Cowl forgot a line one night Eddie promptly told her about it. The entire cast, aghast, forced him to apologize to her—which he did manfully, although lisping a little! From then on he graced the Broadway boards in eighteen plays altogether, including “They Shall Not Die,” “Give Us This Day,” “St. Joan,” “French Without Tears,” “Let Freedom Ring” and “Watch On The Rhine.”

He was also in thirty movies, made on the East Coast, including all the Penrod and Sam comedies and in hundreds of radio shows, including “The Aldrich Family,” “Gang Busters,” “Let’s Pretend” and every soap opera going.

All of this theatrical whirlpool swirled around Eddie all the time, every day. Meanwhile, he managed to graduate from the Professional Children’s School, to which he gives all credit for his education. And every free afternoon you could have seen him on the parade ground in Prospect Park, Brooklyn, playing baseball with the neighborhood gang. It was baseball that finally aced him out of the Signal Corps, which he joined in 1942. The week before he completed his training, he got a leave and went like a homing pigeon to the usual neighborhood baseball game—only to twist both knees hopelessly out of joint in a wild dash for home plate. There followed two weeks in the hospital and then a medical discharge. And then, immediately, a screen test for “The Sullivans”—and Eddie was Hollywood-bound.

DUE to the fact that Eddie was in the theater constantly, he never had an opportunity to see the other half of his profession—Grand Opera, until he came to Hollywood. He took his baseball field glasses and appeared at the auditorium to see Lily Pons in “Lucia di Lammermoor.” He couldn’t get over the incoherent gestures of the leading man and the slowness of action. And while he enjoyed it, he still retains the theater as his first love.

The awful truth is that he was born thirty years too late—for his true love is black face. Leave him alone with a piece of charcoal, and his face is midnight-black at once—while he mimics his hero Al Jolson and patters jokes like the m.c. of a minstrel show. In black face, he spends many evenings at the Hollywood Canteen.

Naturally, when Eddie’s bent is toward black face and the excitement of the stage, he finds the sophistication he’s picking up in Hollywood a little tame. Learning to drive wasn’t exciting, for instance, because the first two cars he bought were too old to run. Each stayed doggedly parked before his door until he resold them; and then he finally bought the shiny blue sedan he now boasts, which is of later vintage and which does run. He learned to dance because a producer asked him to escort his daughter to her school party.

In the not-too-distant future, Eddie would like a life neatly divided between Broadway and Hollywood productions; a completely furnished wardrobe of clothes (until now, he’s been reluctant to build a wardrobe because he was still growing); and he’d like to be, in his words, “an American Claude Rains.” He’d also like to continue his education at a local college.

But most of all he’d like a chance to work out with the Hollywood Ball Park baseball team on week ends—and, eventually, a baseball-mad wife to cheer him from the stands.

Eddie, as we have said, is no sophisticate. But he’s a personality that stands out like the Statue of Liberty. And if his 2,000 fan letters a week mean anything—he’s as well liked professionally as he is personally, and that’s saying all there is to say!