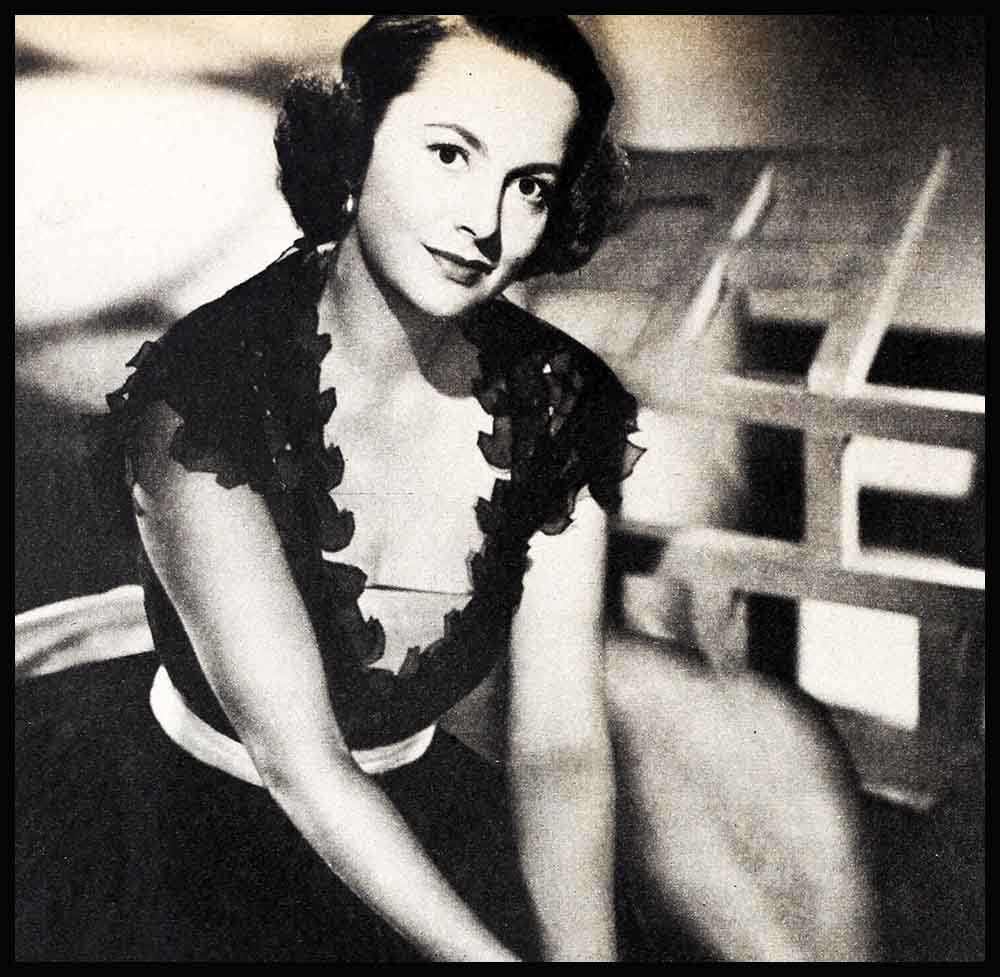 Wherever there’s beauty like Olivia de Havilland’s, romance can’t remain long dead. Although Livvy claims that she has turned her back on love, and the only thing that truly matters to her is her young son, Ben, her own warm nature—her love of life—puts the denial to the statement she made when I interviewed her recently:

“Romance? No, there is no romance in my life. And I don’t expect that there will be any for a long time to come. I don’t think it’s very becoming to throw your heart about casually, to go out too much after a divorce. I don’t think it’s right and I’m not going to do it. Besides, one needs time—time spent alone—to readjust to single life.

“I think it’s unnatural, however, not to have some kind of social life, and I have devised a wonderful system for going to parties. Here’s how: I find out from the invitation list what married couple is going that I know, and if they live nearby, I ask the hostess if she’d call and ask them to take me along with them.”

But Livvy’s been easing up on this strict self-chaperonage system lately. She’s been seen about town quite a good deal with Director John Huston, since he returned from Europe. And though she would be aghast at the very suggestion that there was anything romantic in these dates of theirs, all of Hollywood remembers that these two were once—not so many years ago—very serious about each other. And people can’t help wondering if this picking up of the raveled threads of that old love may be leading to one that will be rich and true and lasting.

In the meantime, though, Livvy shies away from the subject of marriage.

“Will I ever marry again?” she puts it. “I can’t imagine that I will, somehow. You see, my mother and father were divorced, and I was brought up by my mother, who married a second time. I didn’t get along at all well with my stepfather. Neither did Joan (Fontaine). We were absolutely foreign to him and he didn’t understand us at all. It was, to put it frankly, a very unhappy household.”

It was this basic friction, Olivia said, that probably led to the fact that she and Joan were estranged for so many years, and that both of them had felt distant toward their father, as well. But in recent months, the family has been reunited. When Joan married Collier Young in November, she invited their father to the wedding, and not long afterward, the two sisters met each other, and decided to forget their old feuds, most of which, they both agreed, were based on unspoken intangibles, the result of their disrupted home as children.

But bearing all the old bitterness in mind, Olivia is resolved that the same thing must never happen to her son, Ben.

“If I were to marry again,” she says, “it would be essential to my own happiness that Ben love his stepfather. I would have to choose a father for my son as well as a husband for myself, and that, as you know, is a difficult set of circumstances. This man, if he should happen to come into my life, would have to undergo a very long, engagement-trial period so that we could be certain we were not making a mistake. And where is there a man who could put himself through the ordeal of close scrutiny such as that, who would recognize and agree to the need for it?

“For the present,” Olivia says, “my life with Ben is very complete. For the first time in my life, I have a family, and that is pretty wonderful. Shadrach, my ten-year-old airedale is here after spending two years in a kennel in Long Island. And. of course, Ben and I still have Catherine, the Siamese cat who traveled all over the country with us when we were on the road in ‘Candida.’ And to round out our family, Ben brought a fish and a snail home from school—and he watches over Mr. Fish and Miss Sweatpea lovingly. Now, tell me, is there room for a man in our household?”

Olivia asks this question, but she doesn’t wait for an answer. For her lovely eyes are focused on the future, not the past. She’s looking ahead to a rainbow of bright days which she knows are there for the seeking.

When I asked her to tell me in her own words what her plans are, I was impressed all over again with the beauty, sincerity, graciousness and out-and-out goodness of this girl. She has glowing good looks without benefit of cosmetics and her dark eyes truly are “windows of the soul.”

To understand Olivia as completely as ever one person can understand another, it is fundamental to realize that at this period in her life she is first and foremost Ben’s mother. Her attitude in making formative decisions for the weeks and years ahead is dominated by the will to “do what is best for Ben.”

“Ben is the center of my life,” she says. “all my decisions will be keyed to him.” And Olivia is not one to speak lightly on matters of importance. She will, I feel sure, keep Ben uppermost in mind as she plots her life anew.

“You’re going to think I sound just like every mother when I say this, but really, Ben is a very unusual child, really unusual! He holds my interest completely. He’s so advanced mentally for his years that the head of the nursery school gave him a card that said ‘Happy Fourth Birthday.’ But he’s only three!

“Ben has definite mechanical leanings. I noticed it first when he was eight months old and had just learned to stand but not to walk.

“It looks like Ben’s future is all mapped out for him,” I said. “What are your plans for the immediate future?”

Without a moment’s hesitation, as if she had thought this through many times, Olivia replied: “First of all, I’m going to find a public school that I think will be right for Ben and then buy a house in that school district. I want it to be a rather small school, as much like a country school as possible.

“Although Hollywood has been my home for seventeen years, I have no particular roots any more. I like to live in a climate where there is a change in seasons. Perhaps Connecticut is my answer. Children lead a wonderful country life there—boating in the summer and sledding in the winter. Above all, I want to settle where Ben will have the greatest happiness.

“I might even buy a house on the Island of Guernsey (one of the Channel Islands between England and France). My ancestors settled there after going to England with William the Conqueror in 1066. I’m the first in my direct line never to have lived there. About ten years ago, the present generation let the de Havilland home on the Island slip into the hands of a princess, but it’s up for sale now and I’m seriously thinking of getting it back. It would be a wonderful place to live when I am ready to retire.”

I evidently showed my alarm by this reference to retirement, for Olivia hastened to add, “Don’t misunderstand me. I need and do want a long rest from the flurry of pictures I have been doing, but I expect to go on with my acting career just as long as I am permitted to do so. Aside from Ben, acting is my life. I’d be lost without it.”

Broadway, too, is in Olivia’s future. But when next she appears on the legitimate boards, she says, it will be in a play by one of the critics’ favorite playwrights. As Olivia puts it: “I did both George Bernard Shaw’s ‘Candida’ and Shakespeare’s ‘Romeo and Juliet’ on Broadway, both classics. The next thing I do should be, I think, a modern play.”

It was good to hear her speak out in this uninhibited way once again, for during the years of her marriage to Marcus Goodrich, newspaper people in Hollywood found that the once-cooperative and gracious Olivia seemed to be completely dominated by her husband and unable to speak freely or express her own personality. He made all decisions and frequently was abusive to representatives of the press and film magazines and to autograph-seeking fans.

Olivia de Havilland lived and breathed a script during the past six years, which had a perfect plot for an Olivia de Havilland movie: a trusting wife, an allegedly cruel husband, an innocent child whose life would be ruined if its parents were divorced.

The script reached its climax on August 26, 1952, when Olivia was granted an interlocutory decree from writer Marcus Goodrich. The divorce becomes final in August of this year.

When Olivia made the decision to end her marriage, she was exercising the kind of firm conviction she has always shown. And there is no question that she will continue always to do what she thinks is wisest for Ben and for herself. And this means that romance must come into her life—for romance is normal and natural for a beautiful and sensitive woman.

And that will be the happy ending. For this particular star, the script could end no other way.