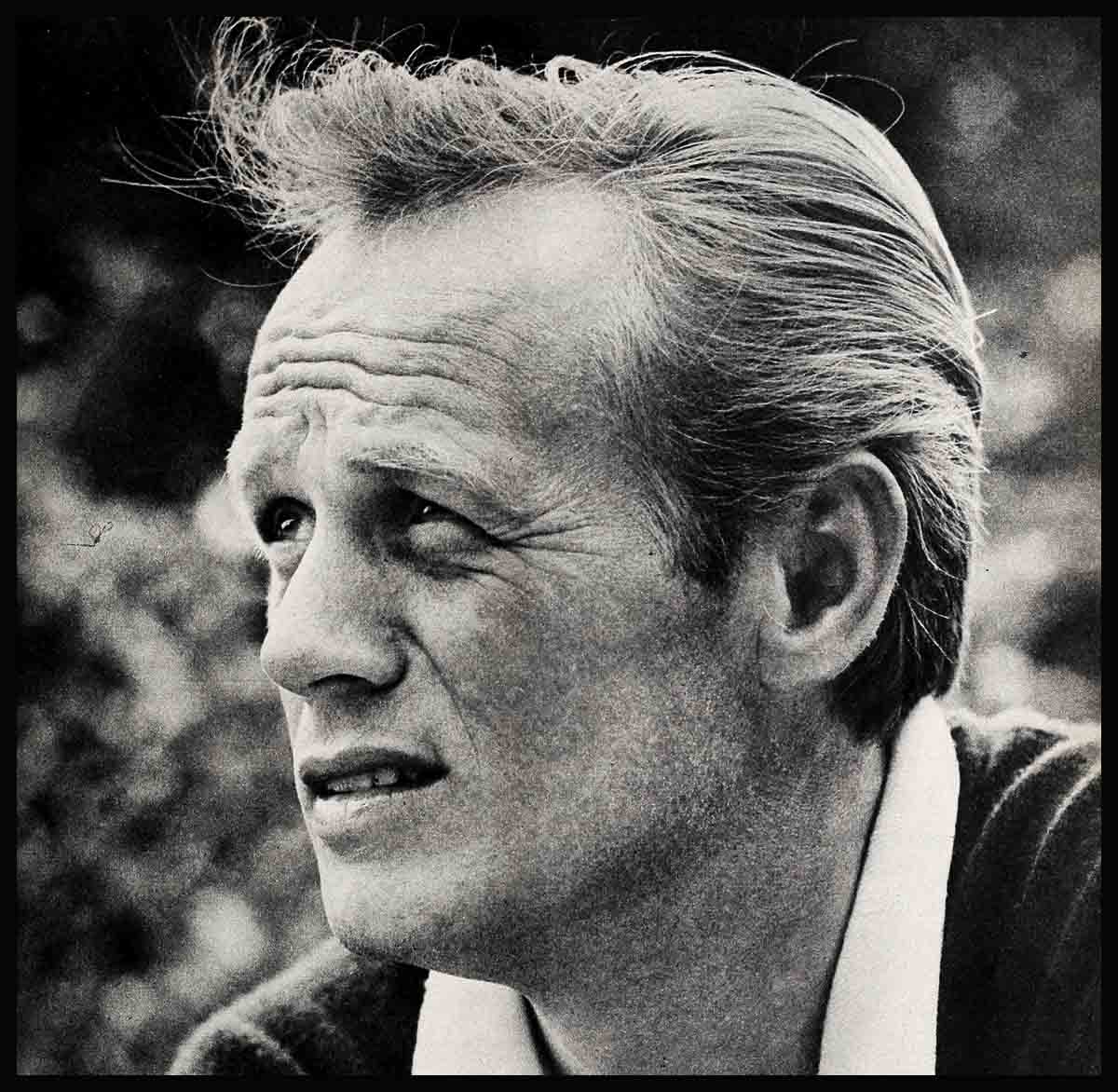 In the summer of 1947 in New York in an off-beat motion picture called “Kiss Of Death,” a young actor named Richard Widmark pushed an old lady down the stairs.

It was his film debut, and even in radio and the Broadway theatre where he had been plugging away for upwards of ten years he was relatively unknown. The options appended to his first picture contract were, he felt, so unlikely to be picked up that he didn’t even bother to tell his wife that the possibility of further film work existed.

He should have told her; Jean could have had a head start on the packing.

Fox released “Kiss of Death” in the fall of the year, people went to see it in droves and came away limp and raving about Richard Widmark. And then the phone was ringing in the little house where the Widmarks lived with their toddler daughter Ann, and it was the studio saying hurry on out to Hollywood and go to work.

Today, seven years and twenty-two pictures later—Fox having exercised every one of its periodic options on the Widmark services—Dick is once more his own boss, free to go where he pleases, work at what and for whom he chooses. With “Broken Lance” completed last April, he completed his commitment to Fox.

He is a free man, a happy man, and bursting with plans.

Even now in Sarrat, outside London, the Widmarks are living in an ancient and wonderful house called “The House Under the Heavens” while Dick works in Warwick Productions’ “Prize of Gold” which Mark Robson is directing in Berlin, Hamburg and London.

But don’t get the idea that Dick is running away from Hollywood. It was coincidence that his first venture on his own took him so far away. He is not one of those actors who agonize throughout their Hollywood labors as though they were doing penal servitude. He resents, he says, actors who moan that they must get away, get back to the theater, back to art and away from crass commercialism.

“This is home,” he said, looking about the pleasant gardens of his Mandeville Canyon ranchhouse just before he sailed for England late last May.

“No matter what I do from now on”—and he expects to do six pictures in the next two years, then a play—“If a good one comes up,” perhaps, ultimately, even some television—“This will always be home base. We have more roots here now than anywhere.

He is challenged by the opportunity to choose his own vehicles, but you will be disappointed if you expect from him any scornful denunciations of the people who have guided his career for seven years.

“Fox did a lot for me,” he says. “I hate the word, but they made me a saleable ‘property.’ They had the courage to give me a variety of roles—resisted the temptation to type me, even after the success of my psychopath in ‘Kiss of Death.’ They let me do a lot of pictures . . . an average of better than three a year. Occasionally we came through with a pretty good one. But good or bad, I learned something from every one of them.”

Gratitude is a sentiment all too seldom voiced by the frequently self-pitying human “properties” of the film factories, and when it is it comes, usually, in the nature of a bow to the security which accompanies a major studio contract.

This, Richard Widmark believes, is nonsense. “The only real security comes from a belief in oneself—and that goes for every man, whatever he does to make a dollar.”

He himself, radiating self-confidence, will make quite a few dollars in the coming months—for “Prize of Gold,” for instance, as many dollars as he was paid, under contract, for an entire year’s work!

Enjoying life, you begin to feel after a few minutes in the relaxed Widmark home, is pretty important to the three people who live there.

The big living room is warm with sunlight and bright with a good collection of modern paintings on the pale gray walls and bowls of spring flowers. The room looks lived in—and loved.

From a guest house across the garden comes the sound of a typewriter.

“Jean is writing a play,” her husband explains. “She works every morning, and again after lunch until Annie gets: home from school. It’s a pretty good play. Jean really has talent.”

He sounds almost envious and promptly admits that he is.

About as terrible, he indicates, as he was as an instructor in the dramatics department at Lake Forest University, in Illinois, where he taught after his own graduation.

“I was the world’s lousiest teacher,” he confesses, but, having wooed and won a wife during his college years, he was hard pressed for a job. “And Lake Forest, apparently, was equally hard pressed for an instructor.”

The newlyweds came to understand the true nature of security during those four years, and Dick quit his job to go on his own. In New York, he went the rounds of casting offices while Jean attended the American Academy of Dramatic Art. (The writing urge came later.)

Dick made “enough” money, and they had fun. When Ann came along they had “everything”—and they had never set foot in Hollywood.

“Annie is quite a girl,” her father says, and the look of pride on his face indicates that it is a prime understatement.

“She’ll be along in a few minutes”—the school bus brings her to the door from the Santa Monica Canyon school she attends—“and when she comes we’ll have to get out of here. She has to practice for her piano lesson.”

Annie arrived as predicted, a pigtailed charmer in a pinafore and starched petticoats, confidently displayed her “beautiful map of Australia” and a new arithmetic book and then marched determinedly to the piano. We got out of there.

“Annie is staging a small revolution about going to England,” Dick reported. “She went with us in nineteen hundred- and-forty-nine when I went over to do ‘Night in the City’ and she hated it. She missed her pony and her pals on the block, and this time it will be worse—the Brownies back here at home will be having picnics and beach parties while all she has to do is to look at a lot of old castles, and in addition to her horse—the poor old tired pony is almost too old to ride by now—she’ll have her two dogs, Trigger and Choo Choo, to worry about.”

Only when the Widmarks induced their friend, Ollie Carey, to take over their house—and their pets—during their absence did Ann soften her attitude, Dick says. “Annie knows Ollie is as silly about animals as she is.”

But she relented only to a point. She insists that she will not go to school in England, and her father has promised to get her back home in time to go to school with her friends, even if he and Jean decide to stay in Europe for a few weeks after the picture for a long-awaited vacation.

Vacations figure as largely as work in the plans Dick is making for his life now that he is running it.

The family owns a “joint back in Massachusetts”—actually a wonderful old house in the center of a hundred acres, mostly woods—in which they have never had a chance to live. They may decide to furnish it—their furniture from the old, New York house has been in storage since their hasty departure for Hollywood seven years ago—and spend some time there when Dick is between projects. That is, if they can gain Annie’s consent.

Annie is a powerful lot of person for her scant nine years, and, her parents are certain, loaded with talent. What kind of talent no one knows just yet. Her father is hoping that it won’t be acting.

“This business, especially movies, is too rugged for a girl,” he feels. “It’s so competitive, so ego-maniacal that it makes a woman more aggressive than the most masculine man. Whatever she’s selling—whether it’s a personality or a big bust—she can’t relax for a moment.”

And without relaxation, this relaxed man implies—and if he is ego-maniacal he conceals the fact skilfully—there can be no “fun.” No security. No happiness.

It was time to go. Almost time for Richard Widmark to go away from Hollywood, now home base.

He was excited about the big new program on which, as an actor, he was embarked, you could see that. But, as an actor, he, like Annie, seemed to be resisting progress just a bit.

The sun was bright, and the garden was full of flowers, and he looked at his home with pleasure and pride.

It is a quote. PHOTOPLAY MAGAZINE AUGUST 1954