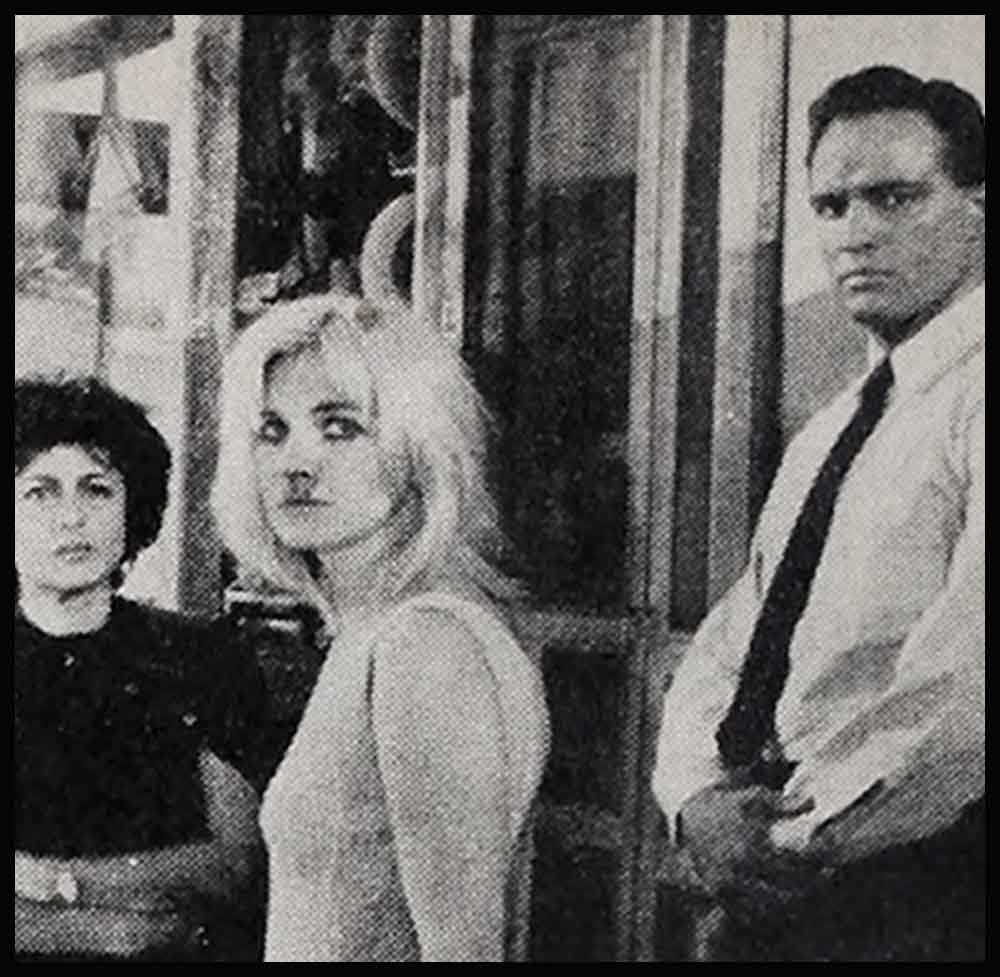 Three high-powered personalities—Marlon Brando, Anna Magnani and Joanne Woodward (pictured above)—go into high gear, with the result you feel as if you’ve been crashed into the middle of a nightmare. Marlon’s a thirty-year-old who believes he has wasted all his young years. (At least. that’s the way it sounds; this character has a terrible time putting his ideas into words,) Looking for a fresh new life, he drifts into a small town—but ooh, did he pick the wrong place! This town is so deep in the heart of Tennessee Williams-land, that the people are even nuttier than the writer’s usual creations. Joanne is a bedraggled. rebellious, desperately unhappy drunk, and even though, at first, Anna seems refreshingly normal when she and Marlon are drawn together. she admits she’s “filled with hate” for the brutal citizens who killed her father. But we had to admit, under Sidney Lumet’s direction, the story is like a strange, dream-like spell. ADULT

Have you caught “Stagecoach” on the late. late show? Well. here’s a rousing British thriller that follows the same classic pattern, though its Indians live in India, where, incidentally, the movie was shot. The formula: Round up a miscellaneous bunch of people and send ’em on a trip through hair-raising danger and watch how each one reacts. Around 1910, with civil war blazing in the hill country, British officer Kenneth More is assigned to get a five-year-old Hindu prince to safety, away from Mohammedans who want to kill the child. Instead of a stagecoach, we have an ancient, wheezing railroad engine that hauls one coal car and one battered old coach. With Lauren Bacall as the little prince’s spirited American governess, we have just about every shade of political opinion aboard. And we’ve off on a wild ride that gives two hours-plus of spectacular thrills. FAMILY

If you can stand a jolt, a movie that’s intensely personal and frighteningly real. try this one. It’ll be very much worth your time as it takes you inside the mind of Barbara Baxley, a young woman just divorced and utterly lost. Through “the savage eye” of the camera, wandering around Los Angeles with her, you’ll see people as she sees them—all ugly. But, as the film moves on, you finally realize that the picture’s creators (Ben Maddow, Sidney Meyers and Joseph Strick) have something much gentler to say and. except for one scene, the action is wordless. You hear instead Barbara speaking her troubled thoughts and the quiet voice of her conscience (Gary Merrill’s voice) calling her to sanity. ADULT

Do you think labor-management relations is a pretty solemn subject? Strictly for school discussions? Wait till you see the hilarious shambles the British make out of it. with a performance by Peter Sellers that’s a deadpan masterpiece. Ian Carmichael, who nearly wrecked the British Army in “Private’s Progress,” now does the same for British industry—all with the best of intentions. He’s a nice fellow, you understand; just not extra bright. Worse yet—he’s honest. As a new employee in a missile factory, Ian runs afoul of Sellers, the shop steward, who’s given to calling strikes to make sure his union members will keep getting more money for less work. As for top management, it’s thoroughly crooked. The picture plays no favorites, just lets everybody have have it right where it hurts. ADULT

Guerrilla fighting in Yugoslavia during World War II provides plenty of violent action, but sympathies are blurred. The five women of the title have had their hair cropped off by the partisans, as a penalty for fraternizing with a handsome Nazi (Steve Forrest). Outcasts, they must join underground forces led by Van Heflin in order to survive. The unhappy heroines all seem strongly individual characters, thanks to good international teamwork by Vera Miles, Barbara Bel Geddes (American), Silvana Mangano, Carla Gravina (Italiani and Jeanne Moreau (French), and are worth worrying about. ADULT

Delightful surprise! There’s a fresh comedy idea in this fable about an Anglo-American show-biz couple (Max Bygraves, Shirley Jones) and their angel-faced infant (Steven Stocker). Baby Bobbikins suddenly starts spouting better English than his old man can speak. The astonished Max tries to tell Shirley about it—and promptly lands on a psychiatrist’s couch, because the kid won’t say a word when anybody but Max is around. Then the toddler’s secret talent is put to amusing use. Along with the fun, there are songs for Shirley and Max, who’s a cheerful favorite in British musical comedy. FAMILY

While yesterday’s wars sometimes seem colorful and exciting, somehow modern warfare looks drab and tragic and utterly confusing, like this closeup of World War II in China. The Japanese are advancing, and a small group of retreating American soldiers, led by James Stewart, is ordered to block the roads by demolition, cutting off the escape route for the terrified civilians. The story tries to make a plea for international understanding, compares Stewart’s thinking—he shows absolutely no imagination—with Lisa Lu, as a sensitive Chinese lady, and Glenn Corbett, as a sympathetic American. But no matter what. you’ll want to see more of that good-looking Glenn. FAMILY

We seem to be all set for a lively big musical, with a smart showman like brash little Eddie Hodges playing a runaway who goes rafting down the Mississippi a century ago. But the scant bits of music get brushed off before they’re finished, and all that’s left is some mild humor about Eddie’s difficulties with two con-men (Tony Randall and Mickey Shaughnessy). Any resemblance to Mark Twain’s story is strictly accidental. Nobody in on the movie seems to have read the book, except perhaps fighter Archie Moore, who shows some flashes of dignity as the slave Jim. FAMILY

The Battle of the Sexes (CONTINENTAL)

It’s a small classic that gets tossed away this time, as the British move James Thurber’s short story “The Catbird Seat” from the U.S. to Scotland. Still, it’s hard to complain whenever Peter Sellers is charming the audience with his siy humor. He’s a prim, precise and utterly loyal employee of an old Edinburgh tweed firm. When an American efficiency expert (Constance Cummings) starts breaking up the stodgy but happy routine, Peter is forced to desperate measures. Too bad comedy isn’t as subtle as the acting. FAMILY

Though this spectacular adventure fantasy is Soviet-made, there isn’t a trace of modern propaganda in its rambling story of a legendary hero of the Middle Ages, played by husky Boris Andreyev. Instead, there’s an appealing fairytale atmosphere about the mighty peasant’s battles with barbarian invaders and mythical monsters. The castles and the costumes and the warriors’ weapons make you think of faraway places and long-ago times. Most of the English dialogue is pretty stiff, but its quaintness somehow fits in, and there aren’t too many words breaking up the action. FAMILY

In the Wake of a Stranger (PARAMOUNT)

Guess the British are paying us a compliment with this brisk little melodrama—it’s a murder-suspense yarn in the fast American style. But there are some interestingly different British touches: the grim streets of the Liverpool waterfront; the character of a bookie, whose profession is perfectly legal over there and is announced in an office sign reading “Turf Accountant.” The Plot? As a young merchant-ship officer, Tony Wright behaves like the traditional sailor ashore, and when he wakes up the next morning, he’s not only miserably hung over, but thoroughly involved in a murder case. Pretty schoolteacher Shirley Eaton tries to help him clear himself. FAMILY

I Passed for White (ALLIED ARTISTS)

A drama that isn’t very believable makes its bid for your attention with a provocative title and three attractive young newcomers to movies. Remember James Franciscus as the junior hero of “The Naked City” on TV? And opposite him is Sonya Wilde, who has to contend with the shakier angles of the plot. She plays a part Negro girl who “passes” in order to get better job opportunities, then falls in love with a rich white boy and marries him with almost no advance planning. As a sympathetic friend, Pat Michon shows a sprightly, likable personality. Too bad that, in being so nervously anxious to avoid offending anybody, the movie just may wind up by making everybody mad. ADULT