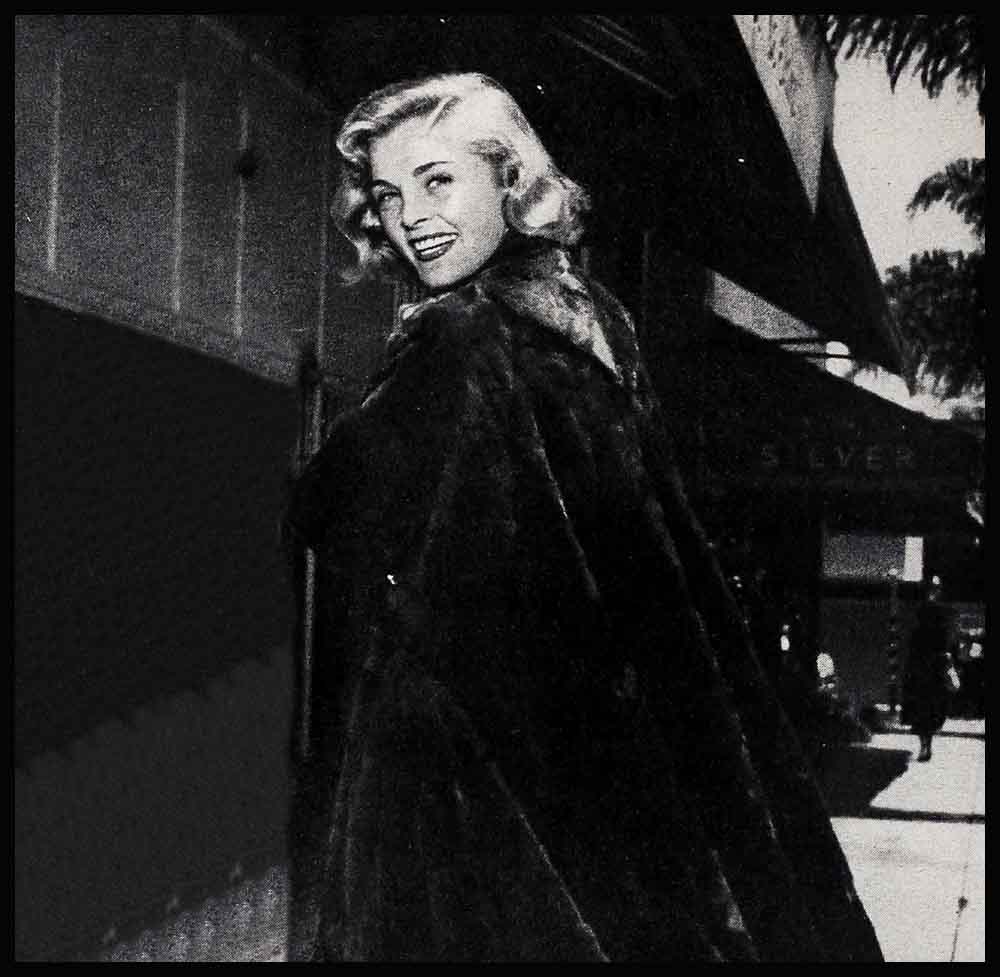 “Gimmicks” are always a fashion fun-fest—but never more so than this season. Whether it’s earrings that dangle practically to the hips, or the whim of wearing one earring on one ear and the other at the neckline—or toting a muff of feathers, flowers or fur—the “gimmicks” are conversation-makers.

Piper Laurie goes for those smaller-type earrings—if they shine like mad. She has a pair of star-shaped rhinestone ear clips; wears them both, but pins a matching, much larger, identical star either shoulder height on her dress, or on the wrist of long, dressy gloves.

Dotty Lamour goes for the “gimmick” stockings created by Willys of Hollywood. She skips those with the rhinestone clocks, etc., and wears (but only with simple black cocktail clothes) his sheerer than sheer black hose that has beaded gold hearts just above one ankle. And with these she wears little gold heart-shaped earrings and a huge gold heart clip.

Sure was a great welcome home for Cesar Romero (who’d been picture-making in England) when, after just a week back in Filmtown. he opened on the stage here, starring in “Strictly Dishonorable.” Among his chums and others who gave him a really exciting “debut” were Anne Baxter and ever-lovin’ John Hodiak, Richard and Mona Carlson, Nancy Sinatra (who’s been having quite a few dates with Bob Walker), Joan Caulfield and Frank Ross. Cesar’s leading lady in the show, Marilyn Erskine, did so well, she’s being screen-tested. You’ll be seeing her! Few knew, until we uncovered the “news” in our daily column, that Marilyn had briefly been the bride of producer Stanley Kramer. When he and starlet Ann Pearce were wed a few months ago, everyone thought he was a bachelor!

Premieres and parties in Filmville notwithstanding, the most glittering event of the month around here was really the opening of the Sadler’s Wells Ballet in Los Angeles.

And we sho’ mean glittering! There were so many diamond chokers and necklaces on famous femme throats, we were almost blinded! No, kiddies, we don’t mean rhinestones! Sylvia Gable sported a diamond necklace of huge stones. It was right at the throat but there were triple loops of the gems in a lovely design, hanging down quite a bit further. Her gown was strapless, very decollete, tight-draped bodice, long full skirt. The material was pale gold brocade, with tiny blue flowers in the pat tern. Really set off her blonde hair, which Mrs. G. is still wearing in a long, long bob. Clark (who beamed both upon Sylvia and the ballet) likes it that way. The Gables were with the Ronnie Colmans.

Benita Colman wore long, dangling diamond-and-sapphire earrings to go with her gown of bright navy blue heavy satin—very simple, with a side pannier. Maureen O’Sullivan looked like a dream of the ballet itself, in her ballerina length dress of white tulle, its tremendously full gathered skirt topped by a skin-tight, off-shoulder bodice of white satin. Irene made Maureen’s evening wrap of black velvet. The combination was as striking as any furnished by lavish furs over frippery.

Clifton Webb hosted Vivien Leigh and Laurence Olivier and had Virginia Zanuck (ablaze with a fabulous choker composed of large diamond flowers) on his arm. Darryl was working late at the studio. Missy Leigh’s very short, shingled hair-do got a lot of comment, but not nearly as much as her gorgeous gown of white ribbed silk, with a trickily pleated skirt, and a bodice of white, embroidered all over with gold threads. Vivien’s wrap was a mink stole. Betty Hutton’s gown was ankle length and of black satin with a bodice of gold lame.

Greer Garson’s red hair never looked more lovely than at the Ballet opening. Her gown of pearl gray satin, trimmed with tiny crystals and pearls, and her matching wrap of gray satin trimmed with gray fox, really set off the titian tresses!

The “velvet gals” most outstanding were Patricia Morrison in strapless black velvet ball gown, covered by the new “black mist” mink—a cape of it—and Joan Woodbury, in royal blue velvet and white mink stole. The white mink was a gift from spouse Henry Wilcoxon after he finished “Samson and Delilah.”

Hollywood’s loss is the gain of Paris, because hat-maker Keneth Hopkins has skipped our town to open a new salon in the French capital and expects to be away quite some time. One edict of Keneth’s, before taking off, reiterates what we said last month Hats must be anything from small to tiny! Among his new ones that are almost “Juliet-cap” type, is a darling, tiny, head-clinging topper fashioned of small, over-lapping black velvet leaves, each studded with a tiny silver sequin or rhinestone. This “cap” sits back on the head, is tilted much to one side, so that some of the leaves droop from the hat’s rim, well down over one ear. Very fetching!

This may be one turrible blow to the bobby-soxers, but John Derek, just turning twenty-five, is getting verreh, verreh gray at the temples. Golly—it’s becoming, though. Remember when Shirley Temple startled a lot of people by pulling out her first gray hairs at the age of eighteen? Shirley looked darling at La Rue one night with Charles Black. She was wearing a dress that wasn’t a suit—yet a suit that isn’t a dress. Meaning a lovely sheer wool of a soft blue—its all-over simplicity giving an almost tailored effect. Straight, very slim skirt, featuring a huge, bulging pocket over the right hip, the rather snug, tuck-trimmed top, belted at the waistline with navy blue kid. Over this went a matching blue wool coat (shorter than hip-length) that was long-sleeved (natch), shawl-collared, and the jacket, too, had a bulging pocket at its hemline, just above where the one on the skirt and the dress was! So y’see—the two worn together make a darned good-looking light-weight “suit.” But the dress will do just fine by itself, or under furs—any time of day.

Sonja Henie and husband Winnie Gardner went all out for glamour recently when they had Gene Tierney, Jennifer Jones and David Selznick. the C. Gables, Loretta Young, Joan Crawford (with writer Mel Dinelli) and a few others to a sit-down dinner. Her table always looks so lovely—its wonderful silver and linen were enhanced by those ornamental antique birds of various sizes that she bought in Europe. They’re of real gold, dull with age, and crusted with tiny, genuine rubies, sapphires and emeralds! There was a group of Hawaiians strumming and softly chanting throughout the meal—just a few feet from the dining room.

When the Edgar Bergens dined and wined the Dick Powells, Roz Russell, Fred Brisson, Gene Tierney, Harry Crocker, etc., a young magician furnished fun after dinner. Then Edgar furnished a few magic tricks himself, followed by showing his guests a lot of old-fashioned movie slides from a projector. Much laughter at the old, corny scenes of starry nights, lovers, moonlight courting—and while this was going on, Dick Powell sat on the piano and in real old gooey style, gave forth with songs to match.

So, with gimmicks, glamour gals and get-togethers, Hollywood goes its glittering way.