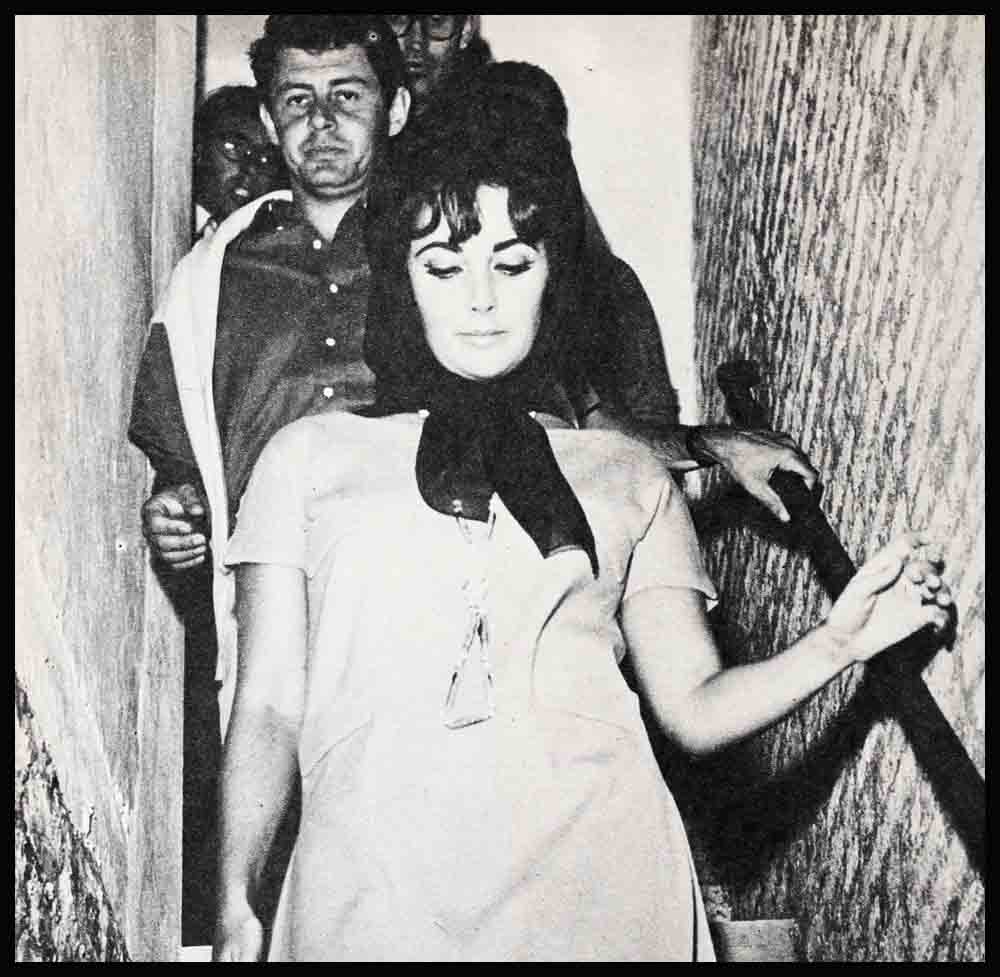 Why Liz Is Gaining Weight?

The rumors started an ocean away—in the Italian press, to be exact. Elizabeth Taylor, they said with Latin directness, is expecting a bambino. The Hollywood Trade Paper s on this side of the ocean put it this way: The reason Walter Wanger is rushing (my dear!) “Cleopatra” is because Liz Taylor is waiting for some good news from her obstetrician.

From these two somewhat questionable beginnings, the rumor then made the quick rounds of The Clan’s telephone-equipped Dual Ghia cars to the chic, and even un-chic, cocktail bars.

Everyone is talking about the poundage the pulchritudinous Queen of the Hollywood Nile is putting on. It is even alleged that the folks at the White House and the couple in the Kremlin are scanning recent pictures of Liz. That’s how important this rumor is!

And everyone. even beauty parlor operators, are saying knowingly, “What more can happen to that ill-starred picture?” The boys in outer space will tell you that it’s going to take at least a year to complete and release the historic epic. Now, if that rumor about Liz and the big bird is true, it will mean still another postponement for the picture at additional astronomical cost to 20th Century-Fox. Let’s face it, 20th is already up to their eyebrows with banks and insurance companies, and Liz simply is not the kind of fair-weather actress to pull an Act-of-God stunt in the middle of a major studio’s financial crisis. I mean she’s simpatico and all that jazz—even if she does want her own hairdresser, her own makeup man, her own designer, her own director, dialogue writer and her own doctor over there. But look at it this way: If she’s going to make Cleo the most unforgettable wench you’ve ever seen on the screen, let’s let her have her little idiosyncrasies and be grateful at that.

But to get back to the rumor. I mean, that’s why you’re reading this, isn’t it? Well, this is probably the way it happened. Someone saw Liz in one of those voluminous cocktail dresses she affects, but really shouldn’t, and her face and chin looked full in shadow. And since the dear girl isn’t in the habit of confiding in, or even conversing with, the scriveners of gossip and pure conjecture, they probably jumped to the conclusion that those no-waistline dresses, that undainty-like appetite could add up to only one thing nine months from now. That’s probably how the rumor was born.

All around the world

As for how it got around the globe, well that’s as easy as pizza to figure out. Someone —an overseas operator listening in on a bad Rome connection maybe—heard snatches of conversation about rumors, baby, yes, wonderful, we’ll let you know, and immediately spread the happy news to her friends, who soon spread it to theirs. Get the picture?

Of course, she is gaining weight. (Liz, you dope, not the overseas operator.) She’s taken on at least ten pounds if my X-ray eyes can add avoirdupois properly. Now you know that gaining weight is easy in Italy. Ask Sophia Loren.

The thing of it is that that pasta is soooo delicious and soooo nutritious. And when your doctor tells you to start eating, girl, I mean a girl ought to listen to her doctor, shouldn’t she? Especially when she’s paying him all that money and bringing him over to Italy and all that. And Dr. Kennamer wouldn’t take any fee if Liz didn’t pay him any mind. For heaven’s sake, he wouldn’t be paying house calls a continent away if he didn’t think he could help his star patient. I mean he has lots of other bright lights for patients back in Holly- wood, and he wouldn’t just leave them all stranded without aspirin and advice—just for a jaunt to Italy. He’s been at her side on business. Serious, keep-alive-and-healthy business. Make no mistake about it! So my dears, when the good and good-looking young bachelor medico tells Liz to eat plenty of pasta, she eats! And when she eats all those oh-so-divine dishes and washes it all down with the marvelous vino de tavolo (water is taboo in Italy even for washing teeth), she is just following doctor’s orders. Because, you know there’s lots of location work to be done in Italy, Egypt and England, and winter came on like gang- busters, and a girl has to be well insulated to withstand that rugged foreign weather. One simply has to be careful! Particularly a gal as cold-catching as our Miss T.

But to get back to the rumor (the one about Liz being pregnant). Well, it seems she and Eddie are playing it real cozy (between themselves) and real cooool to everyone else. They won’t say yes, they won’t say no. Which means they aren’t saying anything, if you’re any kind of psychoanalytic buff. But do you blame them? In the mean- while, Eddie just loves squiring his superlative squaw to the best beaneries over there. Why they even have violinists following them out to their little old limousine. Isn’t it all just too “Love in the Afternoon” and all that? Think! Just think what that picture can do for the violinist! Why he’ll be playing in Lester Lanin’s society band at the April-in-Paris Ball next year, if you understand these esoteric who-killed-society-type jokes. So there you are, kiddies. You can get ready to put this magazine back on the coffee table for a while.

The facts are these: Liz is gaining weight . . . on doctor’s orders!

And oh, yes, don’t forget this. When a girl is happy in love (Liz is, she is!) and she’s getting one million long Lincolns (she is!) for doing the work she absolutely adores (she does!), and her children are safe and snug at her rented hearth (they are!) and the animals are nuzzling around underfoot, she’s got the whole potful of ingredients for contentment. And you know how contentment spreads itself around!

Seriously—it would be nice if the stork rumors were true. Nothing would make Liz and Eddie happier. But there are serious complications—medical and technical and nobody’s business but theirs. So why don’t we let them keep it sacred and private?

Take it from me, if Liz were about to be- come a mother, she’d be the very, very first one to sky-write the news just the way they do those soft drink ads over Burbank and Brooklyn. That’s the kind of gal she is. Straight and forward. Together they spell straightforward. She’s not coy or secretive, and she doesn’t go running to tell anyone the big news before she tells her husband. (And some movie stars do—honestly!).

So settle back and relax or go do your homework or housework or your shopping. But don’t go buying any pink or blue wool or knitting needles, because Liz Taylor is not going to have a baby.

She is, God willing, going to finish “Cleopatra,” with her usual professional flourish, collect all that beautiful loot (less a whole lot of taxes!), pack up all her clothes and Ioved ones, hire “The Good Ship Lollipop” (or maybe even the Leonardo da Vinci) and float right back to that good ole California sunshine. And chances are (we’ll make a sizable bet!), that when she does arrive back on these shores, she’ll be her old svelte self. Not because she’s disobeyed the doctor’s orders, but because making movies is hard work. The weight that Liz put on before she sailed on that barge will have gone with the Nile.

And what will Lizzy do in California? She’ll loll there till Academy Award time rolls around in 1963—then she’ll go on stage to collect her second Oscar. Wanna bet?