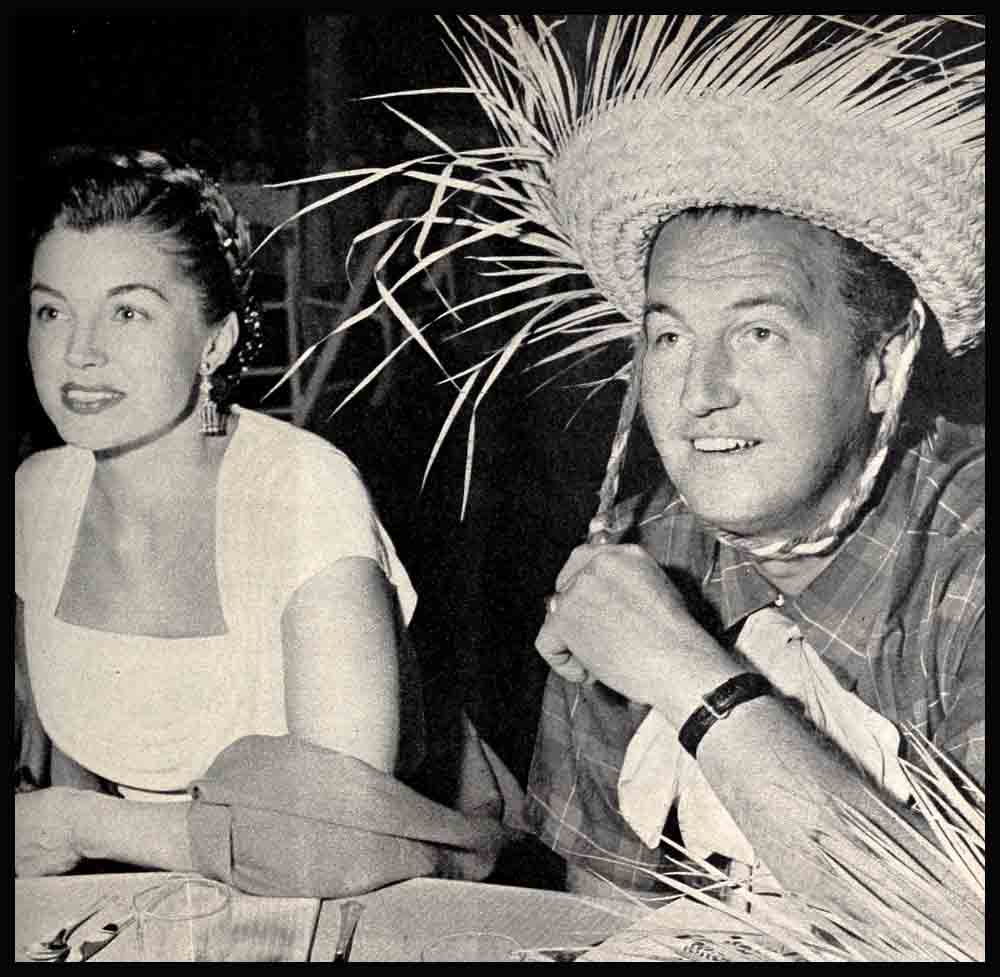 What Hollywood Is Whispering About?

“They just seem completely bored with each other.”

“She won’t listen to anybody!”

“When they go out for an evening of fun he usually ends up by making someone angry.”

That’s the sort of thing Hollywood is saying about Esther Williams and her husband, Ben Gage. Hollywood rumor often has had Esther and Ben on the point of separation. This rumor hits full force about once every year, and recently three columnists had the Gages ready to call their marriage quits. Career troubles had finally been too much for them.

But career troubles were one of the things Esther and Ben considered seriously when they were first married. Early in their marriage, Esther said, “We have no career complications. Ben is great in his own field—radio. And he’s very understanding about the problems and the demands in mine. The only thing that gives us any trouble is the fact that my work demands that I travel a lot for personal appearances. But Ben understands this and has adjusted himself to it. He refuses to let us be separated. Between radio shows, he just gets on a plane and joins me. The day he stopped flying to me, I’d stop going.”

Hollywood gossip, however, points out that Ben’s radio career is a thing of the past, that more and more his activities are tied up with Esther’s, dependent upon her decisions. His position is no match for the glamour of Esther’s position as a Number One money-making star on the M-G-M lot. And no man likes playing second fiddle—hence all the recurring rumors of trouble between Esther and Ben.

Reports of Ben’s behavior in public have done little to cement any belief that he and Esther could be happily married . . . and right there seems to be the root of the trouble. For each time a columnist hears of a public incident involving Ben and Esther, the report that they’re heading for separation and eventual divorce is rushed into type.

Not long ago when Ben was reported to have enlivened the scene at a Beverly Hills restaurant by insulting other diners, a close friend of the Gages said, “It’s perfectly natural. He has to assert himself in public one way or another. And in spite of what you may read in the papers, Esther understands this.”

At one time, Ben probably envisioned their restaurant, The Trails, as the locale for a show which he would produce and perform in as a singing star. But during the months and years of its operation, it has become an eating place, which Ben manages, and not a showcase for himself.

“Esther likes to give the impression that she knows nothing about the dollar (Continued from page 45) and business, that Ben’s the big brain and she’s the helpless little woman,” this friend continued. “But the truth is, Esther is one of the best business women Hollywood has ever seen.” And filmtown gossips say that she is making more and more of her own decisions, perhaps brushing aside Ben’s opinions and showing that she doesn’t have too much respect for his judgment; this, if true, would naturally deflate his ego. For, over the years, they have had a working, share-and-share-alike marriage.

But Esther and her own ego today are an item to be reckoned with. She is considered domineering around people she’s worked with for years, and for that reason is becoming more and more disliked. A studio worker who has been associated with Esther on many of her pictures recently said, “She won’t listen to anybody!”

It would probably surprise and perhaps even hurt Esther to know how disliked she is by many people who know her. Last year, the Hollywood Women’s Press Club voted her the “least cooperative” actress, and this year, she has shown small improvement. Interviews are cancelled, photographic sittings changed to suit her own convenience. Sometimes she is accused of snubbing people. Her friends say, however, that this is unfair, that Esther is extremely near-sighted and cannot see any distance without her glasses—thus she sometimes fails to speak to people, and they mistakenly think she is snubbing them.

The basic problem for Esther and Ben seems to be an adjustment of egos. But even about this, Esther is objective and clear-headed, which doesn’t make for warmth. In fact, some say, she is so clearheaded and cool that the real battle of their marriage is the battle of boredom. And no one has hinted that either Esther or Ben is interested in anyone else.

Regardless of rumors, Esther and Ben go on maintaining their own family kind of life. For Christmas a year ago, for instance, they planned to go to Acapulco on a vacation with their children, Benjy and Kim. But they decided to vacation in Honolulu instead—and for a very homey and touching reason. Little Benjy’s nurse, whom they had engaged when Esther was on location in Hawaii, wanted to go home for a vacation. So the Gage family went to Hawaii to insure the nurse’s holiday.

On the first day of Esther’s most recent picture, “Dangerous When Wet,” Esther pointed to a plant in her dressing room. “Ben doesn’t send me flowers any more. See, he sends me a plant that I can take home and put in our garden. That shows you how permanent our marriage is.”

One constructive thing about the rumors that crop up about Esther and Ben is this: whenever the rumors start circulating the Gages seem to become more aware of their marriage, of what they have together. Esther and Ben become more determined not to let anything destroy their marriage. Esther seems genuinely hurt at the rumors, seems determined to do everything possible to refute them. At the Marion Davies party for Johnnie Ray, the Gages appeared very lovey-dovey, as if in answer to the gossips—to all the stories of strife, boredom and dissension.

A few years ago, before Esther hit stardom as she knows it today, she spoke of her marriage in these terms: “If you keep your sense of values and stability and remember what you wanted in the first place, you’ll be okay . . . if you just remember the road you started on and stay on it.”

Perhaps the recurrent rumors of trouble remind Esther of that road . . . and how important it is for her happiness and for Ben’s not to veer off it.