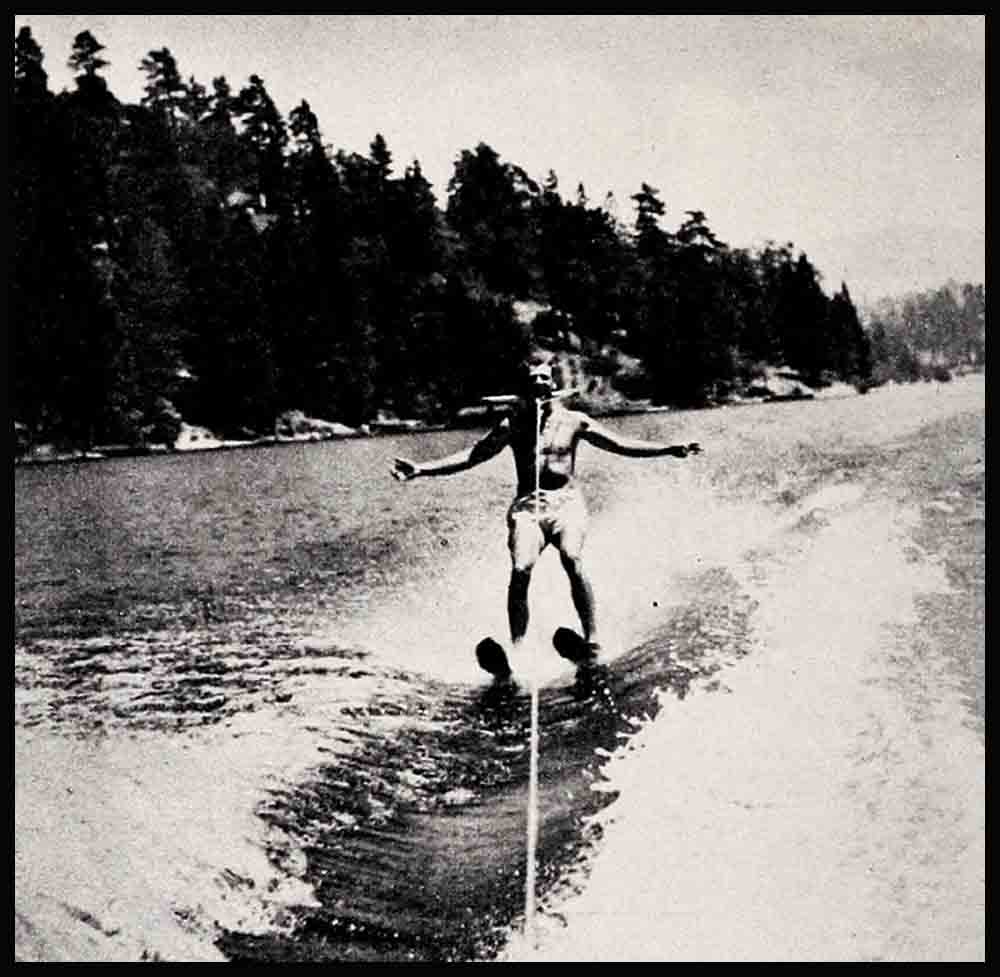 “He started to sing as he tackled the thing That couldn’t be done, and he did it.”

This was it. His first day’s shooting on “Mother Wore Tights,” his first chance to hoof before the camera, his first scene with Betty Grable.

Six-feet-four wasn’t kidding himself. No one—nothing could really help him now, except what he’d garnered from those years dedicated to hard work and experience. This was “opening night” in Dan Dailey’s private show world and each two hundred and ten pounds of him knew it.

It was Betty Grable who recognized certain occupational symptoms. Even on black Irish Mondays, Dan appears to be easygoing. His Bing blue eyes (Crosby, that is) sparkle. He’s a casual yakker, his funny friendly features crinkle at the least provocation. As they broke for lunch, the girl who hoofed her way up from Paramount musicals put her arm through Dan’s and walked him ahead of the others.

“Look Dan,” Betty said quietly. “I understand how you feel. I know you are nervous but don’t hold back. If this is the chance you’ve been waiting for, make the most of it. I’ve got mine. Now you get yours!”

At long last, Dan is getting his. In big fat delightful doses. When “Mother Wore Tights” was released, there was Dailey bread for exhibitors ali over the country. Quicker than you can say Mister Zanuck, they changed the billing of his second picture to read: “Twentieth Century-Fox presents Dan Dailey in ‘Give My Regards to Broadway.’ ” Currently, he and Jeanne Crain are co-starring in “You Were Meant for Me.” Dan’s in there hoofing his heart out and loving every moment.

Dan Dailey was born to be a hoofer. He knew it at the age of six when he appeared in his first minstrel show. Rhythm pounded in his brain, coursed through his body. From burlesque to Broadway, tank towns, one night stands, cheap hotels, flop houses. Dan’s known them all.

“I came so close to clicking many times,” says Dan. “But something always happened. The reasons were legitimate but finally I got tired of trying to alibi. Half the time people don’t believe you anyway. It was more important to believe in myself. Strangely enough, I always did. When my hope wore thin, I’d read a poem I’d found in an old newspaper while warming a bench in some booking office.

‘Somebody said that it couldn’t be done,

But he, with a chuckle, replied

That maybe it couldn’t, but he would be one

Who’d never say no ’til he tried.

So he started right in with the trace of a grin

On his face; if he worried he hid it—He started to sing as he tackled the thing

That couldn’t be done, and he did it.’

Then I’d remember the words of a man who was a great influence in my life.”

Dan was seventeen at the time. Born in New York and brought up in Baldwin, Long Island, he wasn’t exactly a dream boy to his family. Dan Dailey Sr. had little patience with a son who wanted to be in show business. Dad Dailey was a hotel man, who had rented too many rooms to too many unemployed actors! Young Dan’s mother was more sympathetic.

“Everything’s fine now,” grins Dan. “As I look back I don’t blame my father. I was well on my way to being a typical Seventh Avenue hoofer and he had seen too many of them get exactly nowhere. One day Dad went to see his friend, who for many years had been a combined counselor and philosopher for the Metropolitan Life Insurance Company. Dad told this practical idealist about his scatterbrain son and asked him to have a talk with me. Naturally I was on the defensive, but I finally gave in.

“That’s when I met Vash Young (he wrote ‘A Fortune to Share’), a friend who has helped many men to reorganize their minds and better their lives. I was ı encouraged to talk, so I poured everything out. I told Vash Young I had to be a hoofer and why I had to be a hoofer. When I finally finished, he said he was on my side and that’s what he was going to tell my father! This was the first real encouragement I had ever received.

“But that wasn’t the end. Vash Young pointed out how I was defeating myself, eating my heart out, and therefore only giving fifty percent. ‘Do it your way,’ he told me, ‘but do it the best you know how. Never consciously give a bad performance.’

“I thought of those words that first day on ‘Mother Wore Tights.’ I had never done a song-and-dance picture. When I walked on the set it seemed as if everyone’s face was saying, ‘We wanted Gene Kelly and look what walked in!’ I really had to talk myself into believing I could do it. Vash Young helped to see me through.”

The way Dan got the part is so typical of the picture business. Actually, with time out for the Army, he’s been kicking around Hollywood since 1940. M-G-M signed him when he played the juvenile lead in a local production of “I Married an Angel.” They promptly forgot he was a hoofer. Dan sneered and snarled for Leo the Lion. When he wasn’t bumping off cops, he was beating up old ladies—“just to keep in practice.”

Finally, he made a singing-dancing-acting test with Eleanor Powell.

“Eleanor and I worked ourselves into a lather,” Dan well remembers. “We created routines—couldn’t wait to get there in the morning. Then, just as everything seemed set—I was drafted! So they imported a new actor from New York named Gene Kelly. I saw the picture (‘Me and My Gal’) sitting in a GI theater in Italy!”

In May, 1946, First Lieutenant Dan Dailey was discharged from the Army. Back at M-G-M where he had a new two-year contract, they couldn’t even find a bit for him. Dan was letting off steam and water skiing at Lake Arrowhead, when Al Melnick, his agent, called him. over at Twentieth, it seemed, they were looking for a hoofer who could also sing and act. How would Dan like to be the first dancing partner of Betty Grable?

He listened patiently until Al finished.

“Now tell me,” answered Dan, not too humorously, “What is new in Gloca Mora?”

It was that five-year-old dancing test that did it. Melnick showed it at Twentieth and they loved it. But naturally they didn’t want to give such a break to another studio’s player. Dan remembered that L. B. Mayer at M-G-M had always seemed to like him. He thought of Vash Young and it gave him courage to take action. Across from Mr. Mayer, Dan sat and told his story. And because he was right, he walked out with his freedom.

“This may sound corny,” Dan reflects. “But I really mean it. I had to go through everything to fully appreciate today.”

Something special happened to Dan’s heart when he met charming Elizabeth Hofert, a former U.S.C. co-ed. He saw her first one Sunday afternoon when she was riding in a local horse show. Elizabeth was barely sixteen but Dan knew there was something solid about a girl who loved horses as much as he did. They corresponded the first two years he was in the Service. On Christmas Day in 1942, when he was home on leave they were married.

Because he lacks temperament, is kind and cooperative to everyone, the gang at the studio refer to him as “Dangerous Dan,” a token of their affection. No actor could be less of a movie menace. Because he still remembers not eating, he likes everything—with one exception. Tearoom food; “that slice of orange on a lettuce leaf sprinkled with cocoanut” still sort of haunts him. An old standby at lunch is scrambled eggs and marinated herring. (The herring habit he acquired while playing the borscht belt in the Catskills!)

Next to hoofing, Dan does an awfully good job of sleeping. “Ten minutes or two hours, it doesn’t matter. When I lie down—I sleep.” He’s a great one for postponing “little things.” Like paying the gas bill, for example. The day they brought the baby home, the nurse had to go next door to heat his bottle! It didn’t bother Elizabeth, any more than it does when Dan “slightly exaggerates.” He hangs on to everything and has a heck of a time finding anything. Unprecedented in Hollywood, is Dan’s loyalty to the same agent for twenty years!

Dan would still be wearing his same fifteen-year-old wardrobe, if his studio hadn’t subtly shouted: “You look like a bum, do something about it!” He practically worships Fred Astaire and “Bubbles, from the team of “Buck and Bubbles.”

He wouldn’t be an Irishman and Dan Dailey—if he wasn’t sentimental. That’s why last Mother’s Day he sent Mrs. Dan Dailey Sr. fourth row center seats for all the New York shows during the winter. Dan’s dad is his best press agent. Recently, while walking down Madison Avenue, whom should he meet but his old friend, Vash Young.

“By the way,” inquired Vash casually. “Whatever happened to young Dan?”

It was a great moment in the proud father s life. “Why don’t you go over to the Roxy,” he beamed. (“Mother Wore Tights” was then in its fifth week!) “And find out for yourself!”