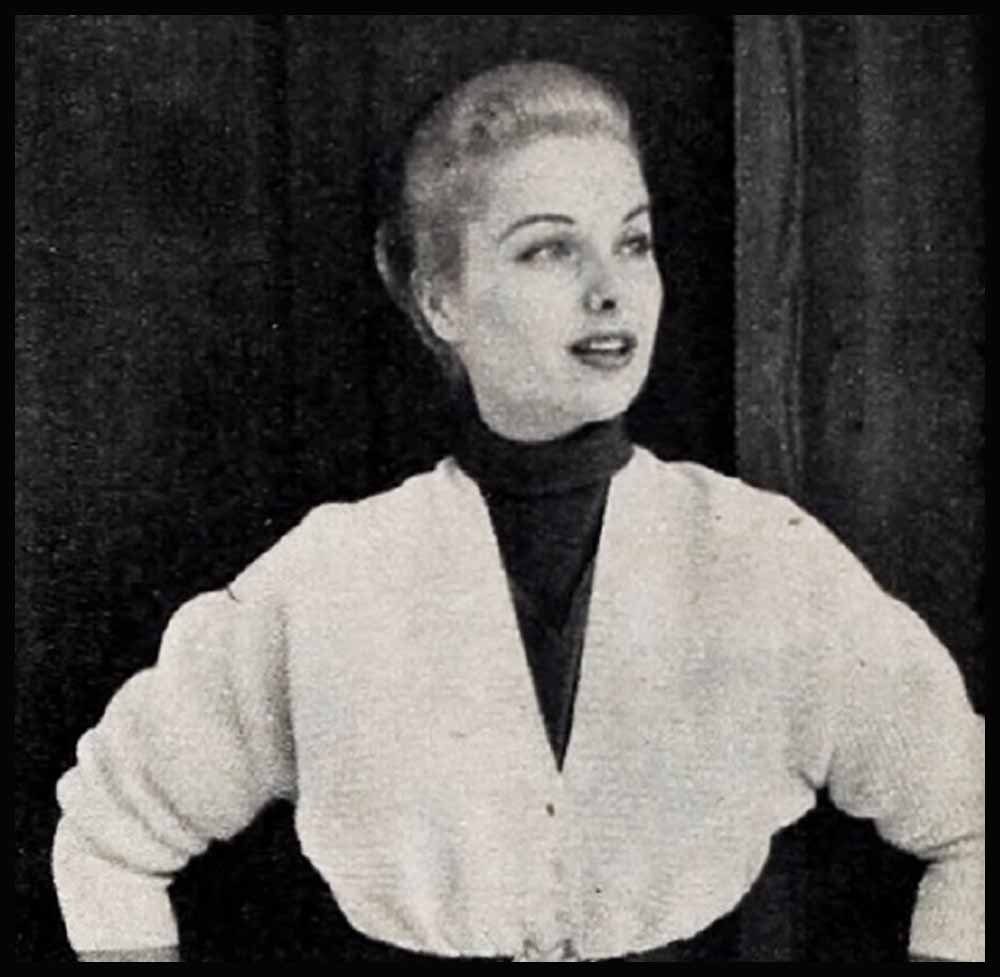 When Martha Hyer won the lead opposite Rock Hudson in “Battle Hymn” she let out a whoop of joy that could be heard the length of the Universal-International lot.

“This must mean the triangle bit is over for me at last,” she said. And actually, while Martha is one of the most beautiful girls in Hollywood, and was under contract to both Warner Bros, and Paramount before she got to U-I, she hasn’t had the breaks she deserves. Due to her flower-like face and her flawless figure, she has had a long run of playing roles as “the other woman.”

In real life, Martha couldn’t be less like “the other woman.” While she doesn’t discuss it much, she has been married and divorced. She lives alone now, in a small, exquisite house which she decorated herself. Men fall for her in droves. Right now, George Nader is her preferred date, and vice versa. However, she likes her freedom.

Probably this is because she can live just as she pleases, and is, admittedly, not domestic in the kitchen sense. Cooking is not for her, but much reading is. She is mad for all kinds of music, but prefers the classical, a taste she shares with Nader. She is also a painter of no mean talents, as well as an art collector. She has both a good eye and a thrifty knack for picking up good paintings.

Actually, Martha is thrifty in mam ways. She’s a travel hound and saves to make long jaunts possible. Whenever she can, she gets herself cast in a foreign locale film, shot on location. This way, she got herself to Africa and the Orient, both of which she adores.

As an example of her thrift, she recently bought her first car, a Thunderbird. Her salary is well up in the upper hundreds a week. but Martha has either walked or taken taxis to work until this summer. Further proof of both her thrift and smartness was shown when the vogue for Oriental clothes came in. Martha wasn’t among those who made a dash for the luxury shops.

Always very cooperative about publicity, Martha became particularly so when U-l had a premiere coming up in San Francisco. Missy Hyer volunteered her services, was eagerly accepted, and besides taking beautiful bows up there, she hied herself to the real Chinese shops in that fabulous city. There she purchased genuine Oriental robes at half the price the copies would have cost in Hollywood’s fashion emporiums. She wears them constantly at home.

Only thing is, she is seldom at home. Martha’s that unusual combination of a girl whom men pursue but whom women also want to be best friends with. Part of her appeal lies in her genuine friendliness plus her unique ability to never forget a lace or a name. Let Martha have met you once, in the back of a crowded elevator five years previously, and next time she encounters you, she not only remembers just who you are but exactly what you discussed. When you are as beautiful and intelligent as Martha, this is a sure enough way to win many friends and influence lots of people.

However, her very sensitiveness has kept her from aggressively promoting her own career. That’s why “Battle Hymn” is so important to her. She finally plays as nice a girl as she herself is. opposite Mr. Hudson, who himself is the old Rock of box-office success.