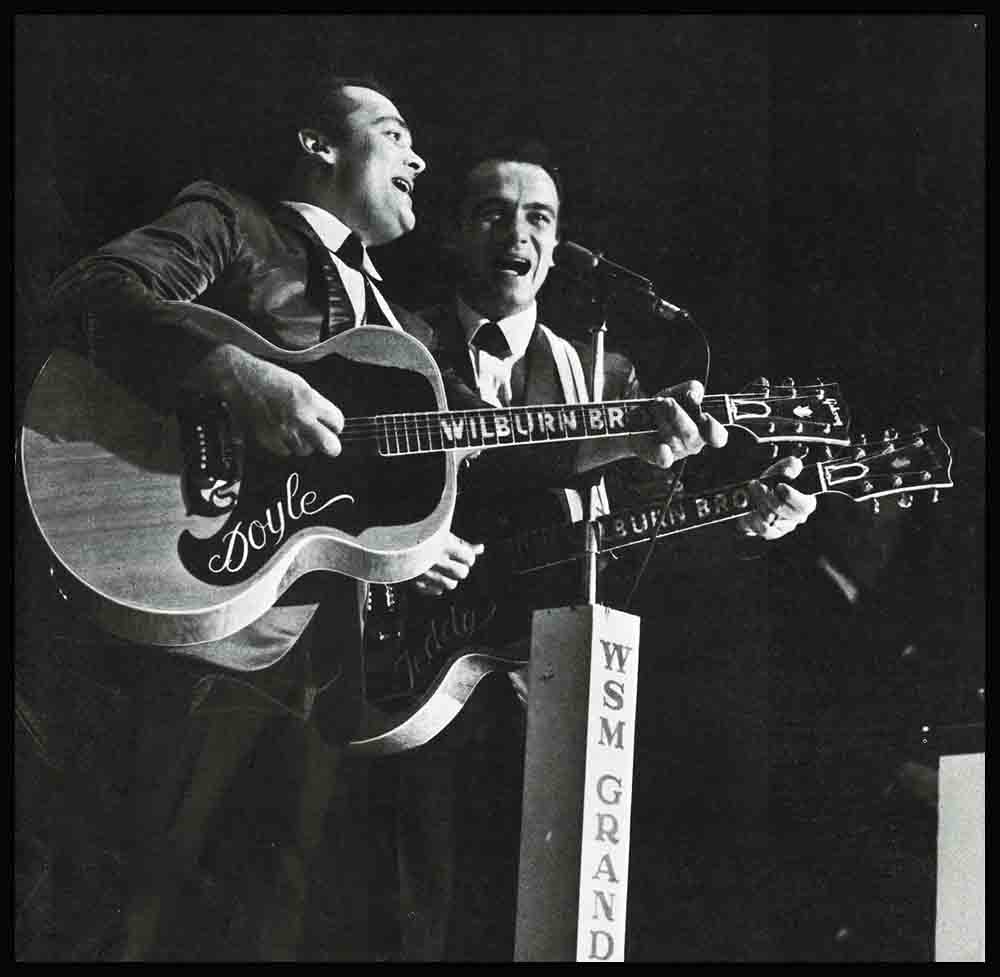 If, at a country western show, you hear the emcee announce, “Here are two great young men who record on the Decca label and have had numerous recordings in the top ten,” you can bet it will be that talented pair, Teddy and Doyle, the Wilburn Brothers!

Besides this, they have a business known as Sure-Fire Music, which includes all phases of music from rock ’n roll, popular, to good ole country music, which is the type of songs the Brothers sing.

To us on the outside of the entertainment world, success may seem to come easily to entertainers; but Teddy and Doyle Wilburn have found from practical experience that, as in any other business, it takes long, hard work. They remember depression days when they went out and sang to ease family finances at Christmas time, and today cannot sing a Christmas song without remembering the kindness of country audiences that Christmas years ago.

The Wilburn Brothers have appeared on the Grand Ole Opry and The Louisiana Hayride.

For relaxation, Teddy enjoys working out in health studios, golf, and bowling. Doyle is married to Decca recording artist, Margie Bowes, and gets his exercise playing with the apple of his eye, a young miss who answers to the name of Sharon Renae Wilburn. He likes to watch baseball on TV and go fishing.

The Wilburn Brothers are veteran troupers and have recorded such hits as “The Knoxville Girl,” “A Woman’s Intuition,” “Roll Muddy River.” Their breezy, down-to-earth personal appearances across the U.S., Canada, Australia, the Carribbean and Central America have captured the enthusiasm of millions. Their act is spontaneous, crackles with humor, and invariably touches off a rush of picture snapping, autograph-hungry fans. Folks who hear and meet the Wilburn Brothers go away with a smile on their lips, a song in their hearts, and a genuine affection for these clean-cut young men.

Billboard Magazine named them No. 1 Singing Group for the past three years, and their recording of “It’s Another World” was No. 4 on the national charts. New albums released in February are “The Wilburn Brothers TV Show” with Ernest Tubb as guest, and “I’m Gonna Tie One On Tonight.”

They will tour Germany this August, and we wish a world of luck to two great guys—the Wilburn Brothers!

It is a quote. COUNTRY MUSIC LIFE MAGAZINE MARCH 1966