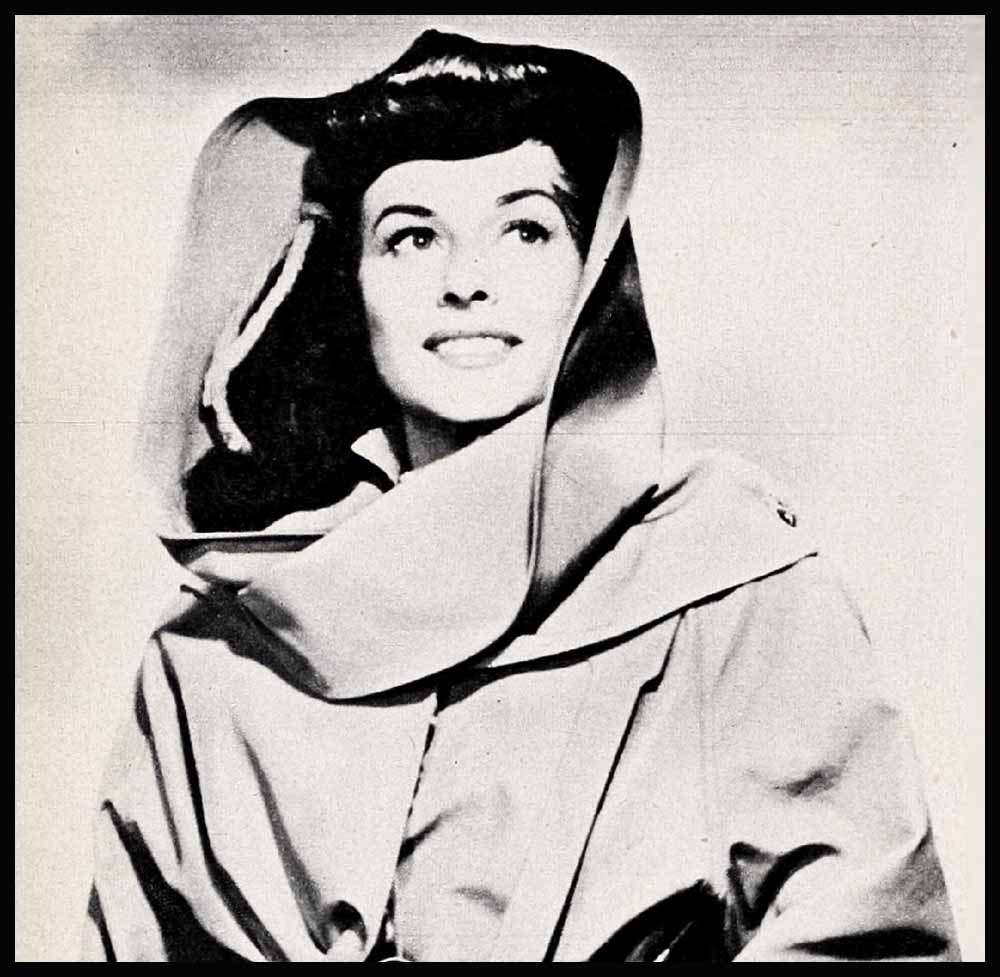 Too many pretties in the way of clothes to go any further into some of the arguments that are still raging fashion-wise in Hollywood. The “poor look” that Paris tried to foist on us hasn’t taken on here at all. There is definitely a compromise in the shoulder treatments though. Not as straight and as square as last year—but not really narrow, nor really rounded either. Nipped in waistlines, yes! Padded hips—no!

As for those heavy, overdone hats —we note that the gals can take ’em or leave ’em—and mostly they’re leaving ’em. One exception is Joan Leslie’s topper of blue fox; yet its half-angle tilt and general contour (a halo effect caught up with a pale gray and pink velvet rose toward the front) offset the burdensome look of most of the new chapeaux. Joan wore it to the swanky new L’Aiglon Restaurant with a lovely gray wool dressmaker suit that featured a longer jacket-—utterly simple lines.

The Damon Runyon Fashion Show Benefit really got a lot of the gals out, not only to view the new clothes—but to show off some of their own. Lynn Bari was there in a beige and black dress with a long hipline, and only little tucks gathered to emphasize the waist. Sleeves were black from elbow to wrist, so were the last twelve inches of skirt. The long over-blouse effect of the rest of the dress was of beige, except for a tiny black standing collar. She wore a stunning little black veiled hat, black suede gloves and shoes and bag. Gale Storm wore a nifty outfit with an idea that can really do things for any simple black, navy or brown dress you think you’re tired of. Gale used two enormous brightly-colored silk handkerchiefs to achieve a stunning effect. One was tied around her hips, the other slung around the shoulders. Her dress underneath was of plain black silk, with a big handbag of matching material. The gals went maaad for a plaid wool dinner dress (that quickly became an evening gown when its generous shawl was thrown aside) that Anita Colby was model ling at the show. And she looked more beautiful than ever in this full-skirted, tight-bodiced, strapless dress of various shades of green with black and white forming the plaid. The matching plaid shawl which can be draped or tied around one, is studded with hundreds of small shiny black beads! . . . And while on things unique— you can’t blame Paulette Goddard for grabbing that gold-colored hooded raincoat that John Frederics designed for her. She took it to England and then when she got back had her furrier line it with her leopard coat.

SONJA HENIE almost had a fit at Charlie Morrison’s lavish party for Jane Greer and her millionaire groom, Ed Lasker, in the Champagne Room, when Georgette Windsor (you’ll see her first in “Luxury Liner”) walked in with practically the same elaborate evening gown. Sonja had arrived just two days before from Paris with hers—but Georgette’s was made right in Hollywood! La Henie’s is of light yellow very heavy satin and the material gathers across the front to form a giant bustle in the back. Bottom of the skirt falls free and drags behind her just a bit. There’s lovely draping across the bust too, and it’s strapless. Sonja’s new diamond necklace (three strands with large marquise diamonds dripping from the bottom strand all across the front) left most people breathless. But not Sonja! She and Greg Bautzer were jabbering away all evening. The party was beautifully decorated—with thou sands of fresh gardenias covering most of the fixtures, forming little “trees” on the tables, and button-hole buds for the men. Each guest had ice cream in the form of a tiny bride and groom for dessert—along with some lovely gypsy music. Hollywood has gone simply mad (as have the European capitals) on the subject of string music. The best places are featuring string combinations to play sentimental music through dinner. Some have just a few pieces—others, like L’Aiglon, have a dozen or more fiddles!

Edith Head made a lovely evening gown for Gail Russell to wear in “The Night Has a Thousand Eyes.” Gail was so crazy about it she bought it for herself. A “thousand eyes” were on it one night at Mocambo because it’s of dusty pink taffeta full of silver dots about the size of a quarter. It has a corset effect but the lacing is up the back. The bodice, which gathers above this, is detachable and can be used as over-the-shoulder treatment for less formal occasions just by putting the dress on differently. The skirt swings luxuriously full to the floor from the hip-line. . . . Difficult to wear unless you have a form divine, and much more sophisticated, is the very chic dress that Hazel Brooks wore to a small dinner party one night. It’s of draped green wool jersey—and what draping! Skin-tight, yet horizontally draped from below the bust to below the hips, the draping then begins to fall in biased, then vertical folds to the floor. Neckline, also draped, falls softly off the shoulders from a low, boat-shaped decolletage. One big diamond pin and drop earrings were her only jewelry. Hazel’s hair-do is startlingly simple. She just parts her very long tresses in the middle and lets it go at that.

Doris Day who film-debuts in “Romance in High C” has a charming new basic wardrobe item in the form of a black velveteen suit. The short jacket has a high, empire style collar. It buttons snugly to the waist with brilliant buttons, and wide cuffs give the jacket an added old-world look. The skirt is mid-calf length and cut in a very full circle. She can wear it without the jacket with varied blouses and have a “new dress” each time. One favorite of hers is a heavy white crepe shirt worn with three narrow gold belts at the waist.

BETTY HUTTON, vacationing at Arrowhead, had some ideas of her own about what to do with suits. She made a man’s necktie into a nice feminine accessory. She loves the hand-painted western scenes in desert colors of mauve, gray and slate blue and she has such ties “picked up” by having the designs outlined with tiny sequins of contrasting shades. She wears them with tailored shirtwaists and skirts.

The new fashions are all toward elegance and Joan Bennett’s dinner suit of light beige wool and the beautiful white satin gown Diana Lynn wore to her own birthday party are no exceptions. Joan dined at La Rue in the jacket-dress we speak of, and the coat was long and fitted with a scalloped bottom over the two-tiered skirt. Bottom of the skirt (about twelve inches from the floor) also followed the scalloped line. The top of the dress was of nude souffle with bronze-colored sequins splashed all over the right shoulder. She wore a wide-brimmed hat of beige velvet, that had a square crown of the bronze sequins—brown suede shoes and gloves.

Bob Neal, Diana’s best beau, took her and the newly wed Jane Withers and Bill Moss to the Champagne Room for dinner on Diana’s twenty-first birthday. And he gave her a diamond bracelet for a birthday present. Next gift will be an engagement ring, we betcha. Later they all went home, jumped into evening clothes and that’s where we caught up with Diana’s gorgeous white satin evening dress—in Mocambo. Strapless, form-fitting, with just the suggestion of a corset effect (done with heavy seams down the bodice and continuing to the hip-line all around) and the stiff satin skirt so full she could hardly get through the door. Where the seams from the bodice ended, the skirt fell from deep unpressed pleats seemingly made by the seams themselves. Across the top of the low-cut bodice was a cuff of the satin. She carried a large, square, bright red satin bag; red satin open-toed sandals on her feet. . . . Reminds us to bet you that the Hollywood gals aren’t going to go for those new closed-toe shoes. In fact, the owners of several booteries here have already fold us they just can’t sell them to the glamour girls. And if you ask us, as goes Hollywood—on the screen or off—so go the style trends these days!