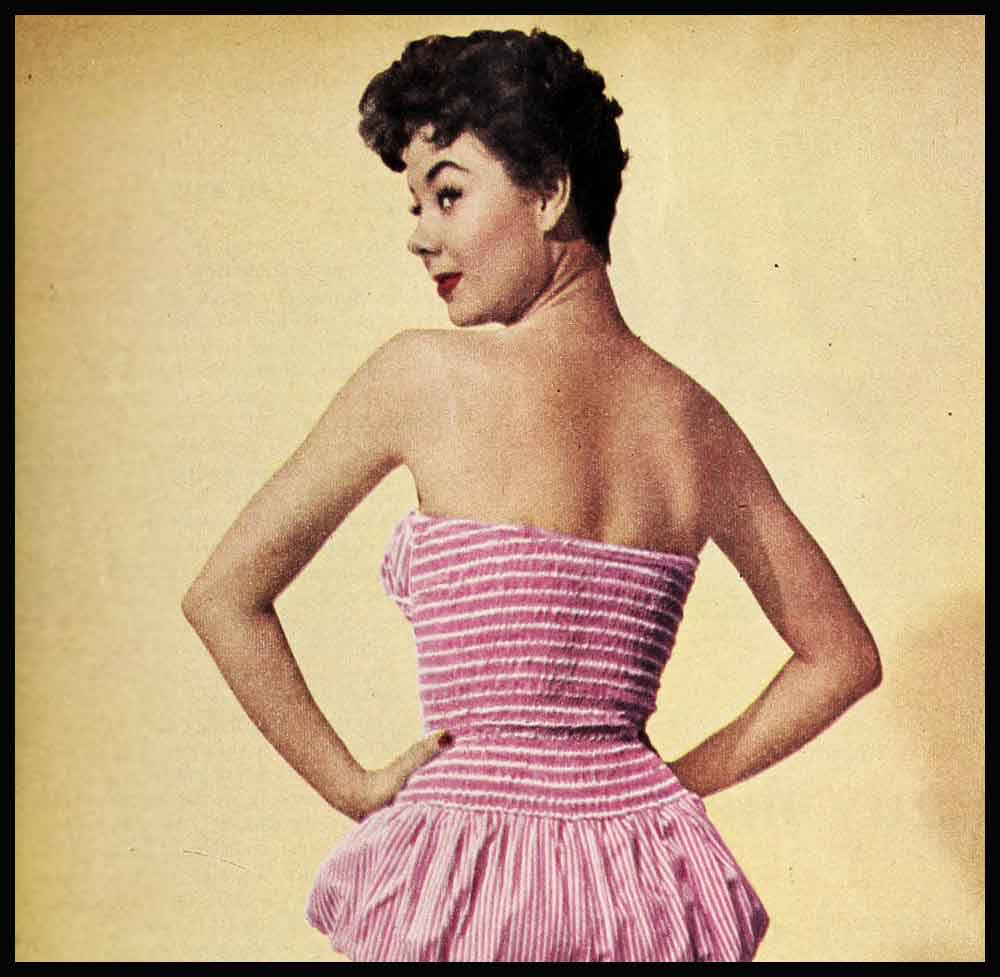 In the Swim: Back in the latish Thirties, Lucille Ball discovered Ann Miller hoofing her head off in a San Diego night spot. Today, Annie’s fabulous figure measurements are exactly the same and preview audiences applauded it throughout “Hit the Deck.” Romantically speaking, her friends still wonder if Ann will eventually become Mrs. Bill O’Connor. He’s California’s Assistant Attorney General and they’ve been dating off and on for years. . . . Until Viveca Lindfors returned to Hollywood to play Jean Hersholt’s

daughter in “Run for Cover,” no studio ever requested cheesecake art; “I’m no Marilyn Monroe,” Viveca laughingly warned Paramount, “so remember, you asked for it!” . . . But Mitzi Gaynor who has posed in many a bathing suit (for obvious reason!) is dragging the body beautiful home from dance re-rehearsals for “You’re the Top.” Bing Crosby is too weak to work from that kidney stone removal, but not too weak to come to the studio to watch Mitzi work out. “Whenever Bing walks in,” beams the new Mrs. Bean, “it’s just

like opening night and I knock myself out!” . . . Cool, calm, Oscar-winner Grace Kelly has a new and offbeat feather in her famous cap. Since seeing that community bathing pool scene in “Bridges at Toko-Ri,” a group of GI’s elected her “The girl we’d like most to dunk in a pool with!” . . . Taina Elg (pronounced Tie-nah), who hails from Helsinki and landed in Culver City, always feels fit because she dashes down to the beach for her daily dozen pirouettes. The internationally known ballerina was so charming in “The Prodigal,” Lana Turner suggested her for “Diane” (Lana’s next picture). Taina’s husband, who imports glass from Finland, plans to build an all-glass house here when they become American citizens.

Today in Hollywood: William Holden has another new and enthusiastic admirer on his long list, They met backstage when Marlon Brando won an Oscar for that great performance in “On the Waterfront.” Bill has deep interest in world conditions, especially in the Far East. So has Marlon, which is why he was fascinated with Bill’s intelligent on-the-spot reports . . . . Gene Tierney’s friends think she’s fighting off a nervous breakdown, resulting from her broken romance with Aly Khan . . . . And some say Greer Garson would be wise to forsake her career, because Buddy Fogelson is growing weary of playing second fiddle …. But Lana Turner (weighing in at 109 lbs and looking sensational) may kiss the close-ups goodbye and never miss ’em. Those three oil wells in Texas that belong to her and Lex Barker are spouting lkjuid money and lots of it!

Hollywood’s Worried About: Rock Hudson’s low spirits. Warners postponed “Giant” just long enough for U-I to insist upon their big box-office boy giving them a third consecutive picture. There are those who think Rock should have taken a suspension, but he can’t forget his studio gambled on him when he was unknown. However, the poor exhausted guy is praying his acting won’t suffer when he reports for the biggest challenge of his career.

First Aid: Beautiful and talented, Lori Nelson is. Overconfident and aggressive, she ain’t! So her role of the clubfoot girl in “Jagged Edge” was quite a challenge. Following an important dramatic scene. lovely Lori was miserable. Shelley Winters wanted to know why. “I know I could have played it so much better,” Lori said discouraged. “Then tell the director you want to try it again,” Shelley insisted. “Oh, I wouldn’t dare,” was the answer. “Oh yes you would!” exploded Shelley. So Lori was forced into it, thanks to you know who, and after the take the entire set applauded!

Funnies: A group of Hollywood stars who pay ninety cents on every dollar to the government, were lamenting the situation. “Here’s what really gripes me,” cracked Bob Hope. “Why should Rubirosa and I pay the same amusement tax!” . . . And Bob’s arch “enemy” broke up the set doing a love scene with Jeanmaire in “Anything Goes.” Inquired the ballerina: “Would they kiss like this in Akron, Ohio?” Bing Crosby deadpanned: “Honey, if you were there—they’d kiss like this is Cucamonga!”

Away We Go: Since ‘Six Bridges to Cross,” George Nader’s fan mail leaped to second place at U-I. (Rock Hudson’s first.) So a new deal is pending and, before he left for that “Away All Boats” location in the Virgin Islands, George’s bosses called him into the front office. They plan to give him zee be-eg build-up if he promises to stay single for a few years. George promised! And now wait till his fans see what happened to that handsome head of hair they go for. George wears it butch style for his new role and we can hear those squeals of protest already!

Reunions: It’s all arranged for Jeff Chandler’s wife to fly on and be waiting in New York when he returns from shooting “Away all Boats” in the Virgin Islands. To celebrate their reconciliation, Jeff’s buying Marge a new wardrobe in the big city that will top any trousseau! . . . And Jean Simmons, who finishes “Guys and Dolls” before Stewart Granger returns from making “Bhowani Junction” in India, won’t accept an immediate picture. “Even if I take a suspension,” she affirms, “I’m determined that Jimmy and I will have uninterrupted time to get acquainted again!”

Helping Hand: You’d better remember the name of Perry Lopez! Why? Well, for one reason, because Alan Ladd won’t let you forget it! The Ladds saw the Latin-looking young actor in “Battle Cry” and were so impressed with his talent, Alan got Perry into “The McConnell Story.’’ And now his next and best break comes in “Darkest Hour,” thanks to Alan again. The Ladds are going to guide Perry’s career and with such kindly, qualified sponsors, how can the lucky guy miss!

Cal Salutes: Jeff Hunter for his good taste and dignity in refusing to contest the unnecessary charges made by Barbara Rush, when she won her divorce and custody of son Christopher. Jeff did get one break, however: Barbara asked for no alimony …. Ann Blyth for volunteering to assist young TV singer Dick Stewart, who’s future for his wife and kiddie depends on that M-G-M test he’s making for “Kismet.” . . . Pier Angeli for her unswerving faith in the power of prayer. She didn’t lose Vic Damone’s baby following a fall during a rough plane flight to Palm Springs. And Pier will be well and strong again.

Real-life Santa: Like Jeff Richards and the entire “Bar Sinister” company, Cal is very touched over this untold story on beloved Edmund Gwenn. Unfortunately the kindly old character actor is suffering from recurrent arthritis, So to save him painful steps, M-G-M offered to use a double for his walking shots. “Oh, I couldn’t permit that,” he gently exclaimed, “people pay to see me and I wouldn’t want to cheat them!”

Gifties: When Debbie Reynolds (chaperoned by her mother) accompanied Eddie Fisher to London’s Palladium, Eddie gave her a bon voyage present she needed and loved. Lipstick red luggage that matches the Thunderbird the boy friend gave Deb, too …. And speaking of Thunderbirds, the gear knob on Bob Wagner’s is imbedded with a gold St. Christopher, patron saint of travel. Bob “forgets the name ol the lovely lady who presented it! . . . And Janet Leigh was the first customer to buy Tony Curtis one of those new orange sport shirts from his favorite “Gifts for Men.’

Acid Test: By the time they finished “Battle Cry,” Tab Hunter and Aldo Ray were real buddy-buddies. So when Columbia sent Aldo to Japan 😮 make “Sergeant O’Reilly,” good ol’ Taberoo called Jeff Donnell who’s so madly in love with her husband, she was pining away with loneliness. “I’d like to take you out for the evening,” said thoughtful Tab. “Please tell me where you would like to go Mrs. Aldo Ray immediately answered: “To see any movie—as long as it’s ‘Battle Cry!’ Grins Tab with a sly wink: “So I was forced to look at myself again, too which, under the circumstances, wasn’t so difficult!”