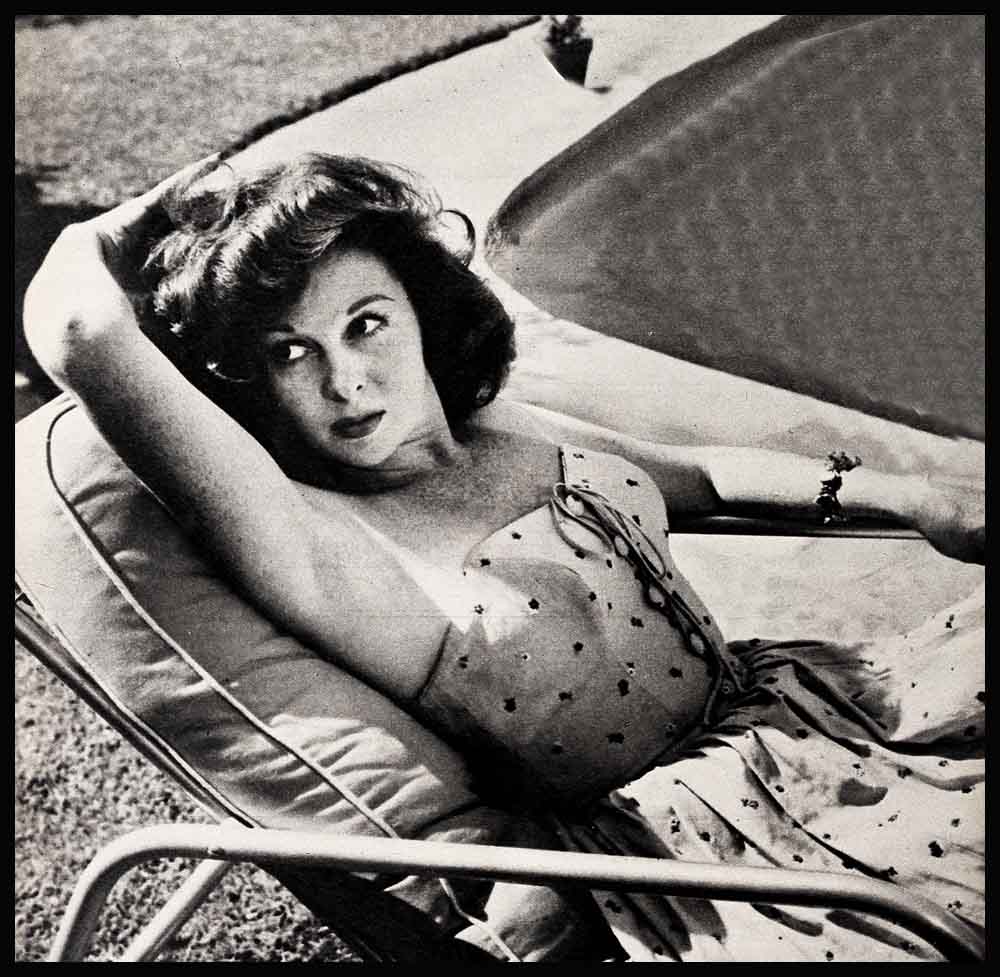 This Is Susan Hayward

“I had been to market one day recently,” said Susan, “and when I came home with my car full of heavily loaded paper bags, cartons and the six-year-old twins, Timothy and Gregory, I overheard my agent in the next room talking to my studio.

“ ‘But I must insist on this,’ he was saying, ‘It is imperative for a star of Miss Hayward’s importance.’ At that I laughed long and loud. I didn’t have any idea of what he was insisting on then, and I still don’t because, you see, he knows his job and I don’t bother him with silly questions. But the tone he used when he said, ‘a star of Miss Hayward’s importance’—this was my private little laugh and no wonder.

“You see, it wasn’t too long ago when, for the first time in my life, I had a brand new dress to wear and I wouldn’t have had that except that it was given me by Louella Parsons, no less, because we were going out on a personal appearance tour and she wanted me to look nice. Back in those days, judging by outward appearance, I was in clover.

“I had a contract with Paramount and before that I did a little modeling. Nobody in Hollywood knew that I had been living on beans—wonderful, lovely, cheap, filling beans—to stretch my tiny salary over my big ideas. Come to think of it, even the beans were a vast improvement over my former diet of shredded wheat and milk which I stretched out over my low-income period between being dropped by Warners and signed by Paramount. And that,” said Susan, “is the story of my life.”

The string quartet will now play “Hearts and Flowers.”

But the truth about Susan is that she’s not the tempestuous, flamboyant woman you see on the screen. She is a working wife and the happy-minded mother of two boys.

The Barkers’ house is a simple two-story affair on a simple unfashionable Street in the San Fernando Valley and they have two medium-priced cars in their garage. And on the small lawn in front of their house you usually see the boys’ bikes sprawling. It is true that they do have a swimming pool in the back yard, jut it is mostly to keep the kids happy. The neighbors across the street who have nothing to do with the movie business have a pool in their back yard for the same reason.

That’s not much like the rich wife in ‘Smash-up” who drank too much, is it? Or like the wildly romantic girl of “My Foolish Heart” who loved so completely she had an illegitimate baby. And, if you haven’t seen her newest picture, “I Can Get It for You Wholesale,” I will tell you right now that she’s not like its ambitious hardboiled heroine either.

Susan loves being a star and she loves the Creative excitement that goes with stardom. She has fought and worked constantly to get to the top and she prays every night that she can continue to be a top-ranking personality for a long time to come. “As a matter of fact, my knees are wearing out.”

Susan doesn’t take her characters home with her. Every twice in a while, Mrs. Barker’s temper blows and when that happens all the dishes rattle out of the cupboards and all the bystanders run for the hills. But really, it is over much more quickly than you would imagine. Her one big problem is trying to discipline her emotions and her temper. She tries to be truthful, even as you and I. She will tell a polite lie, for instance, saying her best friend’s hat is pretty when she doesn’t actually think much of it. She comforts herself when such situations arise with the knowledge that everyone thinks his or her taste is good and it doesn’t necessarily have to agree with Susan’s. But in all matters of real importance, she tells the whole truth and tries to face it too.

She grew up in Brooklyn and was named Edythe Marrener. Her father always said she took after his mother, Katie Harrigan, who was on the stage in Ireland. That helped shape her character. From the very first mention of Katie Harrigan she knew what her ambition was and when Grandma came over from the old country and shared the Brooklyn flat, she adored her.

Grandma used to give premieres in the front room—whole plays sometimes and Susan was the little mimic who memorized whole portions of them. When Warners first signed her—it broke her heart because they wouldn’t let her call herself Katie Harrigan. They said it sounded like a burlesque queen, but to Susan it rang out with the laughter and love that her grandmother stood for and that her mother and father stood tor too.

Her parents’ happy marriage had a great deal to do with making Jess and Susan’s marriage a steady and productive one. They both come from happy families. When they were married, all Hollywood said it couldn’t last, but they knew better.

Maybe it’s because Susan was brought up on the installment plan that she can’t go one cent into debt for anything now. Back in Brooklyn, the Marreners would have an icebox—a nice, new shiny icebox—for a few months, and then someone would come and take it away; or they would have a beautiful stove until those men were there again and they would have to go down to the comer and buy a secondhand one for three bucks. It could be that Susan cares nothing about society as society is today because, growing up, she was left out of all the usual kid activities. She ducked because she either didn’t have the clothes to go to them, or the kids knew she could never return their favors, or both. She watched other kids having birthday parties. She never had one. Even her Christmas presents were usually hand-me-downs from more fortunate cousins, but the stuff was always wrong. You see, her nearest cousin was three sizes ahead of her, so the things were always too big or too far advanced.

The result of all this is that at Christmas now she goes mad gift-buying. She has a business manager who tells her what to do all year and she listens and almost always follows his financial advice. But at Christmas she forgets it like crazy She buys everyone too much and gets gifts for everyone she can think of—even if they are virtually strangers. She trims her Christmas tree—and none of those modern white and pink ones either—but a huge old-fashioned green tree tied all over with red and white bows and ornaments and lights. She helps Santa load the boys’ stockings and Jess’s socks with all sorts of giddy things. Jess loves the excitement, too, because he never had it either when he was growing up.

Anybody who loves to act has an overactive imagination that makes him or her take everything big. Personally, I think Susan would adore being the whole cheese in anything. Her ideal film would be one in which she would work every day from nine till six and be in every shot. When Twentieth Century-Fox first cast her in “David and Bathsheba” she told them she would like it much better if it were ‘Bathsheba and David.”

Originally, she had the same sort of idea about marriage, but she soon found out that if you are going to be a man’s wife, he is going to be the boss or, despite all your charms and what not, you are going to be a very unhappy character. When Jess says, “Now listen, Ma,” she listens: She is glad that she is a professional working woman for that does teach you the necessity for give and take which makes a marriage too.

Seven years after their wedding date, the Barkers may not have their living room furnished. But they have peace of mind, perfect health and a future reasonably enough secure so that they could both quit working tomorrow and not have to worry too much. Add that to their having the boys and not a debt in the world and you know they are fortunate people. Incidentally, the money they would have put into that living room furniture is going to take the family to Ireland this summer.

Susan is very grateful for her good luck. She takes time off screen to look up and around at God’s beautiful world and appreciate it. I know people who are so ambitious they don’t take that time. We all should do this. I know it’s given Susan strength she couldn’t have had otherwise.

When the boys ask, “What will we be when we grow up?” she tells them they can be anything they like, so long as they are healthy and happy and honest, and I for one know they will be. Perhaps the Barker boys can sell that idea to every other kid on the globe—and if they do, the world will become a happier place to live in.