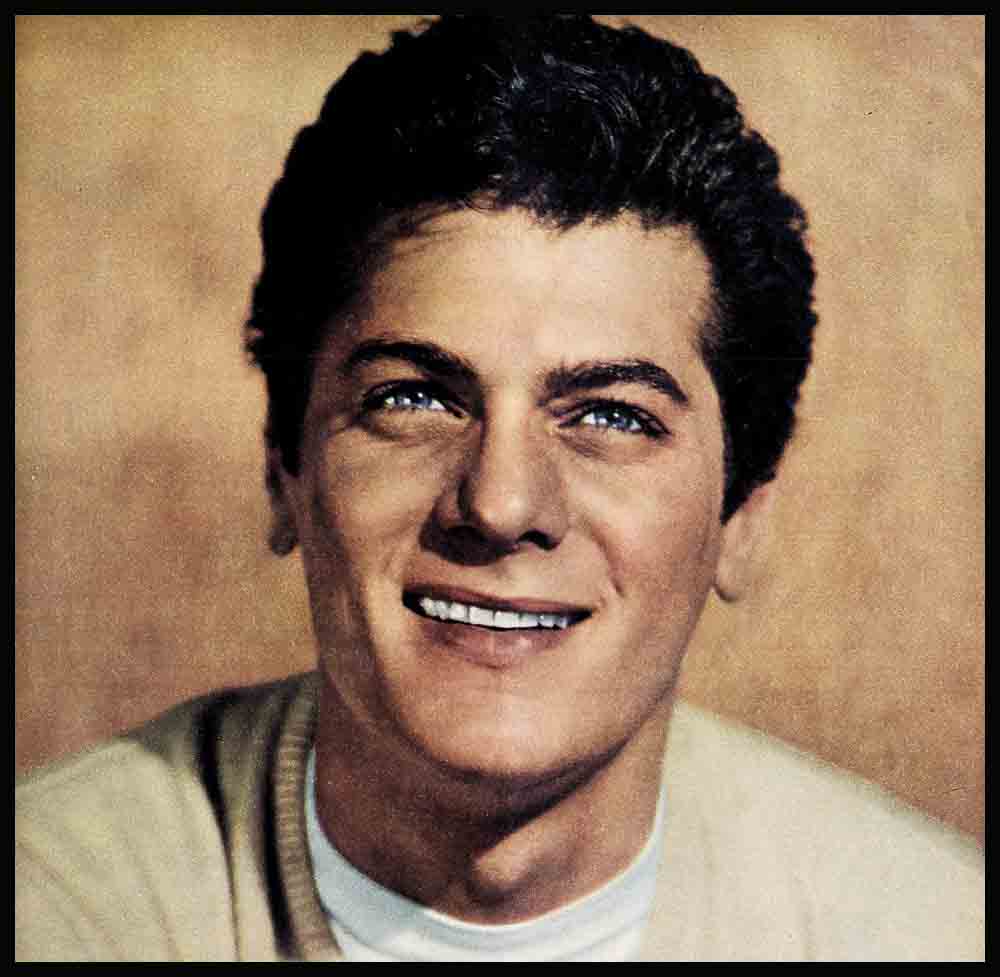 He doesn’t like popcorn. He has a mania for shoes, now owns twelve pairs of all kinds, and hopes someday to own twenty pairs—“with trees and a special place for them in the wardrobe.”

He is deeply introspective, has few illusions, and doesn’t like to shave. ‘I’m always afraid of cutting my throat.” He prefers cats to dogs and if he had the room he’d like to have five of them. “You never get too attached to a cat. It doesn’t hurt so much when you have to give ’em up.”

His legal name is Bernard Schwartz. He plays chess “not well,” and thinks he would have made a very bad businessman. He takes no vitamins, dislikes hill-billy entertainment, and his monetary plans include “a house for my folks, send my kid brother to college, have all the clothes I need, a car and an occasional trip to New York. I have no desire to get rich.”

His hair is black, thick and curly, and he’s very fussy about the way it is cut. He is fond of garlic and onions.

He is an excellent boxer. He smokes less than a package of cigarettes a day, has no television set, and with profound sentimentality he thinks of New York’s Central Park as the most beautiful place he has ever seen. “It meant so much to me in my boyhood.”

He owns but one hat—a pork pie.

Had he not become an actor he would have liked to have been a painter. He was born on June 3rd, 1925.

He is a sound sleeper, likes to sleep at least ten hours, and thinks the greatest asset in a wife is “that security that prevents her from being influenced or affected by what the Joneses have.”

He loathes having a manicure, and made his first professional appearance for ten dollars a week in the Catskills; he played the lead in “The Jazz Singer” and was twenty years old.

He has an aversion to short, “droopy” socks, wears garters, is inclined to be quick-tempered, and owns about two hundred records—mostly “bop” and “jump.”

His eyes are blue and he has a good memory for faces and phone numbers, but has difficulty remembering names and never remembers the license number of his car.

He is righthanded and currently finds himself unconsciously breaking into song, usually “If I Were a Bell” from the Broadway show, “Guys and Dolls.” He has a true, though untrained, baritone voice.

Tony Curtis’s favorite stories are of Jack and the Beanstalk and David and Goliath “stories of little guys up against big guys”—this being the keynote of a rugged boyhood which tempers his deeply sympathetic outlook on life.

He never eats oysters and his favorite comic strips are Prince Valiant and The Katzenjammer Kids.

He drinks no hard liquors.

He wears no rings, dislikes opera, and thinks it “silly” to make any distinction between blondes and brunettes.

He is not affected by heights, has no collecting hobby, and there was a period in his life when he wanted to be a doctor. He likes tea, with lemon and sugar.

He used to wear arches in his shoes because of flat feet but has now cured himself of this pedal defect. His idea of loafing is to go to the beach and read or paint.

His mother and father are constantly admonishing him about his “irresponsibility”—“never getting things done and the way I handle money.”

He is one of three children and himself would like someday to have three boys. He hates hand-painted neckties.

He confesses that he “is terrible in English and spelling,” He is inordinately fond of Hungarian cookies stuffed with jelly and cinnamon, made by his mother.

He likes to paint still lifes and landscapes, studied at New York’s Beaux Arts Institute and his mother is the proud possessor of a canvas entitled “Portrait of a Toothache” which he painted at the age of fourteen after an experience at the dentist s. He recalls that when he showed it to his mother, she remarked: “So beautiful. What is it?”

He excelled in school track contests, and as a little boy his chief recreation w as playing cops and robbers. He is inclined to forget anything in which he is not deeply interested.

He yearns someday to visit Italy.

His memorizing of dialogue does not come easily. He has a camera but finds photography uninspiring.

His horsemanship is second-rate and he has no intention of improving it because he wants to discourage the studio from putting him in Westerns. He gave up smoking a pipe because “it was too much trouble.”

He cherishes a single cuff-link made ot a simple metal which was owned by his father when he was an actor in Budapest, planning someday to have it matched. “It has brought me luck.”

He finds polo a bore, wrestling unendurable and machinery completely baffling. His mother calls him Bern-a-la and he drinks only one cup of coffee a day.

He plans to learn golf, has just started tennis and he would give a lot to own a Picasso painting. He gets seasick at the first lurch of a boat.

He used to be constantly biting his cuticles but has broken the habit.

He doesn’t like corsages or flowers worn on the person; his girl friends are always presented with a tiny bouquet to carry.

He calls his parents by their first names, carries no fountain pen and loves to play poker.

He can speak Hungarian. He was named after an uncle, owns a bunch of lighters but carries none, and is a rabid movie fan for period and adventure films.

He has a passion for shirts, now has forty-three of all kinds, mostly with tab collars and French cuffs. His personal idol was F.D.R. and he never seems to have time enough to get things done.

Tony Curtis remembers a big bully at school who was perpetually beating him up. Hatred for this boy smoldered inside him until the day he was discharged from the Navy. He went to the old neighborhood, sat on the steps of the boy’s house and waited for him. Five hours later the bully, now grown to manhood, showed up. Tony struck him one blow and knocked him down. He lay there, startled and bleeding at the mouth. Tony stared at him a moment. Then, without a word, he turned and walked away. “It was as if all the hatred had rushed through my body and out of my arm. I never thought bitterly about him again.”

He is an excellent swimmer, prefers a pool to surf, weighs 155 pounds and, while he was loading a torpedo at Guam, the loading chain broke, hit him in the spine and paralyzed his legs. He thought he would never walk again but after seven weeks in a hospital he was okay, though evidences of the injury still remain.

He cannot ski or ice skate and his latest picture is “The Prince Who Was a Thief.”

He always wears a sailor hat at the beach, likes sweet wines—chianti or a tokay type made by his parents.

His favorite singers are Dean Martin, Perry Como, Frank Sinatra and Tony Martin. He constantly experiences stage fright on the first day of shooting a picture. His reading taste tends towards the biographical in the arts. his current interest being Toulouse-Lautrec’s biography, “Moulin Rouge,” which again is symptomatic of his preoccupation with “little men beset by ar overwhelming world.”

He is always riding hunches.

He has no desire to wear a mustache but occasionally, when not working for a few days, grows a goatee, shaving it when people begin to get curious.

He studied under the G.I. Bill at the Dramatic School of the New School of Social Research. He has a fierce hatred for people who push others around.

Tony Curtis is for marriage: “Soon as my parents are comfortably settled and my responsibilities are taken care of . . . oh, maybe in about five years.”