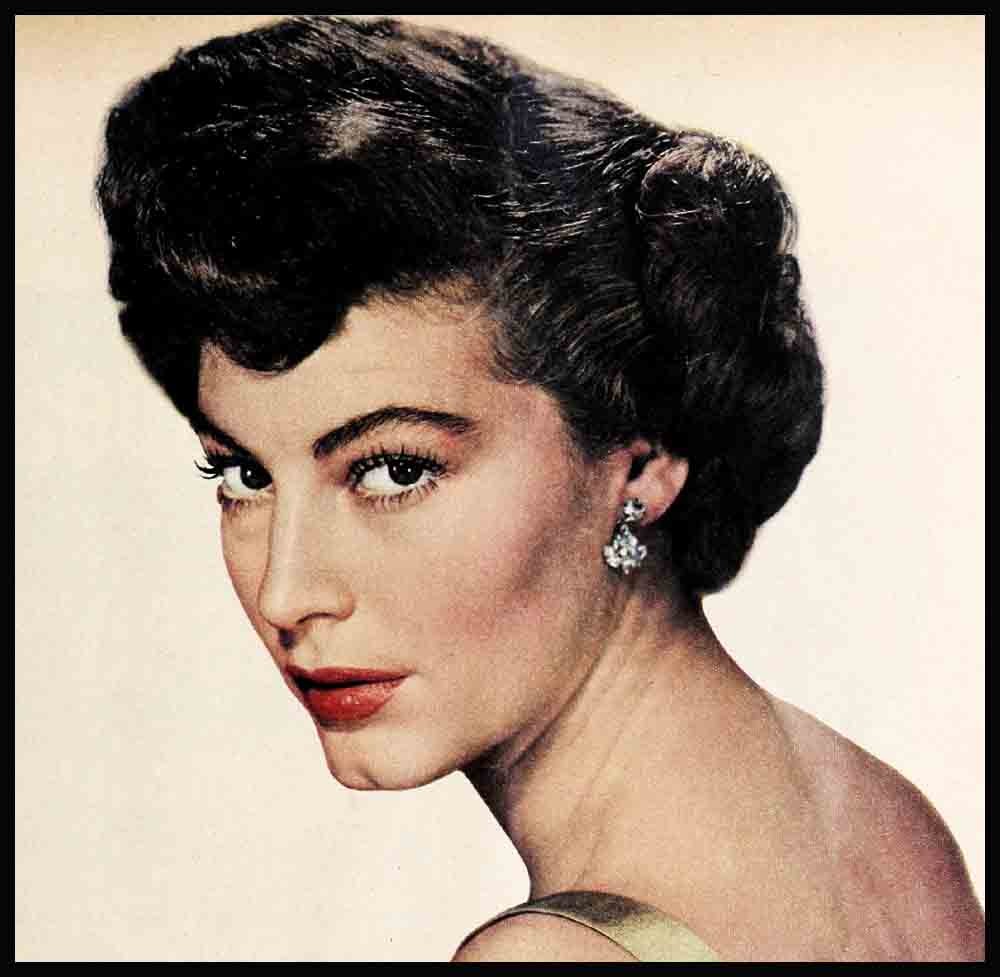 The Truth About Ava Gardner

What will be the outcome of the Ava Gardner- Frank Sinatra romance?” That’s Hollywood’s favorite question. Will this romance end as suddenly and dramatically as it began? Or will it continue to entangle Ava and Frank in such gossip as already has been injurious to their careers?

Ava never has truly understood the significance of her position as a celebrity. Always she has protested that she would prefer to live a secluded personal life with no need to justify her behavior to anyone. In fact, it’s only in the last few months that she has come to realize that she’s now far too important in Hollywood’s scheme of things to expect any such privacy.

There’s no mystery about Ava’s attraction for Frank or his attraction for her. When Frank wants to he can be tender, thoughtful and generous—all the things that Ava wants above all. So naturally she responded to him when they met at Palm Springs, a short time after he and Nancy had separated. And Ava’s response, incidentally, is never likely to be halfhearted.

It’s in her nature to cry at sad songs and movies and she is capable of appreciating, without necessarily understanding, the beauty in a line of verse. She has the kind of emotional sincerity that can be a hazard to a woman. And the fact that Frank was willing to jeopardize his career to be with her promptly increased her regard for him.

For Frank the situation is as resolved as it can be He’s still legally married to Nancy even though their break seems permanent. Nancy has had her settlement; one-third of Frank’s income to support herself and the three children and a property settlement which includes the Holmby Hills house and its furnishings. Frank did not contest her suit. He remained silent in New York where he will stay through the winter, occupied with radio and television programs, until he makes a picture in Europe. He is, in fact, now furnishing the six-room apartment he has leased on Park Avenue. In every sense he gives the impression of a man attempting to close the door on one chapter of his life and direct all his energies into a new channel.

But what about Ava? Always her emotions seem to lead her into trouble? Will this love, as some of the flintier tongues are saying, cause a lapse in her popularity? For a time it was thought this romance might even cost her the most glamorous role of her career, the plum role of Julie, the bewitching heroine of “Showboat.” But her test in Technicolor was so excitingly beautiful that Metro was not long in deciding that she—and no one else—was the girl for this part.

All the world loves a pair of lovers—until they are involved as two sides in a triangle that affects children and causes a broken home. And the open manner in which Frank and Ava chose to demonstrate their affection in Hollywood. Spain, Paris, New York and London certainly cost them sympathy.

However, contrary to the many scolding suspicions which have been printed by movie columnists, Ava was not responsible for the break-up of the Sinatra marriage. The domestic difficulties of Frank and Nancy had been going on for years and their decision to separate was an open secret long before Ava ever accepted Frank’s attentions.

In fact during all of the years that Ava has been in Hollywood she has made an ironclad rule against romantic entanglements with married men. Frank became the first exception to this rule when he made it plain to her that he and Nancy were through.

So far, except for the times when Ava has been with Frank, it would not seem that this romance has brought her happiness. She and her sister, Beatrice, who lived with her and traveled with her in Europe, have quarreled repeatedly. And, in the last year, Ava, who never had very many close friends, has drawn her circle even closer.

During her last sojourn in Hollywood she lived, following the sale of her house in Nicholas Canyon, at Malibu with the Rosenthals, her attorney and his wife. And she went nowhere, except when she dressed up for a party honoring Dore Schary, Metro’s production chief. And this, in a sense, of course, was a command performance.

Those who know Ava best insist she hasn’t been really happy for a long, long time.

Eight years ago, married to Mickey Rooney, she became insecure because she was expected at all times to be a glamorous clothes horse. And certainly her marriage to Artie Shaw did not help. She developed such an inferiority complex when Artie, overnight, tried to convert her into a wit and a sophisticate by handing her weighty books to read that she subsequently found it necessary to seek the help of a psychiatrist.

Artie, it is rumored, convinced Ava she never would be happy until she found another man just like him. And Howard Duff wasn’t such a man. Howard loved Ava enough to put up with her moods and her didoes. He even loved her enough to let her know he was completely overboard about her. But Ava never felt that way about Howard.

Actually Ava’s beauty—even greater than it appears on the screen—has been as much of a handicap as it has been an asset. Were she less striking in face and figure she might very well not be the mixed-up girl she gives every appearance of being.

Which brings us right back to her romance with Frank. He finds her attractive, undoubtedly. You have only to see them together to know this. But he comes to her with a great need for companionship. And since it’s most unlikely that he ever will allow her to get the upper hand, he may well hold her interest. After all, Frank made his impact on American womanhood because he sang a song as though he were singing it to each woman individually. Ava can understand that kind of music.

Since Ava returned to Hollywood the word has been circulated that her romance with Frank is a thing of the past, I that when they met in New York City—dined at the 21 Club, danced at the Copacabana and went together to ball games and fights—they decided that it would be best to curb their emotions until Frank’s marital status offered some hope for their future. The chances of his being free to remarry, however, are almost zero. Nancy, a devout Catholic, is unlikely ever to consent to a divorce.

Most of this winter, at least while Ava is working in “Showboat,” they will have a continent separating them and lending objectivity to their thoughts of one another. Perhaps with the coming of spring each of them will have an entirely different outlook on the romance which intrigued the nation.

In the meantime Ava will not talk about Frank to the press. Thus far she has been most reluctant to talk even to her closest friends. One columnist who managed to corner her at a small party got the tortured answer, “I can’t say I’m in love with Frank when he’s not divorced. He’s a great person, but . . . oh, what’s the use?”

It’s likely in her relationship with Frank that Ava Gardner, were she not a famous woman, might find a deep and satisfying security.

But unfortunately the spotlight will continue to focus on them—until she makes the decision that turns it off. And this will be a choice that will influence her entire future—both as a woman and as one of the brightest new personalities of the screen.