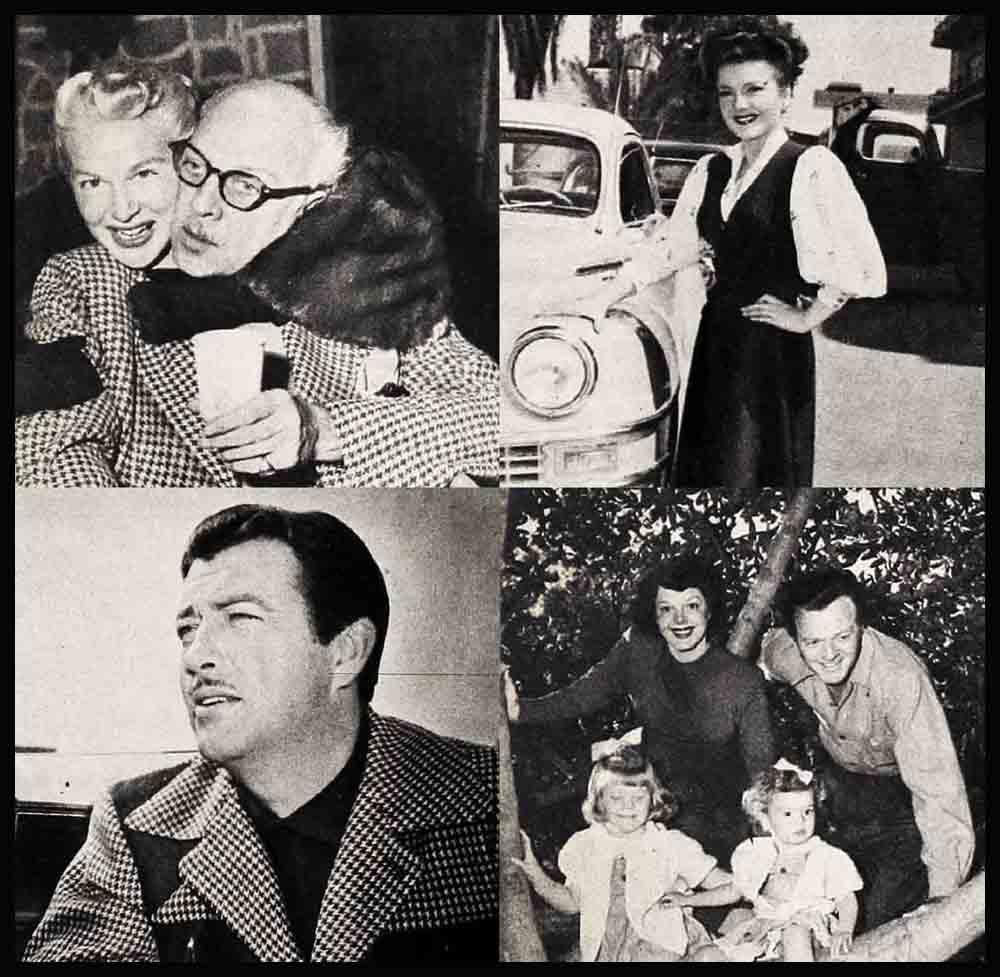 Once Upon A New Year’s

Twelve bells and all is well. Or is it?

Come New Year’s and motion picture stars, together with the rest of the world, renew their acquaintance with resolutions made in the past. Some auld. Some aulder.

Esther Williams and Ben Gage remember a New Year’s Eve in Mexico where they were equally homesick. Esther was on location there making “Fiesta,” and Ben had flown down to spend the holidays with her. They attended a dance in the hotel and tried to be very gay. But they wanted to celebrate their first “married” New Year’s among familiar faces back home. Twelve o’clock, and nothing happened. This was too much. But one minute past midnight and, as per Mexican custom, the orchestra struck up “Diana,” the traditional Mexican song played for the toreadors at bull fights and on all momentous occasions. Then, in tribute to Esther and Ben, the orchestra went into the strains of “Auld Lang Syne.” The Mexican people picked it up, some singing in English, some in Spanish, and some just smiling and clapping their hands. Looking at their faces, Esther realized the spirit and sentiment of New Year’s is the same in any language. And she resolved then and there to contribute to this feeling of universal brotherhood as much as she could. With every group. Every minority. And now there are the paraplegics at GI hospital pools where she judges contests. There are the handicapped blind children she teaches to swim.

Another New Year’s. … A young couple stood at 42nd Street and Broadway watching the old year out. Very much in love, they were a little fearful of what the new year might bring. John and Marie Lund had been married only a little over a year. John was playing in “Early to Bed” on Broadway, with a run-of-the-play contract. Marie had a contract for RKO pictures in Hollywood. She had been asked to report January 1. But she had received an extension so she might spend New Year’s Eve in New York with John. Now they stood on Times Square at the crossroads of two careers. “Maybe your show will close and you can come on out to the coast and . . .” Marie would begin hopefully. “But I’m not for pictures. Nobody would come to see me,” said John. Oh yes, they would, thought Marie. I will. I’ll come see you soon, no matter what happens in Hollywood. No two careers, she resolved, would ever separate them again. When her option lapsed, Marie made no effort for another affiliation. She headed happily for New York and a lifetime job as a wife.

Last year, Bob Taylor, in London for “Conspirator,” had gone to a party given by a studio executive. It was a wonderful party. But Bob discovered you can be terribly lonely in a crowd. The wonderful girl he longed to be with—where was she, what was she doing? At a quarter to twelve he left the party, and walked all alone in Piccadilly Square, thinking of Barbara. There, alone, as Big Ben began tolling twelve, he was somehow less lonely.

“Auld Lang Syne” for Betty Hutton is a happy time because of a resolution she made to make friends. Betty, inherently a little shy, made this resolve when she first arrived on the Paramount lot. She knew only the cast and crew on her picture and Buddy DeSylva, who had hired her. Playing only the second lead in “The Fleet’s In,” she was timid with the big stars on the studio lot. So, in her first Hollywood home, some one hundred steps up a hill, she found herself about to usher in New Year’s alone. With her love for laughter and people, she was very miserable. It was then she decided to give her own get-acquainted party. And before she could change her mind, she picked up the phone and went into action, fast. Getting phone numbers from Buddy De Sylva, she invited all of Paramount’s top directors and stars. To her amazement, as so often happens in Hollywood, none of them had anything special planned. Nobody but director Mitch Leisen. He also was giving a party, but he said he would drop in with his gang later on. Still dazed by the whole thing, Betty kept telling herself, “Nobody will show.” But they did. All eighty of them. As they kept winding their way up her hundred steps Betty, caught with only one turkey and one ham in the house, rushed in search of her stepfather with a panicky, “Quick! Get some food, anything!” He left by the back door and practically bought out the Gotham Restaurant on Hollywood Boulevard. Growing more excited by the minute, Betty saw a famous and colorful holiday ensemble coming through the door. “Not Bing” she said. But it was Bing, and soon he was Auld Lang Syne-ing, with all of her other star guests joining in the singing. Betty resolved, then and there, always to meet friendship more than halfway, to forget her shyness, if possible, and let hers be the first smile, the first “hello.”

A ticket to adventure, that was Van Heflin’s goal, that New Year’s Eve he was aboard a freighter bound for Liverpool. After being disappointed in his first love the theater, Van had joined the Merchant Marine and had served as petty officer for two years, two years this night, this terrible night of the worst storm he had ever been in at sea. The worst any of the old salts aboard ship ever remembered. The ship tossed like a pebble. All hands worked as best they could battling the elements. And before Van’s horrified gaze, two of his buddies were washed overboard. When the ship reached Liverpool, his career as a seaman was ending. He had seen two of his shipmates’ futures swallowed up in a matter of seconds by an angry sea. He resolved to live life to its fullest and happiest. Doing the work he loved most. Acting. When he got back to the States, he returned to the theater that received him, this time, with open arms.

Out of last year’s New Year’s party came Anne Baxter’s resolution, as old as Eve, woman’s pride in her appearance. Also at the party was a friend who hadn’t seen Anne since she lost so much weight and regained her sylphlike slimness. “Why hello, Anne,” she said admiringly, “where’s the rest of you?” Anne resolved then, that this year her friends, if they feel so inspired, can say the same thing. And remembering her wonderful reaction that time has helped her to refuse ice cream, Hollandaise sauce, and all the other want-ables. Her resolution has paid off both in a figure and in figures, for she has been richly rewarded by such top roles as that in “You’re My Everything,” and “A Ticket to Tomahawk.”

On another New Year’s Eve, Bob Hope, in a plane over the Atlantic, was tired in mind and body, but high of heart. He’d gone overseas to spend Christmas with the GI’s, to help give an uplift in spirit to the men of the air lift. It was the nation’s most important project, these men’s missions, furnishing two and a half million Germans with food and fuel. At Tempelhof Airfield in Berlin, Hope had watched weary, red-eyed pilots make blind landings and take-offs. He had just put on a show in a hangar for the boys of the maintenance base at Burtonwood, a field enclosed by England’s dreary, freezing fog. After the show, he’d made the rounds of the barracks with Air Secretary Symington and had seen his anger at the quarters of the GI’s. Symington had phoned Washington immediately. There would be new linoleum, he told the boys. More stoves. More heat for the mess halls. More lights, too. “Any other complaints, boys? You, Private, have you got any? You, Bill, any complaints?”

Bob Hope landed in Hollywood last New Year’s Eve morning, a tired but happy man. And he had no complaints. In this atomic age, in the midst of the world’s most tedious, most hazardous operation, Uncle Sam still took time out for every citizen in his family.

Hope resolved, no matter how busy he “imagined” himself to be, with motion pictures, radio shows, personal appearances, or whatever, he would always take time out for whatever he could do. For wherever it was needed, he’d take time for a word, a handshake, a laugh.

A resolution Bob Hope has kept, and long before it was made.