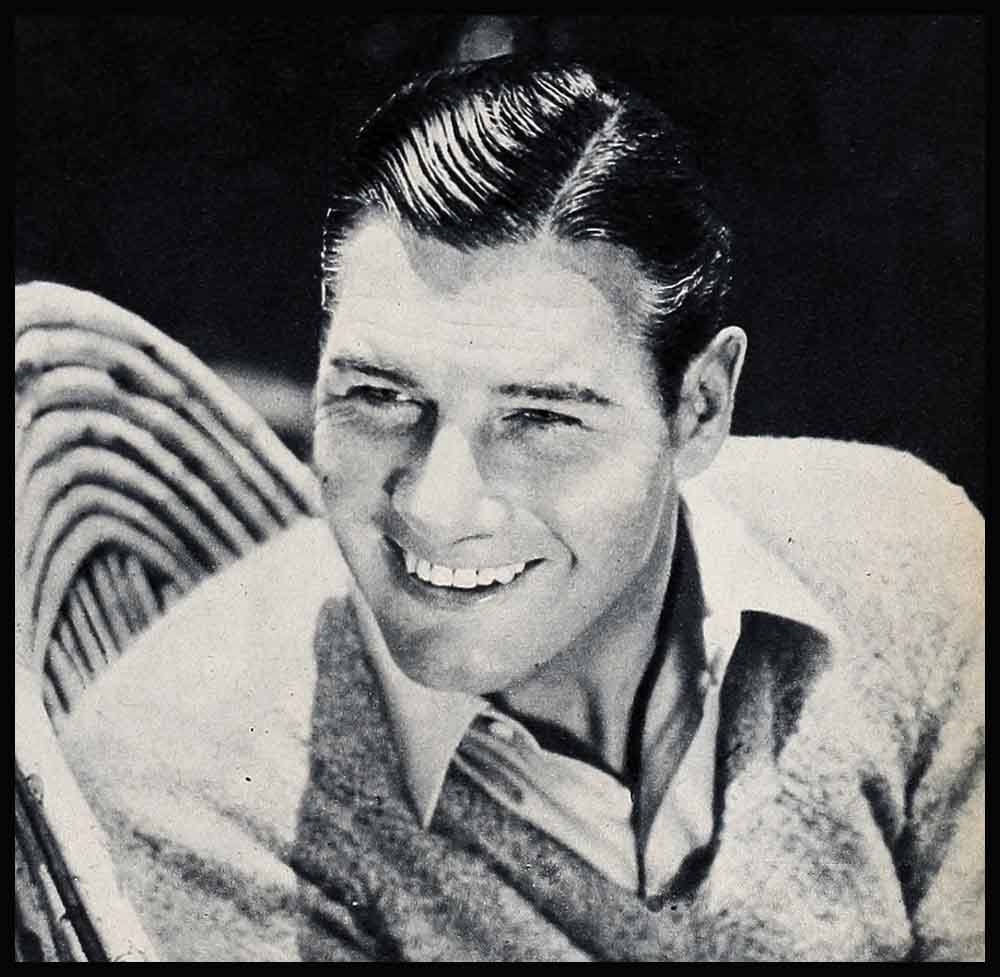 It was the day before Christmas and the young man wandering down Hollywood Boulevard was broke, jobless and blue.

Suddenly before him something gleamed white on the sidewalk. He reached down and picked it up. It was a small white elephant with a piece of chain still attached. Evidently it had dropped from some child’s bracelet.

He looked at it a long minute and felt the surge of hope and promise course through him. Here was the sign—he knew he would never be jobless again.

And what’s more, Richard Arlen never has been. The day after Christmas Jesse Lasky gave him a job. That was twenty years ago and he’s never stopped working since.

It’s a funny thing about Arlen, too. All about him beats the hullabaloo of Hollywood, the ballyhoo of newcomers, the hubbub of glamour and success, the dim-out of receding glory. It never touches him. He goes right on making pictures year after year, his work flowing on like the current of a slow lazy river. He lets the others do the galloping off into oblivion.

Forty odd years old, he looks twenty-five. Women tum to gaze after him, attracted by the abundant hair that waves back from a good forehead, the fine figure, the mannish attractiveness. Men like him for the square look in his eyes and the sense of fresh air about him. It may be that he carries with him part of the washed skies in which he’s spent so much of his life. For he was a flier long before he was an actor.

His important arrangements, business or social, are always settled with a handshake. He never signs a contract with motion-picture producers. His word is good and they know it.

He’s an established success as a man rather than as an actor—a man who has many business interests, one of which is acting, and he does a good job of all of them. Twenty years ago he began in the industry by getting run over while acting as a messenger boy delivering cans of motion-picture film to a laboratory. Fortunately, the man whose car trespassed over Dick’s person, fracturing his leg, was a motion-picture producer who in retribution offered Dick a job as a bit player at $75 a week. After six weeks in the hospital, Dick took it.

When the studio asked his name he was so sure he’d be an absolute failure, he didn’t want his family to guess, so instead of his right name, Richard Mattemore, he gave the first name he could think of. It was Richard Arlen. And instead of his native city of St. Paul, he placed his birth way down in Charlottesville, Virginia. It was the remotest place he could think of. Not to this day has he been to Charlottesville.

His movie beginning was slow. There were four bit parts before his big chance in “Wings” came along, putting not only Dick on top, but director William Wellman as well.

Dick knew ali about those wings, too, for as a kid of seventeen he’d gone to England and joined the R.A.F. He could fly like a Mallard duck. In fact, many years later Dick established a flying school with a chap named Probert, and the Arlen-Probert School of Flying at Van Nuys flourished. He took two years away from the screen for this work and did most of the coaching himself. To him came Jimmie Stewart, a gangling new actor at M-G-M, for his first lessons that have since aided him in his work as Lieut. Col. Stewart of the U.S Army Air Corps. One of the closest call Dick has ever had was with Jimmie—when they had to make a forced landing in, of all places, a haystack! Thank to the hay, both of them came out of the incident without a scratch. Wayne Morris who now wears the Distinguished Flying Cross, Andy Devine, Priscilla Lane and Bob Taylor, now a Navy lieutenant, alreceived their first instruction from Dick.

When the government ordered all privately owned flying schools abandoned Dick volunteered as a lecturer and consultant. He sat in a Dallas hotel room for two months and crammed the whole course into that time. What’s more, he passed.

Dick is a one-woman man and seldom plays the field. He usually has one girl at a time and she remains his sole interest until the friendship is over. For the past year Maggie Kinsella, a society girl from Long Island, has occupied this place in Dick’s life and for the first time since he and his wife Jobyna Ralston decided to separate seven years ago, Dick seems definitely interested.

He and Joby have never been divorced. They talked over their marriage, knew it couldn’t work out, shook hands in good fellowship and parted.

After they parted, Dick took a large ranch in the Valley, the house tastefully decorated, the ranch abundantly stocked. He sold it when the war caused a shortage of help, and moved into an apartment, but that was not to his liking, so he has bought an acre and a half plus a small house out San Fernando way that may be the beginning of a new life for him.

There’s an aura of loneliness about him that can’t be explained. It reaches out and strikes a responsive chord and yet—it never completes a current. He seems eternally to move alone, to walk alone, to think alone. You never see him or hear him at parties or among crowds of people.

“Now I’ll see you soon, won’t I?” he says. And the heart agrees, but somehow it’s a long time before you meet again.

Part of the answer may lie in Ricky, or Dick Jr., the son whom he adores and who perforce cannot be part of his daily life since he is Joby’s son, too. Ricky is eleven and attends Harvard Military Academy in Hollywood. Occasionally you’ll see the two shopping together, usually for a present for the boy’s mother. They take trips together, father and son in perfect understanding. He has reasoned Ricky out of many excursions into deviltry.

Once Ricky set fire to a bedspread. Instead of trouncing him, Dick set out to show Ricky he’d been pretty silly, a bit on the stupid side. “Now think it over,” Dick said, “and tell me what you think.”

For twenty minutes there was quiet in the room. Finally Ricky broke down. “It was silly,” he admitted. He never played with fire again.

The real love of Dick’s life next to his son is his sailboat. Every spare hour he has away from pictures is spent on his boat, painting it, keeping it in shape.

He likes golf and the open air. The air within sound stage walls gives him a feeling of being cramped in. Dick believes this is really why he prefers outdoor pictures.

From Paramount he joined the Pine-Thomas unit and with Chester Morris made a dozen or more fast snappy action pictures. No w he’s at Republic, signed to do three pictures a year and, smart business man that he is, Dick makes sure in advance that his pictures are sound and entertaining. On personal appearance tours, or on government flying business he makes it a point to visit the exchange men in various cities who show his pictures, to get to know them, to have a feeling of making their commodity known to them as a living product. The dividend it pays is terrific.

Oddly enough, his smoothly running career is high-lighted by movies off the beaten path. After “Wings” his next exciting detour was in the sophisticated farce “Three-Cornered Moon” with Claudette Colbert. It was good and so was Dick. And then England sent for him in 1936 and Dick spent eleven months making pictures for Gaumont British and gathering the lovely old rosewood pieces that graced his Encino home and will now go into his new Valley home.

He likes and understands newspapermen because he was once a reporter himself. “If you think you have to print that story,” he’ll say, “go ahead. You know your job.” As a result they seldom print rumors about Arlen. They wait for facts.

For years Leander, his colored valet, has looked after him—a polite and genuinely kind servant who does a little of everything about the place, getting Dick up at 6:30 when he’s movie-making, cooking breakfast, looking after his clothes, remaining in the apartment when Dick is off to his boat or on a flying mission.

And Dick is ever thoughtful of Leander, recommending a potato carried in the pocket for his arthritis or an onion for some other ailment. At present Leander is a walking vegetable salad.

His eighty-six-year-old mother, Mary Mattemore, who drives her own electric car and raises all sorts of old Ned around St. Paul, is his pride and joy. His stories of her are priceless—of the time she complained bitterly of not being able to see without her glasses, misplaced or lost. Accidentally Dick dropped a twenty-dollar bill on the floor across the room from his mother and before he could reach it, Mary called out, “Don’t touch that twenty. I dropped it there this morning.”

And there was the town furrier who confided he’d had to give Mrs. Mattemore a new coat. “She brought in the sealskin coat she’d had for fifty years,” the furrier told Dick, “and complained it hadn’t held up at all.”

There’s a depth of understanding about Dick that’s touching. When it came time for him and his sister and brother to decide whether Mary was either to live with one of them or take a little place in the country, it was Dick who came forth with the suggestion that brought a glow to his mother’s young heart: “How would you like to live right down town in the swankiest hotel in St. Paul?” he asked.

If he’d suggested heaven, she couldn’t have been happier. And there she lives!

He’s a mite proud of his youthful appearance and he has every right to be.

One evening he was sitting in a night spot with his twenty-one-year-old daughter by a former marriage who had come on from the East to visit her dad.

John Wayne passed and stopped, “Why you playful old man you,” he kidded Dick, “out with such a young girl.” And Dick still can’t make Wayne believe it was his daughter.

He gives to others and yet somehow one feels he experiences very little real emotional happiness for himself. Perhaps, if and when he and Joby decide to make their long separation a legal one and he marries again, Dick may then experience a happiness sufficient to round out and complete his life. For certainly it is deserved by a guy who says so simply and earnestly and means it,

“So many nice things happen in Hollywood.”