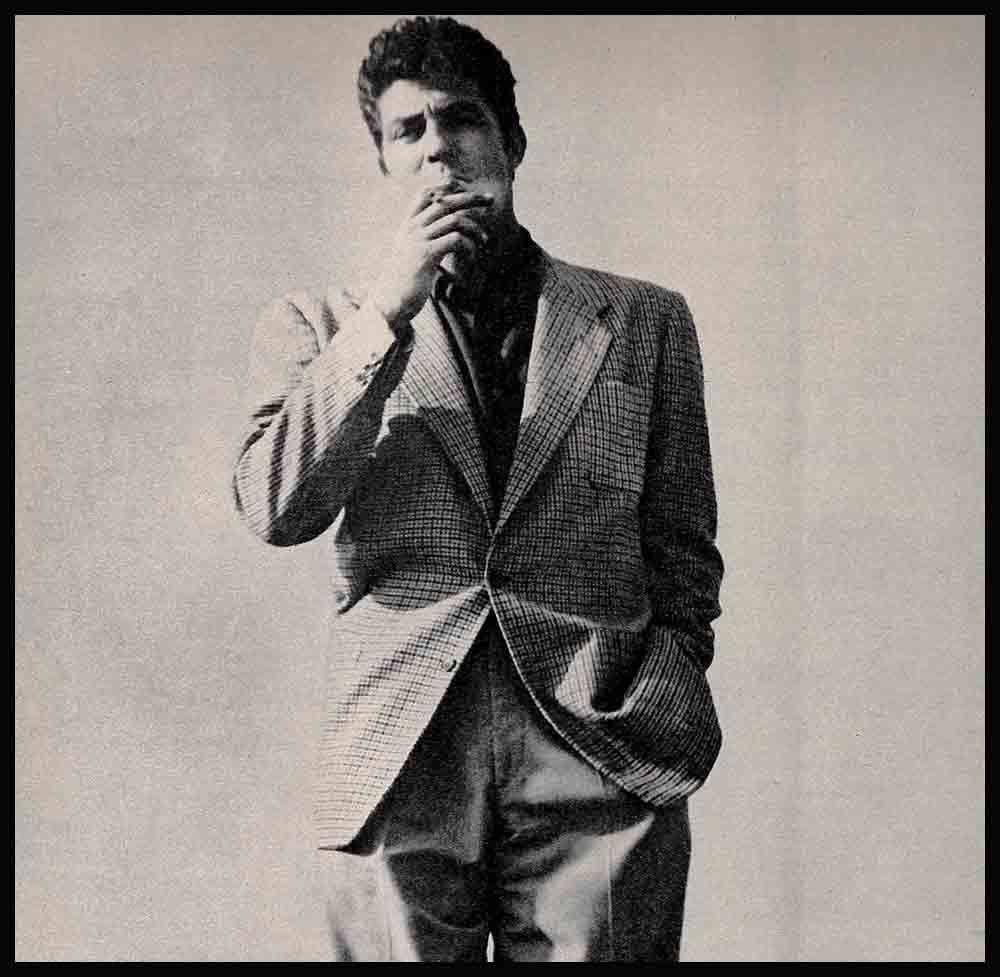 Can Dale Robertson Save His Marriage?

Can the Dale Robertsons still patch up their marriage?

All Hollywood has been pondering this question—and wishing them well—since news of their reconciliation late last fail first fell upon eager, friendly ears.

Shock had been the universal reaction when, on that gloomy Sunday last October twelfth, Dale threw a few personal belongings into a satchel and closed the door on his San Fernando Valley bungalow. The bungalow had been home for him and his bride, the former Jacqueline Wilson, since their marriage only a year and five months before.

During their brief parting at that time, both Jackie and Dale secluded themselves in the homes of friends and ducked the persistent bloodhounds of the press, while they “thought things out.”

At that time, Dale said: “I think the trouble will blow over. But I think right now it is better for us to be separated for a while.”

And Jackie, talking off the record, indicated that she still loved her big, Oklahoma-salted “wild colt” of a husband. But she implied that she was not satisfied with love or a marriage that is a one-way Street.

So they separated, and they “thought things out.” And they concluded, evidently, that they would try hard to tum that thoroughfare of marriage into a broad avenue that runs both ways.

While the Robertsons’ real friends held their counsel during that turbulent period, the gossips were avidly (and acidly) guessing at the cause of the rift. The hints were broad and the rumors numerous and varied. “Sensational developments,” had been the whisper, “can be expected as the real inside story of the quarrel comes to light.”

The rumor most widely circulated was that Dale was infatuated with another woman. The Miss X of these stories—or Mrs. X, rather—was said to be a blonde charmer who was herself a recent bride.

Both Dale and Jackie refused adamantly to talk about this much-discussed version of their differences during that short and unhappy separation. And now that they’re back together, they are even less willing—and logically so—to acknowledge that such rumors had ever made the rounds. But their close friends have commented, at length and passionately. “There was no ‘other woman,’ ” these confidantes of the warring couple insist. “And no ‘other man.’ ” It is their feeling that the Robertsons’ marital trouble had been a long time a-brewing, and that the differences were there long before Dale reported to his studio for work on “The Silver Whip,” during the filming of which, allegedly, the whispered “new romance” was supposed to have begun.

These differences—the real differences, according to devoted friends of both Dale and Jackie, make far less sensational reading than the romantic triangle which had been hinted at. They are deeper, more basic, and therefore, unfortunately, much harder to work out. Yet, if the Robertsons are to try to save their marriage, to reinstate it as a working partnership, they will have to face up to these differences—and they’ll have to make compromises.

“They’ll have a lot of forgiving to do, before they can get back together,” an intimate girl friend of Jackie’s sums it up. “And then a lot of giving to do, after that, if the reconciliation is to take. It will be hard for them both. Jackie is proud. And Dale, the most charming guy in the world otherwise, is downright stubborn. But I think they’re in love with each other, still. And I know they are both mad for their baby daughter, Rochelle, who was three months old just two days before her parents separated.

“I think they will both try. And everybody who knows them hopes that they will succeed in working things out. For they’re both wonderful people.”

So that’s what it comes down to: two vital human qualities—Jacqueline’s pride and Dale’s stubbornness. And these two “heavies” can be more dangerous to the Robertson marriage—and to any marriage, for that matter—than any threat from the outside, no matter how sexually supercharged.

They knew that making a successful marriage in the tension-ridden atmosphere of Hollywood was a complicated and risky business, even for a stable and mature couple. And they were very, very young—Jackie was just nineteen—and they had a whole world of living and learning, and possibly of making mistakes, in front of them. Learning to unmake mistakes is a slow, but always hopeful, process.

They had determined in advance to avoid that evil-eyed old shipwrecker, Career Trouble. Although Jackie was nicely started on an acting career of her own—she and Dale met for the first time, remember, on the set of “Down Among the Sheltering Palms,” in which she played a small part—she decided with wisdom beyond her years that one acting career in the family is problem enough. Her job, once she was Mrs. Dale Robertson, would be just that—to be Dale’s loving wife and homemaker, and mother to the brood of four or five small Robertsons they confidently expected to have.

There would be absolutely no question that Dale would be the man in the house, the breadwinner. For one thing, his fierce masculine pride would have had it no other way. And certainly there was no question that he could fulfill this responsibility—his star was rising in pictures. Many years on top seemed certain to be ahead of him.

And Jackie was admirably equipped for her feminine role. Educated in the best eastern private schools, bred to be a lady in the old-fashioned sense by her socialite parents, she was—even if under twenty—a poised and gracious woman ready in every way for marriage.

The pitfalls they had not foreseen came in the areas of their life together where their two roles overlapped—the occasions when Jackie must share Dale’s life in the limelight as the wife of a celebrity, and the even more important times when Dale, as every young husband must, would be called upon to share the responsibilities of the household and, later, the family.

Breaking Dale Robertson to domestic life proved very soon to be as difficult a task as taming some of the horses he breeds on his California and Oklahoma ranches. A man’s man to the core, Dale is a guy who simply cannot stand a rein. It was incomprehensible to him that any woman, including his wife, should have the right to ask where he had been, and with whom, and how late. That he should be expected to telephone if he would be late to dinner, should be required occasionally even to show up on time, was, to him, a gross abridgment of his freedom.

What happened, after awhile, was that Dale worked—or played—day and night, kept up his million and one contacts with his studio friends, his soft-ball friends, his horse-fancying friends, his dog-loving friends, while Jackie—who had given up her old friends to devote her life to Dale— sat at home in the valley. There were some especially lonely months when she sat there solitarily with the toys and tiny garments she had been assembling for their expected child.

Actually, Jackie’s disillusion set in before her honeymoon was over. Dale took his bride to a beautiful seaside resort in Santa Barbara, and Jackie was enchanted with the prospect of long, quiet hours in the sun—just the two of them. But it turned out that Dale had chosen Santa Barbara for their honeymoon destination because an important horse show was in progress there. They spent the entire day after their marriage ceremony admiring horses! Now Jackie likes horses as well as the next one; she is, in fact, an expert horsewoman herself. But on her honeymoon! Dale couldn’t have been more surprised that she should object. What else, his shrugged shoulders asked, does a guy do on his honeymoon?

Jackie Robertson, on the afternoon of her marriage, was a gay, outgoing, confident girl. A short month later she was subdued, withdrawn, and, her best friends thought, unhappy.

Even the people who love Dale best, and know him best, could see what was happening, and they were inclined to see it from Jackie’s point of view.

When their separation occurred, Dale’s best friend, Kit Carson, talked to him like a Dutch uncle. His mother flew out from Oklahoma City to do what she could to save her son’s threatened marriage. At first Dale resisted all compromise.

Jackie wanted him, but not at any price.

Obviously, since they’re trying again, somebody gave in, or, more hopefully, both conceded some ground.

Dale, it is certain, was happy to move his toothbrush and razor from Pal John Carroll’s guest room, and to get back to the quiet atmosphere of his valley home where he could “take off his gaiters” and relax to the music of soft baby sounds from the nursery.

The reconciliation, of course, may not work. The Robertsons have faced their problems, but the harder task of solving them lies ahead.

But then again, it very well may work. And all of Dale’s and Jackie’s friends are hoping so.

“They’re good, kind and sensitive people, these two,” one of their best friends put it. “And when they were married—there’s no doubt about it—they had every intention of marrying for keeps.

“Any two people who feel as strongly about each other as they do, and who are willing to face up to the pitfalls honestly and courageously, as they’re doing now, deserve the help of all their friends—and the best of luck.

“Things have to work out—because they’re such wonderful folks.”