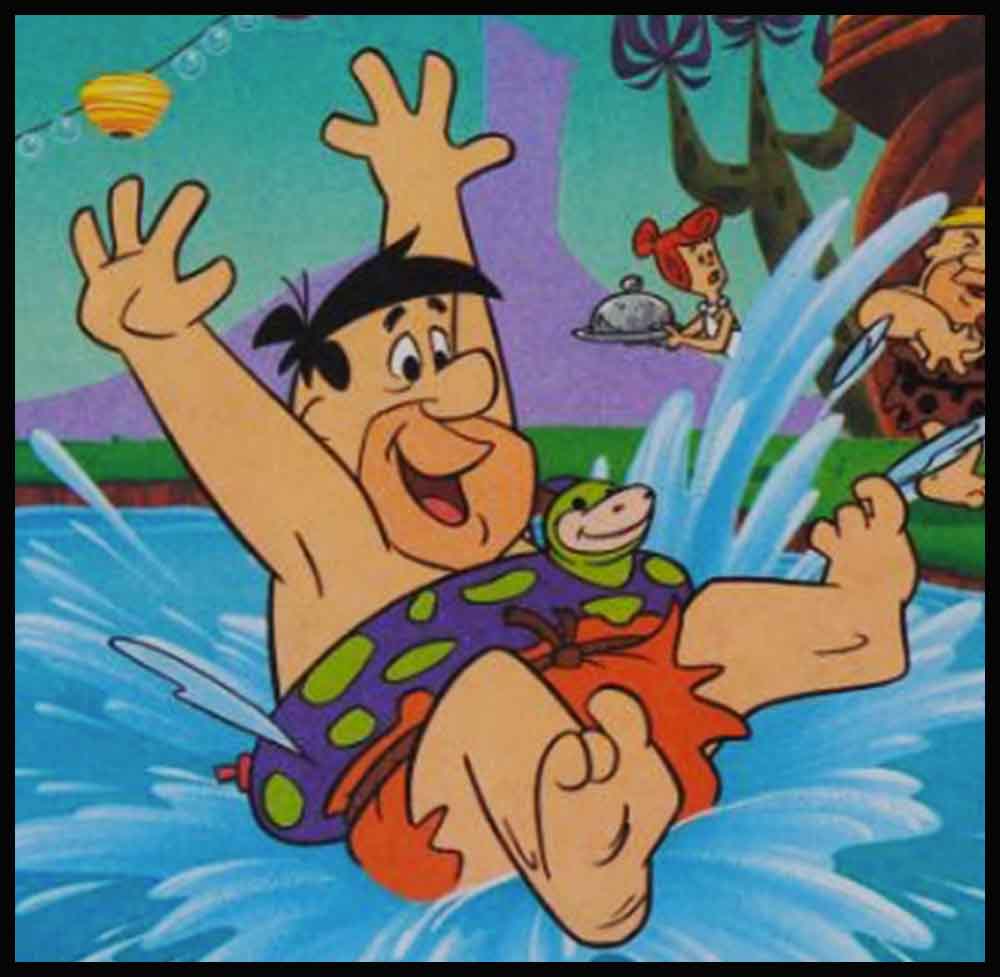 in Comic Book
by admin

It was a lovely summer evening in Bedrock. Fred Flintstone arrived home, looking forward to a relaxing dinner with his family.

“Look what I picked up, Wilma,” he announced when he came through the door. “A couple of Bronto steaks, two inches thick. Wait until you taste them! Deeelicious!”

Wilma unloaded the groceries while Fred played with Pebbles.

“They look a little on the thin side, if you ask me,” she said, holding open the empty sack.

“Come to think of it, I did put them down for a minute when I got the mail — that’s when that little sneak must have snatched them!” Fred said as he stormed out the door.

“Hi, neighbor!” called Barney cheerfully. “Come on over and look at these beauties. Two inches thick! Makes your mouth water, doesn’t it?”

“It ought to!” shouted Fred, grabbing the steaks right off the grill. “I paid for them!”

“Hey, let go of my dinner!” demanded Barney, as he tried to wrestle the meat back from Fred.

Wilma hurried across the Rubbles’ yard holding a large white package. “Fred!” she commanded. “Let go of those steaks this instant. I found the ones you bought right here. You left them on the mailbox outside!”

“Why should I?” Fred grumbled. “This whole thing is your fault!”

Five long days had passed, and Fred and Barney were still refusing to speak to each other. That’s when Wilma and Betty decided to take action.

“I told Barney to come over and make up with Fred or else I’d invite my mother over for a few weeks,” Betty told her friend.

“What did he say?” asked Wilma. But before Betty could answer. . .

“Hi, gals!” said Barney, coming through the door. He was looking for Fred.

“Oh, Fred, a friend of yours is here!” Wilma called out to the backyard.

“If his name is Barney, then he’s no friend of mine!” Fred yelled back.

Betty and Wilma were determined to get them to talk. They dragged Barney outside.

“It’s OK, Wilma,” Barney said, “but as long as I’m here, I’d like to pick up some property of mine which a certain person borrowed but never intended to return — namely, my ladder.”

“Help yourself,” said Wilma, gesturing to where Fred was working on the roof.

Barney grabbed the ladder. “I believe this is mine,” he announced.

“Hey, wait a minute!” Fred yelled, as he tumbled off the roof. “At least let me down first!”

Fred flew through the air. He missed the ladder and landed in a large hole in Barney’s backyard — a very large hole.

“Fred, are you all right?” asked Barney as he rushed to his friend’s side.

“I will be as soon as I get out of this stupid hole and give you what’s coming to you!” Fred snarled.

“That’s not a stupid hole!” protested Barney. “That’s the beginning of my new swimming pool. I’m going to have swim parties, barbecues, water polo — the works!”

“Gee,” Fred said sweetly, as he crawled out of the ground, “too bad we’re not friends anymore, neighbor.”

“What do you mean?” Barney asked.

“OK, buddy, I was saving this as a surprise but — here it is, just for you — a do-it-yourself pool kit!”

“Gosh, Fred, how could I have ever doubted you?” said Barney gratefully.

“Well,” Fred began, “we could build this thing together — half in your yard and half in mine. Then we could share the expenses. What do you say?”

Barney thought for a moment. “I don’t know,” he said hesitantly.

For the next three weeks Barney dug and dug while Fred shouted instructions from his favorite lawn chair. Finally, it was time to fill the pool with water.

“Keep up the good work, Barney boy!” Fred encouraged his pal. “Only four thousand more buckets of water to go!”

“Aw, Fred, at this rate it’s going to take all day,” Barney complained. “My half isn’t even filled yet.”

“You are?” asked Barney hopefully.

“Sure,” said Fred. “I’ve found a bigger bucket for you.

This should do the trick.”

After the pool was finished, Fred used it every chance he could. He was always decked out in his snazzy new swim trunks.

One day, Fred headed out for a swim, calling “YabbaDabba-Doo! The last one in is a hot potato!”

He was stopped dead in his tracks.

“Oh, those are members of the YCMA — the Young Cave Men’s Association. I’m letting them use it,” Barney explained.

“And last week it was the Boy Scouts, and Monday your relatives!” Fred yelled. “When do I get to use my half of the pool?”

“Excuse me, neighbor,” interrupted Barney. “But Tuesday night you had your club over, and last night the bowling team!

“Well, there’s only one way to solve this problem,” Fred hollered. He grabbed a big boulder.

“Yeah!” snapped Fred, and he began building a wall of boulders across the pool. “We need to cut this pool right down the middle.

“For once, you’re right!” shouted Barney.

That night, Wilma put her foot down.

“Listen to me, Fred,” she said. “This constant bickering between you and Barney has got to end. He happens to be married to my best friend!”

Next door, things weren’t going much better. “I want you to march outside right now and take that wall down, Barney Rubble!” Betty demanded.

And so, the next morning, while Wilma and Betty supervised, the wall came down.

The next day, Fred still wasn’t speaking to Barney. When Betty came over to see Wilma, Fred tried to listen in on their conversation.

“Don’t forget, Barney’s having the gang over this afternoon. Does Fred know?” Betty whispered.

“No, but I’ll just tell him Barney is having a pool-warming party,” Wilma promised.

After Betty left, Fred exploded. “I can’t believe it!” he said. “That ingrate thinks he can go ahead and use my half of the pool without me knowing about it! Well, I’ll show him a thing or two!”

“I don’t know what you’re up to, Fred,” Wilma warned him, “but you’d better not cause any trouble tonight!”

“Why, Wilma, I wouldn’t dream of it,” answered Fred.

The minute Wilma was out the door, Fred called his old friend Charlie. He planned to play a nasty trick on Barney. “Listen, Charlie,” Fred began. “Remember that policeman’s uniform you wore to the Halloween party last year?

“Sure, Fred,” said Charlie. “I remember. Yes . . . I could show up at Barney’s house and pretend to arrest him for disturbing the peace. It will be a riot!”

That afternoon there was a knock at Fred and Wilma’s door. When Fred answered, there stood Barney, surrounded by all of their friends.

“Happy Birthday, Fred!” shouted Barney. “Even if we have been fighting lately, I couldn’t forget my bosom buddy’s big day. Come on over for your birthday pool party!”

“Aw, Barney boy,” Fred said, slapping him on the back. “You shouldn’t have!”

Everyone headed to the Rubbles’ backyard where an enormous birthday cake was waiting on the patio. Just as Fred was about to blow out the candles, Barney’s next-door neighbor leaned out his window.

“Hey, quiet down out there! Ever since that pool went in, I haven’t slept a wink!” he barked.

“Gee, I’d like to help, but I’m afraid you’re all wet!” said Fred, diving into the pool.

Within minutes, a squad car rolled up to Barney’s house, and a police officer came around to the backyard.

“No problem, Officer,” said Barney. “Would you like a piece of cake?”

“Just then Fred swaggered up to the officer.

“Charlie?” the policeman asked. “Charlie who?”

Just then Fred picked the officer up and tossed him into the deep end.

“Fred, have you flipped?” Wilma cried.

“Uh, hi, Fred,” Charlie said, coming up behind him. “I couldn’t get that policeman’s costume for tonight. Sorry.”

“Then who’s that in the pool?” Fred wondered aloud.

“I didn’t even get to have a piece of my own cake,” muttered Fred.

“Boy, am I glad to see you!” Fred said with relief when Barney arrived at the jail.

“Well, what are neighbors for?” asked Barney.

“I’m sorry we haven’t been getting along lately, Barn,” Fred admitted.

“Aw, that’s all just water under the bridge,” said Barney, smiling. “Pool water, that is! Now, let’s get you out of here as fast as we can.”

“How about a little moonlight swim?” Fred asked after they got home. “YABBA-DABBA-DOO! Last one in is a — WHOOAAAA!”

Fred ran so fast that Barney couldn’t warn him.

“Sorry, but I had to drain the pool when I cleaned it,” Barney said. “Besides, it’s late — time for you to say good night, Fred.”