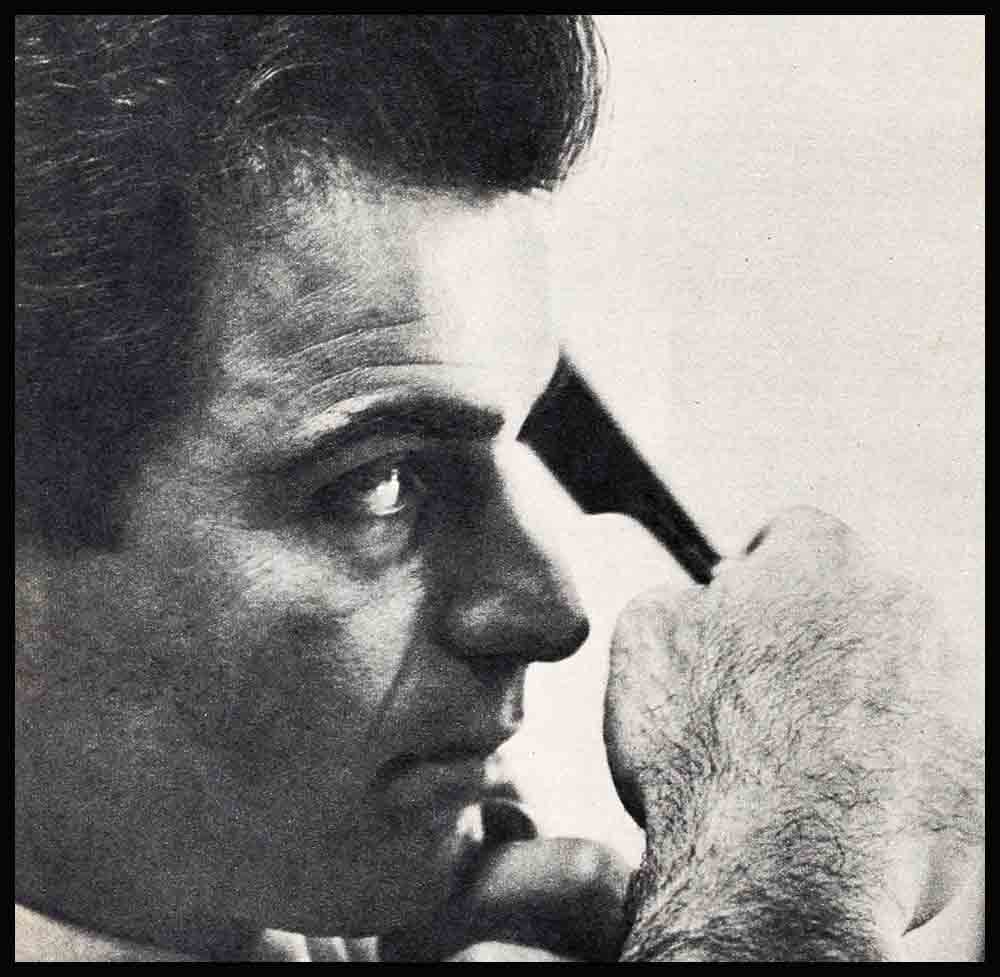 They got a new shipment of hope in this place. I sense it. I watch it. The unemployed actors and actresses are determined to hold on. “The Uncastables” have been given a shot in the arm. And who gave it to them? Ben Casey—that’s who. They figure if Vince Edwards can make it to the top, they can, too!

Vince Edwards! Are you kidding? A year ago you could get fat odds against Vince being TV’s Actor of the Year 1962. I can hear one hopeful in Schwab’s Drug Store shouting to another, a few stools north, “I’ll take half of that bet!” But now that it’s happened, there’s no one happier than “The Uncastables,” except maybe Vince himself. And his agent. Do you realize what this means to the Coke stretchers, the coffee stretchers?

Vince Edwards is a star. People ask for his autograph instead of asking him to leave. He no longer has to identify himself when he wants to cash a small check. What am I saying? The check doesn’t have to be a small one. Any amount for the good doctor! And who doesn’t recognize him immediately from TV?

It seems like only yesterday that Vince Edwards was sitting in Schwab’s saying, “If Jim (Garner) can make it, I can.” Garner was also a member of the crew of the good ship Schwabadero. What’s more, I’ll wager right now there are at least one hundred guys on the Schwabadero (the crews rotate) who are saying to friends, or muttering to themselves, “If Vince can make it, I can.”

This isn’t said or muttered to belittle Vince. They’re just giving their egos a much needed massage. They’re permitting themselves to do some positive thinking again. Believe me, it’s rough for the struggling performer to have hope these days. The obstacle course to fame is long and tough. You can’t get the lead in a grade A movie or TV series unless you have a name for yourself. And you can’t have a name for yourself unless you get one of those grade A roles.

It’s a vicious circle. There are no Standard rules to follow. You can’t take a course, receive A in all your studies, be handed a diploma and graduate a star. That’s okay for a doctor or a lawyer or even an astronaut. But there’s no text book on “How to Become a Movie Star.” You ad lib it.

Secret: he had girl trouble!

Vince wasn’t discovered sitting on this stool having an ice cream soda. Vince sat on this stool many times trying to figure out the rat race. It wasn’t just the career. It was chicks, too. Vince was having his troubles those days—and nights.

It could be that things weren’t as bad as they looked. Vince is a natural brooder. He can look as if he’s brooding while he’s only remembering the good time he had last night. This brooding look is of tremendous value in portraying Ben Casey. The audience writes in their own lines and credits Vince with being a great actor. Vince is only doing what comes naturally.

It’s about time nature paid off for him.

Vince arrived in town via a Hal Wallis contract. Wallis had seen him on television’s “Studio One.” That’ll give you an idea of the year—1952. Wallis is the producer who signed Burt Lancaster. Dean Martin and Jerry Lewis, Shirley MacLaine and others when they were nobodies. So Vince Edwards thought he was sitting pretty.

He was only sitting. He sat out a two-year contract. Maybe he did a bit in a Martin and Lewis picture. What’s so pretty about that? He was supposed to be “another Burt Lancaster.” At the end of the two-year contract, Vince was just another actor out of work. He went over to Schwab’s and was big in “The Uncastables.”

He called the waitresses “Honey” and they called him “Vince.” He got a bigger scoop of ice cream and a bigger hunk of pie from them. He had sex appeal. Those waitresses knew what Vince had even before he became an interne.

The trouble with the men who make movies was they always cast Vince as a gangster. He scowled, he brooded, he was rugged—and he did a couple of low budget movies which were sleepers. He was an excellent gangster, but these roles didn’t do for him what they did for Cagney, Robinson and Bogart.

For Vince, it didn’t happen until someone (James Moser) cast this gangster type as a doctor. Television was no longer a wasteland for millions of viewers. A man had arrived on the scene. A man-man who wasn’t a cowboy or a private eye or an FBI agent. Just a regular, honest-to-goodness, virile, masculine man-man. He created a sensation. The women dialers had never seen anyone like him before. (They didn’t know they were getting a gangster in doctor’s clothing.) Temperatures and ratings went up.

And this brings up two interesting side-views:

1- It didn’t happen for Vince Edwards until the TV series “Ben Casey.” And for ten years in Hollywood Vince had been trying to make it happen. It’s a good thing Vince didn’t have it his way. Suppose he had clicked for Hal Wallis or caught on in one of those gangster roles? He might be fighting to hold his position, instead of being the sensation of 1962. Few actors know what is best for them. Their careers have to be planned and arranged for them. Actors shouldn’t be left on their own. I always remember it was an actor who shot Lincoln.

2- Vince Edwards’ big appeal is to the females. They dig him. They write him about 3,000 letters a month.

Back aboard the Schwabadero, I recall Vince as a torch bearer. He never had any trouble getting a chick—his trouble was that the chick decided to call the whole thing off before he was ready.

There was a torch named Sally Todd. She was pretty and as shapely as they come. She was going to be a movie star. She and Vince were going to be something like the Lunt and Fontanne of the movies. I wonder what’s become of Sally? I’d like to watch “Ben Casey” with her one of these evenings. Should be good for a few paragraphs.

There was a torch named Jackie Loughery, Miss USA, I believe. She lived around the corner from Schwab’s. I know what became of her. A few years ago she became Mrs. Jack Webb. After the first “Ben Casey” program, Jackie phoned Vince and said, “I’m sitting here with Jack. We just watched your program. Very good. Only Vince, you’re doing what I told you not to do for years. You still stoop over too much.”

Will you excuse me, please? With that new shipment of hope being distributed, I’d better wander among the characters so I’ll know who next year’s new stars will be—and then I’ll be able to do another expose. This is the only kind of expose I like to do.

See Vincent Edwards in “Ben Casey” on ABC-TV, every Monday at 10 P.M. EDT.