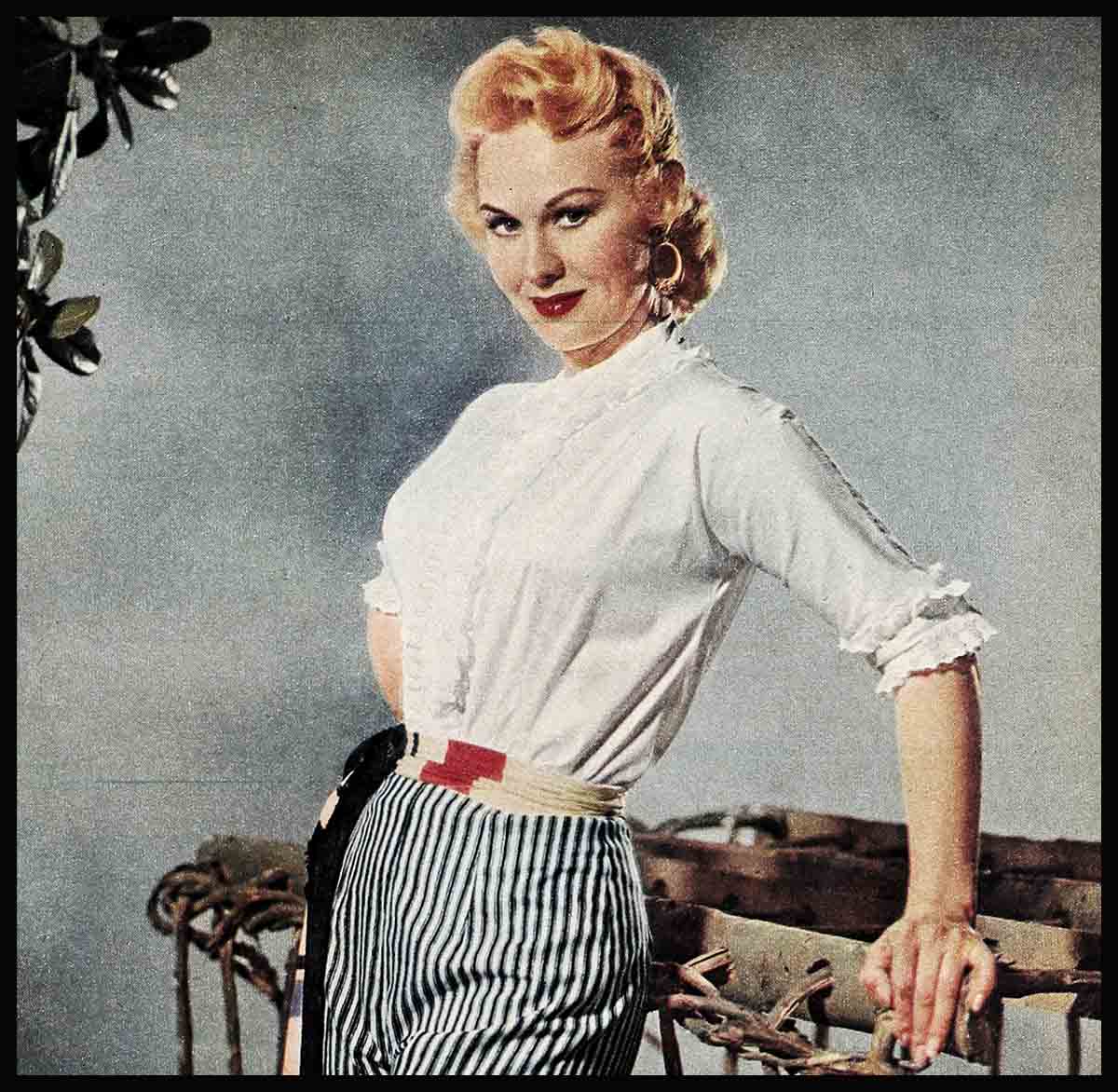 One evening shortly after the birth of her baby Mary Catherine, Virginia Mayo walked into her living room and found herself the object of a searching, and not altogether approving, scrutiny by her husband, Michael O’Shea.

While she stood there uncomfortably wondering what this was all about, her husband turned and began to stare just as hard at the larger-than-life painting which showed Virginia as Lady Barbara in “Captain Horatio Hornblower,” a beautiful gift from her studio.

Virginia looked at the painting, too, and then she looked down at herself. Mike had been teasingly calling her “Fatso,” but now she suddenly knew: he was no longer teasing. Comparing her present figure to the lithe, glamorous one she had had before the baby came, she realized how much she had been cheating her husband—and herself—by allowing herself to become overweight and to lose that magnetic allure that had been so important a part of her charm.

Recalling that incident now, Virginia says, “Right then and there I decided it was time to take steps.” Then she grins mischievously and adds with purely feminine logic, “Besides, I had a whole closet full of wonderful clothes I wanted to wear again.”

And with characteristic enthusiasm, making up her mind was actually the same thing as getting started. First thing the next morning, she sat down with her doctor and really listened to his explanation of the calories in the different types of food and in the various methods of preparing foods—the theory of dieting. She had heard it all before, but this was the first time she really listened.

All during her pregnancy Virginia had been imply famished. It was her first vacation in years, and she was in a deepening state of wonder and excitement and inner peace and a miraculous sense of fulfillment—all brought on by the knowledge of a new life stirring deep within her. She didn’t require any special dishes—nothing exotic as some mothers-to-be report. Just food. She loved staying home. She was content to become more and more indolent.

And the calmer and more lethargic lovely Virginia became, the more pounds appeared. At each visit to her doctor he counseled moderation and urged, as every modern obstetrician does, that Virginia try to limit her weight gain to around twenty pounds. She did everything the doctor said—the calcium, the milk, the vitamins—but her body seemed to need extra food in ever-increasing quantities. And the only time she could restrict herself was the day before the dread appointment for the monthly visit to her doctor rolled around again.

Then she’d diet like-mad. But of course-it-didn’t do any good when she stepped on the scales in the doctor’s office. And she even made her appointments for right after breakfast because she knew she’d weigh less then than after lunch. By the time the baby was born she’d climbed to a figure- shattering 157—a full 37 pounds above her normal weight!

But it wasn’t until husband Mike made the unflattering comparison between the Virginia in front of him in their living room and the Virginia in the painting that she saw herself as others were seeing her and decided to do something about it.

And by the time the doctor was through explaining the facts of a diet to her, Virginia was beginning to realize the penalties she was going to pay for having indulged herself. “What Price Food?” she sighed, inappropriately paraphrasing the movie title on glory.

As everyone knows, the trick of dieting is not just a matter of getting on one—it’s staying on one! How did Virginia feel about this necessarily strict diet her doctor prescribed for her (which we have presented complete for your convenience), especially after she had been on it long enough for the first flush of her enthusiasm to be worn off?

“Fine,” Virginia says. “The dieting had to be done—and I did it. I ate in tiny bites, chewed my food completely and very slowly and thus the meal lasted longer and made me feel more filled up. You know, most overweight people eat too fast—hardly know what they’re eating. The diet provided a wide variety for me to choose from. It wasn’t monotonous. And I stayed on it until I was at my normal weight—one hundred and twenty pounds. Come to think of it, let’s see what I weigh now.”

Virginia excused herself, returned with the news that she weighed 119—after lunch and dressed! Her breathtaking curved 5- feet-4½-inch figure was set off by slim-fitted black broadcloth toreador pants tastefully sprinkled with glittering copper pennies, a cream-colored form-fitting cashmere sweater, wide black belt and gold crocheted ballerina slippers which re-echoed the gold of her softly curling hair, worn pony-tail fashion. At the moment, Ginny could have posed for a “Petty Girl” painting. And looking at her, it was easy to see why she’s been dubbed the “world’s most beautiful blonde.”

Just then the nurse brought in Mary Catherine, ready for her afternoon airing in her pram around the one-acre O’Shea grounds. “Little Darlin’,” as her Daddy calls her, was all frantic motions, smiles and soft baby sounds at the sight of her lovely mother; her fuzz of red-gold hair half hidden under a jaunty yellow knitted beret, her round blue eyes twinkling with a touch of blarney, as she tried, at only five-and-a-half months, to stand up in her mother’s arms.

Virginia’s eyes lovingly followed her first-born to the door, and then she returned to the subject at hand. “Normally I never have a weight problem, because long ago I taught myself to form the habit of eating a well-rounded diet of high protein meats, eggs, cheese, vegetables, fruit low in sugar—a diet which gives me energy, vitality, an ideal weight, good muscle tone and also provides for healthy hair, skin and teeth. It’s not easy to stick to a sound diet because our country is such a land of plenty that it’s hard to limit ourselves to eating for beauty and health.

And what does Virginia put into her pretty mouth daily, now that she’s back to her normal weight?

“For breakfast I have grapefruit, two soft-boiled eggs, a slice of whole-wheat toast and coffee; broiled hamburger or steak, sliced tomatoes, grapefruit and milk for lunch; meat or fish or chicken, vegetables, salad, a slice of bread and butter for dinner. I love vegetables, but Mike hates ’em—all except potatoes. Imagine! Potatoes, ugh . . .

“Dieting all starts in the mind,” Virginia declared. “It’s a simple question of whether you want a good figure, whether you want to feel youthful and enjoy a long life or whether you’ll settle for the transient pleasure of eating too much. Before deciding to diet, check with your doctor. Then once the decision is made to change your way of eating, you’ve got to call on self-discipline and will power. For instance, I knew I was babying myself by eating too much while I was waiting for Mary Catherine’s arrival. And when I finally made up my mind, began to use my will power and stopped babying myself and actually followed the doctor’s instruction, the extra weight melted away because I’d had it such a short time.

“Some people don’t understand diets,” Virginia continued. “They go on one and follow it conscientiously until they have lost their excess weight. Then they go right out and ruin everything by eating the very foods that made them overweight in the first place. They go on an eating spree to celebrate having lost weight and gain everything right back again—sometimes even more than they had lost. It doesn’t make much sense, but that’s the way plenty of people do it.”

The next step came when Virginia’s doctor suggested, along with the diet, that she exercise to tighten her muscles after the baby’s birth. That was an easy assignment for Virginia. For she has known about the value of exercise ever since she was little Virginia Jones of St. Louis, studying dancing at her Aunt Alice Wientge’s drama school. This constant pattern of exercise all her life has conditioned Miss Mayo, given her the enviable proportions that elicit wolf whistles and, furthermore, made it easier for her to regain her figure quickly following her pregnancy. But if you’ve no pattern set for exercising, we suggest you talk to your doctor and have him recommend some exercises.

In addition to the exercises prescribed by her doctor, Virginia rides horseback and plays tennis. At present she is trying to improve her already good game by taking lessons from the renowned Alice Marble.

Returning to the studio to fit her costumes for “King Richard and the Crusaders,” Virginia discovered a curious fact. Her figure was exactly the same as it had been pre-maternity—except that her waistline had dropped an inch lower! The wardrobe department pondered this for a long time, unable to come up with an answer, but Virginia knew. The stretching movements she had so faithfully followed in her exercises had lengthened her torso!

And that was the only change in this glamorous blond while she trod the long road From Here to Maternity!

Following this remarkably varied diet conscientiously after she had her baby, Virginia regained the magnificent figure that helped make her famous. To understand this diet more fully, read also the explanatory footnotes.

NOTE: Consult your doctor before following this—or any other—diet that has not been made especially for you. This one was tailor-made for Virginia Mayo and her particular needs and requirements—not for yours. Show it to your doctor and ask him to make necessary changes.

5% vegetables include all others except fresh green peas, lima beans, parsnips, corn, potato, baked beans and navy beans, which are forbidden.

One multiple vitamin tablet daily as well as saccharin for sweetening tea or coffee at each meal was permitted.

It is a quote. PHOTOPLAY MAGAZINE AUGUST 1954