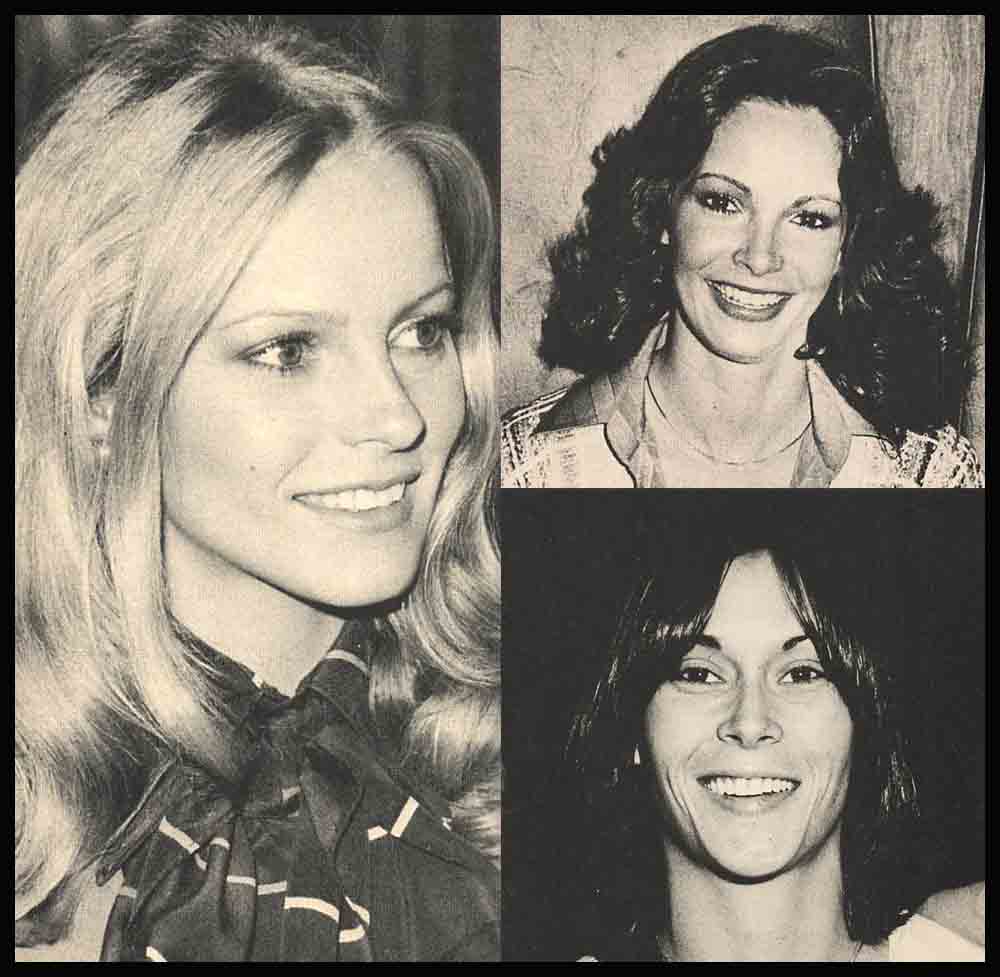 Although Kate Jackson won’t be returning to Charlies Angels next season (“that had to do with a Creative decision on the producer’s part,” her agent explained. “Kate had no choice in the matter. But she is not terribly unhappy about it,”) she will still remain friends with Jackie Smith and Cheryl Ladd, the other Angels. In fact, Jackie and Kate are near neighbors in an exclusive section of L.A., so they’ll definitely see a lot of each other. “We were thrilled to be able to get land near each other,’’ Jackie exclaimed after both stars and their husbands moved into their new homes. “Kate and I both want children, and there’s nothing that would make us happier than to have them grow up together, like kids in the South. There’s a special kind of relationship in that; a lovely sort of friendship. . .”

Of the three actresses. Cheryl Ladd is the only one who has a child as of now. Cheryl, happily wed to David Ladd, is the concerned and sensitive mother of 4-year-old Jordan. “My husband and my child come first,” says Cheryl firmly. Unlike other career mothers who say the same thing but allow their career to intrude on their personal life, Cheryl means what she says. Jordan comes on the Charlie’s Angels set very frequently. When Cheryl isn’t filming, her time goes to her husband and daughter. “What we do isn’t the important thing; we can just sit at home and be perfectly content,” Cheryl comments. “What is important is that David and Jordan know how much I love them; how important they are to me.”

Jackie Smith, who wants to start a family soon, is impressed with Cheryl’s ability to juggle her personal and professional lives so adeptly. “As an old-fashioned girl,” Jackie explains, “it’s important to me to know that my cozy home is there for me to retreat to after a hard day. I’m not one for parties. Dennis and I (her husband is actor Dennis Cole), love quiet times together.” The Coles would be glad to have their “quiet times” altered by the joyful noise of children, though, and Jackie is confident that she’ll then be able to provide the nurturing she feels every tot needs. “I plan on being a very involved mother,” Jackie smiles. “It’s terrific to have some help, but I want my children to know they can always come to their mother.”

Kate Jackson and her new husband Andrew Stevens are a bit more reluctant to make their views on possible parenting clear, but a few years back Kate said that she would probably let her career ride for a bit when her children were young. “I know I seem very carefree and very much of an independent career woman, but there’s a part of me that would like the experience of being home with my husband and children.” Kate revealed. The 31-year-old star, who married 25-year-old Andy Stevens in a surprise ceremony last summer, had had many love relationships in the past—Edward Albert, Jr. and Nick Nolte were two of her loves—but she told friends she had never met anyone as much like herself as Andy. Both present very sophisticated facades to the world, but are more old-fashioned than swinging. Andy is just the sort of man Kate would have dreamed of to father her children. Now the couple can look forward to just that!

Jackie, Kate and Cheryl had helped each other numerous times on the Angels set, and through their professional relationships have come to be true friends. As all prepare for large families, they look forward to double pleasure—their own children, growing up happy and healthy; and a group of ready-made friends for these children—the Angels’ offspring!