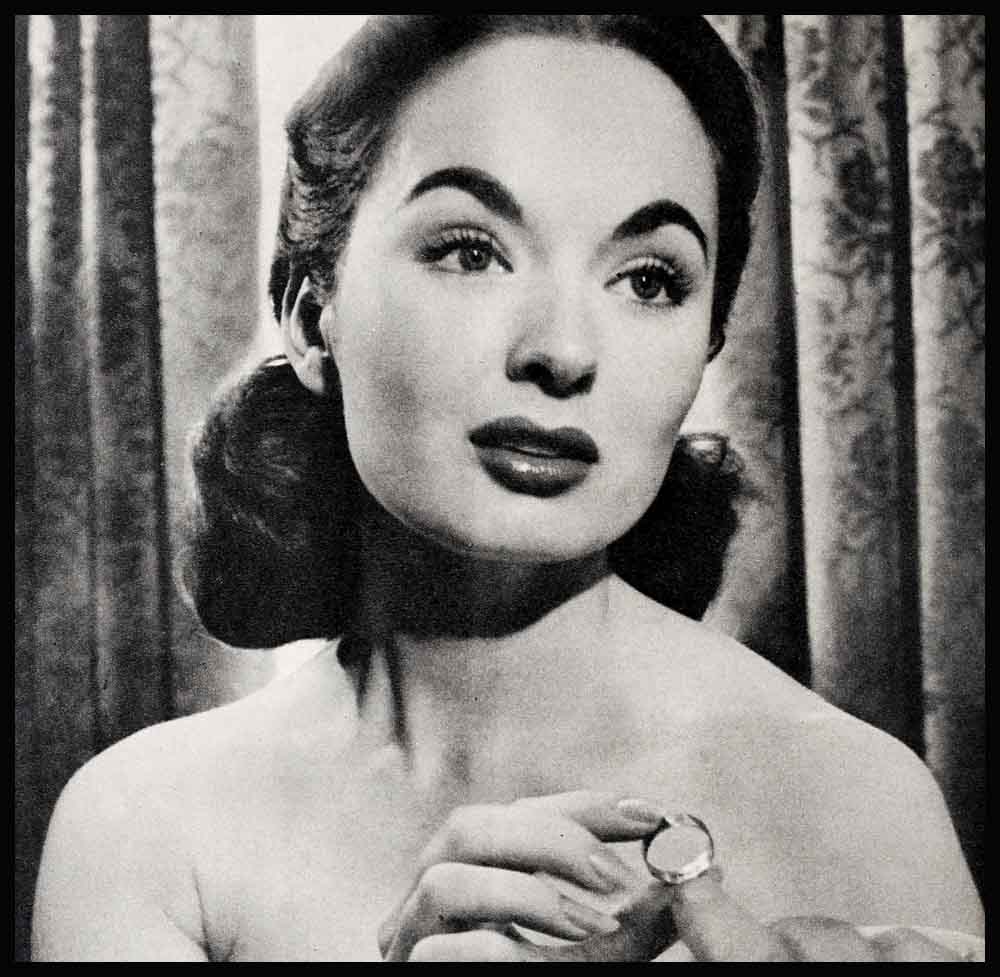 Ann Blyth Bride Of The Year

June 27, 1953, is The Day—the day Ann Blyth will walk down the aisle of St. Charles Church to become the bride of Dr. James McNulty. Ann will be given in marriage by her Uncle Pat Tobin, and the dazzling list of her bridesmaids reads like an all-star movie cast. These attendants will be Jane Powell, Jeanne Crain, Jane Withers, Joan Leslie, Betty Lynn and Ann’s stand-in (though not on this very special occasion), Alice Kraysiva. Dr. McNulty’s best man will be his brother, Dennis Day. And all members of both families will be there.

Like all young lovers, Ann and her Dr. Jim were faced with the problem of where to live after their marriage. The day after they became engaged they started their house-hunting, and—unlike many young lovers—they found their dream house with a “For Sale” sign in the front yard! It’s in the Toluca Lake district near Hollywood, and they purchased it immediately. Ann’s home-to-be is a Connecticut-farmhouse type, exactly the dream house she has always wanted. In fact, Ann laughs, the house is so perfect they will not even have to repaper or repaint a single room in it.

Afternoons these days—and mornings too when Ann hasn’t been busy at M-G-M for her role in “All the Brothers Were Valiant”—shoppers have been running into Ann as she gathered together her linens and other items for her trousseau. Like any other June bride, Ann knows exactly what she wants, but her plans for her trousseau didn’t crystalize until after Dr. Jim’s proposal last December. And in the months since then, Ann has found—again like many another young bride—that the demands of her work have cut heavily into the time she’d hoped to be shopping and planning for her future.

But no matter how rushed Ann may be, Helen Rose, one of Hollywood’s most talented designers, has made sure that Ann will be one of filmtown’s loveliest brides. For Miss Rose has created for her a wedding dress, bridesmaids’ gowns and accessories that would make any bride-to-be long for the day.

Ann’s gown, in satin overlaid with mousseline de soie, has a long bodice with lace yoke and a full, full skirt. On her hair, she will wear a heart-shaped lace cap, pearl trimmed, from which cascades a veil of illusion net. Long, white, lace gloves and a bouquet of lilies of the valley will complete the lovely bridal picture. For the bridesmaids, Miss Rose has designed dresses in the most heavenly shades of delphinium blue with ballerina length skirts. Each girl will carry a muff of fresh delphiniums.

The wedding date of June 27 is a happy compromise for Ann, one which will enable her to fulfill her lifetime dream of being a June bride and also will enable her doctor groom to take the least busy two weeks off from his practice for a honeymoon. Where the bride and groom will honeymoon has been a carefully guarded secret; even to her closest friends Ann has declined to reveal their destination.

After they return from their honeymoon, when Ann and Dr. Jim settle down in their Toluca Lake home, she intends to go back to her career; a new picture is slated for her at M-G-M in the early fail. As for Dr. McNulty, he’ll be right back at work, too, for he is one of the most prominent young obstetricians in Hollywood.

Children? Yes, of course—Ann beams in delight at the thought and admits to hoping for a big, big family of ten or twelve youngsters. The prospect pleases her enormously, and her big desire is for a houseful of happy children, particularly in view of her own lonely girlhood as an only child. Besides, Ann realizes that the life of a doctor’s wife can be a lonely one as she sits at home while her husband is at work, and often on call twenty-four hours a day, and Ann wants a big family around her for that reason too.

There may have been bigger and splashier weddings in Hollywood history, but certainly none has had warmer approval than this one, which joins two people whose love is so inspiring to watch.

Ann, ever since her days as a youngster in Hollywood, has been a favorite with everyone. Her friends, her co-workers, all those who know her, join with her many screen fans in best wishes for the happiest days of her life.