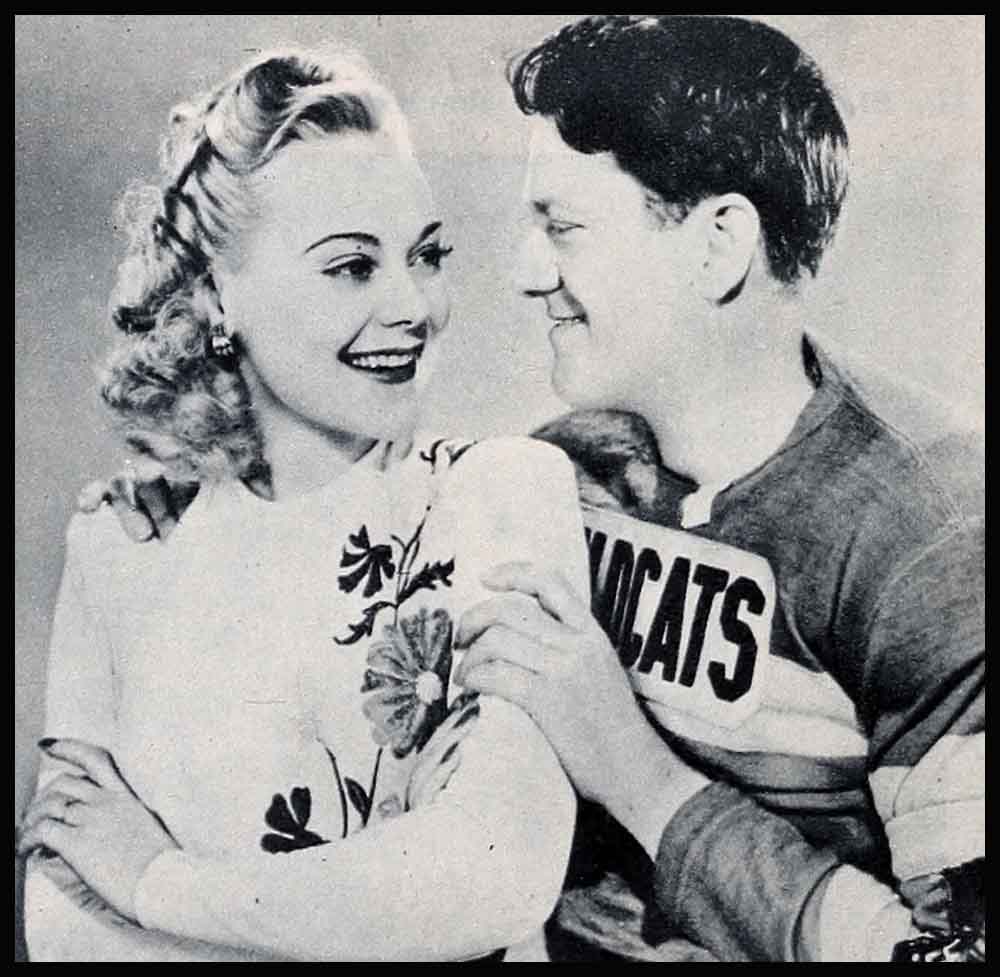 Ladies and gentlemen, we have in this corner . . .

Well, at different times we have different contenders; professional rivals, personalities who do not, for one reason or another, click with each other, even the major studios themselves. Metro and Warner Brothers, for instance, have for a long time gazed upon one another’s achievements with the greenest eyes and eternally have it in mind to outshine one another.

The strangest events and circumstances cali for boxing gloves sometimes. With Sonja Henie and Michael O’Shea it was a love scene, of all things. . . .

Sonja is a careful, methodical business woman, and nobody knows better than she that she must be photographed from very defined angles, with her head, her hair, her lashes just so.

She and the big boss of the new International Pictures, the witty Bill Goetz for whom she made “It’s A Pleasure,” get along blissfully. But the immediate producer of “It’s A Pleasure” was David Lewis. David and Sonja did not mix like Scotch and soda, but more like gasoline and fire. Continual bouts were going on between them when Mr. O’Shea wandered into the ring as Sonja’s leading man.

When Sonja gave Mike barely a nod, he burned. The chances are good that Sonja had no thought of snubbing him. Business is just that with her and she hasn’t troubled to make any of her leading men feel important since the days when she fell in love with one of them—the handsome Tyrone Power.

Came their first love scene. Once again, what happened was probably innocent. But somehow or other, in kissing Sonja, Mike succeeded in nearly throwing her off balance. His face got beautifully into camera range but Sonja’s was knocked galley-west and her hair and temper were royally rumpled. The temperatures fell below the freezing mark and for one solid week, except for actual lines in the script, Henie and O’Shea never addressed to one another so much as a single word. The glances exchanged between them were hard enough to pave a road, however.

They’ve made it up ostensibly. But don’t think Henie has forgotten.

There also are times when what started out to be a fine friendship is the cause of it all. Originally, Alan Ladd and Bill Bendix were pals. They had much in common. Their lives had run parallel. For years Alan had kicked around Hollywood, getting nowhere. Simultaneously, Bill had been kicking around New York, even had been on relief. They met just as both hit the up-curve and signed their original Paramount contracts.

Bill had nothing but gratitude toward everybody at this time; gratitude toward films for recognizing his talent and helping him out of his hitherto wretched existence, gratitude for his wife Tess who had stood so loyally by him, gratitude toward Sue and Alan Ladd, his neighbors, who put in so many enthusiastic words for him at the studio. They were very close, the Ladds and the Bendixes. When Alan went into service he worried less about Susie because he had Bill’s word that he would stand by when the baby was born.

Unfortunately perhaps for the Ladd-Bendix friendship, Bill’s contract ran only for a short period while Alan’s was of long duration. When Bill’s contract came up for renewal he was given a whopping big raise and the right to make outside pictures. Alan of course was in the Army by this time. Even after he was released from the armed forces, however, his old contract remained in force due to the W.L.B. And it offered only moderate raises. (In “And Now Tomorrow” Alan made $12,000 to Loretta Young’s $75,000.) Bill, on the other hand, was earning thousands a week and living in a Virtual mansion in Beverly Hills.

No one really knows what caused the Ladd-Bendix break-up. But everybody accepts the fact that it is just that. Alan’s and Bill’s antagonism for one another is so intense these days that when both were cast in “Ten Years Before The Mast” the wily Brian Donlevy, also in the picture, was heard to remark that he ought to be able to steal the glory while the co-stars concentrated on outsmarting one another.

Also, much as this break-up is to be regretted, Hollywood had to smile when, shortly after Alana Ladd was born, the Bendixes put in an application at an adoption center.

Then there is the funny incident that Olivia de Havilland tells on herself and the not-too-friendly rivalry that existed between her and Ida Lupino during the shooting of “Devotion.”

Olivia doesn’t tell this part of it—that Ida is apt to row with somebody in almost every picture in which she works. Nobody takes it too seriously, recognizing it as part of the Lupino temperament, the same kind of nervous exhaustion that makes her insist that her father is taking part in every interview she ever gives out. Papa Lupino has been dead for some years, but Ida will stop midway in some press statement, look at an empty chair and say, “Yes, Stanley?” She will listen intently to no sound audible to the others present and then turn to the dazed writer, remarking, “Stanley says—” and proceed to report the unheard conversation.

According to Olivia’s story, having rowed through most of “Devotion,” she and Ida decided to patch things up over a cup of coffee at The Players. So thither they repaired and as they were sipping this dish of peace, a gentleman in the next booth smiled at Olivia and came over to their booth saying, “Introduce me to Miss Lupino, will you?”

Now Olivia was at that moment in that horror state everyone has been in sometime. She knew perfectly well that she knew the gentleman, but for the life of her she couldn’t recall his name. She said quickly, “Ida, you two must know each other,” and the gentleman sat down beside them saying, “I thought you two were feuding?”

Olivia, ill-at-ease enough by this time, murmured, “Oh, that’s nonsense. If you want to see a feud you should see Bette Davis and Miriam Hopkins on another set in ‘Old Acquaintance.’’ But then, you can’t blame them. They’ve got such a terrible script it’s enough to drive anyone crazy.”

“Really?” said the gentleman, “I didn’t think it was so bad when I wrote it.”

It was at that sickening moment that Olivia recognized their companion as no less than John Van Druten, the author of Broadway’s two greatest hits this season: “The Voice Of The Turtle” and “Mama’s Bank Account.”

Actually, bouts are much in the Hollywood tradition. The fight enjoyed—and we do mean enjoyed—years ago by Gloria Swanson and Pola Negri is famous. It was not the silent variety. They fought in the front office, in their dressing rooms and in the interviews they gave—oh, so lavishly—to the press. Life went on at the Paramount studios in the Swanson-Negri days. Their rivalry undoubtedly cost thousands of dollars and altered the courses of several lives. When two celebrities as emotional and determined as les Swanson and Negri square off anything can happen—and did!

There was, you may remember, Claudette Colbert and Miriam Hopkins. Ernst Lubitsch needled these girls into making a hair-pulling scene the real thing. He wanted an exciting scene. However, their personal fight didn’t end when the cameras stopped turning.

Even Hollywood’s younger generation has contributed to the fighting legends. During all the years that Shirley Temple and Jane Withers starred in pictures for Twentieth Century-Fox it was deemed advisable—to say the least—to have them work at separate studios—Jane on the Fox Western Avenue lot and Shirley at the Beverly Hills studio.

The Temple-Withers fracas began, literally and figuratively, when Jane—then an unknown—slapped Shirley across the face. The script called for this and it might have been forgiven if the critics hadn’t found Janie’s brattish antics amusing and the studio hadn’t signed her to a handsome contract.

Also, not long ago—even though Shirley and Jane are young ladies now and not really rivals any more—when a photographer discovered them dating at the same place and asked them to pose together both girls ran off, presumably to powder their noses but really to telephone their respective mothers.

The picture never was taken.

Jeanne Crain and June Haver aren’t friends any more. They’re silent about it, however. Perfect ladies, in fact! They take good care their eyes do not meet as they pass one another on the Twentieth Century-Fox lot. That they will ever appear in another picture together is most unlikely.

Everything was fine until the girls clicked in their first film, “Home In Indiana.” The studio, delighted and impressed and in sore need of new stars since Gene Tierney, Brenda Marshall and Maureen O’Hara were occupied having babies, decided to give Jeanne and June a build-up.

First of all, Jeanne and June were sent out on a personal appearance tour throughout the Middle West. All the arrangements made for them entailed the greatest luxury and care.

However, things did not go well. It might have been a happier tour had the girls traveled alone. Their mothers, who served as chaperones, also acted, in the parlance of the ring, as seconds. At last there was nothing to do but split up the tour and send the girls to different cities.

Time didn’t help matters any, either. It wasn’t long before everybody knew Jeanne and June were out-and-out rivals. Though they may avoid one another’s eyes, rest assured each is always well aware of what the other is doing. Each, in tum, is grimly determined not to be outdistanced by the other.

In all other respects, we hasten to add, Jeanne and June are as sweet as spun-sugar angels. There is no end to the way they work and study and co-operate with any and all who are assigned to work with them.

Another pair who never speak as they pass by, who never see one another, even when they’re face-to-face in the same room, are Betty Hutton and June Allyson. This is a situation of long standing. It all began back on the Broadway stage when June landed the job of understudy for Betty in the musical show, “Panama Hattie.”

Both girls were young and ambitious and determined to make their appearance in this hit count in their careers. They succeeded. Hollywood beckoned both of them. Whereupon—you know how things grow in Hollywood—their rivalry flourished like the old green bay tree.

At first, no doubt about it, Betty had everything her own way. Then, slowly, the demure-appearing June began hitting her stride. Now, with time, it’s even possible June will out-point the gay and lusty Betty. Which would be strictly poison to Betty’s ego.

That Betty and June haven’t squared off, even verbally, up to this writing is attributable to the fact that they work for different studios and are not, consequently, contenders for the same director, dressing room, publicity representative or anything of the kind. Also to the fact that they are so very careful not to see each other—ever!

Certainly the stars have their troubles. And more often than not they are other stars.