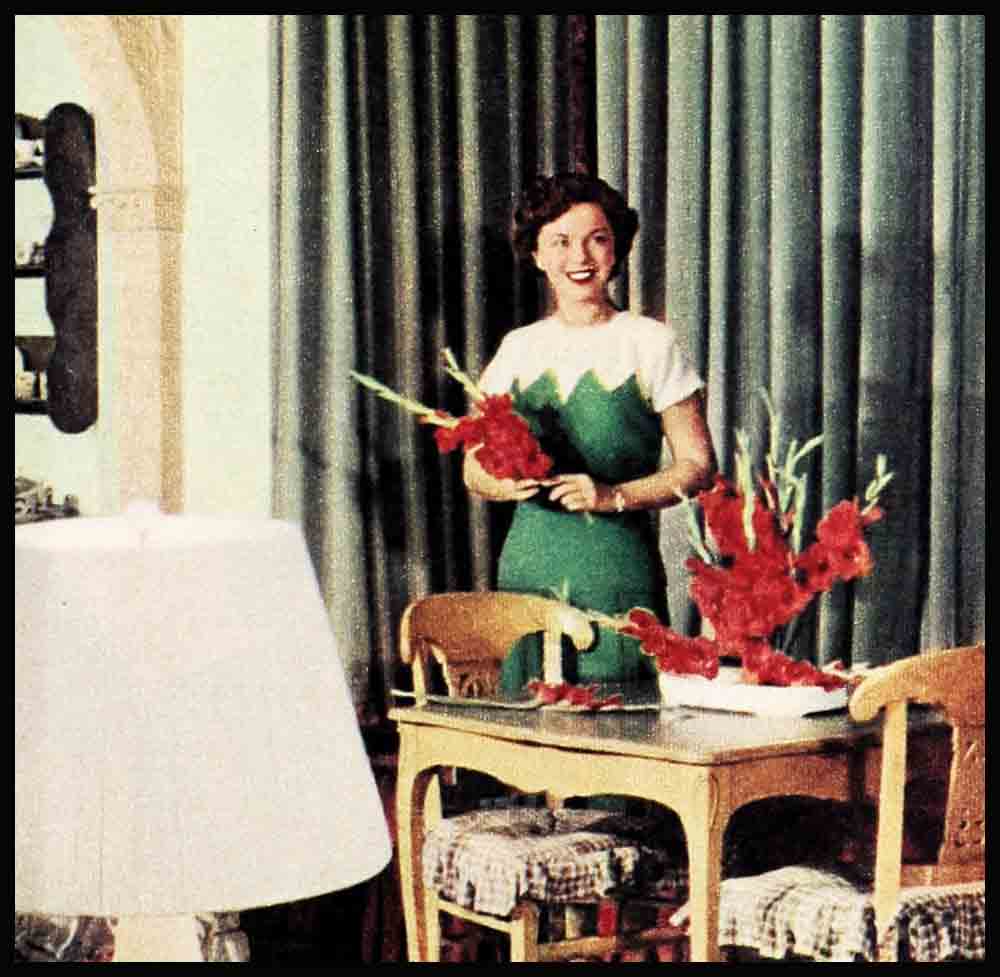 The House That Grew Up

Shirley Temple’s home has been remodeled and decorated so delightfully that it is hard to believe it was the playhouse built for her when she was a little girl. Styled after an English cottage, it stands in the grounds of her parents’ home, half hidden by the trees and shrubs which give it the air of having grown in its setting like something out of a fairy tale. Located on a steep slope, it is built on two levels, the top floor—where you enter from a curving, tree-shadowed drive—and the lower floor built against the hillside and overlooking the garden.

Formerly, the upper floor housed Shirley’s little theater. There was a stage with dressing rooms beyond, as well as bath and kitchen. In remodeling, the stage was removed and the dressing room area transformed into a room and bath for Shirley as well as an adorable nursery for little Linda Susan, with its own bath. The kitchen remains, but all this leaves a very large area for her living room.

Actually it is difficult to decorate such a large room without having it look like a hotel lobby, with groups of chairs and tables scattered around. But Shirley’s room is not at all like this.

For this living room area, she arranged furniture around the fireplace, delightfully situated in an alcove, and flanked on either side with built-in benches, topped with red cushions and framed with hand-carved beams. She then continued the living room area in a U-arrangement of two chairs and sofas facing a bank of windows. In front of one window, which has comfortable built-in seats, she put a permanent card table, flanked by two chairs. “This is my breakfast room,” she said. The dining room is at the end where the stage used to be, and near the kitchen.

So far, we’ve accounted for about two-thirds of the room. The remaining third takes care of the library and music for, on either side of the front entrance, bookshelves line the walls. At the left stands a grand piano and on the right, framed by bookshelves, is Shirley’s television-radio-phonograph combination. Two comfortable lounge chairs with their backs to the living-room group face the television, showing how one room can take care of many functions and be pleasing whether many persons are in it, or only one or two.

The whole trick lies in the placement of the furniture. A massive gray-textured sofa acts as a partition as it faces the fireplace, its back to the center of the room. The U-shaped arrangement faces inward, ignoring the rest of the room, and the backs of these various pieces set the dining-room furniture apart. One of the sofas in the window-section group backs up to the grand piano, isolating it. The chairs facing the fireplace and those for television back up to one another.

You can apply the same principle to your home. If it follows today’s trend of combining living room and dining room, let your sofa be the divider. Should your living room get a lot of traffic along one wall, separate this area from the rest of the room with a pair of chairs placed on either side of a lamp table. Low bookcases also can act as a movable partition if you make their backs attractive with strips of bamboo, paint, wallpaper or even fabric.

Shirley studied decorating at school. She has good taste and knows what she wants. Before she married Charles Black she worked with decorator Mildred Moore to achieve the colorful, informal, gracious home she had in mind. She picked out one patterned fabric—a charming glazed chintz combining red, green and white on a gray ground—and then used these colors for the room’s entire scheme. Whenever a chair seemed to call for a print she used this same one. You might jot down this decorating hint: The best way to avoid the confusion that mixed prints sometimes give, is to use only one in a room, contrasted with plain colors.

Whenever you repeat a pattern several times, though, be sure to scatter it around the room. Balance it, as Shirley did. She put the glazed chintz on the two sofas and chairs that formed the U-shape and then repeated it in two of the chairs across the room, that flanked the fireplace. If you choose patterned fabric for draperies and for a chair or two, separate these chairs from the draperies, using chairs with plain covers to stand near the windows.

Walls, rugs and draperies in Shirley’s room repeat the green, the large sofa’s gray and the red is picked up in the drapery trim, bench pads and pillows and on the two lounge chairs in the music area. A small check combining red, green and white, is used to upholster the host chairs in the dining group and is used on pads for the side chairs.

A large room needs a high ceiling, of course, and Shirley’s ceiling is all paneled and beamed with beautiful hand-carved supports. Its finish, though, defies description, having been bleached and waxed by an elderly German and his sons who take pride in their craftsmanship.

The entrance hall, however, has a low ceiling because, just above it, is the projection room, part of the original arrangement. Movies, projected through a wall panel, shine onto the dining room wall. For these occasions, Shirley removes the four fruit prints which hang there. Even these tie in with the room, their mats being made of the same red fabric as is used on window seats and benches.

The entrance hall is keyed to the living room in color, having green wainscoting and wallpaper bearing figures of a dandy in red and green, holding green lovebirds. Stairs at right lead up to the projection room and another flight goes downstairs. Also off the entrance hall is a powder room. This is as feminine as Shirley could make it. The rug is maroon, the dressing table wears a pink taffeta skirt and the wallpaper is pink, patterned with a fan-and-glove design in blue. The blue is also picked up in the small loveseat.

In her bedroom, Shirley has kept her color scheme very simple, yellow and green, keyed by a vibrant glazed floral chintz. This one lovely pattern she uses for draperies and cornices, chairs and chaise longue. But the French Provincial bed has a yellow and green check for both its headboard and spread. Pale yellow walls and ceiling blend with the chenille rug.

Little Linda Susan’s room, next to her Mommie’s, has a small white crib beside the wall. Everything’s blue or white, with the exception of the pink roses with green leaves that besprinkle the ceiling. Narrow blue and white striped paper covers the walls and the blue is repeated in the rug and in the studio couch cover. White’s reserved for the woodwork and chifforobe.

On the lower level, Shirley made few changes, except to substitute a soda fountain bar for the old pint-sized bowling alley. The bar stands at the foot of the stairs. Here, too, stands a junior table accompanied by two leather-topped benches and a star-studded red love seat. From this small room, you descend two steps into what was originally the doll room.

Shirley’s collection totals fifteen hundred dolls. They are there still, but Shirley now has in front of their shelves, doors covered with scenic tropical wallpaper panels. When the doors are closed, you’d never dream of all the space behind them.

Both of the downstairs rooms are floored with asphalt tile, which takes a fine waxing and can’t be beaten for dancing. To keep it strictly informal Shirley chose rattan furniture with turquoise cushions.

From the little soda fountain room, a door leads on to a wide, covered flagstone porch and beyond this the ground slopes sharply away forming a ravine. The sides are planted with shrubs and trees, so that although you hear the swish of traffic on Sunset Boulevard, all you can see is greenery, and you seem miles away from town.

Shirley’s grown up and her house has, too.