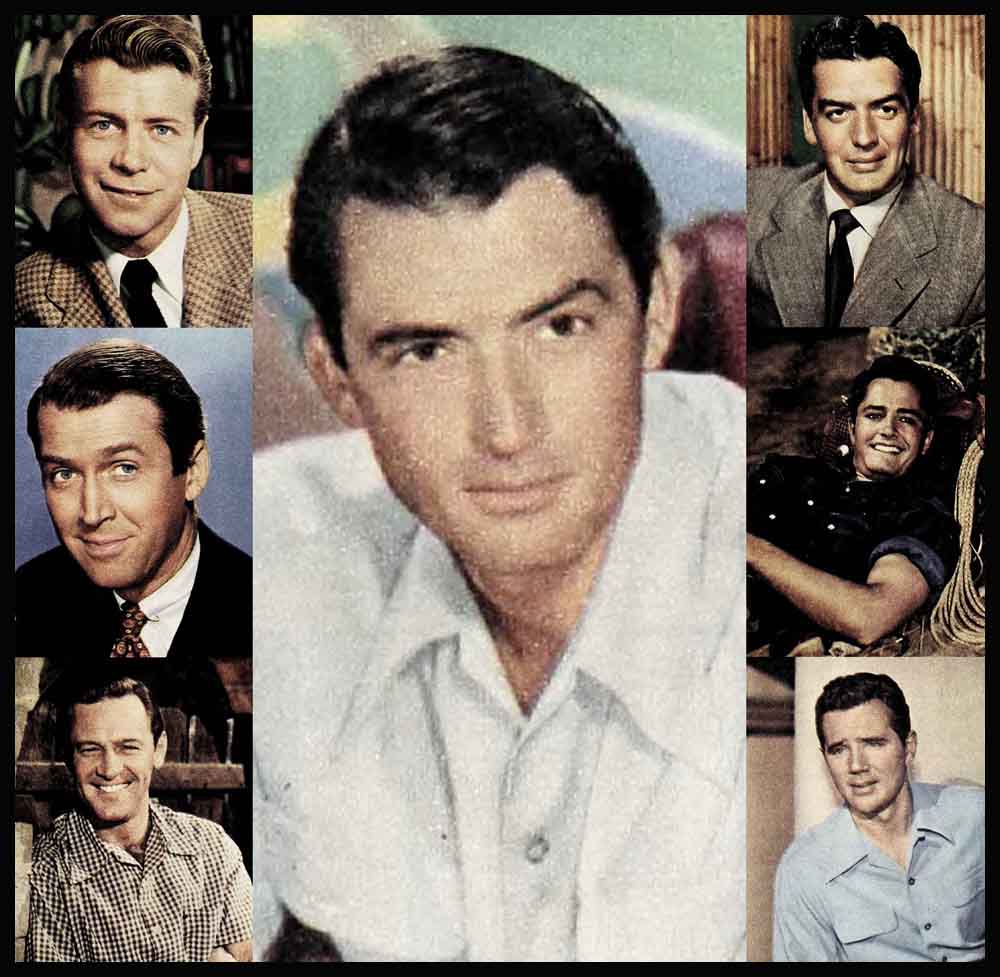 Everything is fine. You’re in love. He calls you every night. He sees you at least three times a week—a midweek movie date, a heavy date on Saturday night and Sunday with the family. Not to mention the fact that all your friends take it for granted that you’re practically engaged and invite you to parties as a couple.

And then he isn’t so interested. It doesn’t happen suddenly. There isn’t any big fight or anything. But he just doesn’t call every evening. He’s busy over the weekend and the excuse is lame. What went wrong? Or you’ve been married a couple of years. It was wonderful in the beginning. And then—oh, it isn’t what he says or does. It’s an attitude. You know you’ve lost him. But why?

With thousands of girls trying to find an answer to this question we asked ten movie stars for an opinion. Their answers offer an excellent idea of the things that make men burn. If you’ve lost your fellow of course you want to know how and why. If you haven’t lost your fellow better read what these men have to say and beware of romantic pitfalls.

Howard Duff said: “A girl loses a man when she shows signs of taking over. All of a sudden you find your life is being run for you. Most men start to run when this happens. Lots of times you make an arrangement to go one place and as soon as you get there she wants to go somewhere else. So the evening is spent in the car, driving from place to place.

“A girl putting on lipstick or even combing her hair at the table doesn’t bother me, but what does is the girl who is never quite with you. You take a girl to Ciro’s or some place like that and she’s always looking around to see whom she can see—and waving at people. It shows me she’s not interested in me.”

Howard Keel is annoyed by small things. He can’t stand, for example, “A woman who smokes on the street. I don’t like to be with a girl who opens doors for herself or does any of the things a man should do for her.

“Since I’m not much of a talker myself I like a girl to talk a lot. But women who are late and keep you waiting—oh no! When a woman is unattractive and lets her appearance go, she loses her man. There is an old and very wise saying, ‘A man never leaves a good wife.’ ”

Keefe Brasselle did not have to stop to think when questioned. Typical of the fiery Keefe, he just spilled it. “Girls lose men when they stop being attentive. I always try to do pleasant things for girls. For example, I don’t smoke but I carry a lighter. I always open doors for them—you know, small attentions. Girls should be just as attentive. When girls become blase—as so many girls do after they think they’ve hooked the guy—they lose him.”

Victor Mature yelled, “I’d like to meet the woman who ever lost a guy—or anything else—she really wanted. The trouble is that women get a guy and he’s the early-home type. That she likes! Then she starts wanting him to stay up all hours. In other words, women want to change the guy all around and after they have mangled him and changed him they don’t like the jerk any more. So the moral of the story is—so far as men are concerned—stay as repulsive as you are.”

Jeff Chandler smiled. “The one thing that gets me off a girl is when she does my thinking for me, tells me what’s going on in my mind, when she tries to read my thoughts and is usually wrong. I need intellectual independence and a private room in my soul where I am my own man.”

John Derek believes that a girl loses a man when, “She laughs at everything you say or accepts everything you say as gospel truth, when she’s too obliging . . . you can’t be that wonderful. Talking too much is more dangerous than not talking enough. What so many girls don’t realize is that boys are more shy than they are—particularly when they’re very young. I was always worried for fear the evening’s entertainment wasn’t going to be just right. Girls should realize boys have problems, too. So many girls just sit back with the attitude, ‘It’s your job to keep me happy.’ And they let the guy carry the ball because he made the date.”

Gene Nelson is one of the most articulate young men in Hollywood and his answer proves it. “Girls lose men when they start hanging on too tight. Jealousy can cause them to hold romance too close and not let anything else in. Remember ‘Apartment for Peggy’? In that picture Jeanne Crain and Bill Holden were talking about money. She said, ‘Hold this fifty-cent piece in front of your eye and what do you see?’ ‘I see a fifty-cent piece,’ he said. But when he held it at arm’s length he could see the whole room, too. She said, ‘Never hold money so close you can’t see anything else.’ This goes for romance. Never hold love so close you can’t get air around it. There is room for other things besides romance, things you do together that broaden the scope of romance.”

Gregory Peck waxed philosophic when he said, “Girls lose men when they lose sincere, honest concern for their welfare, feelings and happiness. Men and women become interested in one another first and fall in love second. When interest dies in one or the other then love loses its foundation.”

William Holden was very definite. Said he, “A girl loses a man when she doesn’t take her own responsibilities. The home is her department, yet I’ve heard locker-room talk where the guy says, ‘I came home last night and my wife was crazy. The kids had poured red paint on the cat’s back.’ It seems to me this is her department and she should cope with it. It certainly isn’t what the guy wants to hear. He wants everything pleasant.”

And that’s why girls lose men, according to ten bright Hollywood stars.

Howard Duff is in “The Cave,” Howard Keel in “Showboat,” Keefe Brasselle in “The Bradley Masen Story,” Vic Mature in “The Miami Story,” James Stewart in “The Greatest Show on Earth” and “No Highway,” Jeff Chandler in “Smuggler’s Island,” John Derek in “Saturday’s Hero,” Gene Nelson in “Lullaby of Broadway,” Greg Peck in “Only the Valiant,” Bill Holden in “Submarine Command.”