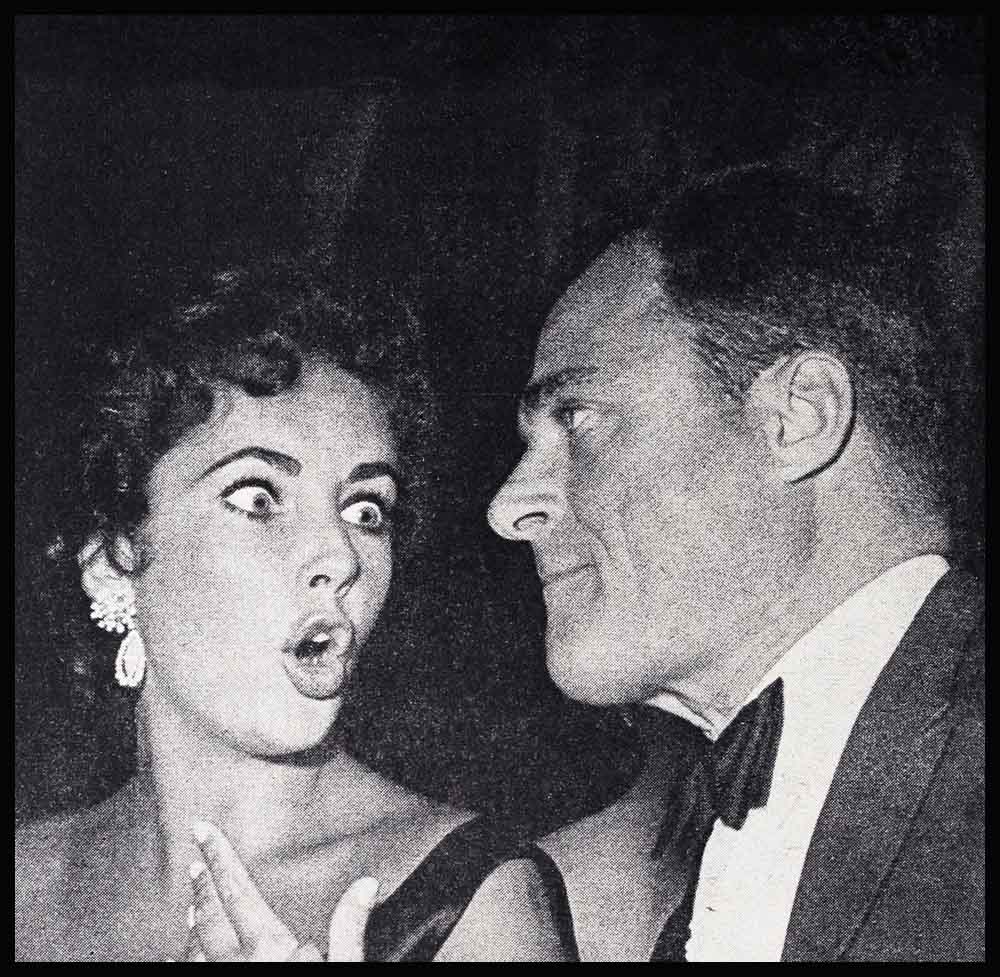 Diamond Liz: On exhibit in a fashionable gallery in London is a painting of Elizabeth Taylor holding one of her babies in her arms. This look into the past was painted by Marjorie Wilding, her ex-sister-in-law. Meanwhile, Liz herself is living very much in the present and future. Happy in the expectation of producing a new family for Mike Todd, in the fail, she recently dazzled a plush gathering of New York society folks with a tremendous diamond clip on her dress, diamond earrings and a diamond flower clip in her hair, all in addition to the big rock on her finger, of course. By the way, Liz was named best-dressed woman of the screen by the Fashion Foundation of America.

Rumor Time: When we talked to Hope Lange in New York and recommended a doctor for her to see in Hollywood. just before her baby was born, we took the opportunity to check the rumor that she would go housewife-and-mother after young Murray checked in, neglecting her acting career. It’s not true. The eight-pound boy arrived at Cedars of Lebanon Hospital and Mrs. Don Murray immediately began talking to her bosses at 20th Century-Fox about a part in “Peyton Place.” Don, of course, just finished making “A Hatful of Rain.” . . . Because Natalie Wood and Bob Wagner keep being seen around together, the talk persists that this is a big romantic thing. It’s not. These two kids have somewhat similar problems—Nat’s tussles with the press and others about her flittings from date to date, and Bob’s frank admission that he considers his career is in a rut—and they find a great deal of consolation in being able to talk to each other about them. Basically sensible, both of them, they can really help each other . . .

Talk is that June Allyson has promised Dick Powell to seek professional help for her emotional mix-ups. Dick would really like to work out their problems. . . . John Kerr and his Priscilla have been finding it hard to determine on which Coast they ought to settle. Having finished “The Vintage,” John was considering possibilities on Broadway and in New York television as well as Hollywood. But they have bought a house in the movie Capital, and television work from that end of the coaxial cable is what he will be doing most for the next few months. . . . George Nader can’t make up his mind, still dates both the beauteous Dani Crayne and the beauteous Martha Hyer . . . Cornell Borchers is newly a Hollywood resident, now looking for a house with enough privacy to permit sunbathing au naturel. It’s just something that Miss Borchers likes to do.

Life in Hollywood: Dusty Bartlett is the girl Jeff Hunter has been seeing most while recovering from his marital bust-up. Ask Dusty how she got her name and she will explain that it derives from her days as a Girl Scout, when she liked to roll down hills. . . . Nick Adams, though you may find it hard to believe, had to lose over twenty pounds for his role in “No Time for Sergeants.” If you’re on the lookout for a Hollywood-type diet, here is Nick’s: Steak and tomatoes! . . . The tough and realistic school of acting is not so easy on its adherents, either. Paul Newman. after some rough and tumble roles in television, made “Somebody Up There Likes Me,” with all its battles, and has been tagged as the prizefighter type ever since. Even in “The Helen Morgan Story” he has to take a few punches in defense of Ann Blyth’s honor, in a night-club brawl, and in “Until They Sail” he’s a soldier. His real-life girl, Joanne Woodward, thinks his next role ought to be that of a preacher. . . . In Hollywood, social storms rage over the most amazing things. Now it’s Vikki Dougan who has kicked off a tremendous to-do over her low. low-cut dress—in the back. Some say it’s poor taste, others that it’s ridiculous. But a good many can be found who, like one close friend of Miss Dougan, just shrug and say, “What did they expect? The gals had gone just about as far as they could cutting down in the front. Vikki’s idea is simply the next logical development!”

Stay-at-Homers: Marisa Pavan and Jean Pierre Aumont are determined that their baby, expected the end of July, will be born in the United States, so it will be American, as is Maria Christina, Aumont’s child with Maria Montez. After the birth of her baby, Marisa is going to concentrate on her career in Hollywood, while Aumont will tour the capitals of Europe in the play in which he is currently appearing in Paris, “Amphitryon 38.” Incidentally, Marisa and Jean Pierre, who are strict stay-at-homers, saw the new show at the Lido only because the Oliviers were in Paris. Sir Laurence and Vivien Olivier are Aumont’s best friends, and he and Marisa took them to the Lido, on one of their rare nights out. The Oliviers came to straighten out arrangements for their joint appearance on the Paris stage in May in “Titus Andronicus” for the Paris Drama Festival. . . . Speaking of Aumont, he was one of the Hollywood friends Ty Power looked up during his week in Paris. Ty also managed to see his ex-wife Annabella several times for dinner, and she and Louis Jourdan took him to his plane when he left to return to London. When Ty leaves London for Hollywood and “Witness for the Prosecution” he is lending the Louis Jourdans his London home while Jourdan makes a film there. Incidentally, although Ty is deeply devoted to his two little girls and spends as much time with them as possible, he never mentions the name of their mother, Linda Christian. It’s as if she simply does not exist for him. Ty’s interest in Swedish actress Mai Zetterling, however. is keen.

Rod and Sally: Rod Steiger didn’t miss the chance to stop off in Paris on his way to Spain for “Across the Bridge” location. Disproving that Paris is strictly a woman’s shopping town, Rod bought himself a stack of hats and a new watch. But his main activity in the French capital was hunting new paintings. An avid art fan and a skilled painter himself, Rod confesses a preference for talented unknowns. “Can’t afford masterpieces,” he says. As friends tipped him off to one after another of the city’s promising young painters, Rod. a strange sight in his black leather jacket and bright red shirt, was kept running from one to another. Rod has been busy showing the sights of Europe to his wife, Sally Gracie, as a reconciliation present. She stayed with him in Spain all through the filming. A family is the first item in their plans for a new life together.

Lucky Cannes: Wonder what will happen to the Hollywood stars who choose to attend this year’s film festival in Cannes? Something nice has happened every year to at least one. Grace found her prince. Olivia de Havilland met her Pierre Galante. Kim Novak climbed out of the starlet rank into star place as a result of the publicity received at the festival. Kim has just been named one of the most popular foreign stars in Germany. Before the festival last year, they had hardly heard of her. Incidentally, Olivia will make nine personal appearances at American Army bases in Europe this year, for which she will receive the total sum of one dollar.

No See, No Talk: Ingrid Bergman has taken to wearing costume jewelry, something she never did in Hollywood. but the exquisite emerald necklace she wears on special occasions is the real McCoy. It’s a present from Rossellini, who sent it to her from India. One of those occasions was when she danced the rumba one night in Paris’ famed Lido Club with Ernest Hemingway, who was visiting the club with his wife and saw her seated with friends. After great exclamations of joy and greeting, they took to the floor and did a fancy rumba together. One of Ingrid’s favorite anecdotes about her children concerns Robertino, seven, a student at a Paris boys’ prep school. A reporter wanted to interview the boy and thrust a microphone in front of him, Robertino glared at the mike, then said, “I refuse to speak to people I can’t see.”

Far from Home: What love will do! One of Hollywood’s most glamourous and sophisticated beauties, Susan Hayward, now calls little Carrollton, Georgia, her “main home.” What’s more, she proves it by climbing into the cab of one of her new husband’s trucks to do her housewifely shopping. This stops traffic downtown, of course, as all of Carrollton turns out to watch red-haired Mrs. Eaton Chalkley back into a parking space in front of the supermarket, just like any other Georgia housewife. . . . Our Paris correspondent reports that a chance visit to his barber, Desfosses, the swankiest in the French Capital, revealed an appalling aftermath to Yul Brynner’s visit to that city. Yul’s bald head became such a fad that the barber reported an average of half a dozen males a day getting a clean head shave. . . . John Derek was a slight puzzlement to American newsmen who met him at the London airport when he recently flew in from Hollywood for his picture, “Women of the Night.” John has always complained of the “Pretty Boy” tag and wished aloud the press would treat him in a more realistic and rugged manner, yet he wouldn’t allow himself to be photographed because he hadn’t shaved and his face was showing the effects of a rather rough flight. . . . Jose Ferrer tried to smoke a pipe between courses at the conservative Claridge’s restaurant in London—a thing which isn’t done by Englishmen who appreciate good food —and was subtly but severely reprimand by his waiter. . . . Princess Grace’s daughter will learn deep-sea fishing as soon as possible, says her fond father!