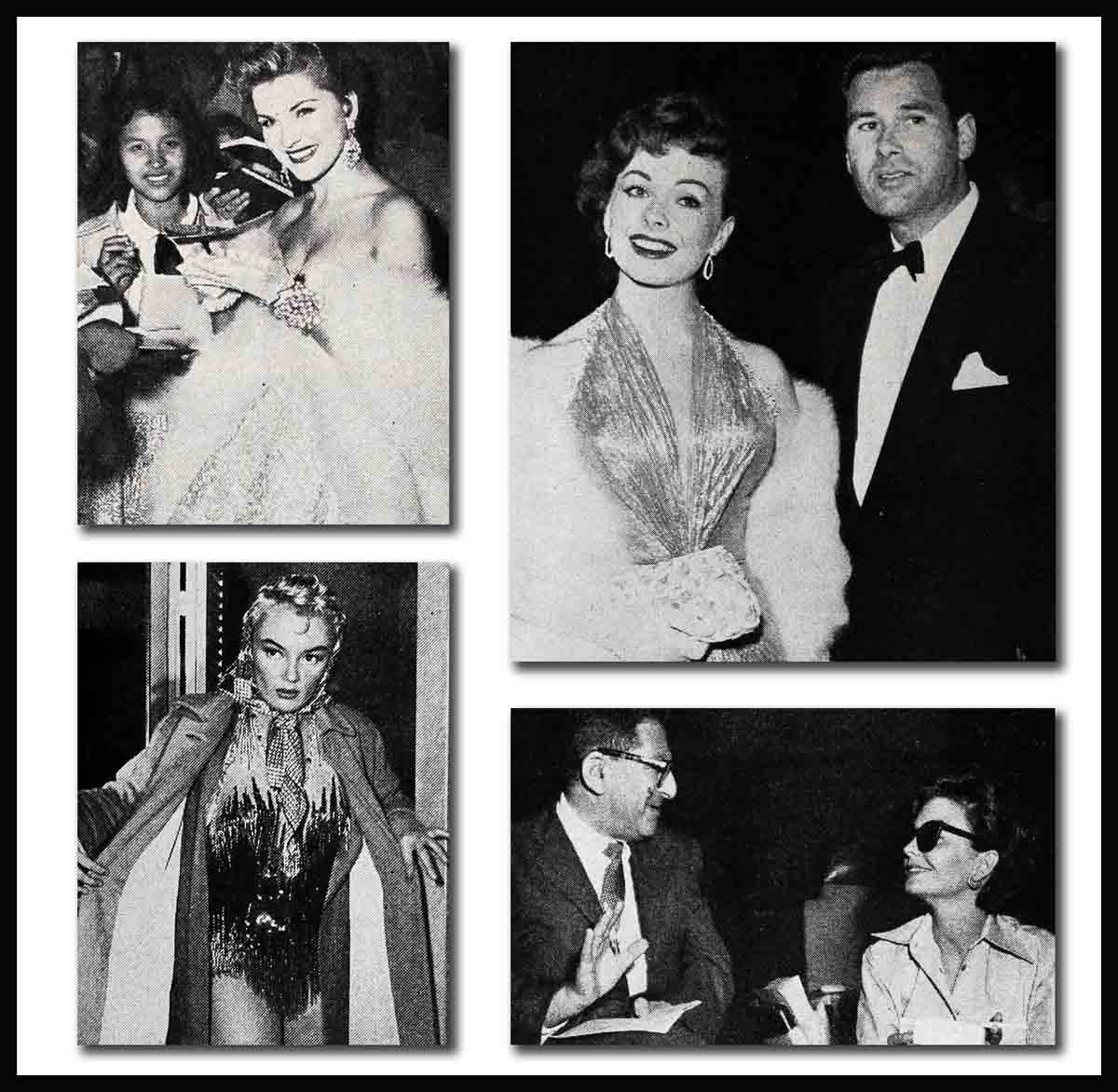 I implore Judy Garland to play Julie Jordan in the movie version of “Carousel.” It could win the Oscar for her . . . The line forms on the right for those who say they discovered Fess (Davy Crockett) Parker . . . I’m not a guy who favors divorce, but I sure wish Jimmy Stewart and June Allyson would get divorced as man and wife on the screen . . . Wonder what ever became of Gene Kelly’s movie “Invitation to the Dance”? . . . I don’t know of anyone I’d rather spend a day with on a movie set than Jean Simmons. She’s so lovely, gracious and bright that you have to pinch her to see if she’s for real. And then she doesn’t object to the pinching.

No matter when Sam Goldwyn releases “Guys and Dolls,” it’ll be a strong Academy Award contender . . . I wonder if Al Steele knows that Joan Crawford’s sets are the coldest in town. Even on winter mornings, Joan has the cooling system on. Crawford leading men frequently get the sniffles . . . Peggy King makes me believe her when she sings “Whatever Lola Wants, Lola Gets” . . . George Nader commenting on a starlet: “She’s the kind of a girl you can look at her face and ell what kind of a past she’s going to have.”

Anita Ekberg is the best hunk of cheesecake around. And don’t be fooled. Anita is as smart as she is shapely . . . Marriage hasn’t fattened up Vera-Ellen . . . I’m still waiting for the Chamber of Commerce to give Hollywood Blvd. the glamour it should have . . . Kim Novak will have to move out of the Studio Club soon . . . Ordering champagne at Ciro’s, Marie Wilson said: “Please make sure it’s French, waiter, because if it isn’t, I won’t be able to tell the difference.”

I’m for Tony Curtis and Janet Leigh and wish people would stop trying to separate them . . . Marilyn Monroe is the only glamour girl I can think of in a hurry who conceded that another glamour girl made it on ability alone . . . In Beverly Hills, every celebrity’s house is someone’s old house. Example: James Mason will tell you, “I’m living in the old Buster Keaton house.” Another star will tell you, “I’m living in the old Richard Barthelmess house.” This is not only a means of identification but also a Hollywood story . . . Okay, now let’s have Leslie Caron not as a pixie! “Love Me or Leave Me” started out to be the story of Ruth Etting, but as far as I’m concerned, it’s more the story of Moe (The Gimp) Snyder because of the terrific performance of James Cagney . . . And I’m not taking anything away from Doris Day who’s at her best, but that Cagney man is just too much . . . Which reminds me of that cat Sheree North who told me she started in show business as a chorus girl at the age of 13. “I needed the loot,” explained Sheree.

“It wasn’t hard to lie about my age because I was well-developed.” . . . The Liberace fans will probably break a candelabra when they learn that in his movie “Sincerely Yours,” the love interest has been assigned to Tab Hunter and Dorothy Malone. At a party, Debra Paget remarked: “Isn’t he handsome—that other-looking fellow.” . . . I won’t argue, but I say that Jeanne Crain looks good as a brunette . . . My favorite character Mike Curtiz directing a scene gave this instruction: “Then a whole bunch of men come in surrounded by a little fellow in the middle.” That’s Hollywood for you.

It is a quote. PHOTOPLAY MAGAZINE AUGUST 1955