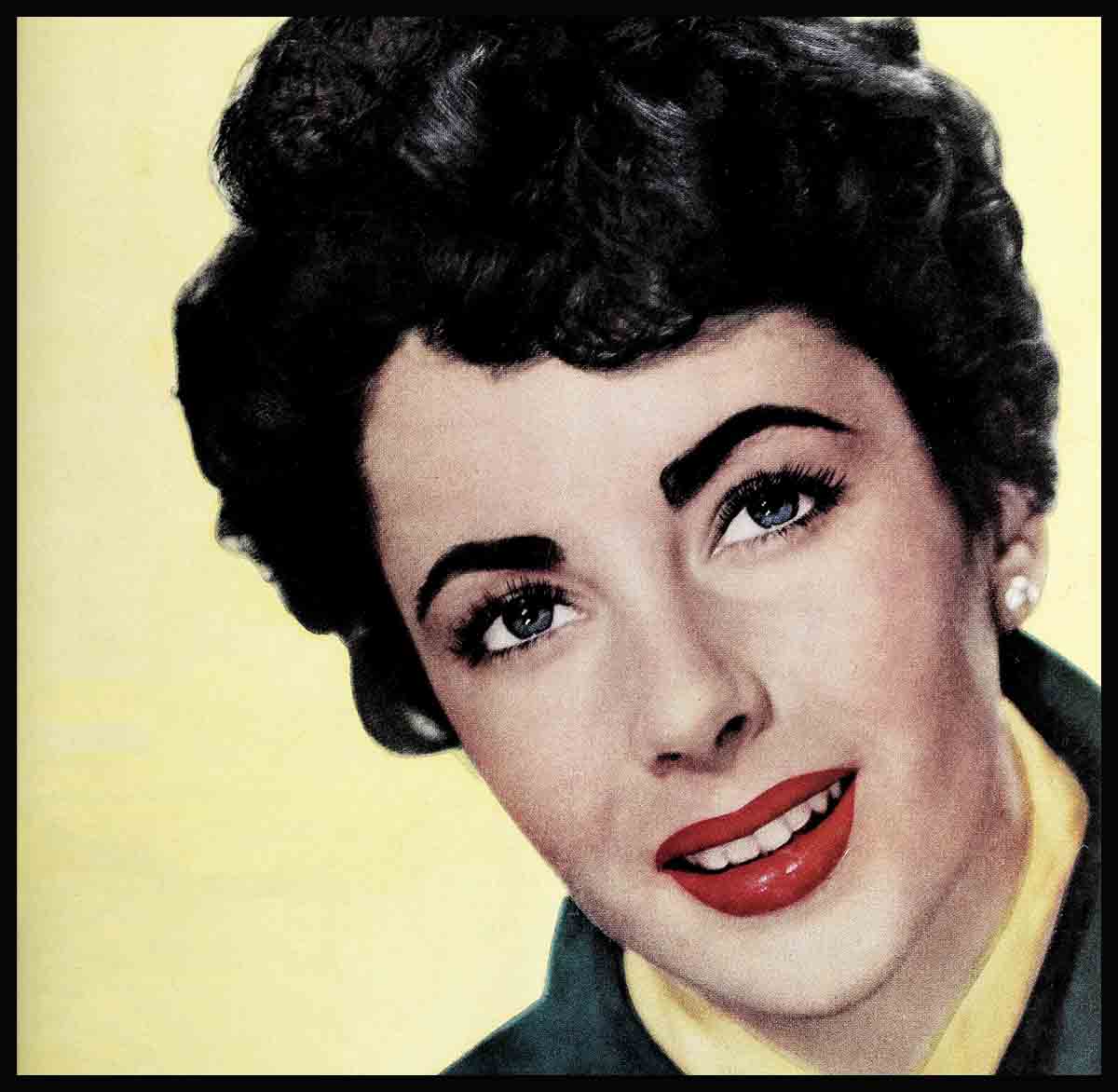 FOR THE NEXT SIX OR SEVEN MONTHS her friends and fans will refer to Elizabeth Taylor, please, as Mrs. Michael Wilding.

Before she met Michael, Liz says, she was never really satisfied with her life, with herself.

“It wasn’t anything really specific—I just wasn’t happy, never quite knowing why. I was searching for something, I didn’t know what.

“Now I know. And I have it. My love. My reason for existing.”

The beautiful young star, awaiting the birth of her first child, began a temporary retirement from the screen late in August with the completion of her role in “The Girl Who Had Everything.”

“The girl who has everything—you can say that again,” seemed to be the unanimous verdict of all the people who worked with her in the exciting five weeks just before Liz said goodbye, for a short time at least, to all of her friends and co-workers on the M-G-M lot.

For Liz, home again after an idyllic honeymoon in the Alps with her handsome British husband, Michael Wilding, was a vision to inspire even the most determinedly downhearted, dejected and dispirited souls.

Nobody in Hollywood quibbled last spring when M-G-M chose “The Girl Who Had Everything” as the title for Liz’s post-honeymoon picture. If the label would fit any girl it seemed, if you will excuse the pun, tailor-made for Taylor.

But Liz, then in England to marry her Michael, quibbled.

“It’s sort of ridiculous,” she cabled, “the title, I mean, because no one has everything.” It seemed even more ridiculous, even presumptuous, for people to couple her with the title in their thinking.

At some point, however, between her London marriage and her return to Hollywood as a radiant—and expectant—bride, Liz forgot that she was upset. A title change, after her return, was never again mentioned. Mrs. Wilding, it appeared, was much too happy to bother herself about titles.

Not that she had changed her mind.

Her “reason for existing” was first revealed to her, Liz will tell you, in the first exciting days of her marriage to Michael. Like two very happy and slightly addle-pated children, they journeyed from England to Switzerland by boat and by train to honeymoon at a professional skiers’ resort high in the Alps. She was intrigued—and mildly alarmed—to find that her handsome and maturely sophisticated bridegroom was almost as baffled as she was by the intricacies of international travel.

“One of us was always misplacing a passport or losing a suitcase,” she says. “We were always terrified that we’d miss our trains.”

And once Michael almost did.

“Bless him, he got off at a small town in Southern France to get me a glass of water. And while I watched him hurrying down the platform the train started chug-chugging off toward Italy! There I was, alone in the compartment, knowing net a single word of French . . . oooh!”

But Michael made a flying leap and re-boarded the train, without, unfortunately, the glass of water, but with his very useful knowledge of conversational French.

A series of similar miracles saw them safely to their honeymoon lodge.

There Liz found herself, found the new Elizabeth. She doesn’t ski, and Michael—who does, and well—couldn’t. His British film contract expressly forbade him to risk life or limb on the slopes. So they spent the long, sunny days on the balcony outside their suite, tanning gloriously in the ninety-degree heat while the bright sun beat down on the heavy drifts of pure white snow on the ground.

They had time in great, quiet patches to discover one another. They knew now that they were meant to be together. Their reason for existing was that they were very much in love.

A whole new way of life was opening up for Elizabeth. Feeling a security and permanence she had never known before, she had everything she wanted.

It had all been different—before she married Michael.

In the period of her vague discontent, Elizabeth recalls, she cast about anxiously for ways to change—“to improve myself.” She tried to find specific reasons for the inadequacy, the incompleteness she felt.

“Maybe it was more brains I needed,” she concedes frankly.

Perhaps her education, which amounted to high school training in Metro’s Professional school, had been insufficient. “I was by no stretch of the imagination an intellectual. To be honest, I must admit the main thing that interested me in school was the bell that rang when classes were over.

“Perhaps I should have tried to be the book-worm type. I would have loved to learn more languages . . . especially French.

“Michael knows French,” she says proudly. “He can teach me.”

With the failure of her first marriage to Nicky Hilton, her feelings of inadequacy had been intensified. . . . Perhaps she had failed somehow. Why, she couldn’t even cook, not even boil an egg.

So she determined she would learn to cook. She went so far as to buy a couple of cook books, and look into the rates of schools which teach gourmet cooking. But somehow she didn’t get around to doing anything about it. So that was that, at the time, for the cooking. But now: “Michael is a wonderful cook. He can teach me. And we’ll have fun.”

“Michael” is the magic word. It is clear that Elizabeth, having Michael, at last has everything she wants.

Michael arrived from England only a few days before Elizabeth was scheduled to start work on “The Girl Who Had Everything.” Elizabeth whisked him home to their small apartment and allowed him a brief two hours for a bath, a change of clothes, and a reunion dinner. After that —it was 10:00 p.m. in Beverly Hills—she took him house-hunting!

Elizabeth had been combing the town for a new home from the day of her own arrival from Europe a few weeks earlier. With a baby coming they must have more room, and time was running short.

“We prowled all through the streets of Beverly Hills that night,” Elizabeth re-calls, “looking at houses with ‘For Sale’ signs. It was well after midnight when we gave up. It’s a wonder the police didn’t pick us up as suspicious characters!”

Michael—not yet adjusted to the time change—was wide awake at 6:00 a.m. the next day, and continued the search while Elizabeth slept. They are determined to find just the right house—‘“new, contemporary design, all on one floor, with, of course, room for a nursery.

“And,” Elizabeth adds, “Room for a pool. Not that the pool matters immediately. There will be time enough to worry about that when our baby is old enough to learn to swim.”

All that Elizabeth’s heart desires, now that she is married to Michael and expecting his child, is to have her baby and to have a proper place to bring him—or her—home. And although neither will definitely state a preference, Elizabeth dreams more often about a daughter, with Michael thinking about a son. If the baby is a girl she is to be named Michele, if a boy he will be Michael.

The desire for a home is a simple basic desire which all young wives can understand. They understand it far better, probably, than they could understand the Liz Taylor of only a year ago, when she was a girl restless and unhappy, deeply dissatisfied with herself.

Incredible as it may seem to girls who would give anything to look exactly like Elizabeth Taylor, Liz wasn’t, until very recently, at all satisfied with the way she looked.

“I always wanted to be taller,” she admits. “Tall girls are so graceful, so willowy. I am only five-foot, four—and only when I’m standing very straight. How could I hope to look willowy?”

She yearned for green eyes. And she hated, for awhile, her shining black hair.

At first she thought she wanted to be a blonde. And in “Little Women” she had her chance, thanks to a wig.

“Make-up wanted me to bleach my eye-brows,” she remembers, but she rebelled. “How would I have looked going around at night with coal black hair and blonde eyebrows?” So they compromised by covering her thick brows with make-up.

“They turned out bright green,” Elizabeth laughs, grimacing. “Fortunately, since the picture was in technicolor, not quite Kelly green.”

After a look at herself in “Little Women,” Liz decided she had made a mistake. It wasn’t a blonde she wanted to be after all, it was a redhead. A redhead with green eyes. There was nothing she could do about the eyes, but she could change her hair color. Again, fortunately, she first visited the make-up department and tried on a red wig. Everybody shrieked. Even Elizabeth had to admit that red hair was definitely not for her.

All her periods of rebellion were equally short-lived. They were just symptoms, really, of her pervading unhappiness, her restless discontent with life and with herself.

There was even a period when Liz “escaped” by pretending that she was much more grown-up than she was, that she was “sophisticated.” She wore clothes that everyone, including her mother, thought were much too old for her, disciplined her wonderfully unruly hair into a glamour girl up-sweep.

Michael Wilding changed all that. Michael changed everything by making it very clear from the first that he loved her just the way she was, the age she was, just for herself.

With Michael’s help Elizabeth learned that “sophistication” wasn’t even a pleasant word.

“As for false sophistication . . . there is nothing worse. Of course,” Elizabeth adds, “I would like to have more poise. But I think that will come with a few more years.

“Already,” she confides, smiling, “I’m much less shy than I used to be. It still takes me awhile to get to know people. . . . but I try. And I’ve stopped making snap judgments of people the first time I meet them. No more instantaneous crushes or, even worse, immediate dislikes.”

What Elizabeth really learned, basically, is that, to be happy, she need not be anyone but herself.

Michael, who loved her for herself, made her see that important truth. Or rediscover it.

“I really knew it long ago,” Elizabeth says. “When I was ten years old my singing teacher gave me a little gold pin. It was a musical note, B-Natural, and inscribed with a single word ‘Always.’

“It meant a great deal to me then—and still does. I still have the little pin, and I value it.”

The most important part of being natural for Elizabeth, these days, is enjoying her pregnancy, even, she insists, the unpleasant parts.

“I’m sick all the time,” she says, “and I couldn’t care less. It’s a wonderful feeling to be sick, and like it. You like it because you know what it’s for. I love all my symptoms.”

She feels like a “contented cat,” she says, “nice and warm and feminine.”

Happiness is a contagious thing. Everyone knows it who is exposed these days to this girl—the girl who has absolutely everything she could possibly want.