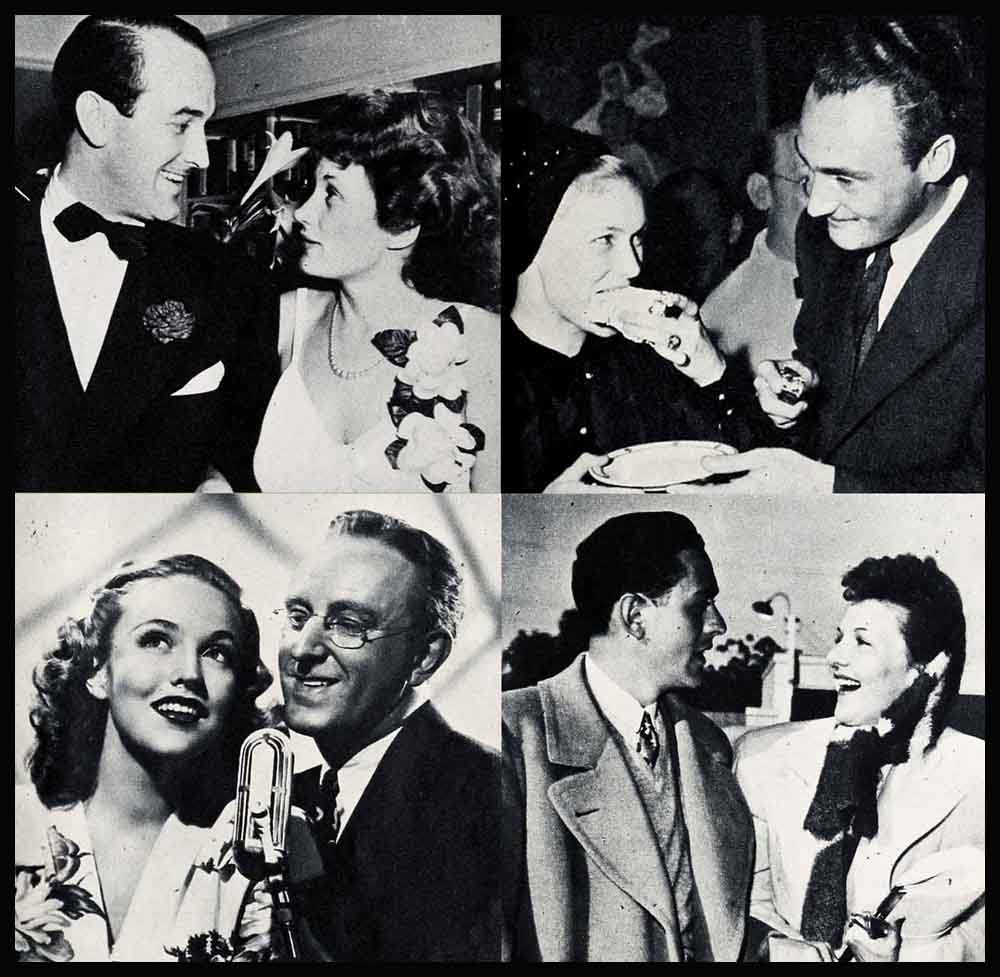 June, as if you didn’t know, is the month of brides and, of course, of bridegrooms. Of big square envelopes bearing the glad tidings and white satin and three-tiered wedding cakes and veils and tears and orange blossoms—and the truth about Hollywood weddings! About which you probably don’t know—but should. Because it’s more amusing and dramatic (and tragic sometimes) than the truth about weddings anywhere else on earth.

Not long ago Veronica Lake, entering into the blessed state with Andre De Toth, was determined to have the ceremony private. This isn’t any easy thing to accomplish when you’re a star.

Aware of the difficulties which would exist, Veronica engaged two detectives whom she supplied with a short, hand-picked list of those who were to be admitted to the Ed Gardiner grounds and home in Bel Air where the wedding took place.

As the hour of the wedding drew near Veronica was in a state. Neither her bridegroom nor the judge who was to perform the ceremony had arrived. All sorts of dire things occurred to her and her imagination was heightened finally by a great commotion downstairs. A maid came flying up to the room where she waited. The detectives had to know what to do. Two gentlemen, an Andre De Toth and a judge, were demanding admittance. Their names were not on the list. Veronica, shaking her head over her omission and any motion picture star’s chances of having a wedding go off quietly and smoothly, ordered that the groom and the man who was going to marry them be admitted at once. And, a few minutes later, the musicians played Lohengrin.

Headlines influence more Hollywood marriages than the public will ever know. Many believe the Anne Shirley-Adrian Scott nuptials were rushed ahead of the original date because Anne’s ex, Johnny Payne, married Gloria De Haven. After all, from the day Johnny got back to Hollywood from the Army reconciliation rumors were printed about him and Anne. Even though Anne knew she and Johnny s a w each other only because of their common interest in their daughter Julie, she may very well have done the feminine thing in putting her own marriage ahead—just to prove to everyone that she didn’t think for a minute that Johnny was the only pebble on the beach.

Those who should know insist the long-time romance between Cary Grant and Barbara Hutton never would have culminated in marriage if no publicity had attended it. Both were deeply in love. No doubt about that. But both also were highly intelligent people who realized how much they would have to overcome to make a go of marriage. It appears to have been Barbara’s idea—in spite of her devotion to Cary—that it would be better for them not to attempt marriage. Cary, however, who has—if possible—an even more terrific sense of pride than most males, couldn’t endure having the world believe he had courted Barbara in vain. Front page stories played Cupid in this marriage, now definitely over.

It is the night club courtships that pull up Hollywood’s divorce rate. Marriages born in noisy night clubs rarely survive the silence of the home. Couples who court at ringside tables, surrounded by the false stimulation of public places, seem to be carried away by the “glamour” of their almost nightly surroundings. When they find themselves married and alone, with hours to spend away from admiring eyes, they find little or nothing to say to each other. They discover they’re two other people and that the days are as long as the nights.

Take Judy Garland and Dave Rose, Joan Crawford and Franchot Tone, Victor Mature and Martha Kemp, Lana Turner and Steve Crane—to name a few who courted in night clubs and divorced before their wedding rings had lost that shiny look.

More often than not the incidents which arise from Hollywood weddings are amusing. Like that story about the wedding of a young contract player and a national figure. The bride rented the luxurious mink coat she wore to the wedding, according to the local furrier who is now trying to sell the coat—for its romantic fame as well as its natural beauty.

Certainly Hollywood is the number one city in elopements—and in utter strangers marrying because they get that certain feeling. Some of the strangers make brilliantly happy couples. Others make blood-thirsty adversaries. Take the fascinating case of Mary Martin. Mary and her husband, Dick Halliday, had met often at large dinner parties, each always accompanied by another; and each speaking only two words to each other, which were “Hello” and “Good-by.” One night, however, after six months of a bowing acquaintance, Dick asked Mary out to dinner alone. By the salad course he had presented her with a friendship ring (two clasped hands in silver). By dessert, he’d proposed—and she’d accepted! They eloped that night right after their coffee, and the marriage is one of the happiest in America.

Not that it didn’t have its Hollywood problems, solved by Mary in a typically Hollywood manner. The main problem was that three months after they’d married, they knew each other almost as little as they had when she received the friendship ring. She worked all day from dawn. He worked in his agency all day until late at night; and by the time he got home she was asleep for the next day’s cameras. Naturally, they became more than strangers; when their paths occasionally crossed at home they snapped at each other instead of smiling. Mary, desperately unhappy over the situation, finally asked the nearest wise man she knew—Jack Benny, with whom she was acting in a boat scene for one of their pictures.

Jack gave her the right answer to her problem, after looking thoughtfully at the boat in which they were both sitting: “Take him away where no one can bother you, and get to know each other. Take him on a chartered boat!”

The minute the picture was ended, Mary and Dick anchored off Catalina Island for two weeks and discovered they liked as well as loved each other. Their marriage has stood sound and solid ever since.

Another hasty marriage which has managed to hold together is that of one of our most famous foreign romancers and his beautiful wife. He married her originally to spite the girl who had jilted him to marry an American cowboy actor. This Romeo and his wife have been anything but ecstatically happy and for a long time each has gone his own way. Never any battles though, and they’ll probably go on as Mr. and Mrs. until the end of time. It’s easy to be polite when nobody cares.

One of the most delightful Hollywood elopement stories is that of Kay Kyser and Georgia Carroll. Kay had been suggesting marriage for some months in a roundabout way; but each time Georgia put him off in an equally round-about manner. Finally Kay decided to take vigorous action—which he certainly did.

He and Georgia were up in Santa Barbara for a show. After the show they got back into his car for the drive back to Hollywood—and then it was that something like this dialogue took place!

Kay: “I got you one—right here in the back of the car!” (Proving it with three new toothbrushes.)

Kay: “I have one for you—right here in the back of the car!” (Proving it—with a lacy blue number.)

Kay: “I have it for you—right here!” (Proving it—with a make-up kit that would warm any girl’s heart.)

Georgia: “Yes, but Kay . . . you know how hard hotel rooms are to get these days. Where would we stay?”

Kay: “I have that too—a bridal suite.”

With that Georgia said nothing more. She just looked diffidently out of the car. Deciding not to press her any more Kay stepped on the gas and headed silently for the nearest Justice of the Peace. They were bowling along, far too fast in Kay’s excitement, when a motorcop appeared out of hiding and tore after them with his siren going full blast. He roared Kay’s car over to the side of the road and advanced belligerently on them. “Just where,” he snarled, “do you two think you’re going so fast?”

Now it was Kay’s turn to stammer. ‘Well . . .” he said uneasily. Then he stopped and looked plaintively at Georgia.

And Georgia turned to look squarely at the cop. When she spoke her voice had a new decisiveness. “We are going to get married!” Which was the first admission she had made to Kay that she had accepted.

So he planted an ecstatic kiss on her, the cop melted and gave them an uproarious escort all the way to the Justice’s house . . . and here is one marriage that has all the earmarks of a happy one—typically Hollywood or not!

Sometimes Hollywood elopements which seem to be unforgivably impulsive are nothing of the kind—only a sudden climax to an old romance.

There’s Lee Bowman and Helene Rosson, who had been openly in love for two years; but whenever the subject of marriage arose they quarreled. Lee preferred living in an apartment—Helene insisted on a house. There was also the question of his career. He felt he’d have a far better chance to make the grade if he remained a romantic bachelor. On these rocks the romance finally smashed up, apparently for keeps.

For six months they saw other people but never each other. Then one night Constance Moore and Johnny Maschio gave a party and asked both Lee and Helene separately. Nobody at that party has ever forgotten what happened. Lee saw Helene across the room, and both of them stared at each other as if they were alone on a desert. Then, as if drawn by a magnet, they moved to each other and disappeared through the library door. Lee and Helene talked seriously, intensely, steadily—and that night they eloped (P.S. Not only has this been a sensationally happy marriage blessed with a recent baby, but since Lee became a husband and a father he also has become a big star; after ten years of trying. And he not only likes their house—he loves it!)

The wedding march is Hollywood’s favorite tune. Not only in June but in every month in the year starry voices rejoice to sing, “Here comes the bride. . . .”