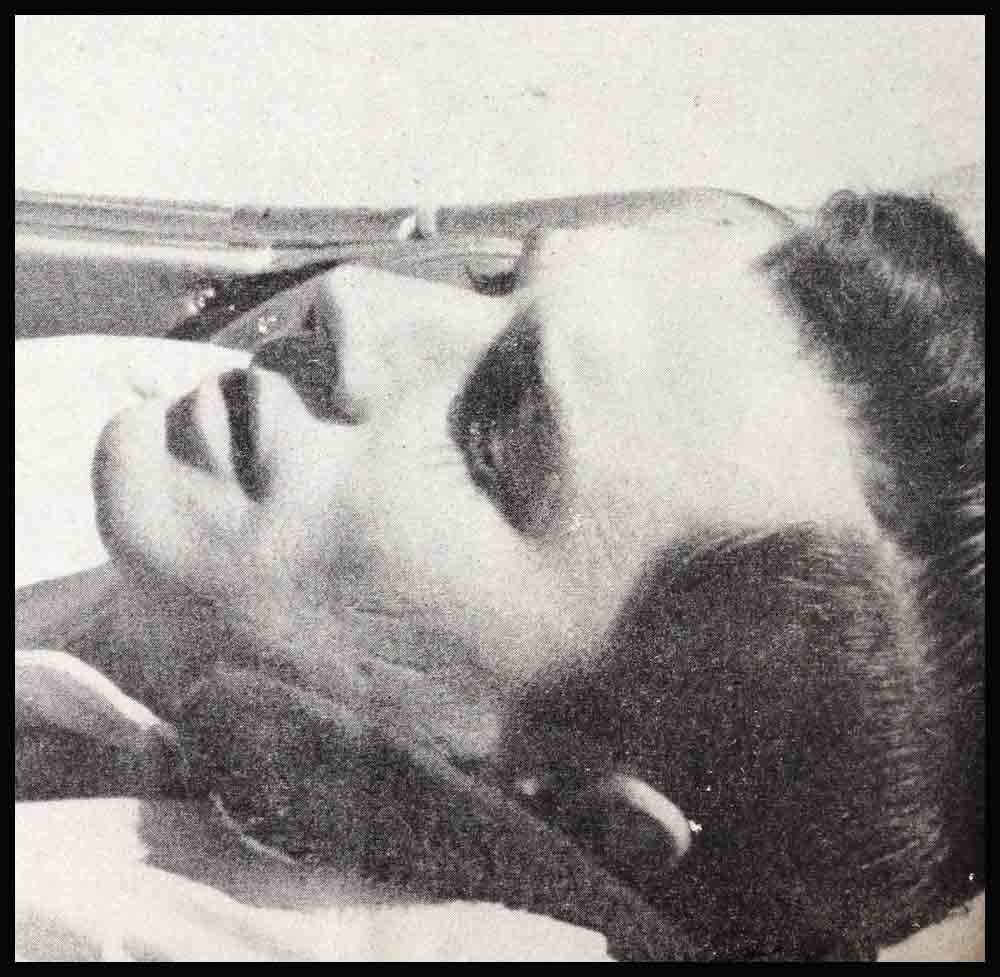 As we go to press, George Maharis is hidden away in midtown Manhattan, sick and—under doctor’s orders—secluded from friends, fans and business associates. On the verge of a relapse of hepatitis, reportedly on suspension by his studio, George is facing a crisis—the gravest double- edged crisis of his life: Both his health and his career on “Route 66” are seriously imperiled.

It all began in April, 1962, when George was rushed to the hospital with acute infectious hepatitis. This is a disease of the liver which is very often fatal. The acute kind that George had is the most serious type of the disease. A few days before his release from the hospital, in an exclusive interview, George told PHOTOPLAY that he would need lots of rest and a light schedule.

“It’s got to be that way,” George said. “Because if that schedule isn’t followed, I’ll have a relapse. And if I have a relapse, one of two things will happen.

Today, George is faced with the possibility of such a relapse.

And there are other problems. For a long time, there have been rumors that George wanted to leave “Route 66,” that he felt the series was holding him back from accepting movie and other TV offers. His contract has a little more than two years to go. Some people are now saying that he’s using his illness as an excuse to break his contract. They say he’s heading for an open fight with his studio.

Here is the story of George’s illness and the troubles with his producers, as his manager, Mimi Weber, tells it:

“Last year, when George was released from the hospital, the doctor said he’d discharge him only if he took a few weeks of complete rest and then, after that, followed a very moderate work schedule. Well, he didn’t do anything at all for three weeks. And then for two weeks he made a recording, but he only worked a total of twenty-four hours in the whole fourteen days. Then he went back to ‘Route 66.’

“That was on June 8. The doctor told him that he should only work three, four hours a day. But the first seven working days, the producers had him working eighty-nine hours and forty-five minutes. He started early every morning and finished up 4 to 5 o’clock the following morning, then he’d get a few hours’ sleep and go back. He got sick, stayed out one day and then went back.

“I won’t go into the hours he worked in every show in the series, but they were mostly like that. Some a little lighter, some a little heavier.

“This went on for months. Finally, he couldn’t take it any more and he begged the producers —Bert Leonard, Screen Gems and Lancer Productions—to give him smaller parts. They wouldn’t do it.

“George kept catching colds. Medical tests indicated he was having trouble with his Ever again. The doctor said he was heading for a relapse. The producers were warned by letter and in person, but they kept him working and he kept sliding. There were weeks of conferences and phone calls and letters.

“In October, he got sick again. His temperature kept going up to 100, 101, then back to normal. He couldn’t work, but they kept sending him telegrams ordering him to report.

“Finally, they decided to send him to a doctor of their choice. This doctor agreed with George’s doctor that he should stop work immediately. He prescribed complete seclusion and a very strong antibiotic for the fever he’d been running all week. He told us, ‘If George gets sick, he’ll get very, very sick.’

“George was in St. Louis at the time and I went down and drove him to New York. Both doctors thought the drive, away from people and ringing telephones, would do him good. We’re keeping him at a friend’s apartment in the city.

I can’t tell you where he is because he’s not allowed to speak to or see anybody but me and some members of his family.

“They’ve taken him off the antibiotics, not because he’s any better—he still has temperature —but because you can only take so many antibiotics. The doctor sees him almost daily, but he decided not to send George to the hospital, he’s afraid it would be psychologically bad for him. The main thing is that he needs lots of rest and no aggravation.

“As for the studio, they put George on suspension when he stopped working. To show good faith, they will continue to pay him his salary for the next two to five weeks. If George doesn’t get back by then, though—and I doubt that he will—I don’t know what they’ll do.

“Now they’ve appointed a specialist to see George and he’ll help decide about the hospital. Bert Leonard is sympathetic, but he has mixed emotions about all this. He thinks George wants to get out of the series. These people don’t really care. They’re business people, and they’re interested in their business.”

(This reporter called George’s studios, Screen Gems, and was told by a spokesman that he didn’t know, but he didn’t think George was on suspension. When I asked him if he could check and get the official story, he said he “didn’t want to give it that much importance.”)

“George is very unhappy now, disappointed and a little bitter,” Mimi continued. “He feels that they worked him too hard, he feels his health should have been a concern of theirs, too. It’s true, the show is holding him back. He’s in demand by the entire industry, but he can’t accept any offers because of his contract on ‘66.’ But he’ll honor his contract. He’s not asking for a release. He’s asking for nothing, absolutely nothing. Unless, of course, the doctors feel he can’t go back to work. After all, if it comes to anything, the illness is a result of his work in the series. And there is such a thing as an Act of God.”’ (Editor’s note: An Act of God is a clause in a Standard contract whereby an actor can break a contract if he becomes too ill to work.)

“If George does go back to work, they will just have to use him around his health’s schedule. It’s all up to the doctors.

“Right now. he’s in terrible pain. And he gets certain cravings. Like he’s always thirsty, he drinks a lot of fruit juices. And he tires very easily. Fatigue just completely overtakes him. Some days he can go for three. four hours and be fine. And other days he can only move around for twenty minutes and he’s exhausted.

“Complete rest will cure him, and once the liver is healed he can resume all his normal activities and never have to worry about it again. That’s why he wants to prevent a relapse. That’s why we’re not going to let them hurt him. It’s his life and the heck with everything else!

“He tries to be cheerful, but his spirit is not what it should be. He’s brooding, hurt and bitter. I’m afraid that in another day or two he’ll be climbing the walls. The thing is, he’s used to being so active. He always tells me, ‘I’m a workhorse. I never know when to stop.’ And now the bedrest is very difficult. He’s painting and reading, listening to music and watching television; and he tries to keep his sense of humor about things. Since I’m the only one he’s allowed to talk to, he calls me several times a day and tells me to change my voice so he can kid himself into thinking he’s talking to lots of people.

“But he wants to know everything that’s going on—and I’m not supposed to tell him. The doctors told me to be very careful not to upset him. The only thing to do is wait and see what develops. We may have caught it in time. We can only hope.”

What George says of this threat to his career is, “If worse comes to the worst, I can always go back to making salads at a lunch counter.”

What Mimi won’t say is that if they didn’t catch it in time, George could be- come a semi-invalid for at least a year. Or, as he apparently realizes, he could even die. And if they have caught it, in all probability he can look forward to more trouble with his studio—a real crash on “Route 66.” Whatever lies in store for George Maharis, nobody can predict the outcome of the crisis. But, like Mimi, we can only hope.